The Man Next Door: komaga and the early Japanese alternative 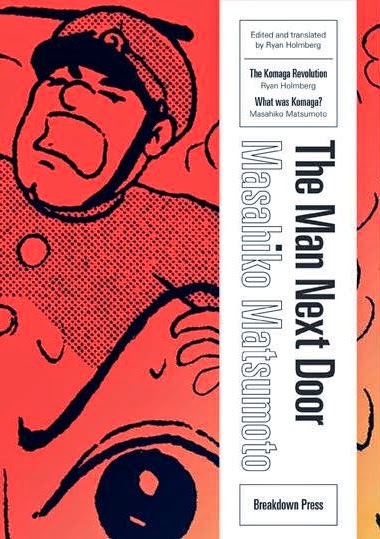 The Man Next Door by Masahiko Matsumoto, translated by Ryan Holmberg, published by Breakdown Press

Folly to attempt to write about a book so eloquently and recently discussed by both Joe McCulloch and Ryan Holmberg, but it's one I have an interest in and a few dusty thoughts about, so here goes. Please note my knowledge and understanding of Japanese comics is superficial at best, so mistakes may be made in placing historical context and subsequent discussion.

When I first started reading Japanese comics, one of the elements I couldn't get past was the intense dramatic bombast of it all. Not only were the visual aspects of say, people, exaggerated, but more often than not, the scenarios were simply left utterly loose to run with fantastical, absurd narratives.  It was like going from watching a grim British soap in Coronation Street and then switching to a Pakistani TV serial where the emotional 'background' music was relentlessly at crescendo and the speed of cuts and emphatic zoom-ins gave you vertigo. It was a matter of adjusting to cultural cues, but what helped me ease in to that vast arena was the work of Yoshihiro Tatsumi. In books such as Abandon the Old in Tokyo, The Push Man and Other Stories, Good-Bye and more, his realistic, unflinching depictions of the working class, the issues they faced, and even his own life, helped win my attention and a foothold into manga. Tatsumi is often attributed as the forefather of the 'gekiga' (literally translating to 'moving pictures' but associated with a brevity not found in the more widespread 'whimsical manga' of the time) movement, and a key figure in pushing forward the alternative comics school in Japan, which saw an embracing of greater realism in both subject and style. That standing (or perhaps due to it) has been aided by D&Q publishing much of his work in English.

This book contains four stories by Masahiko Matsumoto, an artist Tatsumi repeatedly stated he was inspired by, and whom broadly speaking, had already embarked on creating a thematic and stylistic change of direction before Tatsumi published Black Blizzard in 1956, which is viewed as an instrumental text in helping propel the gekiga movement forwards. Matsumoto called his approach 'komaga,' translating as 'panel pictures,' which explored the notion of directing action, moving the story forward via the panels, and giving import to the placement of panels next to one another to indicate time, context, emotion, significance. This collection marks the first of Matsumoto's works to be given an English language edition and Breakdown Press have done a fine job with the printing of it- the cover is beautiful- that white strip with the author and title credits is actually a belly-band, and each story is printed in a different colour: green, purple, brown and blue. I'm an uncultured oaf, so I tend to get bored quickly, but there's a short essay by Ryan Holmberg and a piece by Matsumoto (translated from 2004) both of which are illuminating and easy to understand. 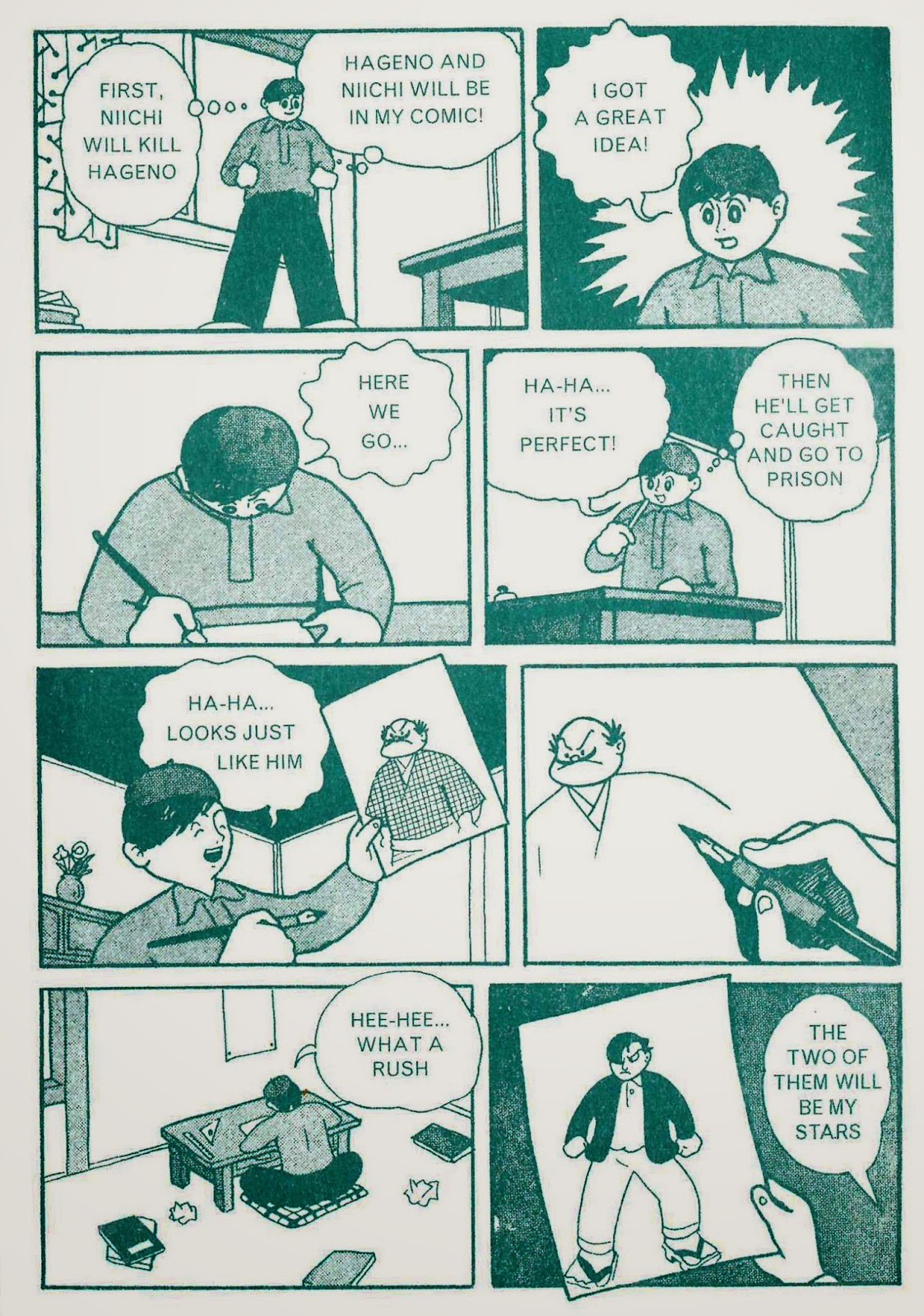 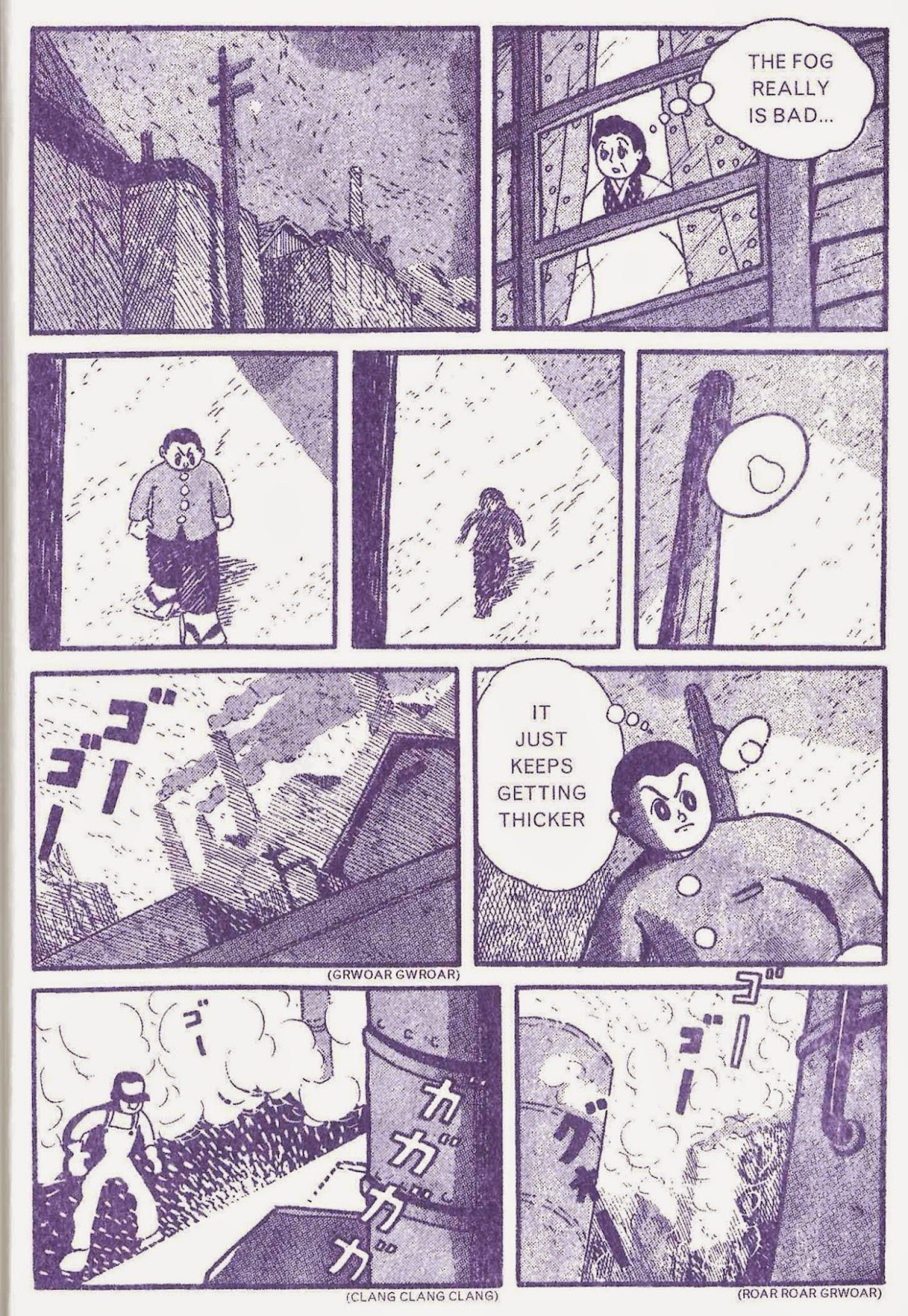 The first two stories here, The Man Next Door and Thick Fog, are rather straightforward, simple narratives that run rote and quietly subvert the expected dramatic turn or end. In The Man Next Door, the familiar frustrated young manga artist vents his feelings about his horrible neighbours through his art, killing one off, and having the other carted away for his murder. When events in real-life begin to ape his penned imaginations, he begins to wonder as to the extent of his powers. But it turns out there's a reasonable, mundane explanation for it all. Thick Fog operates similarly: a man taking a walk at night in heavy, foggy weather assumes his scissors have killed the man he sees lying on the pavement with blood oozing out from under him. Upon returning home, ready to flee at the sight of police sirens, he discovers the prone man is actually alive and well, despite having slipped and fell, shattering the bottle of red ink in his pocket. Both stories offer situations which are often used as preliminary, instigating factors in manga, from which a grand, histrionic tale is spun, but Matsumoto caps each quickly, sensibly.

The two longer comics, Incident at Shiranui Village and The Cat and the Locomotive are more interesting. Where in the introductory short comics Matsumoto ties off a particular approach, here he provides an alternative. Shiranui is a murder mystery which doesn't result in a grand unmasking, but watchful eyes and a quiet conversation on a hillside. It features a murderer who is forced to kill out of a desire to protect, and one who is found out, but allowed to walk away as the burden of living with his actions is considered a greater punishment. There's a lot to unpack there: the fact that he's gauged and recognised as someone who isn't dangerous and won't kill again, and that that judgement is made by one person alone, who won't use it to manipulate him. The realism here is derived from this personal, human interaction, the unshowy reveal and the mature manner with which it's dealt. 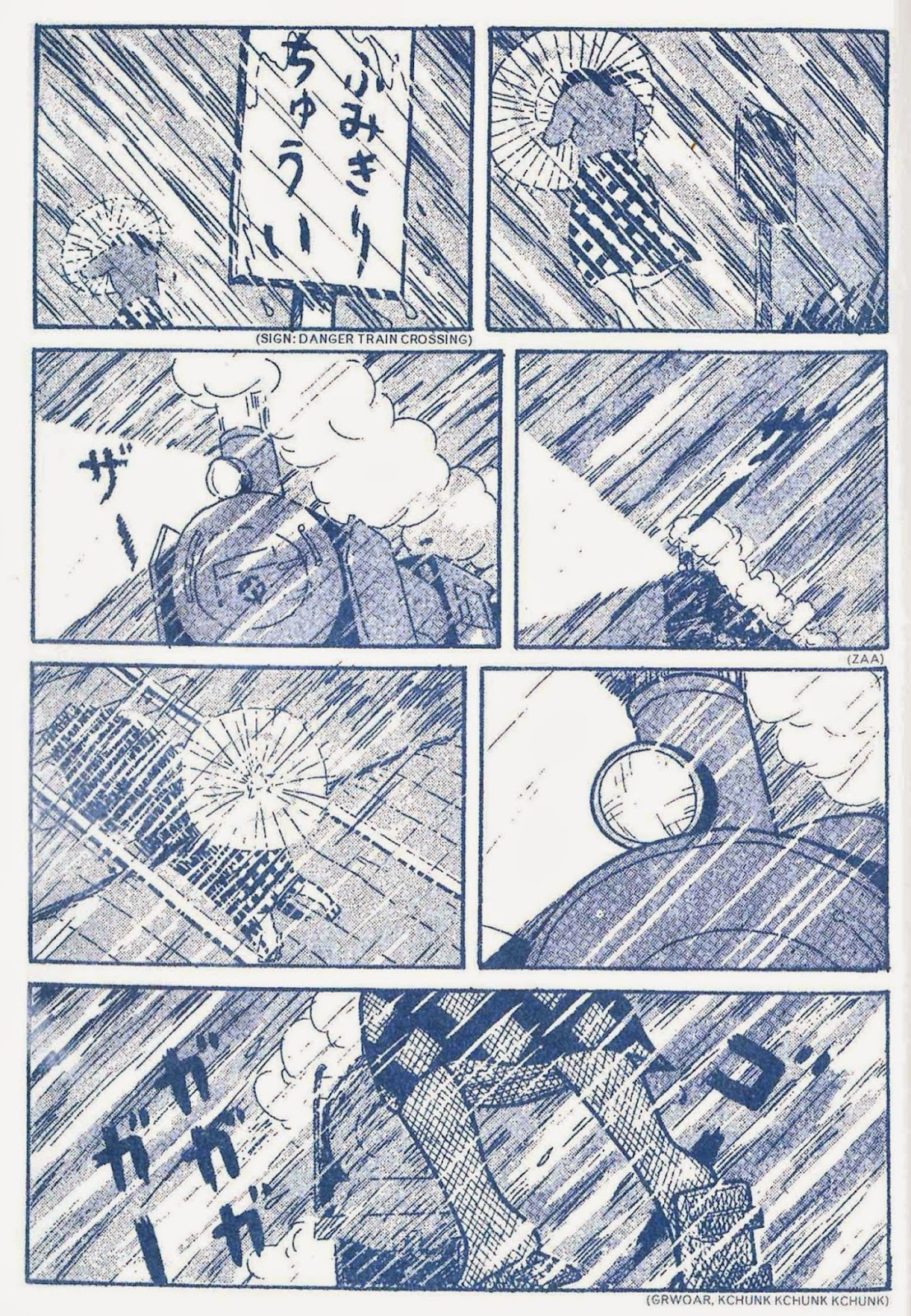 The Cat and the Locomotive is the meatiest fare in this volume, and seems the most accomplished; a grim tale that incorporates the psychological relationship between man and the self-worth he finds in his job. Again, it starts off in quasi superstitious territory- a tale of a dead woman and a black cat who were killed by a train, before veering off into obsession, guilt and suicide. Matsumoto's stylistic approach is most obvious in these longer comics- he's not as worried about figures and proportions as much as expression and composition, and it's rather fascinating to see the way he uses images in a very base, fundamental manner; a series of dominoing, narrative juxtapositions that is most apparent in The Cat and the Locomotive, perhaps because there is a lot of action and motion and time to convey. So you get panels of the train coming closer and closer, a view of the tracks from above, the lights, the rain, the signal markers: the bringing together of all the elements to produce a collective effect in relation to one another. The same message could be told within 3 panels: train, woman, tracks, but the effect wouldn't be anywhere near as impactful: the breaking down adds time and investment, emotion and energy, movement. It works very well here but I found it a bit confusing in The Incident at Shiranui Village where planted poisoning is occurring in a busy festival celebration and the number of panels showing who is doing what and which drinking bottle belongs to whom gets a bit lost. It's incredibly interesting to look at though, and see what Matsumoto's striving to do; with the benefit of retrospect, it's easy to understand Tatsumi's engagement and curiosity.

I would also like to make a note of my appreciation that these are ostensibly, supposed to be 'detective' stories. I really enjoyed this collection, not only for the stories themselves all of which present a degree of interest, but also for the first time, more for the context and in my rough understanding of where Matsumoto and his work sit in the evolution of the Japanese alternative.
Posted by Zainab at 22:12