With pound in hand: November 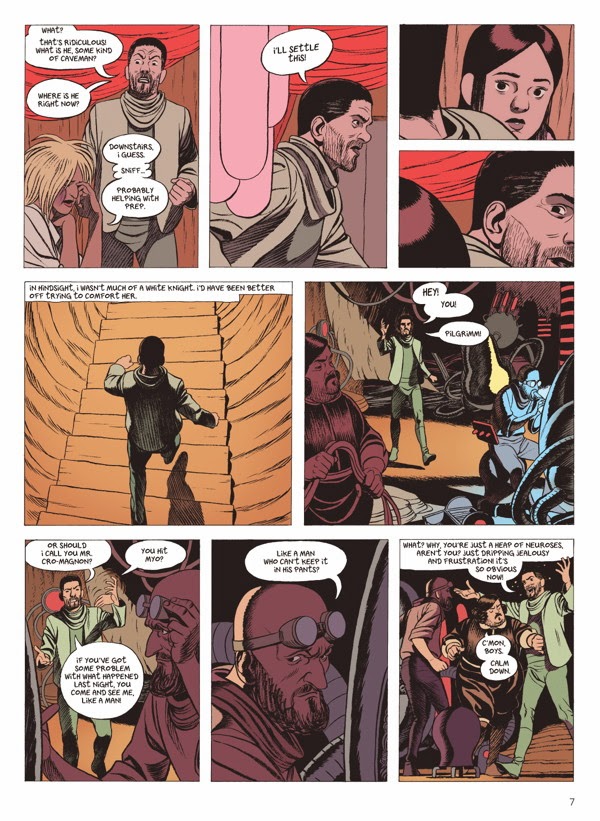 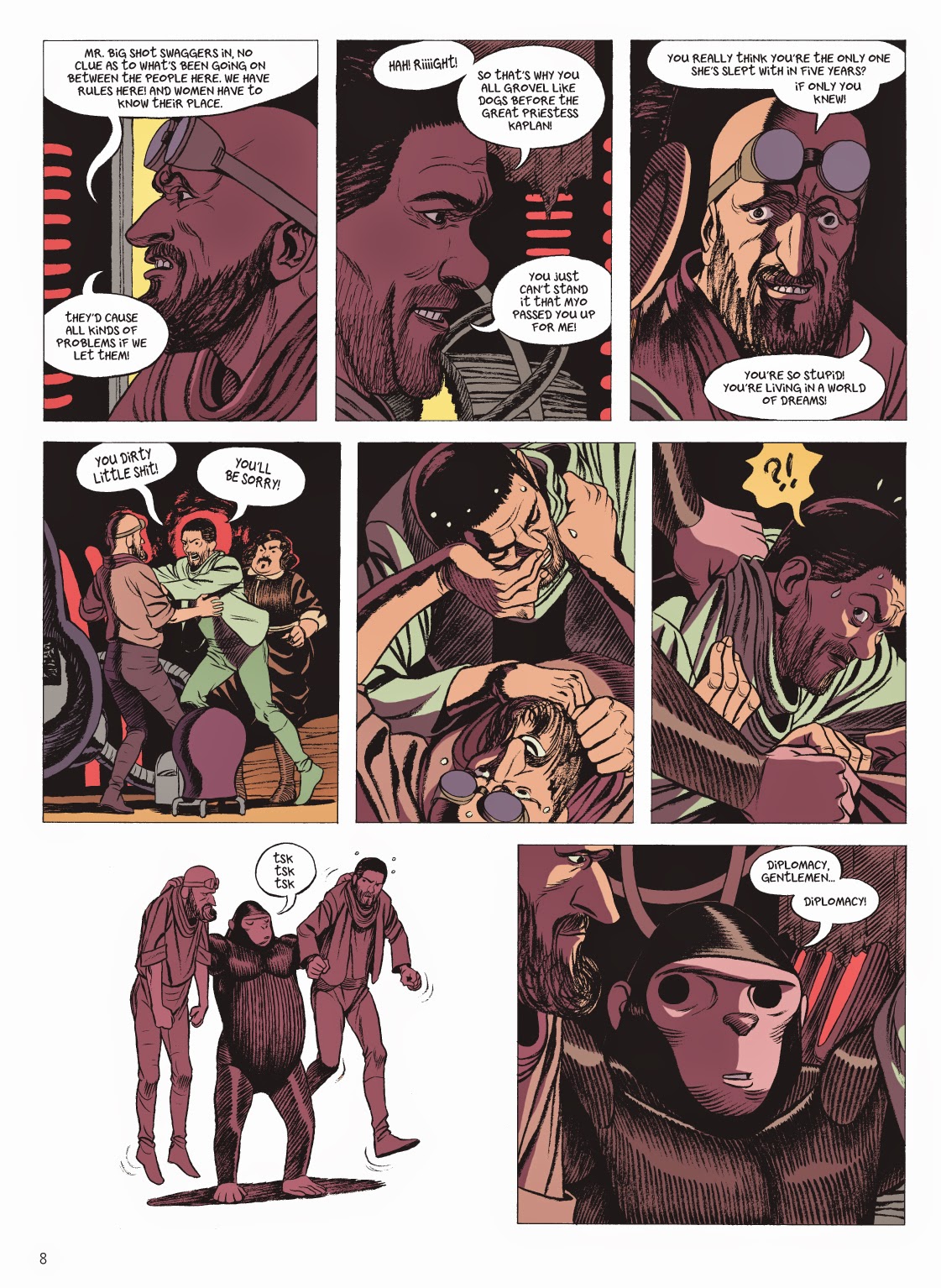 PICK OF THE MONTH: Aama 2: The Invisible Throng, Self Made Hero: The second volume of Peeters' sci-fi tale (which as Oliver and I were saying is very much an installment read, like Charles Burns' X'ed Out trilogy) depicts the continuation of Verloc Nim's reluctant space journey with his brother Conrad and the android chimpanzee, Churchill, as they search to uncover any material relating to the mysterious experiment known as Aama. Having travelled to the desert planet Ona(ji) to track down the group of scientists who were abandoned there after complications with the experiment arose, Verloc and Conrad find themselves in the middle of complex interpersonal dynamics. As they chase a rogue professor and her precious cargo, the implications of Aama and the extraordinary power it wields slowly becoming clearer. Still a bit early to see where this is going, but it looks gorgeous and is currently interesting enough to keep me on board. 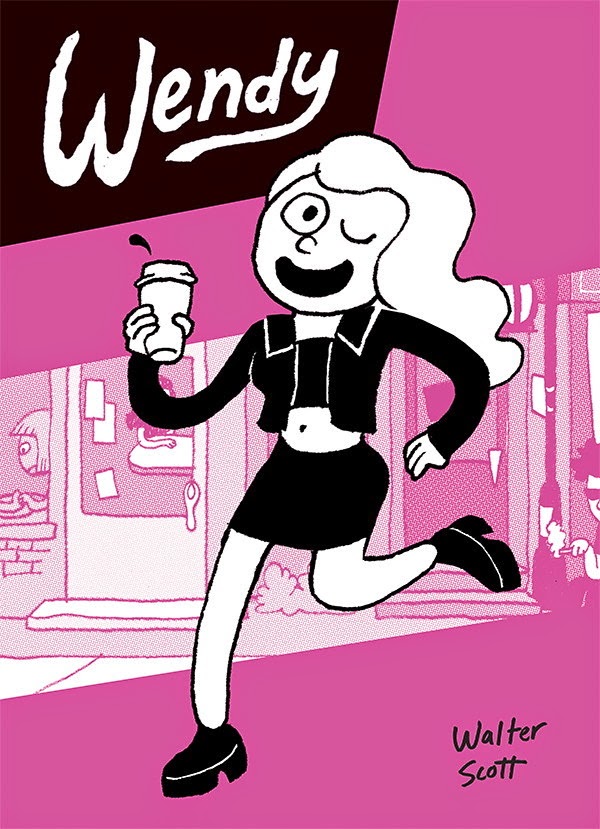 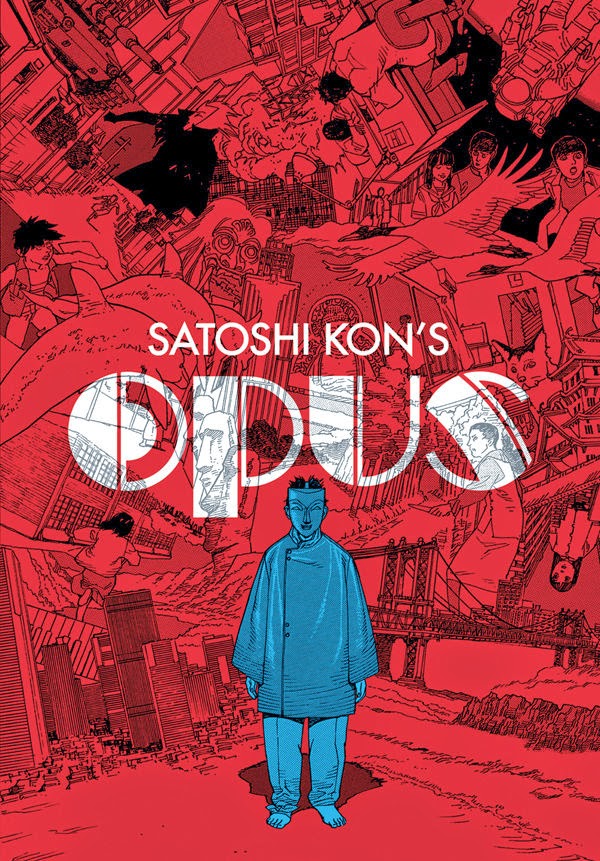 Opus by Satoshi Kon, Dark Horse: I'm so glad Dark Horse are publishing more of Satshi Kon's manga work; I liked Tropic of the Sea and am excited for bot this and Seraphim, which is due in January.o 'An omnibus collection of a two-volume manga from 1996, created by Kon on the eve of his first film, OPUS contains the mastery of both realism and surrealism that would make Kon famous in Perfect Blue. Featuring a manga artist planning a shocking surprise ending to his story gets literally pulled into his own work—to face for himself what he had planned for his characters!'

Wendy by Walter Scott, Koyama Press: Walter Scott's Wendy charts the trials of its eponymous heroine, an intelligent, 20-something, art school graduate with dreams of artistic success and stardom. Throwing a spanner in the works is Wendy's tendency to be drunk most of the time, poor decision making, and even poorer taste in men. Part satire, part gleeful revel in his character's antics, Wendy is a gradually more complex look at the art world today and its expectations on artists, but also a comment on navigating the work/play quota and life itself. 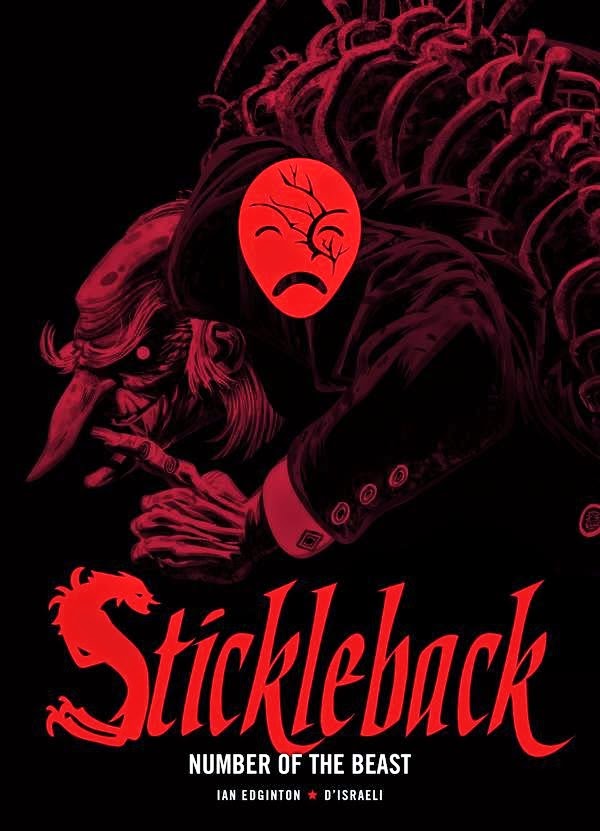 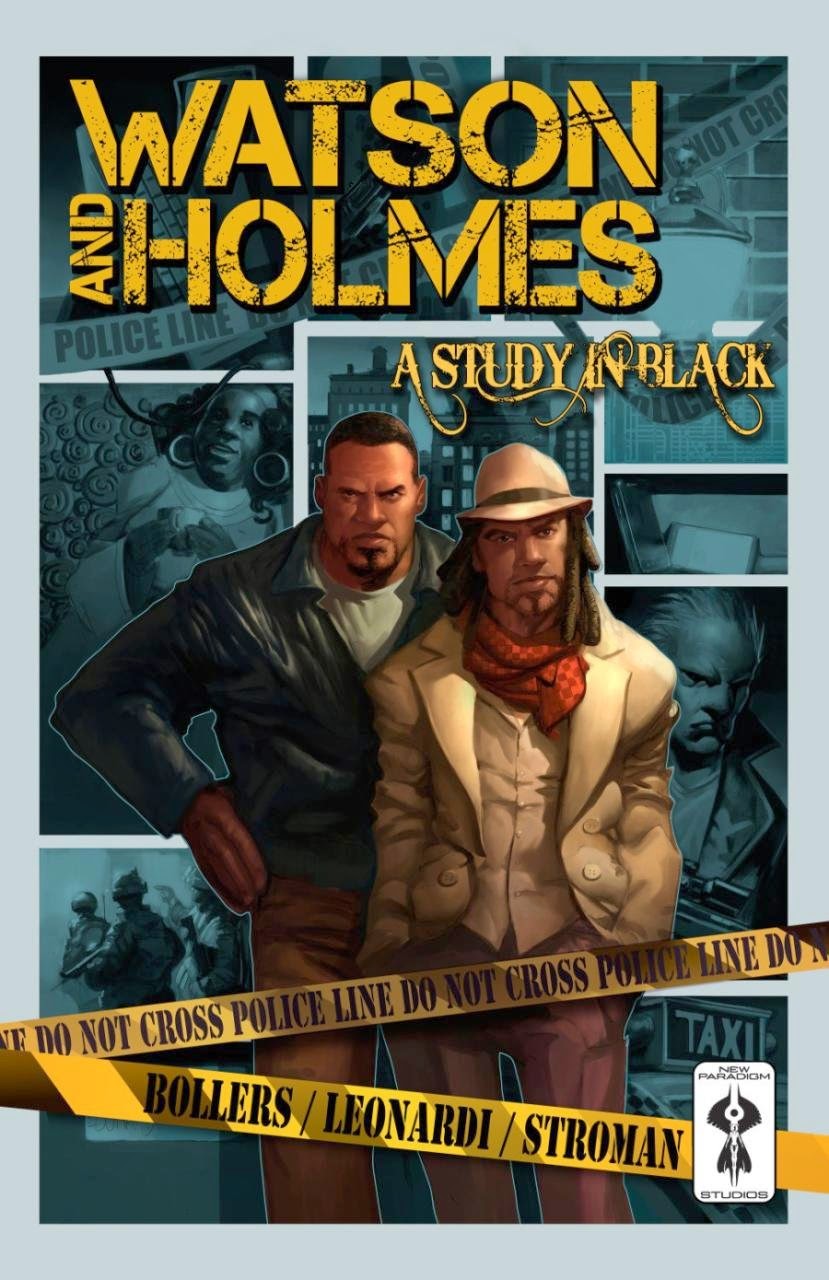 Stickleback: Number of the Beast by Ian Edginton and D'Israeli, 2000AD/Rebellion: 'London, the end of the nineteenth century, Stickleback, the Pope of Crime, rules the capital's criminal fraternity as the boss of a powerful gang of freaks, oddballs and semi-supernatural entities. But this position is far from stable and now a mysterious figure stationed on an airship soaring high above the city, is vying for power. A brutal encounter is inevitable, but one thing is for certain - live or die, Stickleback's future is going to get a whole lot more complicated!'

Watson and Holmes: a study in black by Karl Bollers, Rick Leonardi and Larry Stroman, SCB: There was a Kickstarter for this Eisner-nominated comic recently, in a bid to get a second volume funded, and I've read a lot of praise for the series. I think this is a new releases of the first trade, and I don't expect it to stay in print long, so get your hands on it while you can. 'The first African-American Sherlock Holmes series features the full first arc of Sir Arthur Conan Doyle's Sherlock Holmes and Dr. John Watson stories and the original cast of characters, now re-envisioned as African Americans living in contemporary Harlem. Watson is an Afghanistan war vet working in an inner city clinic and Holmes is a local PI who takes unusual cases. When one of those cases ends up in Watson's ER, the unlikely duo strike up a partnership to find a missing girl.' 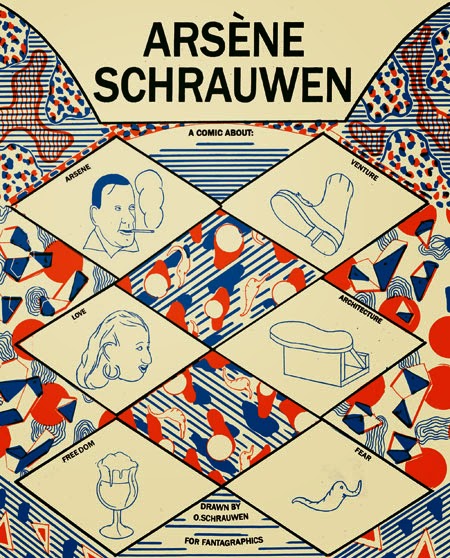 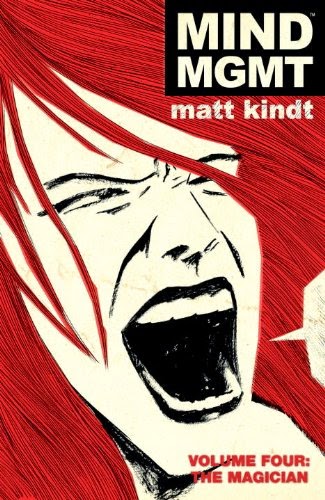 MIND MGMT vol 4 The Magician by Matt Kindt, Dark Horse: Dark Horse are really good with getting these hardback collections of Kindt's MIND series out: 'this new volume contains new storylines, new characters and an astonishing 'silent issue' with no dialogue whatsoever. Meru is back on the team, but can she ever trust Lyme again? What role did the Magician play in the Management's history of the 1960s through the 1980s? And what is the secret of the Seven Immortals?'

Arsene Shrauwen by Olivier Schrauwen, Fantagraphics: This seems to have slipped under the radar a bit, where it should be loudly touted news: a new Olivier Schrauwen book that follows the story of his grandfather as, in 1947, he travels across the ocean to a mysterious, dangerous jungle colony at the behest of his cousin. 'Together they would build something deemed impossible: a utopia of modernity, in the wilderness — but not before Arsene falls in love with his cousin's wife, Marieke. Whether delirious from love or a fever-inducing jungle virus, Arsene's loosening grip on reality is mirrored by the reader's uncertainty of what is imagined or real by Arsene.' 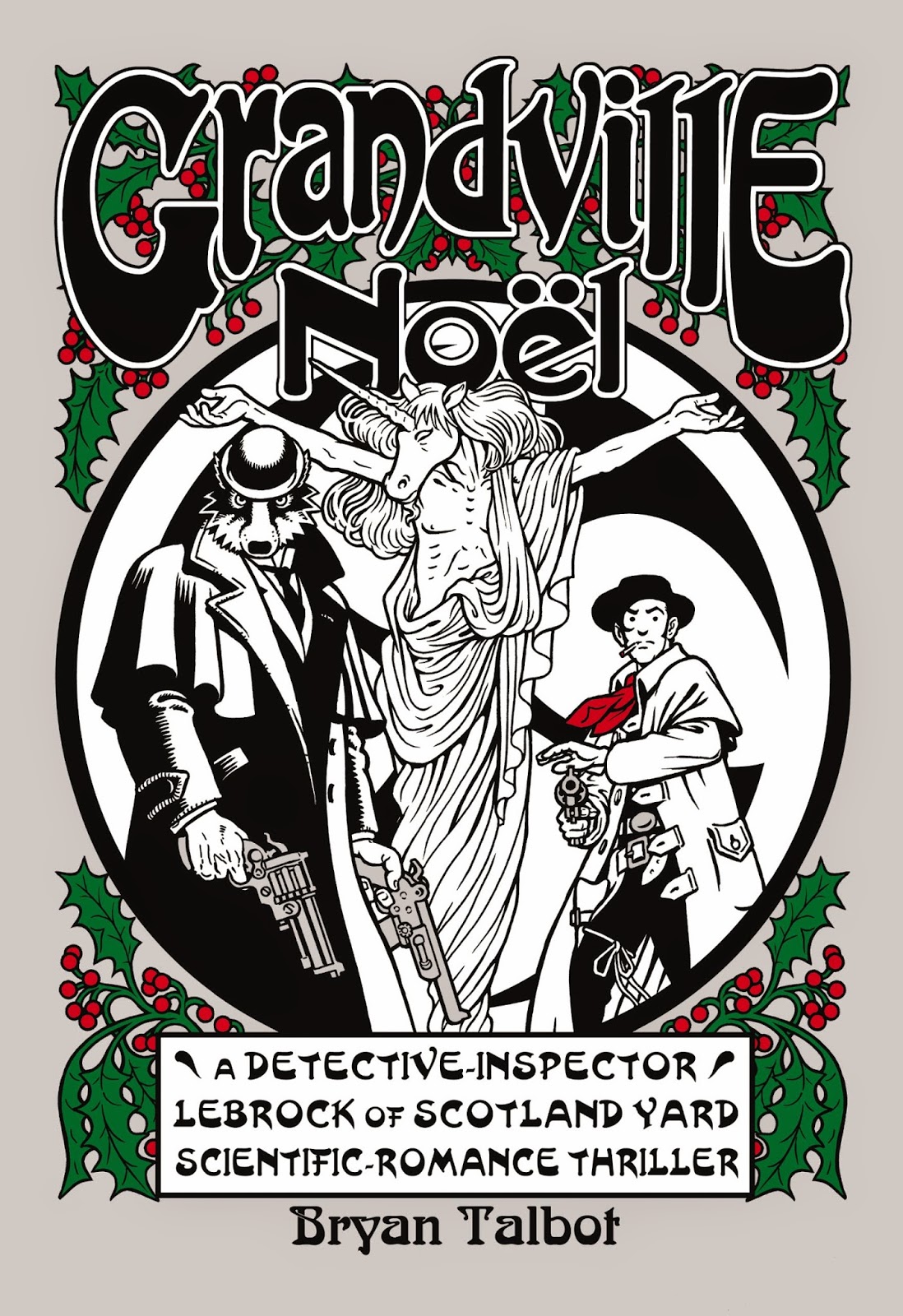 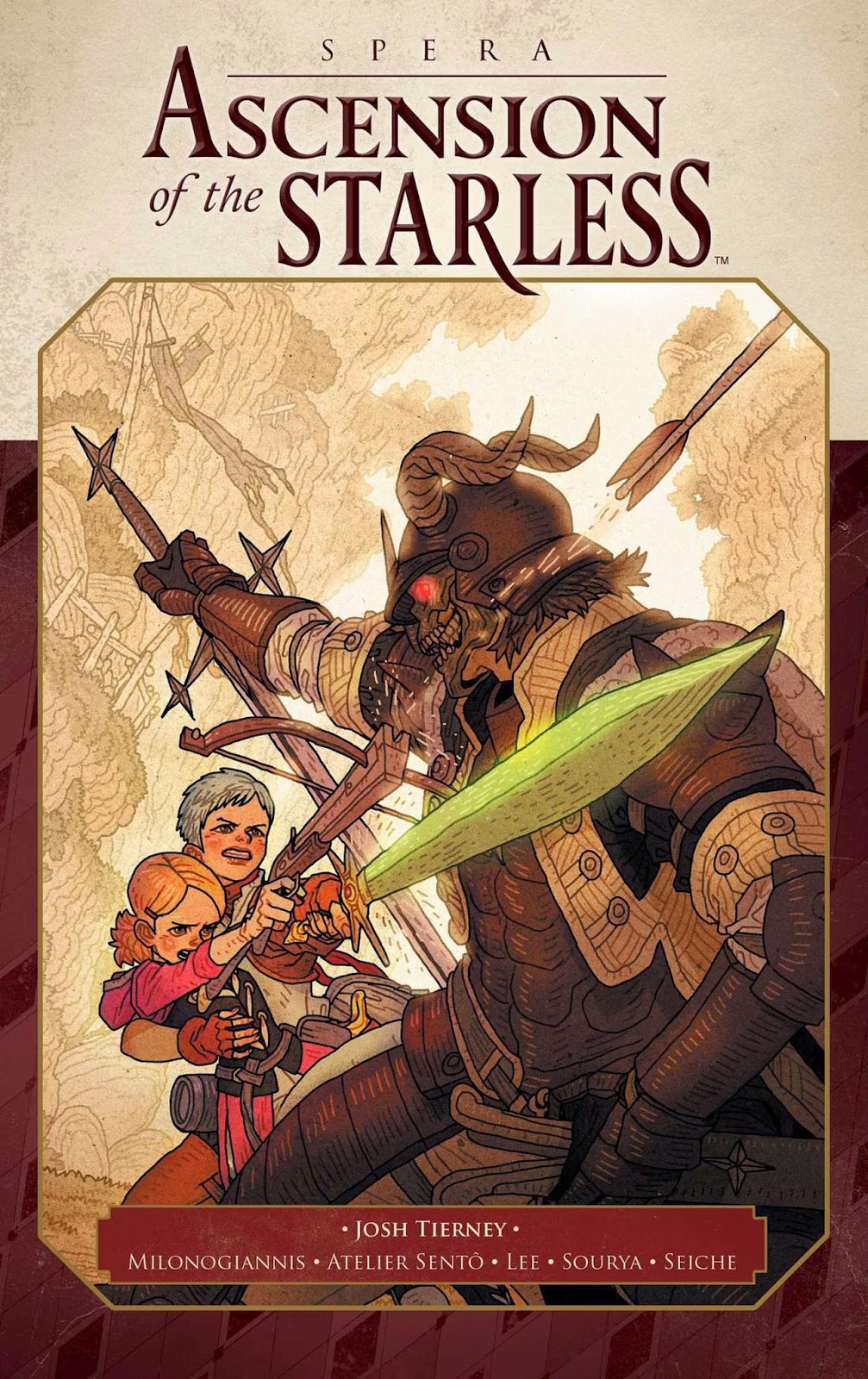 Spera Ascension of the Starless by Josh Tierny, Giannia Milonoginaais, et al, Archaia: 'After 3 volumes, Spera returns with The Starless Queen is plotting an invasion of Spera, and has sent the merciless General Zeal to secure its capital. Unfortunately for her, the Queen's obsession with killing Princesses Pira and Lono--her only daughter, and the last link to a conquered kingdom--has resulted in the pair learning of her plans through captured scouts. What began for the princesses as a hunt for treasure is now a perilous journey to warn the Speran King!'

Grandville Noel by Bryan Talbot, Jonathan Cape: Britain has its own anthropomorphic detective in the form of Bryan Talbot's Detective Inspector LeBrock of Scotland Yard, who returns for a fourth outing as he's called away from his Christmas break to embark on a new investigation. 'Teaming up with Chance Lucas, a gun-slinging operative of the Pinkerton Detective Agency, and reigniting his steamy love affair with the voluptuous Parisian badger prostitute Billie, LeBrock clashes with both cult fanatics and doughface terrorists, uncovering in the process a centuries-old religious conspiracy that threatens to plunge the world into bloody civil war.'
Posted by Zainab at 00:01