Yep, it's starting: the year end posts and lists. I enjoy both reading and writing them, so if you don't look away now. I'll have a 'best of' at some point -it's currently marinating in a rich subjectivity sauce- and am in the process of pulling together a couple of 'notable comics' pieces in the template of last years, but I thought it'd be a good idea to highlight the work of ten artists I especially enjoyed this year, so here's that. Some of these people I may have written about extensively already and some not at all: the selection requirements for this was simply whose work I'd consistently been looking at and returning to over the course of the year, and what had impressed and stayed with me. I initially had Disa Wallander on this list, too, but I hope to write about her new mini-kus, 'Remember This?' next week, and touch upon the broader aspects of her work in that piece. 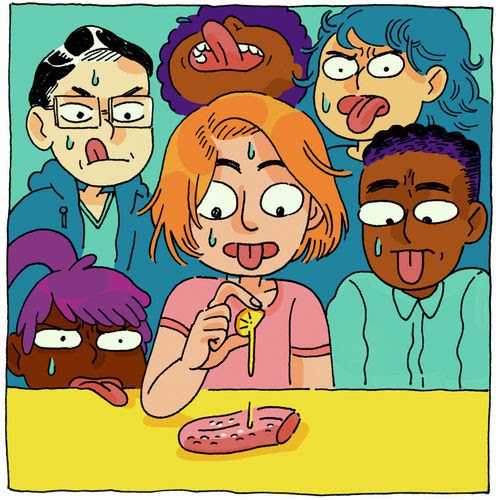 Kris Mukai: Mukai published both the excellent Commuter and The extremely small witch Bibi, who lives in Mrs Sen's garden, this year, in addition to producing illustrations and comics for various magazines and journals. I really like the energy of her work, and it's perhaps an odd thing to say but I love the way she draws people: they have a very rounded cartoony feel -although that doesn't compromise brevity when required- and the way she's able to tease out very emphatic expression and nuance from tiny. More than anything, I've appreciated her ability to make everything she draws engaging, even if it may not necessarily be attractive, and the understanding that good and 'serious' art doesn't equate to grim, tough or harrowing. I'm never tired of what she has to offer. 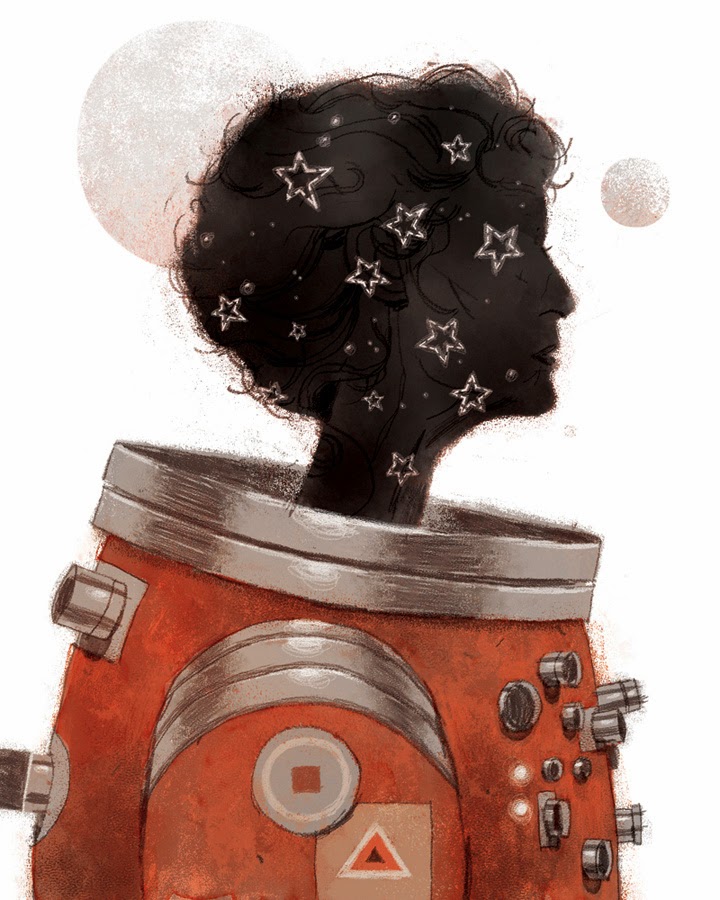 Richie Pope: It's always gratifying to come across work that is quite distinctive in style and positively so- not only does it set the artist apart, but the reader feels as if they're getting something new from the experience. While there wasn't a mass of Pope's hazy, fine, dream-like work in 2014, the quality of what was produced is indisputable. Baller was the first comic I read, although Starchild One was probably my favourite, and the new, animated Crossing was equally excellent.  I was lucky enough to get my hands on one of the very few things he published in print- Infinity Block, a series of connected drawings depicting a strange neighborhood. Even on Twitter, his 'bigot profile pics' were incisive and on-point, and both his The Lady Astronaut of Mars (above) and The Devil in America illustrations were accepted in this year's Society of Illustrators annual. Another artist on my imaginary 2015 wishlist to see more from. 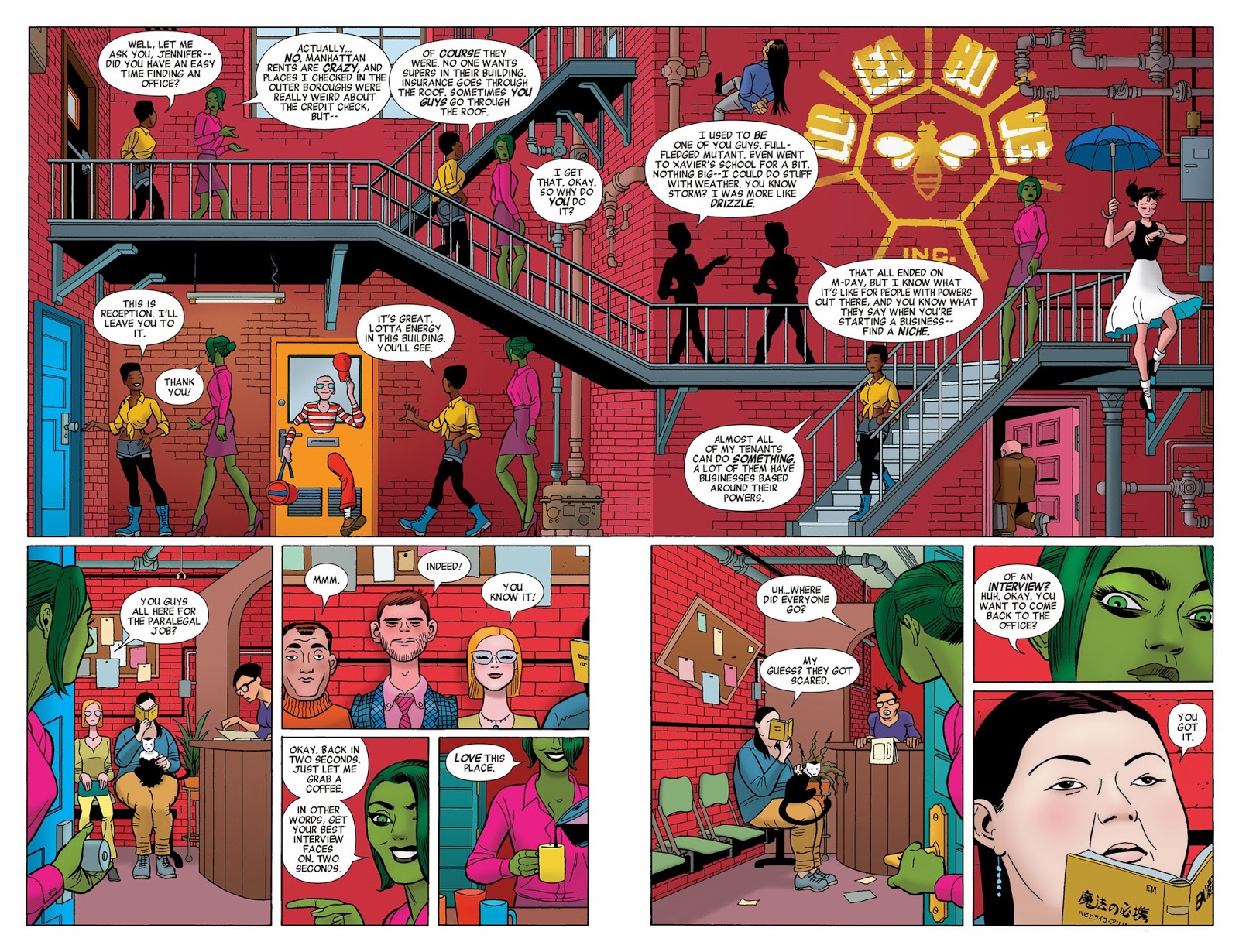 Javier Pulido: She-Hulk was my surprise of the year. I don't many serialised comics, but was tempted in by the number 1 reset and Kevin Wada's sumptuous covers. As many comics I do get round to talking about, I can't help but focus on the ones I didn't, and the Soule/Pulido run is one I really want to discuss at length soon. As solid and entertaining as Charles Soule's writing is, there's no doubt that it was the artistic team that lifted this into exceptional territory: Wada's gorgeously fashionable covers, Pulido's bold art -his layouts curious, fresh and just inventive inventive enough- and Muntsa Vincente's primary-hued colouring setting the tone and matching the subject matter they were aiming to hit beautifully. With She-Hulk cancelled, or up in the air at the least, I'll be looking to see what he does next (and crossing my fingers it's not on some sub-apr Marvel comic). 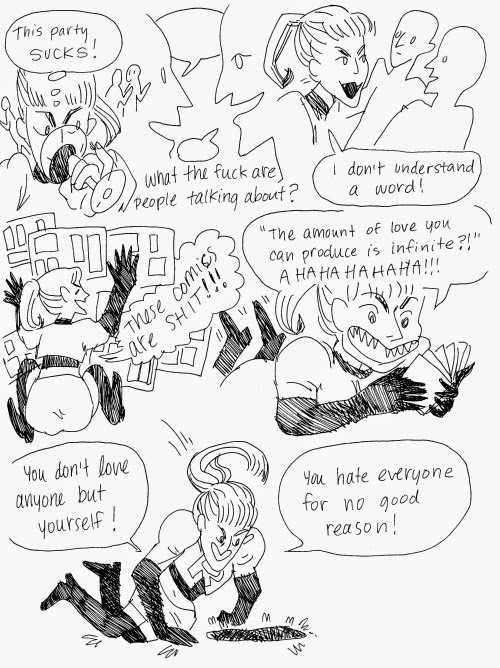 Laura Knetzger: Remember that running list of people and work I want to get around to writing about ? Well, the fantastic Laura Knetzger's been on there for a while- namely an overdue deconstruction of her excellent diary comics this year (although she is perhaps best known for her Bug Boys comics and self-portrait illustrations with pop culture icons), that have elevated the genre and set a new standard, it's layered and funny and smart and emotionally resonant and unlike a whole wedge of sad-boy auto-bio, applicable beyond one's own self. It's brilliant work on different levels: genuinely introspectively challenging and honest, whilst simultaneously asking broader questions and encompassing wider relevance. I'm really looking forward to her comic with Retrofit next year. 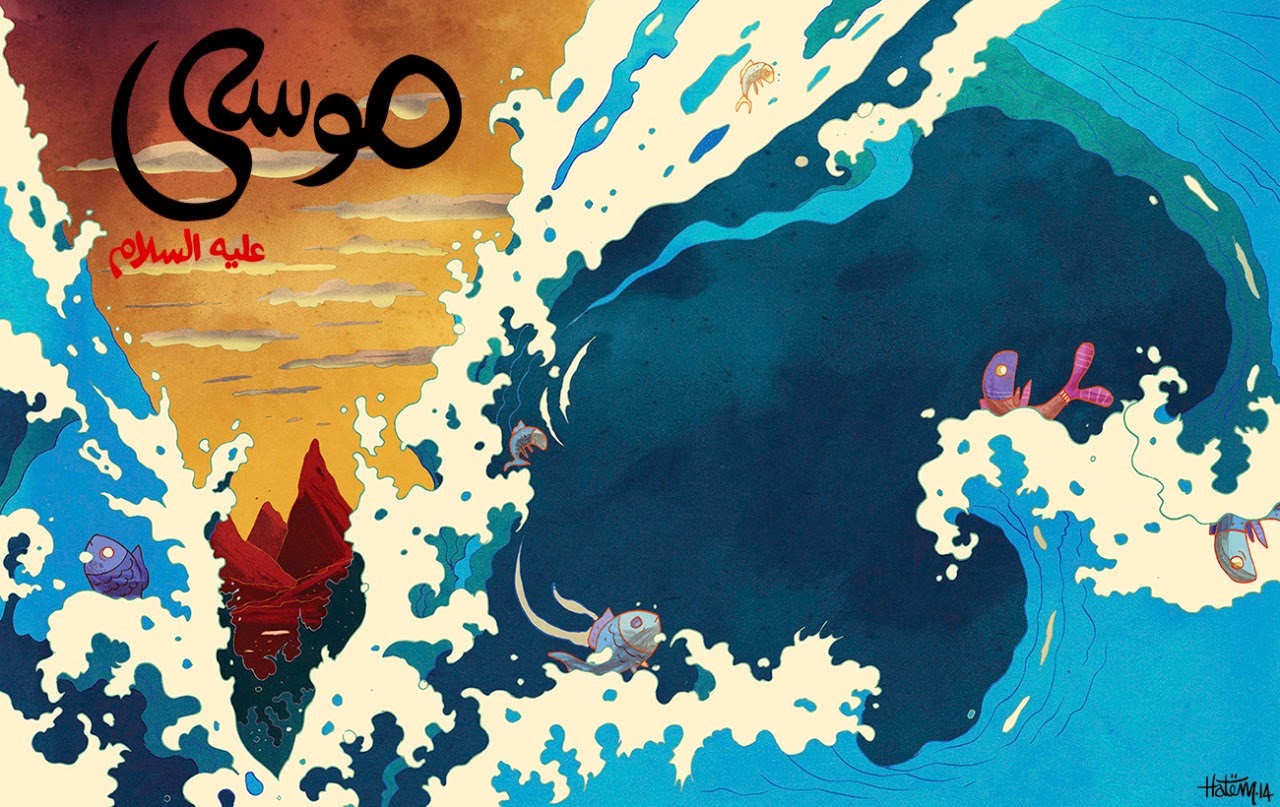 Hatem Aly: If you've not discovered Hatem Aly's art yet, you have an absolute treat in store. Not only is he very talented, one of the things that appeals to me about his work is that it's an amalgamation of cultures and influences- namely Egyptian and American, with some Muslim aspects. I love that I'm able to look at his work and recognise and see various facets of myself in it, and show it to my nephews for the same reason. His mash-up piece of Adventure Time's Marceline and singer/songwriter Maii Waleed, for example, was notable fort he use of jagged calligraphy of Arabic script emanating as lyrics and sfx from the guitar. His cover for Majid magazine was great, his inktober illustrations super, and his upcoming Moses storybook looks gorgeous. He's versatile in both subject matter and style, too, whilst still retaining the sense of ebullient joy that imbues all his work. 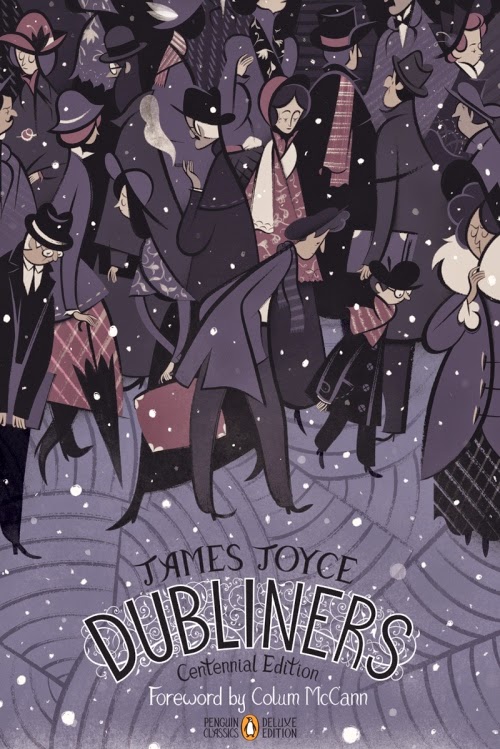 Roman Muradov: I almost didn't include Roman on this list for the same reason I didn't include Luke Pearson. While I love both their work, both of them are immense artists who have passed through somewhat to a bigger audience- although I can never tell how reflective that is in context- whether it's a result of my having followed them for a while. Nevertheless, Roman's name was one of the first I thought of when thinking whose work I'd been enjoying all year around- 2014 seems to have been a pretty busy year for him, from illustrating Tolstoy Google doodles to his book with Nobrow- his new comic Bladders, Yellow Zines, book cover illustrations, editorial work: I can't think of anyone else who has been as consistently outstanding at such a high level. And it's always a balm for the eyes- incredibly lovely to look at. 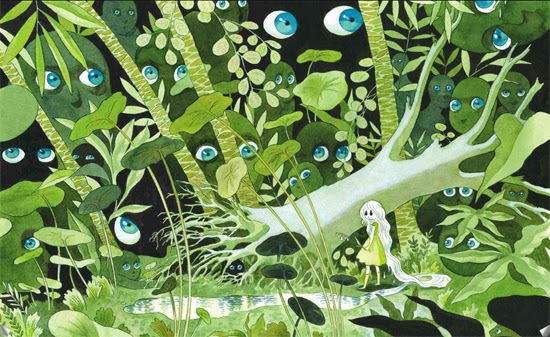 Kerascoët: This should be self-explanatory, really: it's been Marie Pommepuy and Sébastien Cosset's year. Beautiful Darkness was a resounding success and Beauty, released last month by NBM with a considerably less effective marketing campaign, is perhaps an even better, certainly more dense work. The due also released their first art-book, Paper Dolls, and have announced they'll be resuming and completing Satine (in French), which hopefully may mean we'll get to see it in English soon after. This year has perhaps marked a time where more people are aware of them, as translations are wont to do, and in addition to the afore-mentioned titles, I'd recommend checking out their earlier collaboration with Hubert, Miss Don't Touch Me, now back in print and collected in one hardback volume. 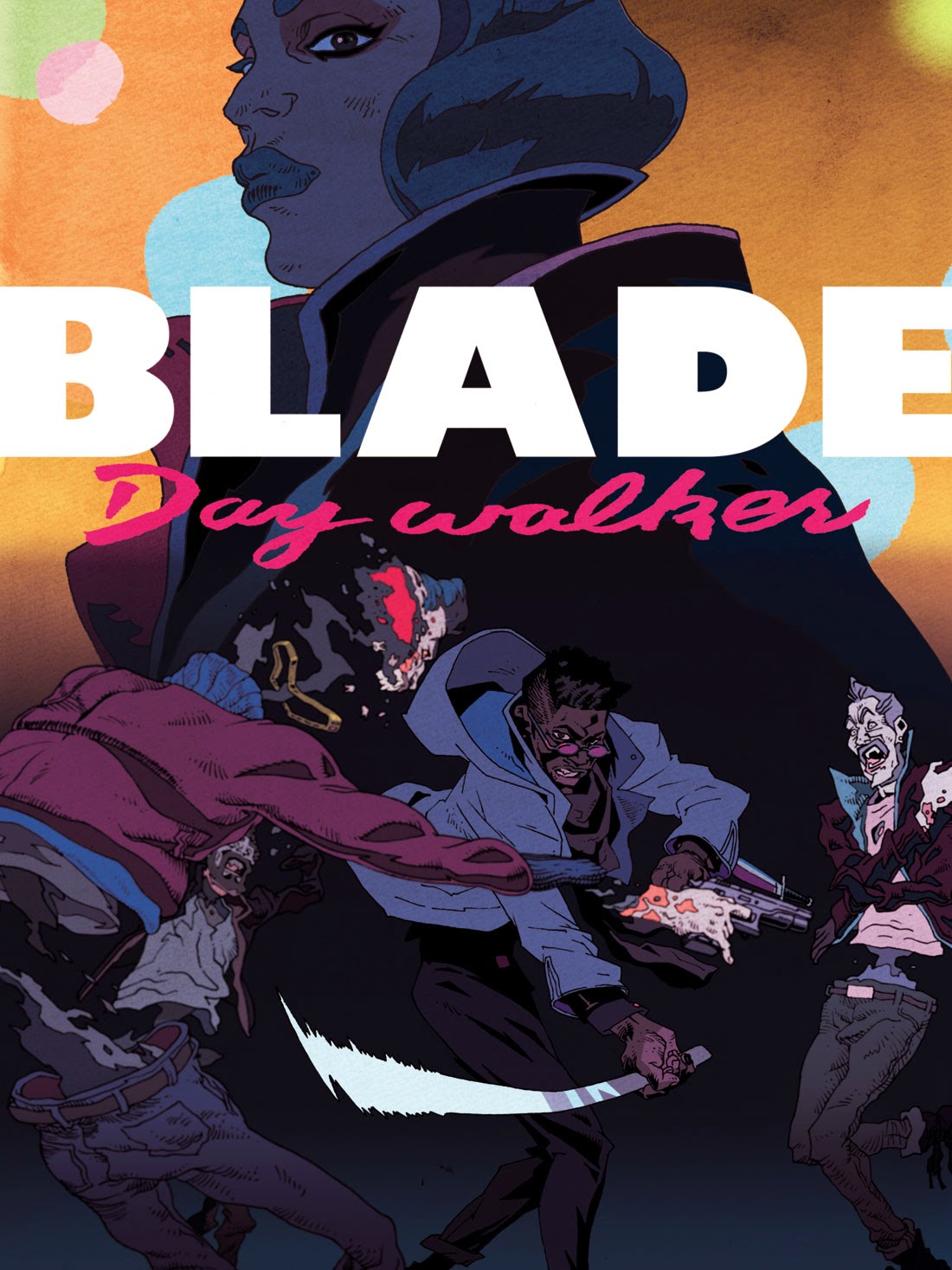 Ronald Wimberly: There was mild consternation earlier in the year when Wimberly took over art duties from Javier Pulido on She-Hulk. The objection seemed to be more with the jarring change in style and the resultant shift in tone afforded by the change-up more than anything, but if anyone's going to step in to do a couple of issues of a comic, man, you'd want it to be Ron Wimberly, wouldn't you? I love seeing his work in any capacity and appreciated and admired essentially everything he drew this year. His illustration work has been superb.: his covers fro various comics such as Dead Letters, All New Ultimates, to the Akira-inspired Lupe Fiasco  posters. Most recently, his Blade designs and concepts have a whole bunch of people yearning for that to happen -what a book that would be! 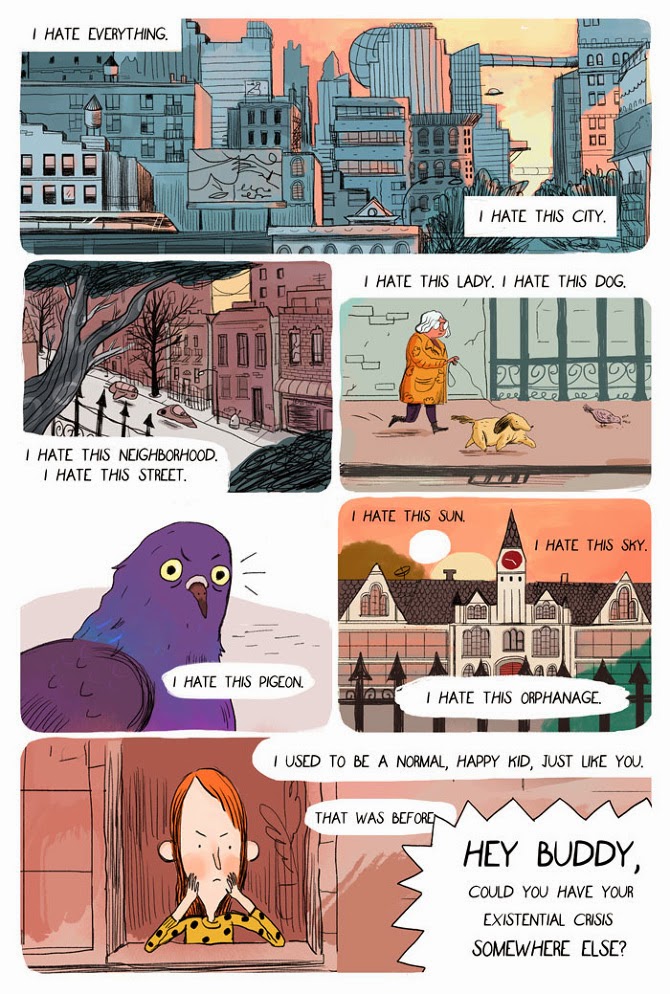 Aleks Senwald: Hands down, one of delights of the comics year has been reading Pete Toms and Aleks Sennwald's The Short Con over at the fab Study Group Comics: Pops is my new aspirational hero. The smart and zippy writing around  what seems to be an underground kids police branch is perfectly set off by Sennwald's fine, characterful lines and colours (just take a look at the cityscapes in the page above), giving the comic softer edges  and emotional depth when needed. I eagerly await each update- I just want more of this world, more of these characters, more of this lovely art, and a print version. While that alone justifies her presence on this list, it prompted me to investigate her work further and as you may expect, much of it as special. 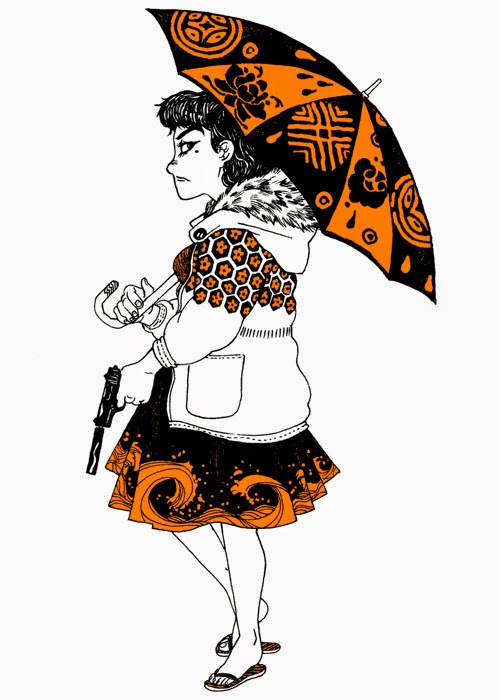 Guillaume Singelin: So much to love. I'm aware I only wrote about Singelin recently, but he's another of those artists whose work I've been exposed to online and has steadily produced throughout the year. Singelin continued to publish his frustratingly inaccessible French comic book series, The Grocery, whilst trotting out absolutely stunning concept design and illustration sets: the black and gold character series were a favourite (one of which can be seen above), and his more recent space quest drawings have been equally brilliant. I'm not making a wishes for 2015, but I hope upon hope that an English language publisher is working with him in some capacity, or looking into it. Until then, I'm very glad for the existence of Tumblr; his work and the likes of it is validate that paltform's  usefulness for me.
Posted by Zainab at 15:39