How to be Happy: the bittersweet symphony of life 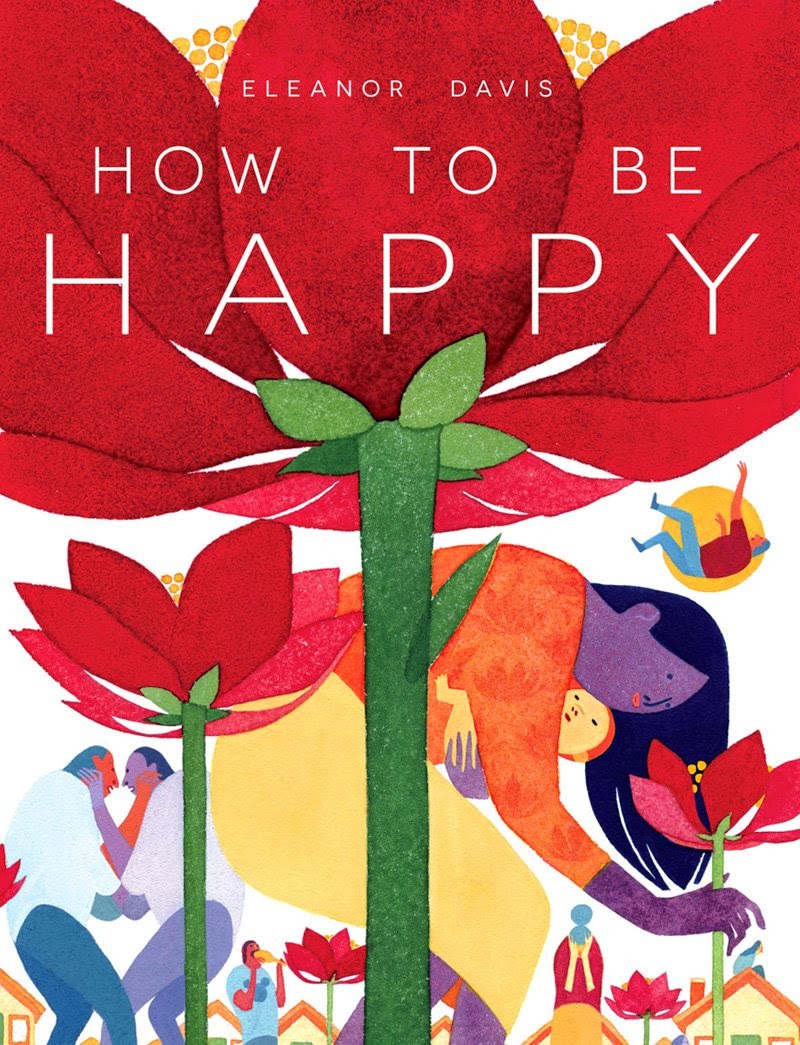 How to be Happy by Eleanor Davis, Fantagraphics:


How to be happy. It's a good title, isn't it? Instantly evokes the language of self-help/improvement guide/living manuals/whatever you want to call them, and with it the feelings you have for that particular genre: disdain, maybe. Scepticism. Ambivalence. Interest. Hope. Paired with the bright, cheery colours of Davis'c over and the foremost image of a mother picking flowers with a baby; the associations of nature and nurture and earthiness: what many would consider a bit new-age and hippy-dippy. But look closer, past the mother and child, and you'll see a man falling out of the sky, a woman clutching her head in her hands, another sat pensively on a roof, her knees to her chest, two men with their hands at each others throats- perhaps in an embrace, perhaps not.

This is the first major collection of Davis' work, and as indicated, a number of the comics within explore a string of related themes: mental health and well-being, the nature of people, the behaviour, manouvering and justification of self, social expectations, the things we tell ourselves to get by, the day-today give and take, even concerns about depletion and the environment- poisoning nature and by extension ourselves. Like the 'self-help' angle, I'm aware some of those subjects can sound very dry, particularly as they can often carry a lot of negative presumptions with them: pompous, faffy ideals, but Davis is too good a cartoonist to allow that to happen. Take the opening story, In Our Eden. In it, a group of people have moved from the city to live in a woodland, country area, with a view to leaving behind material, worldly objects and concepts, free from social constructs, to become closer to nature and one another. The leader of this commune seems to be Adam (formerly Darryl), a man who becomes increasingly extreme, dictating harsher and harsher rules: nothing industrially made is allowed, no tools, no meat, punishment for those who argue as conflict is 'unnatural' -gradually isolating the group one by one so that they leave.

The 'Eden' and 'Adam' imply connections of old: a desire to return to goodness and nature, where evil is removed, 'Before the fall was bliss,' says Adam, but that nirvana is unachievable because hestill harbours the human, where judgement and shame still exists. In a way he embodies the unholy trinity: god, satan and man: the first demanding perfection from an imperfect set-up, the second shown in menacing, silent panels in which his whole body turns a wrathful red, and yet ultimately remaining just a man and all that that encompasses. And he -man- is to blame. 'Eve' here is a secondary character, a loving, supporting companion, willing to believe in Adam and his vision until the end. Eden is coloured  in a lush, beautiful range of shades in a style reminiscent of folkloric, wood-cut prints, reinforcing the primitive natural. Eden suggests that while the people and their desire to change is well-intentioned, and practicable to a degree, if you can't first change within yourself, it doesn't really matter where you are, or how little or much you have, or how far you're willing to go. 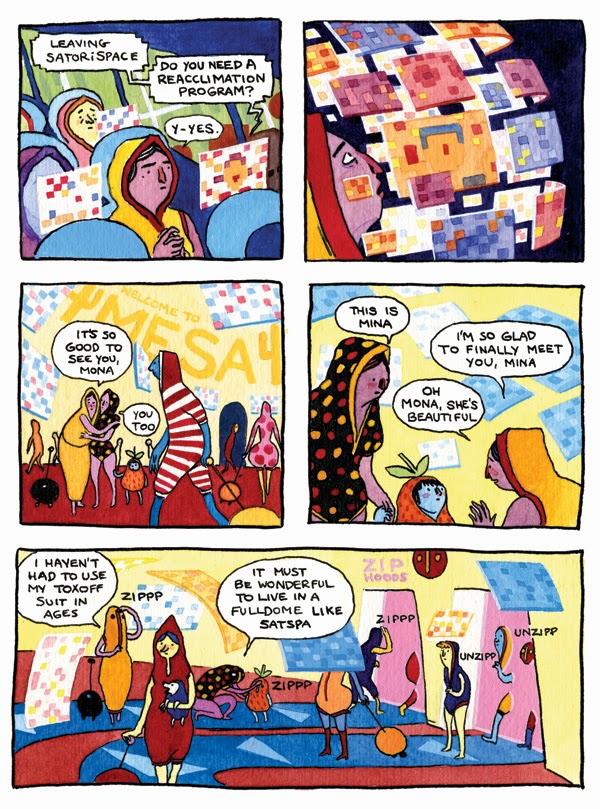 Nita Goes Home espouses similar commentary and though. In an eco-futuristic world in which healthy, green areas are sealed off from vast, poisonous, crowded slum-like cities, Nita, returns to the city in which she grew up to visit her dying father. There's tension between her Nita and her sister who still resides in the city, as Nita makes horrified comments about the harmful mass-produced food and the effect it has. She's upset when her sister points out not everyone is lucky as her and are unable to afford the much more expensive, organic fruit, seeing it as jab at her more privileged lifestyle. It's difficult not to view her as ridiculous as she weeps, 'I believe everyone should have the right to eat gais-grown!' Again, the ideal is well-intentioned, but far-off from the reality of many, many people. Nita's defensive reaction to what she perceives to be her sister's judgement, belies some of her guilt at being in a better position, but her lack of awareness is also rather galling- more so, perhaps when you consider she's from the same background. I really like the designs in this story- Davis manages to really create a unique impression of the future: a highly saturated, very rich colour palette which is a far cry from the clean, clinical blue/green/grey so often used in sci-fi, the tox-off suits which keep out poisonous fumes are robe-like- the colours, hoods and draping reminiscent of saris, whilst remaining futuristic, the floating squares of digital interfaces all around.

Nita ties together the concept of betterment through nature: in looking after nature we look after ourselves. If Eden and the past was a garden, the future is a barren techno-wasteland. The state of nature is inextricably tied to the state of humans- our future depends on preserving, retaining, or being able to replicate our resources and environment. And yet our relationship with nature has been largely destructive and exploitative. Perhaps if we were able to change that we would be able to change ourselves, or if we were able to change ourselves we would be able to change that. Davis comics then continue to explore and negotiate a holistic approach, moving on to looking into people: the emotional, spiritual. How do you deal with life? Do you feel an emptiness? How do you fill it? What gets you through each day? Are you happy? What makes you happy? Are you content? Why? What is your purpose? One of the strongest pages which struck me is a simple 4 panel comic placed in the center of a page of stark, blank white. Each panel shows the same woman at different stages in her life, getting older, facing the reader- addressing them directly:

And immediately on the next page a full page illustration of an incredibly distressed, weeping woman, clutching at her face. How are we supposed to feel towards this woman- sad that she seems to be unfulfilled, sad about her continuing search to find something, anything that gives here a sense of anchorage and purpose, or is it okay that at different stages she looks to different things to help her get by. Are we supposed to judge or understand? Is it okay or scary to think that perhaps meaning is never really found, and what is the appropriate response to that? The repetition of her statements replicates self-help mantras- the idea that people are told to stand in front of the mirror and repeat affirming statements to boost confidence and belief- like rolling beads, the more you repeat and roll the more tangible and embedded it becomes. Repetition is used for emphasis, to reiterate, and yet there is something unsure and unconvincing in the woman's speech. Davis asks these questions throughout in the shorter comics- who has things figured out? Is there a universal nirvana to which we must all work towards? Why should it cause so much pain? It should be okay to not be okay, to not be there, or any particular place.  What is this idea that's being sold to us-  the notion of happiness as the ultimate pinnacle to be reached is a false one. Do what you have to do to get by, however small, however pathetic it may seem to others. It hurts to read this book. 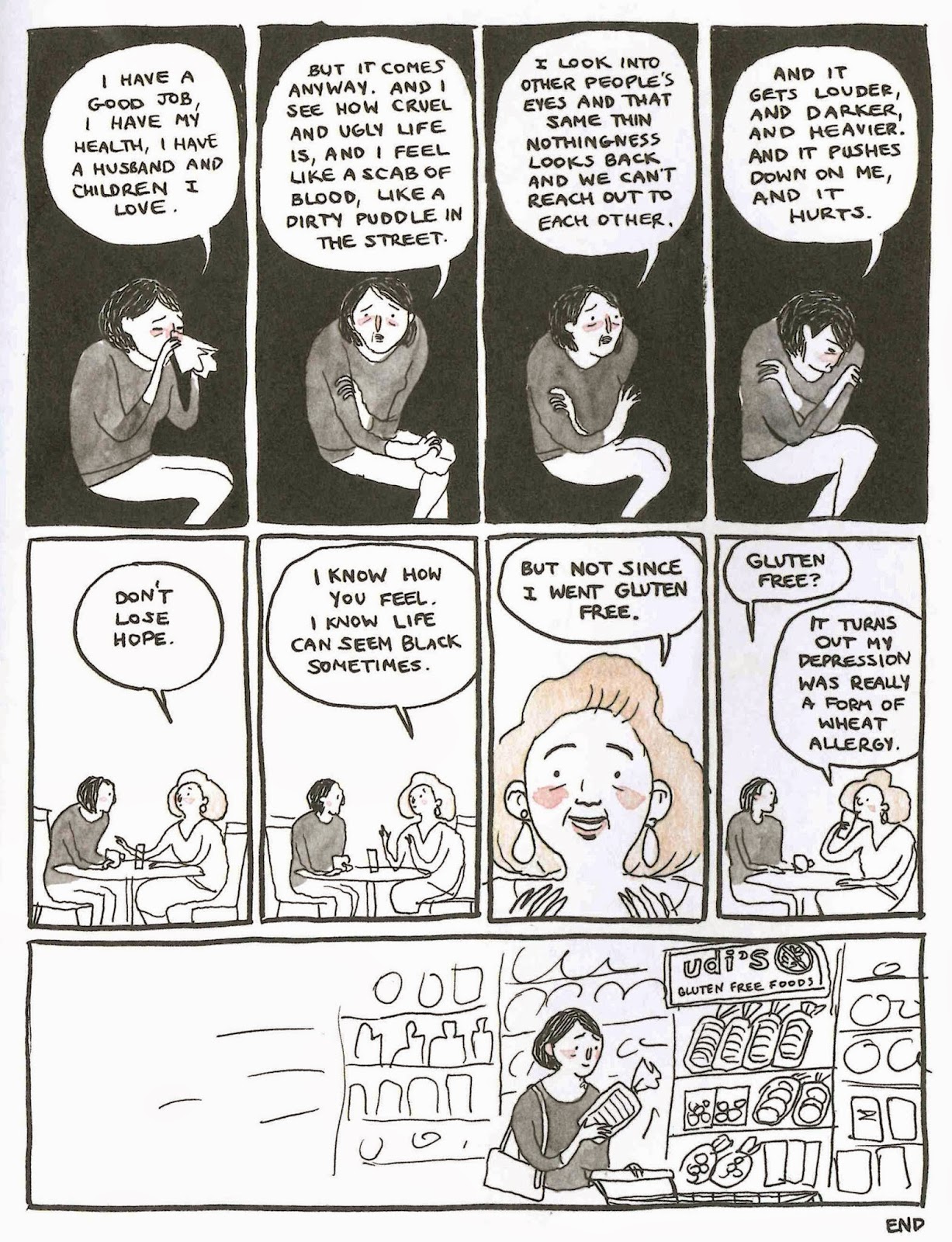 If you've never come across Davis' work before, Happy shows off her artistic prowess splendidly- she's able to draw really well in a range of styles, and uses colour and shape so cleverly. Two of the other comics I'd like to mention here are Stick and String, and Seven Sacks, both of which are more folk fable in strain. Stick and String is gorgeous, the brown and orange tones lovely and et off by the looser style. A man wanders through the woods playing his ukulele, the flowy musical bubbles wafting from his instrument. And then he comes across something strange: a group of strange, wild beasts- semi-human- playing their own music and dancing around a fire. He's drawn to one of these- a female, whom he lures out and into his home via his ukulele. 'Bed,' he points. 'Window.' 'Rafters.' he cooks for her, and then plays some music while she dances. They have sex and falls asleep, but he's awoken by the sounds of her clawing at the walls in distress; she feels literally boxed in and trapped. there is an oft-quoted line from Antoine de Saint-Exupery's the little Prince- 'You are responsible, forever, for what you tame.' The man plays his ukulele to calm her and she falls asleep once more on his chest, the closing, tired, dawning expression on his face as he realises that this is what he must maintain if he hopes to keep her, to 'tame' her. But it is he that wanted her, he that removed her from her happy home and natural environment and now he's stuck, resentful. That quote could easily be applied to man's exertion of dominance over nature.

Davis employs a similar style and colour palette for Seven Sacks, another story heavily fable-ish in tone. A boatman is asked by a skunk-like rodent creature to take him and his load across the river. He does so, they make small talk, and after a pleasant trip, he returns to find another even curiouser passenger waiting, clawed and upright, but wearing a large bird pelt that covers his face and shoulders. He too, has a load in bag, but his is squirming and alive -'rabbits,' he says- and he delivers swift kicks to it as the boatman takes him across the river uneasily.  this back and forth continues, with the boatman making several trips, his passengers growing stranger, larger, their loads bigger. The man suspects more, suspects worse, but carries on taking the money he is offered to do his job, purposely remaining blind to the sinister implications of what's occurring. On the last page, he stands still for a moment looking out to the horizon, his oar at rest 'rabbits' he things. And then again, this time with a full-stop and finality, 'rabbits.' as he pushes off, deciding to believe in the lie. The creatures are all easily identifiable as grotesque, monsterish, inhuman. is the man to be praised for not judging them by their appearance, not making presumptions about their sacks and loads or should he have acted on his strong suspicions.

I could praise what Davis achieves in this book all day- it's as fine comicking as you could hope to come across: the enmeshing of wonderful art with good, strong narrative that naturally prompts and drives discussion and thought without it feeling overt or jaggedly superficial, is superb. Exceptional cartooning is when those elements come together in a cohesive manner, and Davis' work is on that plane. I haven't come across any comics that raise similar themes and ideas and yet How to be Happy is widely, deeply applicable and resonant. It works and works and works some more. For many people this volume will be their introduction to Elenaor Davis' work; I can't imagine anyone coming away unimpressed. 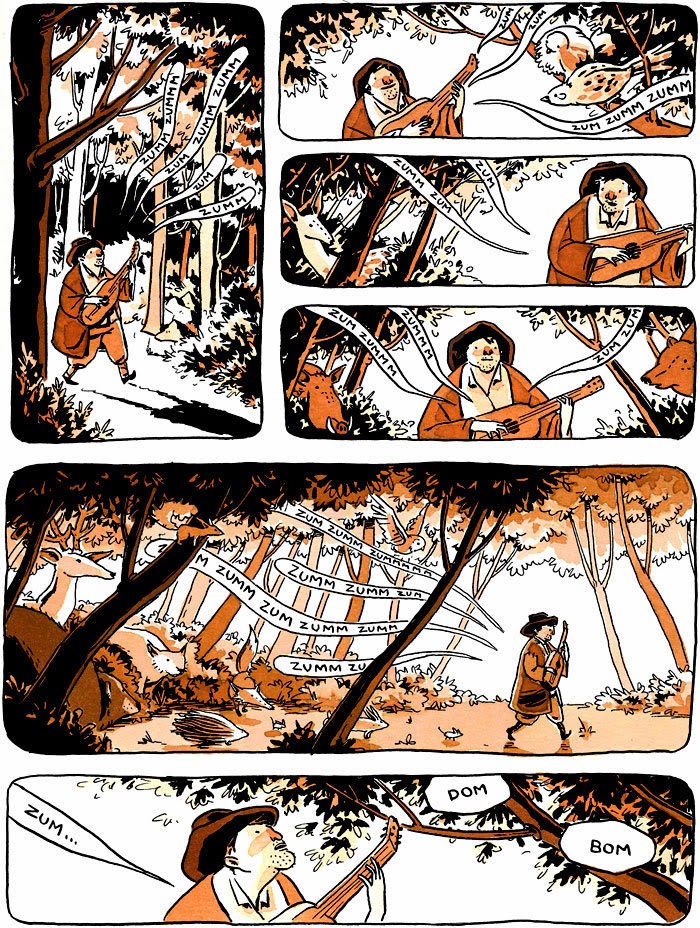