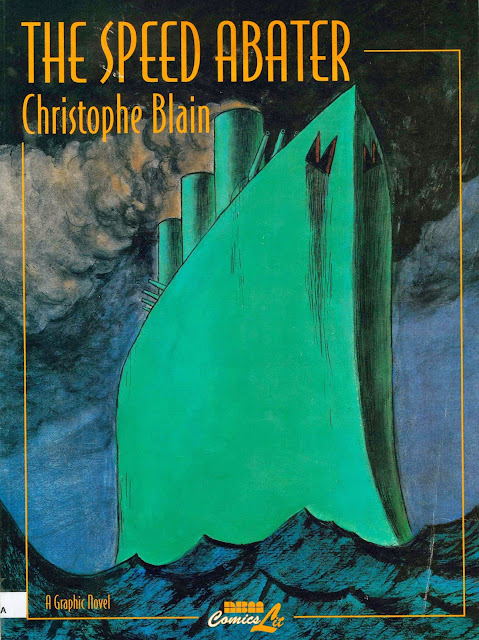 One of my favourite exercises in writing about comics is to pull panels from comics and just talk about them loosely (hence the take 3 panels feature). I find I don't re-read comics in a whole manner, i.e. sitting down with a book and going through it cover-to-cover once more, but often sit at my bookshelves pulling various things off and looking through texts in parts, minus the emphasis to take in everything at once and get to the story; this is when I tend to notice more, and when my appreciation of a work deepens. For me this approach works, particularly in relation to the art, because my mind's not really in operating within the confines of 'reading mode'- it's more open and loose and receptive. So in that vein, I thought I would talk a little about Christophe Blain's The Speed Abater - some of the passages and panels that interested me.

The Speed Abater, released by NBM in 2003, was Blain's first work to be made available in the English language and it's quite the introduction. Unusually for US and North American publishers, it was printed in the original, large format album size so you get to appreciate Blain's art in all it's glory; in addition to it mirroring the scale and vastness of the ship, it also brings to the fore the nuances of cabin fever, paranoia, claustrophobia and the imagination. The Speed Abater follows young oceanographer George Guilbert as he embarks on his maiden voyage aboard the legendary battleship Bellicose, having volunteered as a helmsman for the French navy. George makes friends with Sam and Loius both of whom are also new sailors, and the three become sea-sick and unable to do much. They decide to travel to the bowels of the ship (despite this being a forbidden, restricted area) where apparently the motion of the ship isn't felt as much, but end up getting lost and stuck as they wander deeper and deeper into the mass of humming machinery. It's a curious, slightly odd, sweet, but really good book -very specific, in a way- and one that rewards multiple readings- especially on the illustrative front, as is usually the case with Blain. 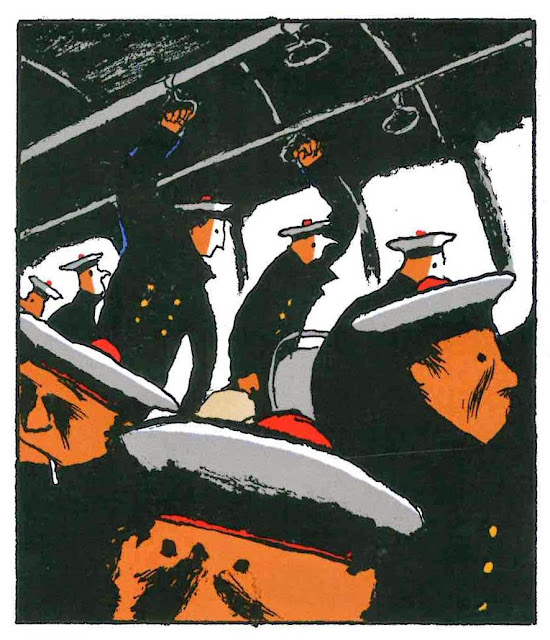 The Speed Abater is book-ended with two short passages of life ashore, sandwiched between the pressure cooker events aboard the ship itself: beginning calmly with normality and ending that way, and thrusting even more of a weird, strange, hallucinatory aspect on the time spent on the ship. This panel shows a group of sailors -navy officers- riding a bus into the docks. Bound together bu the dark blue, white, red and gold of the uniforms, there's an air of relaxed, quiet camaraderie as they peer out of the windows to catch a glimpse of the ship and sea. The perspective of the panel is angled so you get a look at a bunch of faces: the way they're all leaning forward slightly in anticipation, looking outwards, the morning light shining in on them favourably, while the white space lends a feeling of crispness, freshness and possibility. I love the touch of the man in the lower-left corner, a cigarette drooping from his mouth as he looks in the opposite direction: the flat line of his mouth (the only mouth in this panel, despite the presence of seven other faces), and the manner in which the black around his eyes is painted to give him a more grizzled, sea-dog type appearance. he offers some contrast in comparison to the eager, wide-eyed appearance of the others, 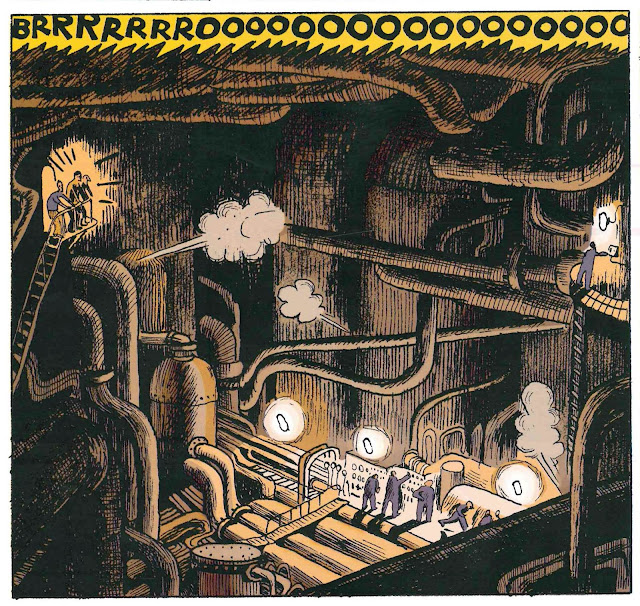 I have two favourite books set on ships (it's a rather specific thing)-  Ian Edginton and D'Israeli's Leviathan, and this. Both manage to convey the monumental size of the engines, the scale of pipes and machines, the heat and grime, the noise, the knots of metal, the atmosphere. Much like spacecraft in sci-fi films like Alien, the ship here is a character in itself, and these are the innards; the belly of the beast which set the tone of what's to come as the men become lost and confused, delving further into their psyches. Blain's gone hatching happy in this panel: it's the first time the men are seeing below deck and the combination of impressive grandeur and realistic depiction is on point- all twisty, bronze pipes, looming space, steam and shade.

One of the primary things associated with Blain's work is his movement and energy; much of that is down to his lines which are fast, loose, but a measure of it is also down to smaller, stylistic additions- motion indicators, sfx, and clouds. He uses clouds to convey a range of emotions, but here the simple few surprise/shock lines around the men's heads at the top, and the three clouds of gas/steam give the  whole panel another dimension; remove them and it becomes more tight in atmosphere and tone, contained and quiet. Along with these and the jagged strap of bright yellow with contrasting bold black 'BROOOO' letters (the noise of the engines and machinery) running across the top- the loud, almost invasive, constancy of it, they provide a sense of  life and liveliness to proceedings. Notice how instead of a full, unbroken circle, he uses dashes to circle around the lights to make them a wavering, flickering pool amidst the dark, instead of a sure, steady beam. That sort of tiny thing that you perhaps don't notice but works to build what you get from the whole picture: here a sense of smallness, that the conditions are delicate, aren't really safe, the light is sporadic. 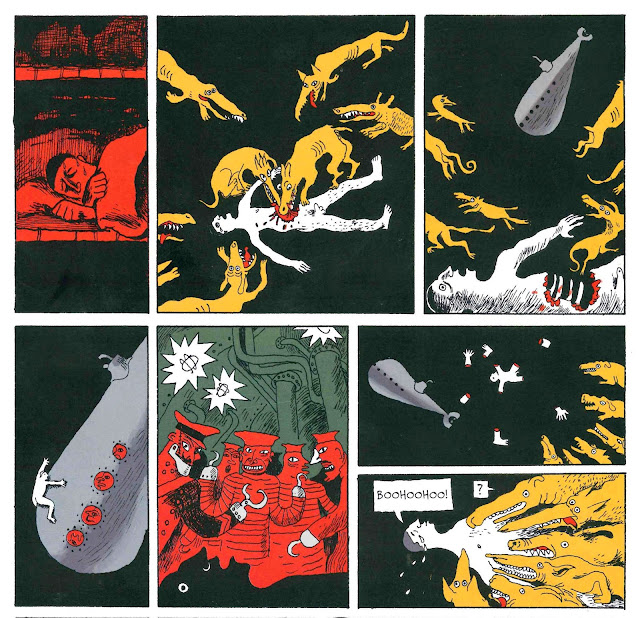 This passage is  amazingly evocative, its typography reminiscent of that of Greek vases. Blain renders George's acute sickness, fever and pain effectively in his dreams and delusions. Wet-snouted jackals gnaw at his stomach, tearing it out in chunks as he lies naked and prone, unable to do anything. He thinks he's been saved by the arrival of the ship which scatters the animals, only to be laughed at by the seasoned sailors who crowd around him similarly to the dogs, mocking his weakness and novice status. That inferiority/insecurity and vulnerability is reinforced by his nakedness and the phallic symbolism of the ship as it drops down- the sailors are all proper men, and he's not. They then literally leave him dismembered, as the jackals return once more. The inky blacks against the orange and red feed into this feverish tone perfectly, imbuing a primal heat, as the panels close in, getting smaller and tighter. In the very next panels (not shown here), he begins dreaming about a woman having sex with him as he continues to lay in the same prone position, no doubt in an attempt to restore his manhood. 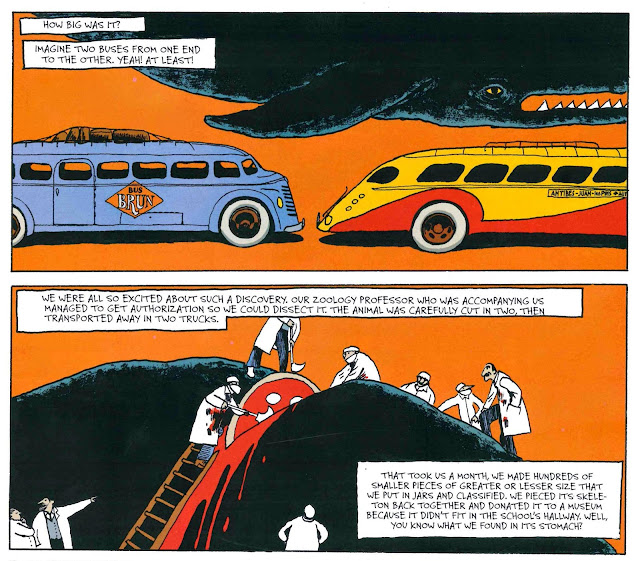 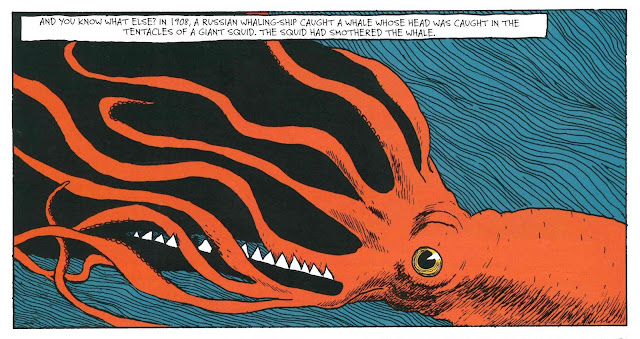 Amongst other qualities, what makes Blain a great cartoonist is his ability to switch up his art style according to what's happening whilst retaining an essence of what makes him him, so the effect isn't jarring. Here, in another surreal sequence, George narrates a story from his younger years in which his class had the opportunity to dissect a beached whale that had washed up on shore. The 2-panel sequence at the top is striking in that it combines outlandish humour with a stark viscerality: you have the whale and its enormity being measured against 2 jauntily coloured buses, and then a team of white-coated people sawing and cutting into the shiny black meat of the body, the flash of white bone and red cartilage, as bright red blood pours down. What really pushed it out of the standard is the cheeriness of the orange background, which by the second panel has begun to take on distrustful ominous undertone, like the fixed smile of a clown. The mixed messages and queer whimsy of the sequence play into the unreal situation- 'we dissected a whale!' On the very next page, with George now having segued into another tale he heard of a squid who smothered a whale, the two stuck together, is more epic/mythic in nature: the stylised blue whorls of the sea, the appropriate contrast of the orange and black more traditionally illustrated. 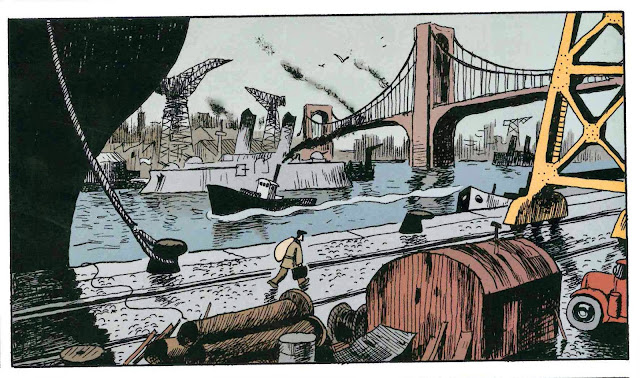 A final panel from the end, taken from the penultimate page is idyllic in its calm, showing a return to both land and sanity. Note the differences in colour palette when on the ship and when on shore: the latter given softer, lighter shades- no extremities. George situated centrally, and despite being relatively small in relation to all else around him, his gait, coat and hat, the bags he's carrying hint at an air of greater confidence. He's moving literally, and looking to move on. Looking at this panel, everything seems so far away already -for the reader too- like when returning from holiday as if you never left. The Speed Abater is an homage to a type of vessel and the life-style and customs surrounding it as much as it is anything else, no doubt informed by Blain's own time as naval officer, and this loving shot of the docks encompasses the character and specific beauty of the place. It's a nice juncture at which to part.
Posted by Zainab at 22:50