A simple idea behind the Take 3 Panels feature: introduce a book and its authors, with a brief overview/outline of plot, and then pick out 3 panels from it to deconstruct and chat about.

The comic: Joe the Barbarian by Sean Murphy, Grant Morrison, Dave Stewart, Todd Klein (2011)
The story: 'Joe is an imaginative young kid of 11 who happens to suffer from Type 1 diabetes. Without supervision and insulin, he can easily slip into a delirious, disassociative state that presages coma and death. One fateful day, his condition causes him to believe he has entered a vivid fantasy world in which he is the lost savior - a fantastic land based on the layout and contents of his home. His desperate attempts to make it out of his bedroom and down the mountainous stairs to find food, switch the lights on, and answer the phone to his mother, transform into an incredible, epic quest adventure through a bizarre landscape of submarine pirate dwarves, evil Hell Hounds, Lightning Lords, and besieged castles; a landscape which allows him to work out his own and his family's problems.' 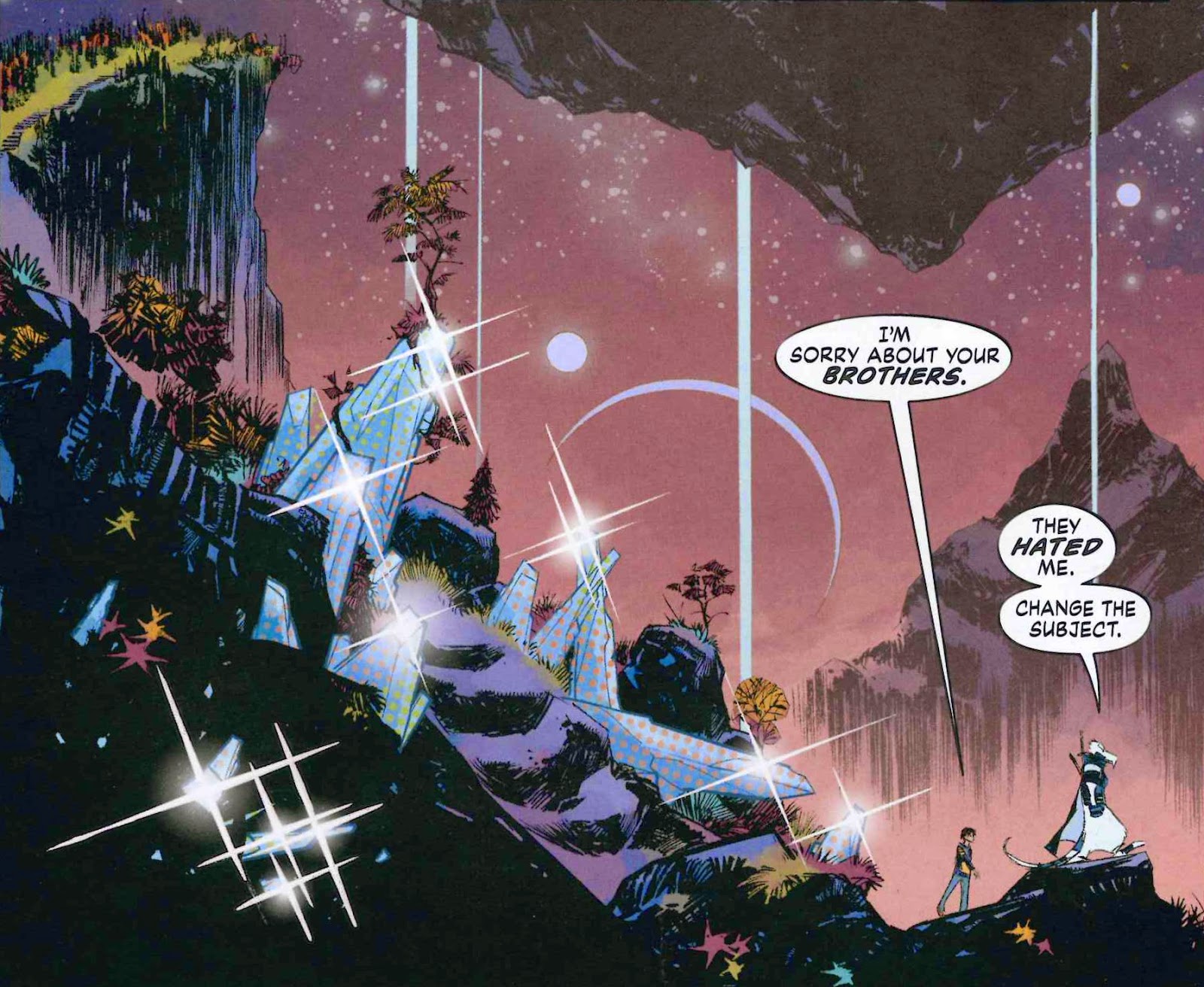 I am by no stretch of the definition, a Grant Morssion fan- this, and WE3 is pretty much the extent of my appreciation, but I love Joe the Barbarian a lot. It combines the importance of stories and make believe in our lives via Morrison's intertextual tendencies and referential cultural detail piling (usually applied to multiple world narratives in superhero comics) to effective strength: a tale of being fortified and nourished and saved by the literature and texts you consume, receiving from the things you love. And it has Sean Murphy illustrating it, with Dave Stewart on colours. It was difficult to pick panels out from this because the layouts are cleverly designed to mimic the overlapping worlds and Joe's fragmented state of mind with lots of insets panels, changing sizes, and overlaying illustrations.

This first selection is an early panel in which Joe first enters the Iron Kingdom and just look at all those sparkles and beams and moons and stars and crystals, strange plants, beautifully picked out by Stewart's colours: the pinks, purples and blues are wonderfully employed throughout in various hues and combinations. There's so much of this in the book; as ever with Morrison it's unabashed about harking back to the iconography of old galactic space adventures and I love it- it's utterly gorgeous to look at and it heightens the sense of dreamscapes, otherworldliness and cosmicosity, as well as being slightly trippy, again reflecting Joe's hallucinogenic diabetes-induced stasis. This panel is very much establishing setting -a full  look at the grandeur of this landscape- with Jack and Joe in the corner, whilst also signifying the journey they're about to embark on. As you go through the book, there's a lot of Jack stood and positioned on raised platform and spotlit areas- for me, he's he real hero of this book. 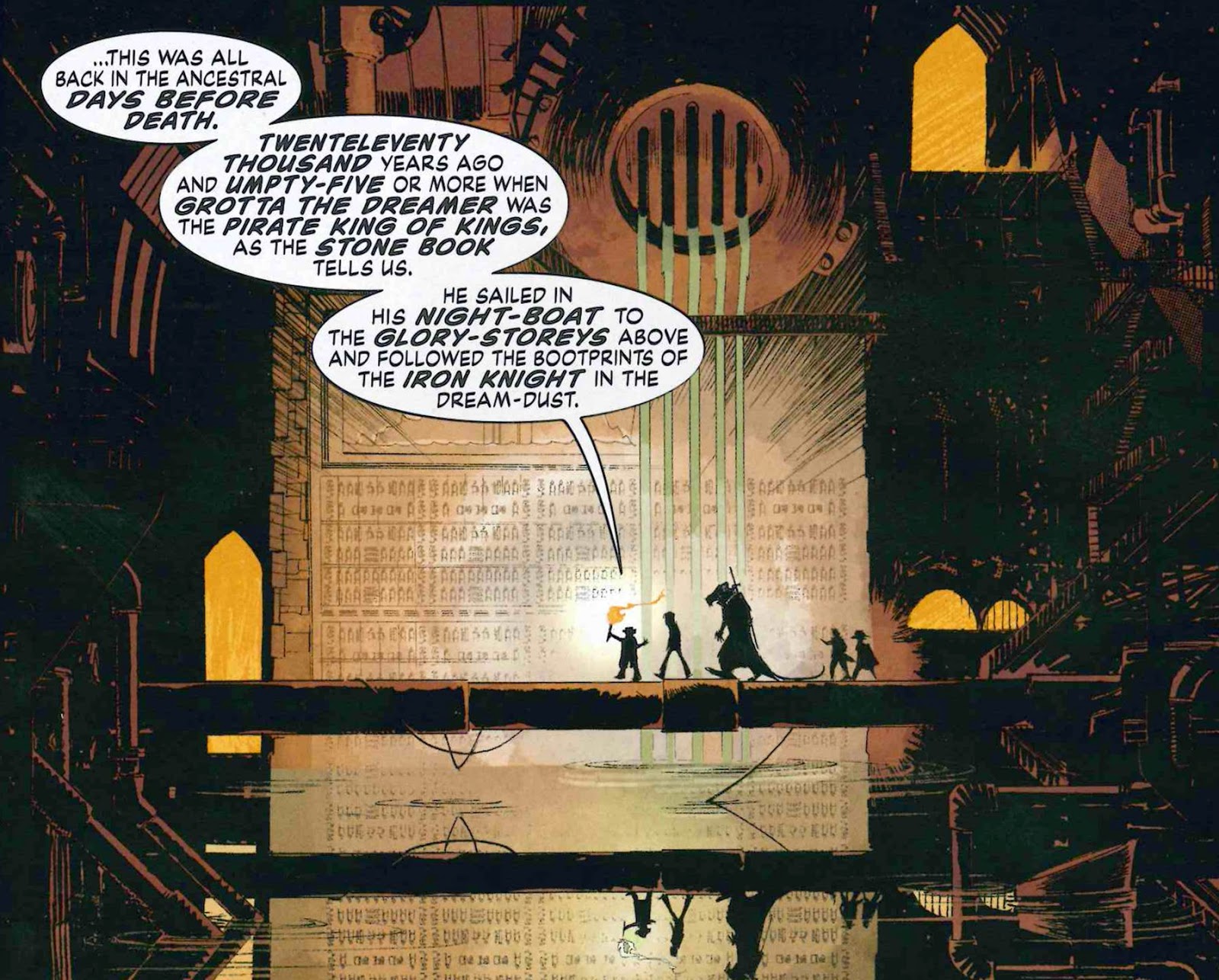 A lot of this book is spent with Joe and Jack walking around, and I like that (I'm sure there's a Japanese term for wandering/walking stories, but I'm blanking). Not only does it speak to the figurative and literal journey of the characters, but the fact that their surroundings are constantly changing provides Murphy with the opportunity to draw a bunch of different things. Here they're in an underground city, and having Jack -who's obviously modelled on Splinter- in a sewer-type locale highlights the TMNT homage. One of the things I wonder about from time-to-time is how Eastman and Laird managed to make a gigantic rat such a noble and distinguished figure, and Jack's characterisation hits  a similar note. He's more rough warrior with his armoured robes, than ninja sensei, but still retains an aura of natural leadership and authority. I like the silhouette he gets here; he's the tallest and placed in the middle of the procession and his sword, tail, feet, and robes are all discernible, despite the relative small size of everyone in this panel- he's the only one you're able to identify due to those features.

There's a rustic, almost steampunk feel here, thanks to the browns and oranges, and lots to notice: the pipes, the huge dripping drain, the reflections. The calm stillness of the water below, together with the warmth of the oranges and fire, the rounded arch of the windows letting in light, let you know this is a quiet, safe moment. The composition, namely that huge, central drain, is such that the dripping is positioned directly above the characters' heads,  drawing the eye downwards to the figures: 5 lines of water equal to 5 'people.' And finally, there's that golden hieroglyphic wall in the background which adds to the history and complexity of this world, lending it further mythic undertones. 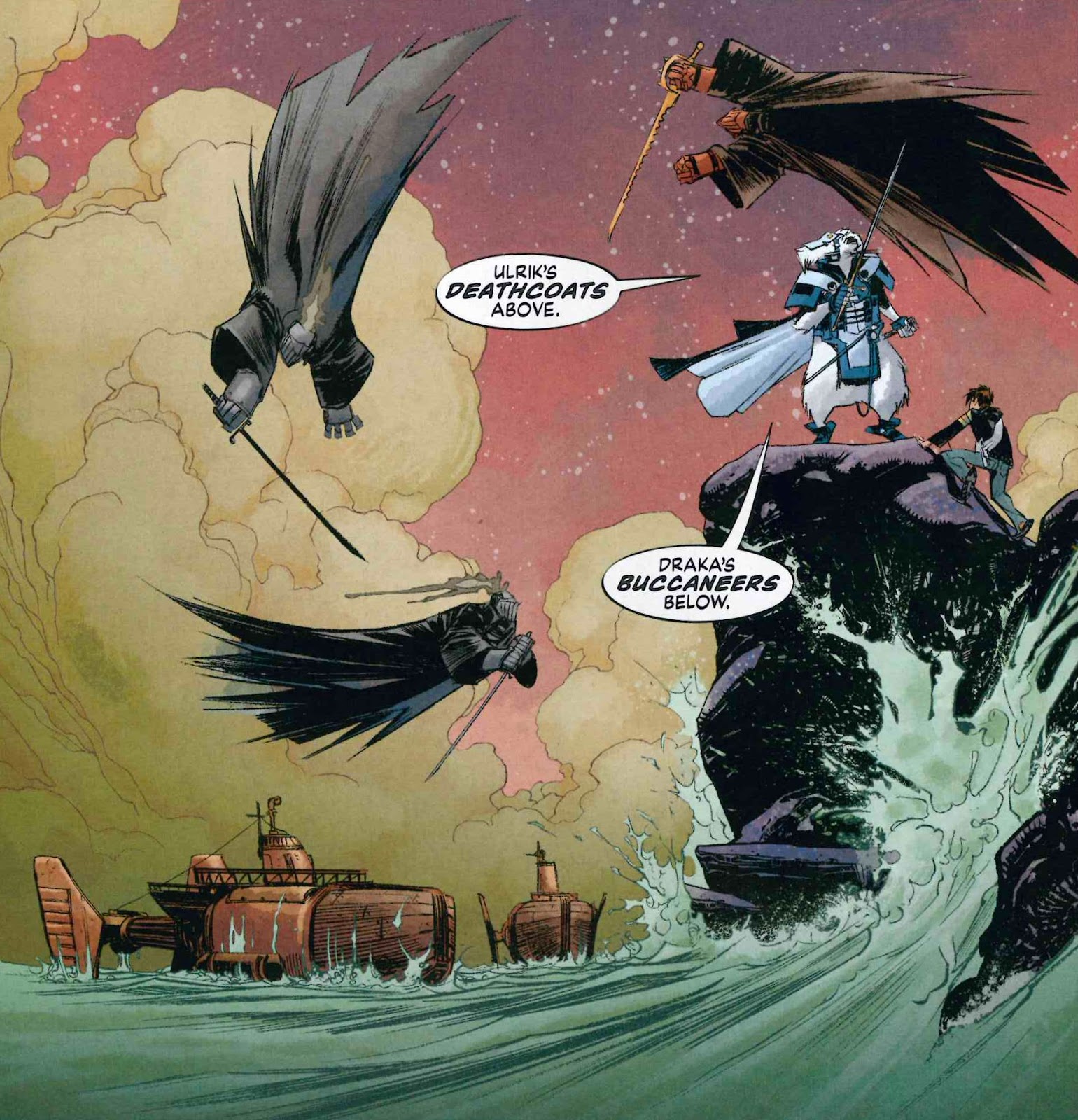 Bad things, good thing, powerful things, symbloismic things- they all come in threes. This panel is great because it shows Jack looking awesome in all his regalia, sword aloft and ready to fight. What's of interest is Ulrick and his Deathcoats, circling around them in the air, together closing the loop of the leap. Murphy draws capes good- sharp but with movement, not too stiff, although they could be more flowy. Jack and Joe may be placed off to the right of the panel here, but their importance is still signified by the dramatic effect of having them placed on the jutting rock rising out of the water, and it's large enough that the end of it almost reaches out into the center of the panel. There's a strong elemental nature to this- the sea, the flying, the clouds and then the power of three and clsoing of the circle. If you notice, the clouds are taking up the left of the panel and curling inwardly right, while the waves are and rocks on the right of the panel are reaching upwards and towards the left, providing balance to the composition. So there may not be a ton of detail here, but it's full and reinforces the notion of danger from all around, further anchored by Jack's words, 'Ulrik's Deathcoats above. Draka's bucaneers below.' In terms of colour connotation, the heavily implied, imminent danger appears to be from the Deathcoats (the clouds are cream, the sky pink, the water light green and not too choppy), and the one that Jack seems to be facing and focusing his attention to.
Posted by Zainab at 21:47