With pound in hand: December

Here you go: the final 'with a pound in hand' of 2014 cherry-picking the cream of this month's releases, in graphic novels and collected editions: 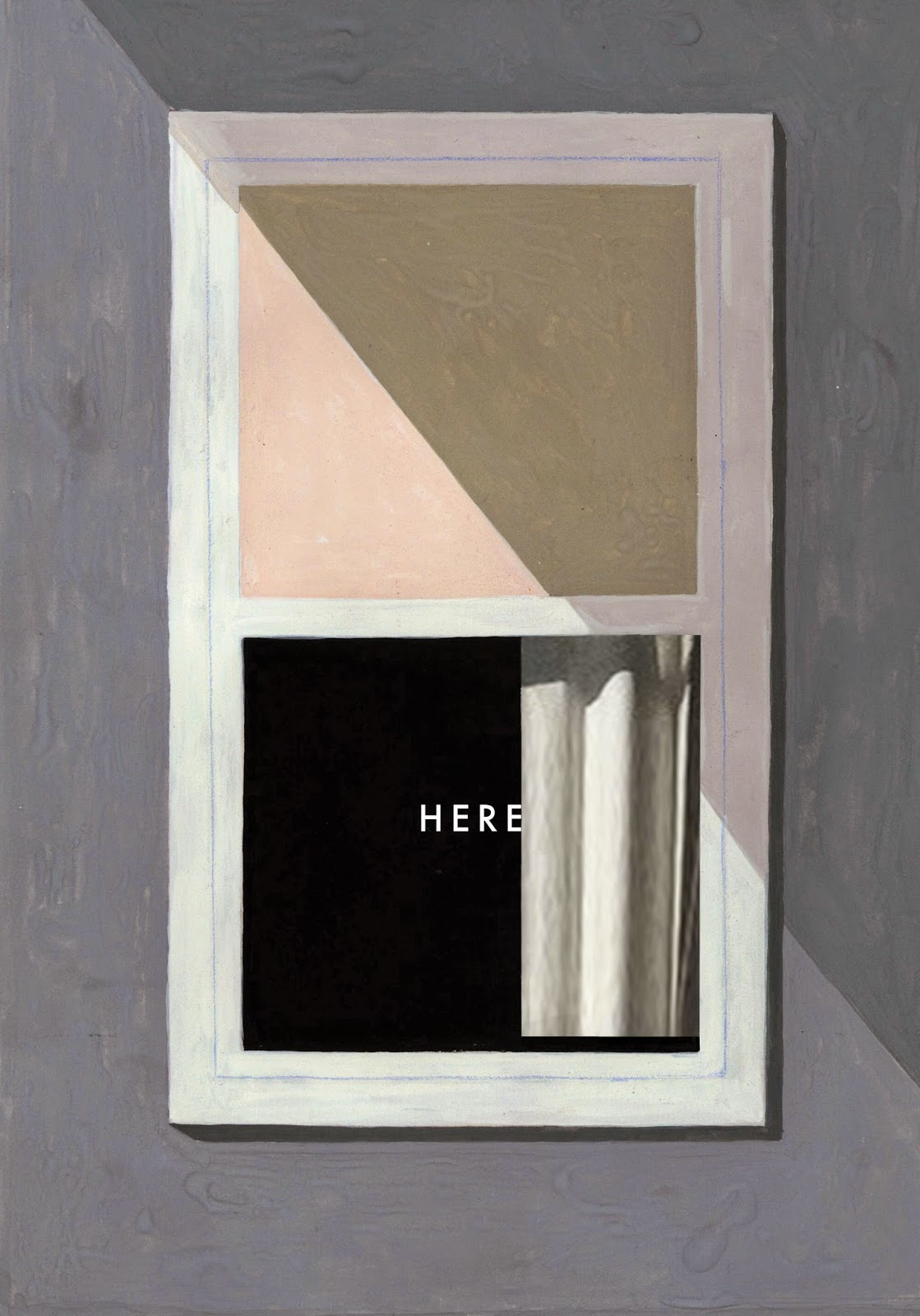 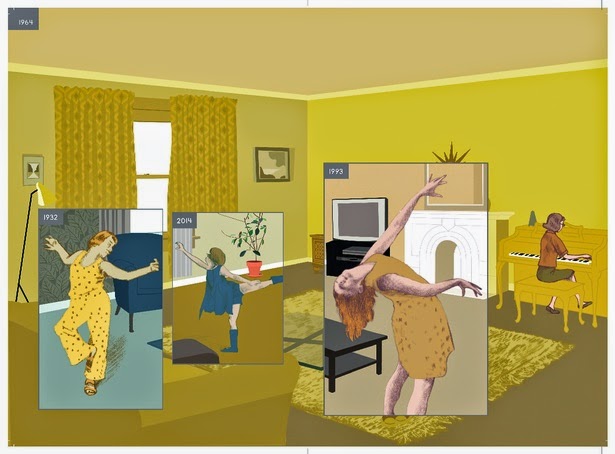 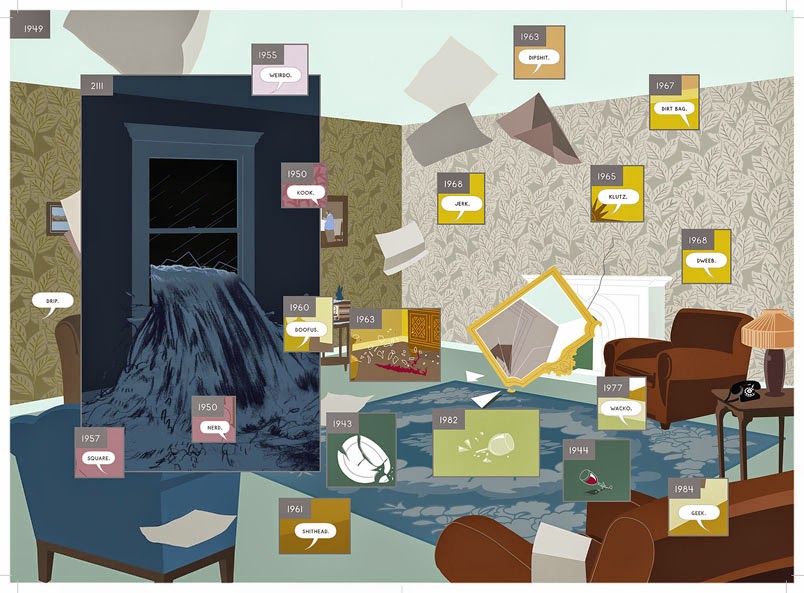 PICK OF THE MONTH: Here by Richard McGuire: Year-end, but the quality of comics releasing this month is stronger than ever. I'm plumping for Richard McGuire's Here as the pick of the month, for sheer interest and beauty. Here was originally a 35-panel comic, McGuire's first published strip which made its debut appearance in Raw. Fixedly set in the corner of a living room, a location it never left, it moved forwards and backwards in time with each panel -and further inset panels- depicting that exact same space and what was occurring in it from year to year- jumping forward decades and then backwards hundreds of years. This book sees McGuire expanding on that initial strip: a 300+ page, full colour book now covering the periods between 500,957,406,073 BC and 2033 AD, with the individual panels presented as double page spreads that allow you to take in all that is happening. Despite the concept perhaps now seeming less contextually fresh, Here remains an innovative and enthralling piece of work. 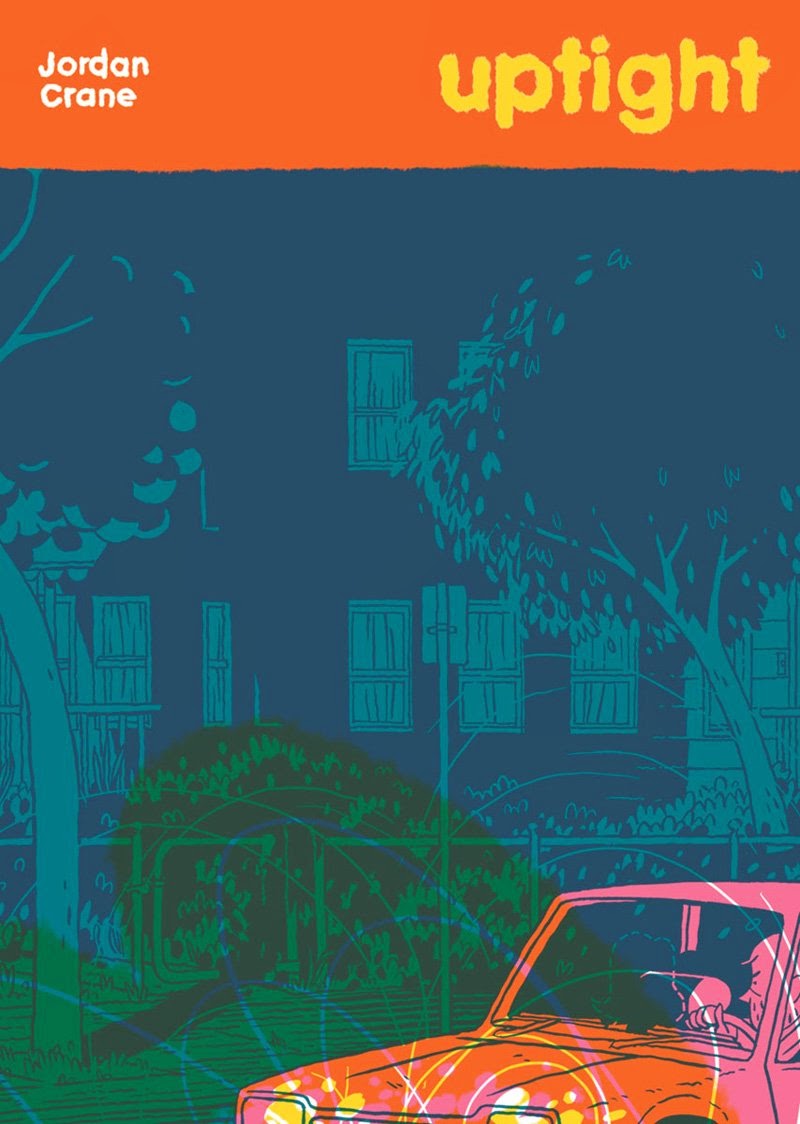 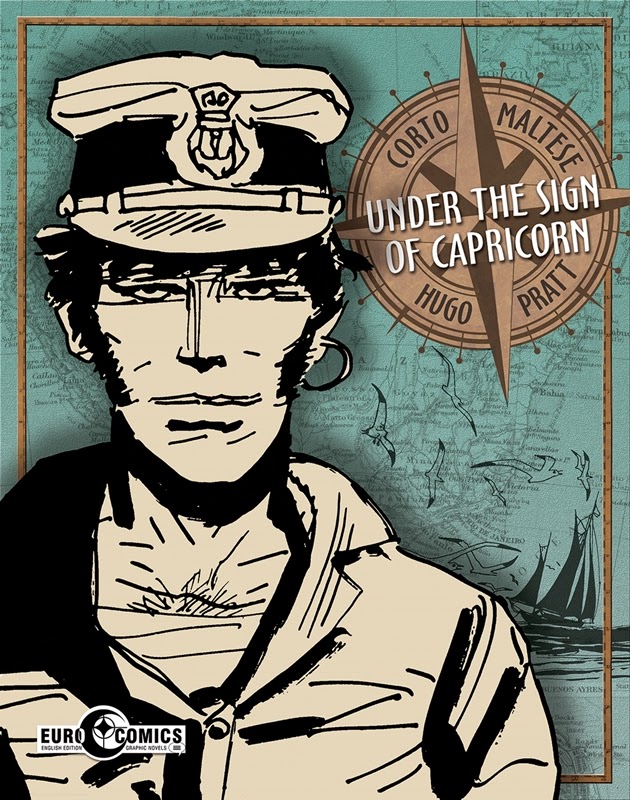 Corto Maltese: under the sign of Capricorn by Hugo Pratt, IDW: If there could be a tied pick of the month, what finally looks to be a proper quality translation of Corot Maltese would certainly qualify: 'This book, the first of twelve volumes, launches the definitive English-language edition of Hugo Pratt's masterpiece, presented in the original oversized B&W format and with new translations made from Pratt's original Italian scripts. Set during the first thirty years of the 20th Century, Under the Sign of Capricorn collects the first six inter-connected short stories Pratt created in France in the early 1970s: The Secret of Tristan Bantam, Rendez-vous in Bahia, Sureshot Samba, The Brazilian Eagle, So Much for Gentlemen of Fortune, and The Seagull's Fault.'

Uptight by Jordan Crane, Fantagraphics: Uptight collects two of the superb Jordan Crane's stories: Keeping Two, in which William's girlfriend goes missing during a trip to the supermarket, and he must begin to contemplate life without her; his anxiety rendered in stark, contrasting lines. The second story is Discovering The Dark, set in the year 2033, following a spacecraft repairman as he makes a shocking astrophysical discovery. This revelation leads him to undertake a clandestine seven month voyage. 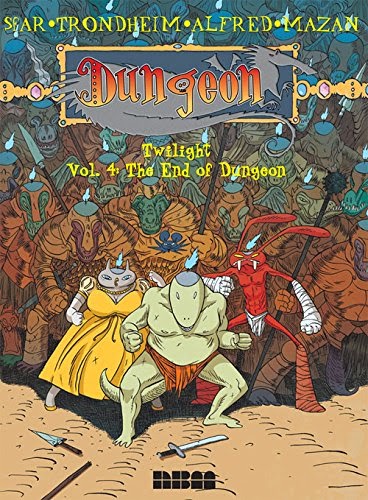 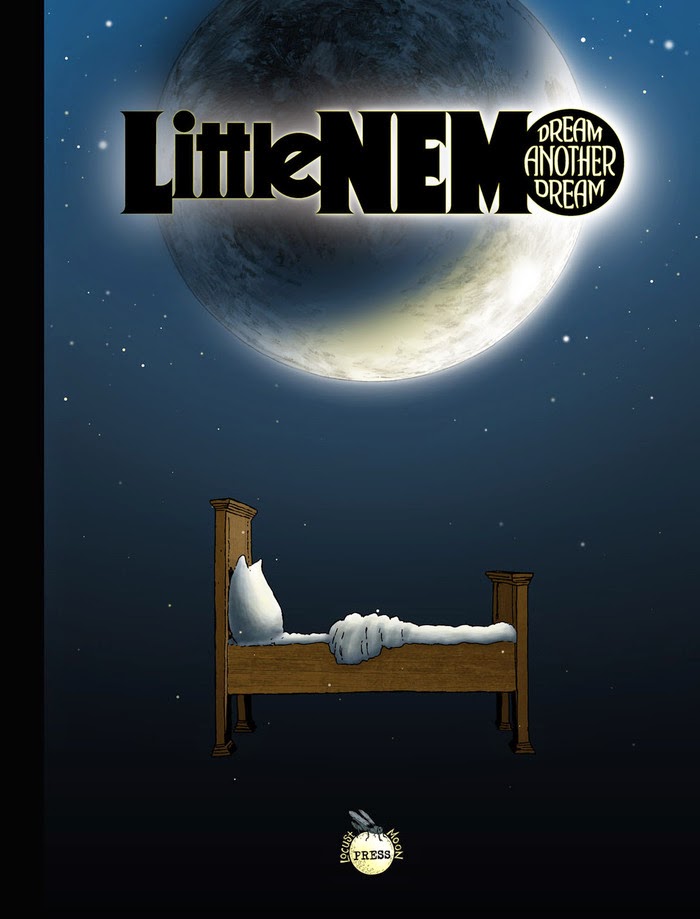 Little Nemo: Dream Another Dream by various, Locust Moon: I knew this was going to be huge (in size at the least) but when I got it in the post it was just ridiculously HUGE. I can't begin to imagine the logistics involved in pulling together such a roster of comic creators and successfully negotiating a project of this size, and Locust Moon deserve enormous credit for the achievement.  A tribute book dedicated to the creator of the Nemo newspaper strips, Windsor McCay, Dream Another Dream is a hardback book that replicates the original, full size format of the Little Nemo broadsheet pages at 16″ x 21″, with artists such as  Mike Allred, Paul Pope, Bill Sienkiewicz, Fábio Moon & Gabriel Bá, Neal Adams, J.H. Williams III, John Cassaday, J.G. Jones, Craig Thompson, David Mack, P. Craig Russell, Yuko Shimizu, Paolo Rivera, Scott Morse, Denis Kitchen, Carla Speed McNei, Peter Bagge, Farel Dalrymple, and many more providing their own interpretations of the strip.

Dungeon Twilight volume 4: The end of Dungeon by Lewis Trondheim, Joan Sfar, et al, NBM: The Lewis Trondehim-helmed epic fantasy series- one of the best and under-appreciated in contemporary comics, comes to a close, with NBM acting as the saviour of English language fans, by translating the books. 'The End of Dungeon sees the islets of Terra Amata move ever upward, thinning the atmosphere even further. While Marvin The Red and Zakatu, daughter of the Grand Khan, attempt to protect the Seven Objects of Destiny, Herbert and The Dust King are forced to swear allegiance to the Black Entity in order to gain access to breathable air. The end of Dungeon is coming! But there may be still time for one more revolution..' 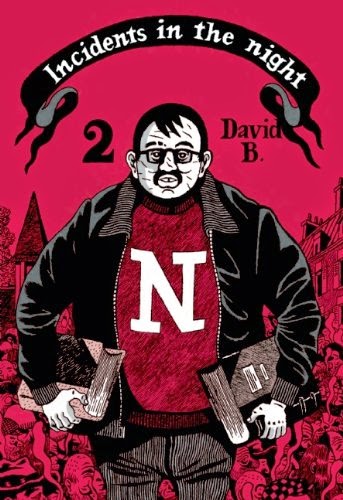 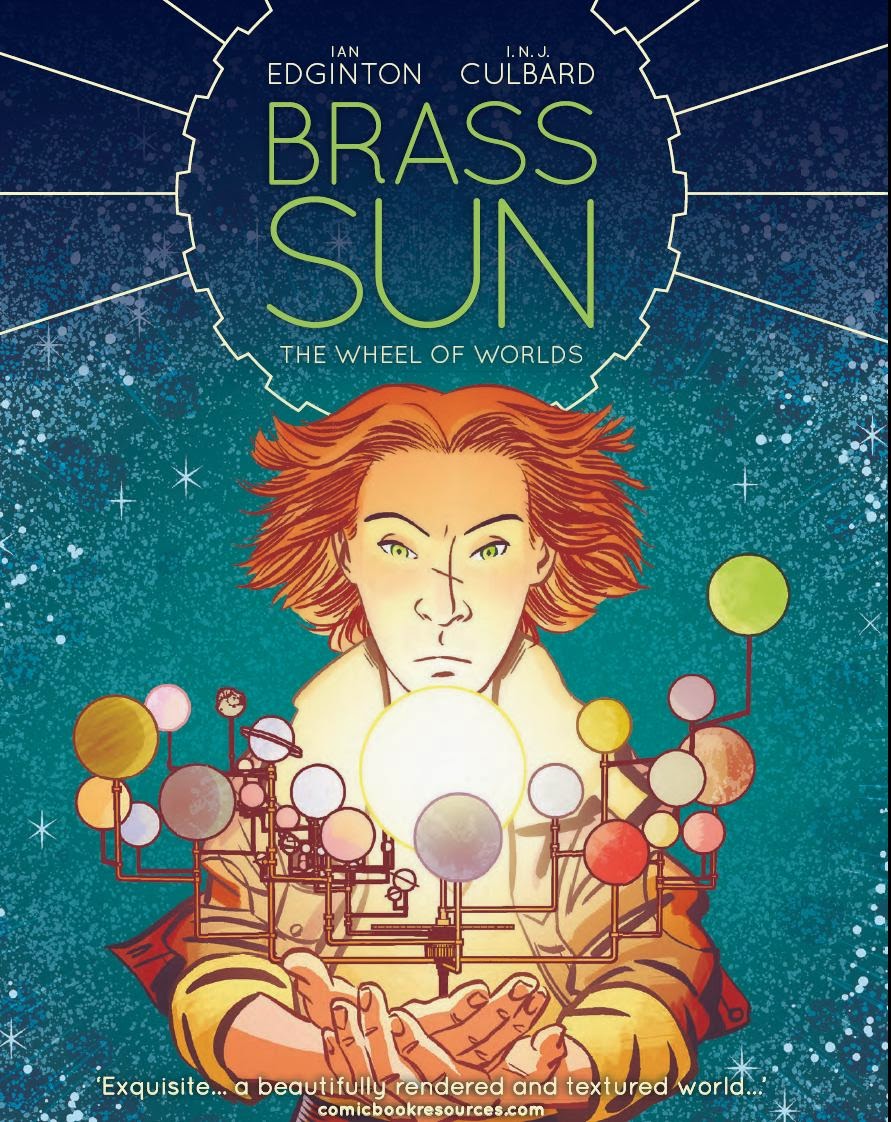 Brass Sun by Ian Culbard and Ian Edginton, Rebellion: I've avoided reading this in serialised format, so that I could appreciate it collected and I hope it lives up to the hugely positive reception I've been reading bits of. I'm a long-time fan of Edginton's writing, and Culbard's been doing some of his finest work (in my opinion) on Wild's End, so genuinely exited to finally see what all the fuss is about: 'The Orrery is a fully functional, life-size clockwork solar system, a clutch of planets orbiting a vast Brass Sun via immense metal spars. But the once-unified collection of worlds has regressed into eccentric fiefdoms, and ice is encroaching on the outer planets as the sun is dying. Wren and Eptimus must find the key to restart the sun, but first must escape the world known as The Keep...'

Incidents in the Night 2 by David B, Uncivilized Books: The second volume in David B's meta fictional literary caper sees the worlds of Epileptic and Incidents in the Night become entangled as the author's dead brother, Jean-Christophe, joins the cast to solve the mystery and uncover the occult machinations of the mad editor, Emile Travers. Expect more rich bafflement.
Posted by Zainab at 00:30