I've been thinking a lot over what form the blog will take this year. I started writing about comics intermittently on here in 2011 at a point when my interest in the medium was really beginning to deepen, and the excitement and thoughts my reading was generating needed an outlet. It wasn't until 2013 that I began to think of writing about comics as a function in itself- at which point I began writing for Forbidden Planet, and thinking about prospects and paid work. Last year my main aim was simply to be more disciplined -or productive, copious- in terms of output. Just writing. The other goal was to start picking up paid gigs. Both of those boxes were ticked solidly enough, and I moved on to wondering what to do with this space late in 2014, or whenever I got frustrated and petulant and wanted to smash the screen. So I've been pondering new goals, new ideas of what Comics & Cola can be.

I like writing about comics. A lot. So I'm going to continue doing that here. However, I simply can't pour as much time and energy into it as I did last year (where my life ended up revolving around it, and I spent way too much time online, which fed into being sucked into a particular temperament which I'd rather stay away from), so that means a reduced capacity to some extent. I want to write more in-depth pieces, do a bit more research, running alongside bits of news and reviews, and the theory is this will free up more time to do that. I want to get organised and set specific time aside to write, too. Leaving things open- writing whenever, wherever, meant I was too laid back, rushing around to get things done, a lack of focus, and that all time was effectively writing time eating into pretty much everything else. Setting specific hours will hopefully help compartmentalise and tighten the writing. In addition to that, and apropos to the honing in and organisation, I want to cut down my spending and set apart a fixed monthly budget for spending on books: £55. I have piles of books I haven't read lying around and I don't want that. This should force me to decide which comics I'm really keen to investigate further and clear up the backlog of what I want to write about (yeah, right, but still- theory).

I'm setting Saturdays as computer/device free days. I look at a computer all day at work, and then some more at home, and I suffer from migraines. I want to spend less time online, less time on screen. Be more disciplined.

So. The blog will update on Mondays and Thursdays instead of Mondays, Wednesdays and Fridays. 'With pound in hand,' 'Comics shelfie' and 'News, Views, and Oddities' will run as monthly features. I want to run at least one interview a month, too. Essentially, it'll be just slightly less than the number of posts per week in relation to last year. I want this to be substantial as a reading experience, which means it's still going to remain time consuming in terms of production. I'm not sure how long I'll be able to continue in this vein; part of me knows the answer is most likely to prioritise the paid work and opportunities offered me, and write for those avenues fore-mostly, shuttling anything additional here, but I like having my own space. We'll see how it goes. I may look into going freelance full-time later in the year, but that's for then.

In the meantime, I'm also fiddling with the comics remit a little and will be writing about zines and illustration more, toys, design, posters, maybe film. Let me be clear- you're never going to read news about Marvel movies here, but there is a piece being published today about an Indian comics artist creating a film poster. And an upcoming photo-post on my new Yotsuba figure. That kind of thing. I love comics but it can get a bit stifling and boring as a writer to bang things out even when you're not particularly feeling it- this should provide me with more avenues to explore. I hope it will still be of interest.

The most exciting thing I have to share is that Comics & Cola will be publishing Darryl Seitchik's new Missy comics here, twice a month, every Friday. I've been wanting to get some original comics on here for a while; to support good comics, and have been turning over thoughts of working with a cartoonist to perhaps serialise a new strip. I've been such a fan of what Daryl has done with Missy, and approached her about producing something, so when she told me she was looking for a place and way to continue creating Missy comics, it was essentially the definition of a no-brainer. Here's Daryl to tell you a little bit more:

'For those of you who are new to the strip, I started Missy a year and a half ago, but I’ve been writing in Missy, my diary, since 1998.  If I had known then that one day the entries would turn into a comic that people would read, I probably would have included more vocabulary words and less of the “real trooth.” Thankfully, I never expected this, but I always sensed that my letters to Missy were also to my future self.' 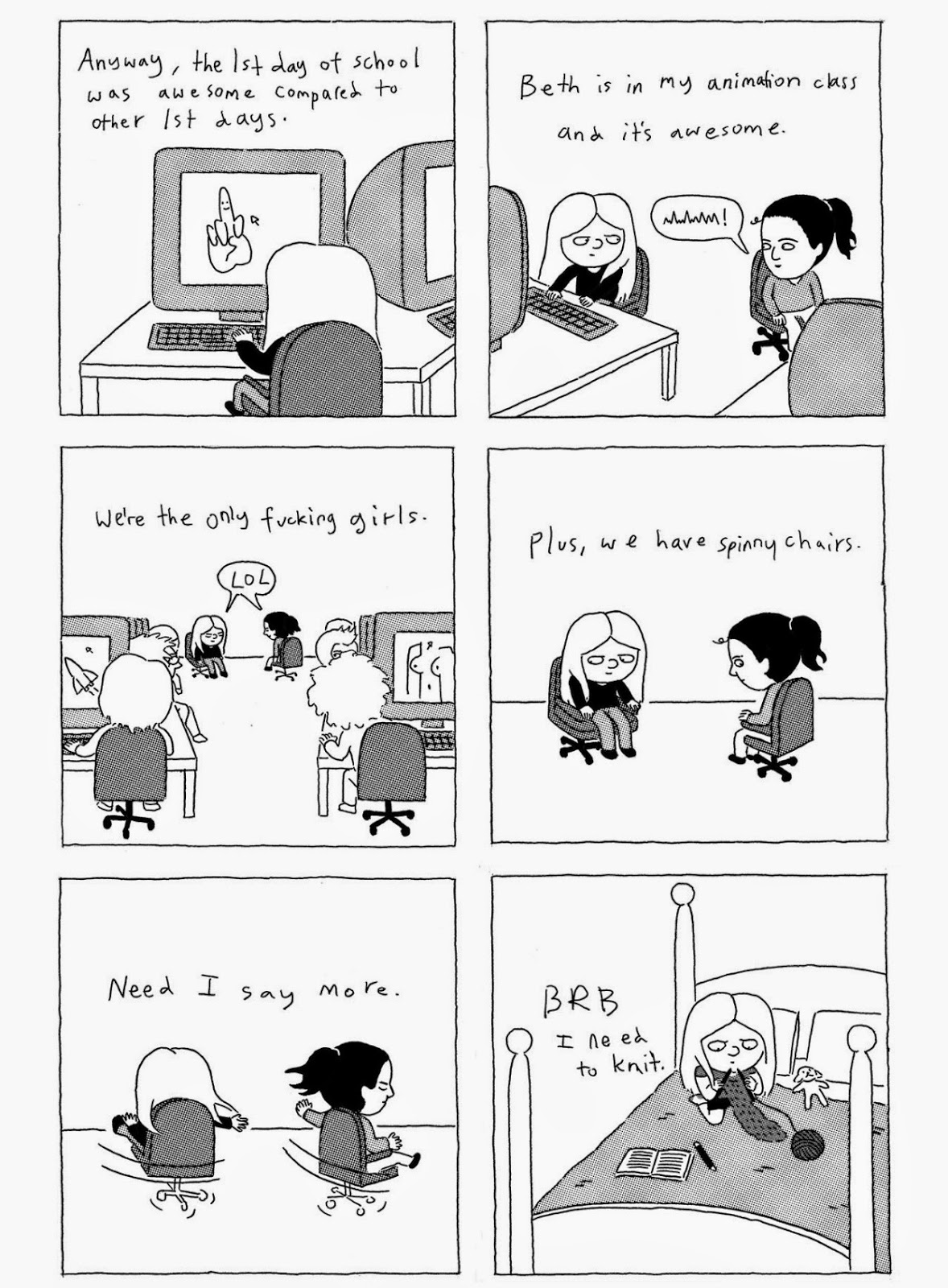 You can read previous Missy comics at Daryl's Tumblr. I'm honestly so pleased and proud to be able to give Missy a home here.
Posted by Zainab at 00:02