Corto Maltese: a hero with empathy -and legs 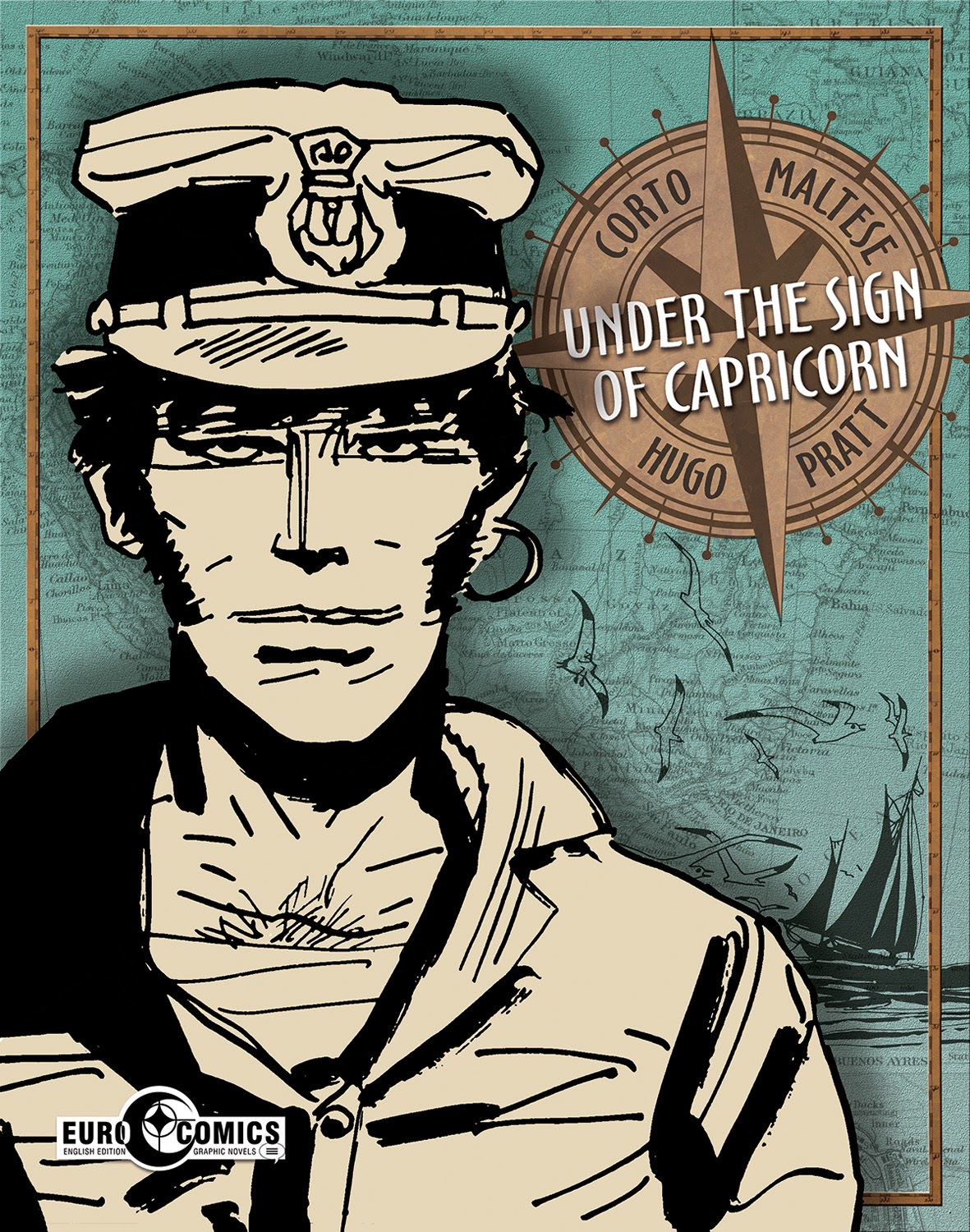 Corto Maltese: Under the Sign of Capricorn by Hugo Pratt, translated by Dean Mullaney and Simone Castaldi, published by IDW

There are few matchable pleasures in literature as coming to the oeuvre of an author who's considered great, reading their work for the first time, and recognising it as such. It helps, I think,  if you know less; the more disinclined you are to make presumptions, to hold associations, to approach with an open-mind. Such was the case for me with Hugo Pratt's Corto Maltese. Pratt is widely considered one of the masters of the medium, thanks largely to his most famous creation of a louche, intelligent, morally complex sailor, but those books have never received a comprehensive English language translation- until now. And what an experience it is. I've honestly not enjoyed a book as much as I have delighted and revelled in the sheer goodness and ability of Corto Maltese. After reading the first few pages with a degree of curiosity, I sat back and allowed myself to simply enjoy and savour the tale being woven in all its excellence.

To quantify it by genre, Corto Maltese is the highest quality of adventure stories -of the oceanic pirate strain- you will read; a possibly mutinous (Corto's past is left muddied at this point) ex-sailor turned man of fortune, embroiling himself on whim and deliberation; superbly written, beautifully drawn, with engaging, complex characters who you want to spend time with and see more of. Under the Sign of Capricorn sees Corto take up the cause of a young British orphan, Tristan Bantam,who comes to him for help after his father's death, with a clutch of mysterious maps and documents, regarding his inheritance and to search for his half-sister, Morgana, whom he has never met but is located somewhere in south America.

If books are going to be titled eponymously, there's an expectation that that character live up to the billing: they should be of significance, of interest, have weight, and strength and appeal ( it's worth noting that it's not important that any of those aspects be portrayed positively). For the very first panel of the comic you get this establishing image:

His name are the very first words of the text and Pratt goes on to declare him a 'man of destiny,' but more than any other quality, here he imbues cool. The closest iconography I'm reminded of is the coiled looseness of heroes in westerns- the hint of swagger but an assumed relaxed pose: quietness, cockiness, and surety all hinted at simultaneously. Take a look at the composition and body language here: head and torso positioned centrally in the panel, feet up, cigarette in hand, cap and hair shielding his eyes. He's watchful perhaps lost in thought. The immediate next panel is a close-up side profile, and the narration is semi-admiring, semi-mocking him as he lights up 'as if he were performing for an invisible audience.'  In fact for the whole first page he doesn't say anything -until he's interrupted by a drunken brawl-, an interaction that involves the reader just looking at Corto, feeling the atmosphere, the presence of the man,  serving to set him up as this strong and silent type, in the know, someone cool, someone to be admired, someone to beware of.

Pratt renders that physical presence of Corto in really fun, characterful ways: he's tall -very tall- and louche, whenever he's standing he's loosely casual but ready, not slouched, but not fully straight either: there's a sense of him being able to manipulate his presence to fit the situation. It's when he's fighting you realise he's a little too tall for really fast, easy movement and his style of hand to hand combat looks awkward and funny (and all the more real for it) but it does the job. Part of this has to do with the manner in which Pratt's able to convey movement: his is a less dynamic, more break-down style, more feel for action than pace.

Legs, legs, legs: this looks at once ungainly and slow and like it absolutely shouldn't be effective: 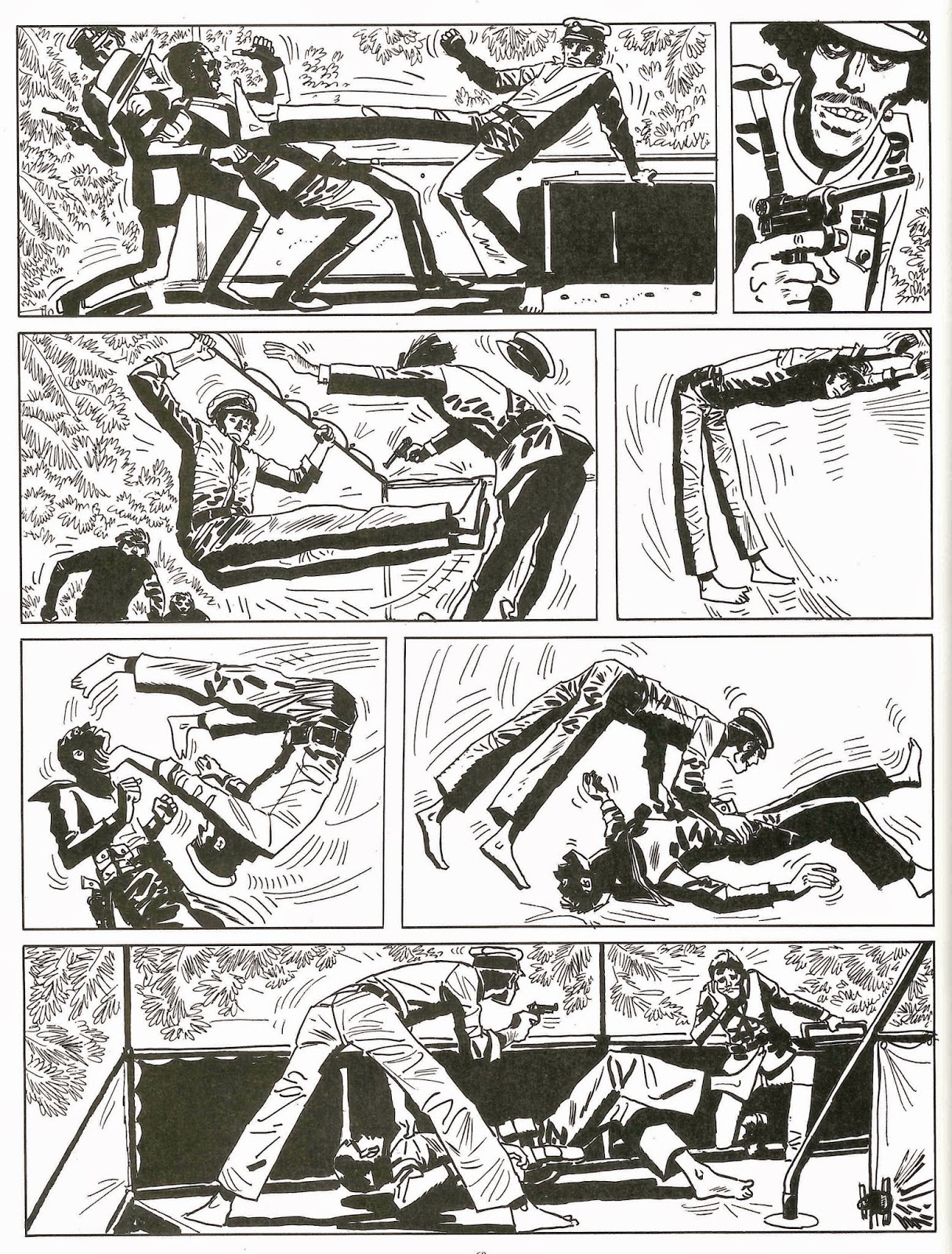 One may justifiably wonder how many tough guys with questionable deeds but strong moral cores we need. But there's more to Corto than a rakish air and an earring. In contrast to the current rash of contemporary omnipotent, unfeeling, sociopathic geniuses, one of his defining characteristics is his empathy. He listens to people and does what he can to facilitate their needs and emotions -interestingly not much of these stories are even really about Corto, until the final third-, whilst often working angles in his own interest. He's romantic to an extent- believing in  good and bad and right and wrong, although he's more than aware of how grey all these areas are (because he's like that too, you see); but still has faith in people despite being all too conscious of how utterly shit, corrupt and greedy they can be. He has a set of values that include looking out for himself as a priority, coupled with a subset of morality that requires him not to always act in self-interest: 'I am not serious enough to give advice and too serious to accept it.' His heroism begins with himself but doesn't end at other people.

Corto is cool because of the way he talks and dresses and stands and sits, but he is cool mainly because he cares, and also because he does: he acts on what he perceives needs changing or doing, it's not just lip-service. Corto takes on waifs and strays and those he feels subjected to injustice and tries to help them. For example, that drunken brawl mentioned earlier sees him ostensibly adopting the disgraced, alcoholic professor involved, giving him a place to sleep, befriending him and taking him along on his travels. Their dry, witty, odd couple partnership is another highlight of the book. 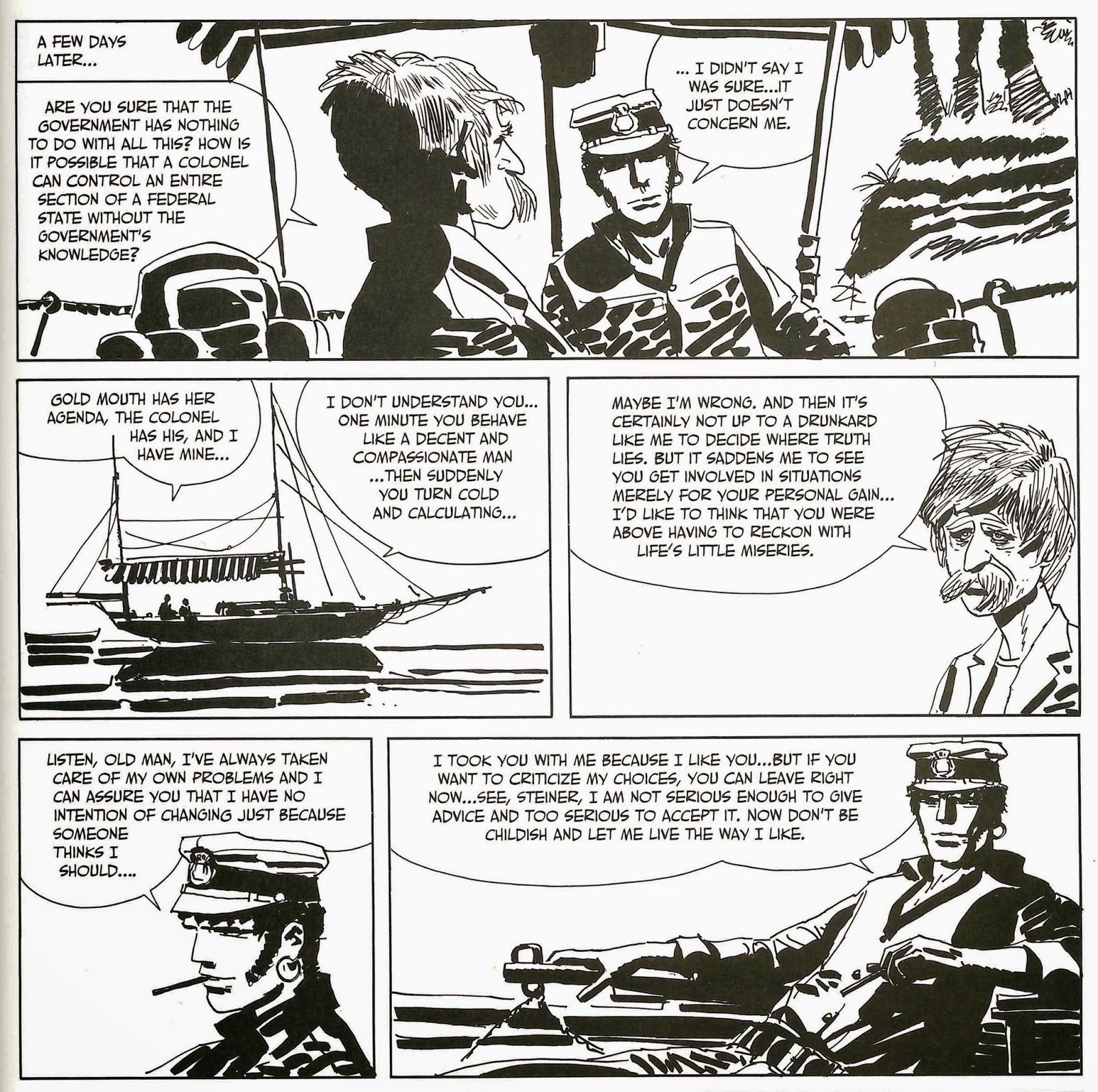 That empathy is central to Corto but is derived from Pratt who writes about people with the same respect and open-mindedness of his hero: incorporating people's cultures, traditions, and ways of living without exoticising or demeaning them, without pointing out how weird/quaint/curious/different/primitive they are. Corto's viewpoint is one of equality and respect, not condescending, but simply borne from experience, from knowing people, from travel. Tristian is amazed at an Indian speaking English- 'extraordinary!' but Corto is not: 'He's a clever guy who probably studied in some missionary school.' A normal thing. Pratt presents each culture and people as different and distinct but there is no explanation, no discussion: they just are, they exist and are valid; their legitimacy and existence never questioned.

This leads into Pratt writing some great, memorable characters: the gentle, steely, intelligent Morgana, Gold Mouth the wise and bodacious, and my personal favourite: SureShot. Morgana and Gold Mouth are instrumental in the orchestration of the narrative that's running parallel to Corto's and Tristian's, that of the revolution. For all the lovely flirtation that goes down here, both ladies have the measure of Corto and what he's able to offer, and utilise it perfectly. For his part, he respects them both, taking on board and deferring to their knowledge of the situation. As much as he thinks he has a handle on events, when he finds out he's actually the one being manipulated somewhat for the use of their cause, he can only admire their smart maneuvering, giving a rueful smile and tip of the hat, and acknowledging he would have done the exact same thing himself. SureShot's unforgettable short story has to be read to be felt: tragic and triumphant, a man so aware of his limits, of the world's caprice, and yet prepared to sacrifice all for the freedom of his people. 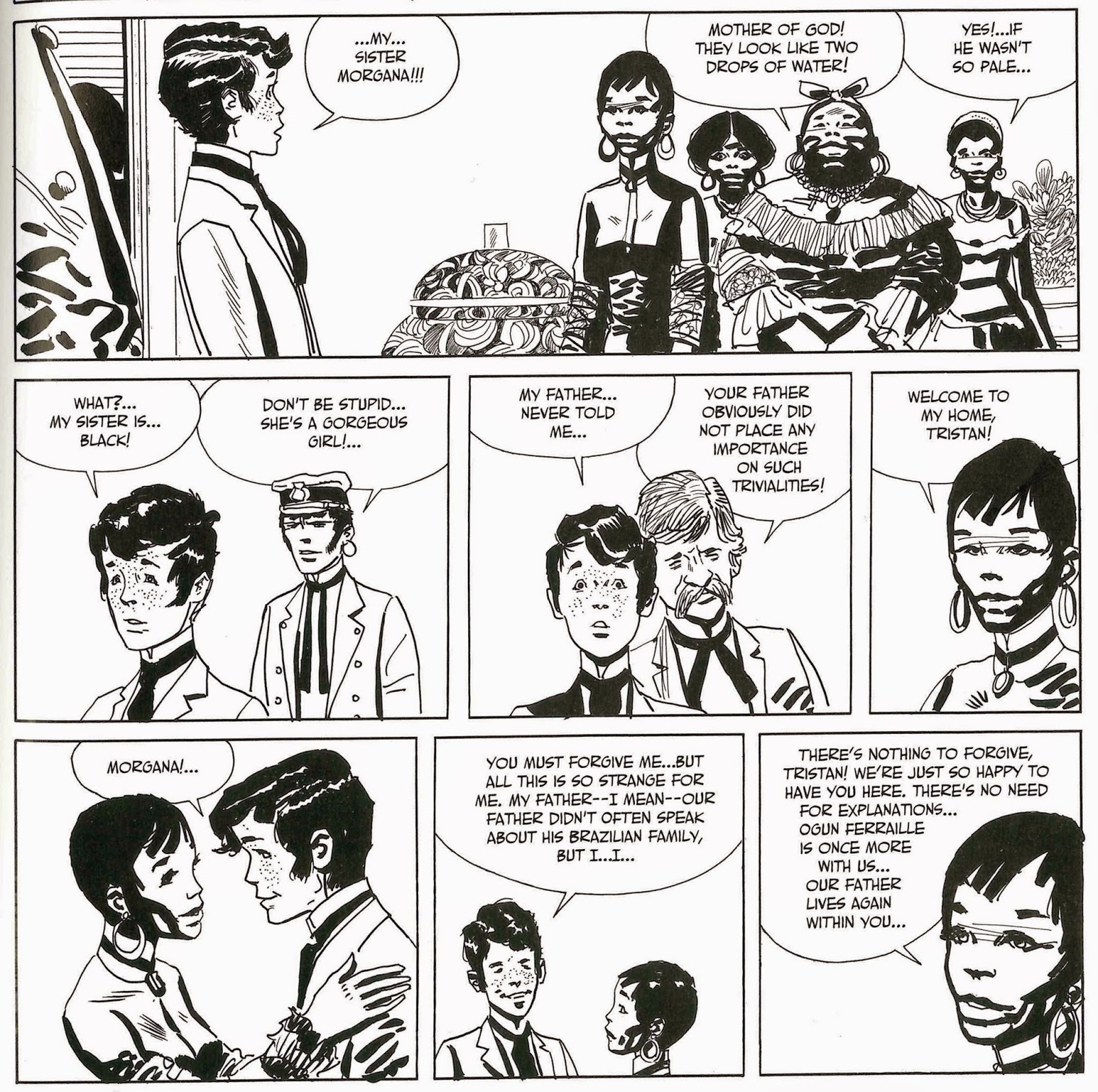 Pratt's art is beautiful; combining traditional, conventional beauty and drawing with capability and technique. Often with technique you get the sense of deliberation, a careful studying to produce a certain illustration and effect, but Pratt's work is effortless, it flows and glides; like its protagonist its inherently pleasing nature is complemented by learnt attributes. There's a seamless synchronicity between the writing, atmosphere, tone and art that allows for superior storytelling of the finest kind. Pratt's lines are largely fine: he draws the sea and horizons in swooping, sweeping arcs, creased detail; then alternating between thick brushes to convey base impressions of a thing.

The page below is a prime example in illustrating both those styles: in the second panel you have those very simple, thickly rendered smoke clouds, in the third lots of inks for shadow and depth, and that final middle panel of Corto running in panic: again very rough, one-touch strokes and squiggles. The effect it has here is to demonstrate the heat of the fire and moment and Corto's emotions, while the policemen remain meticulously turned out and ambivalent. There is a lot of this: stroke, stroke, stroke, stroke, and suddenly you have a boat full of people sailing lazily on. You can see the individual components in addition to the collective image it conjures. It's all gorgeously done. 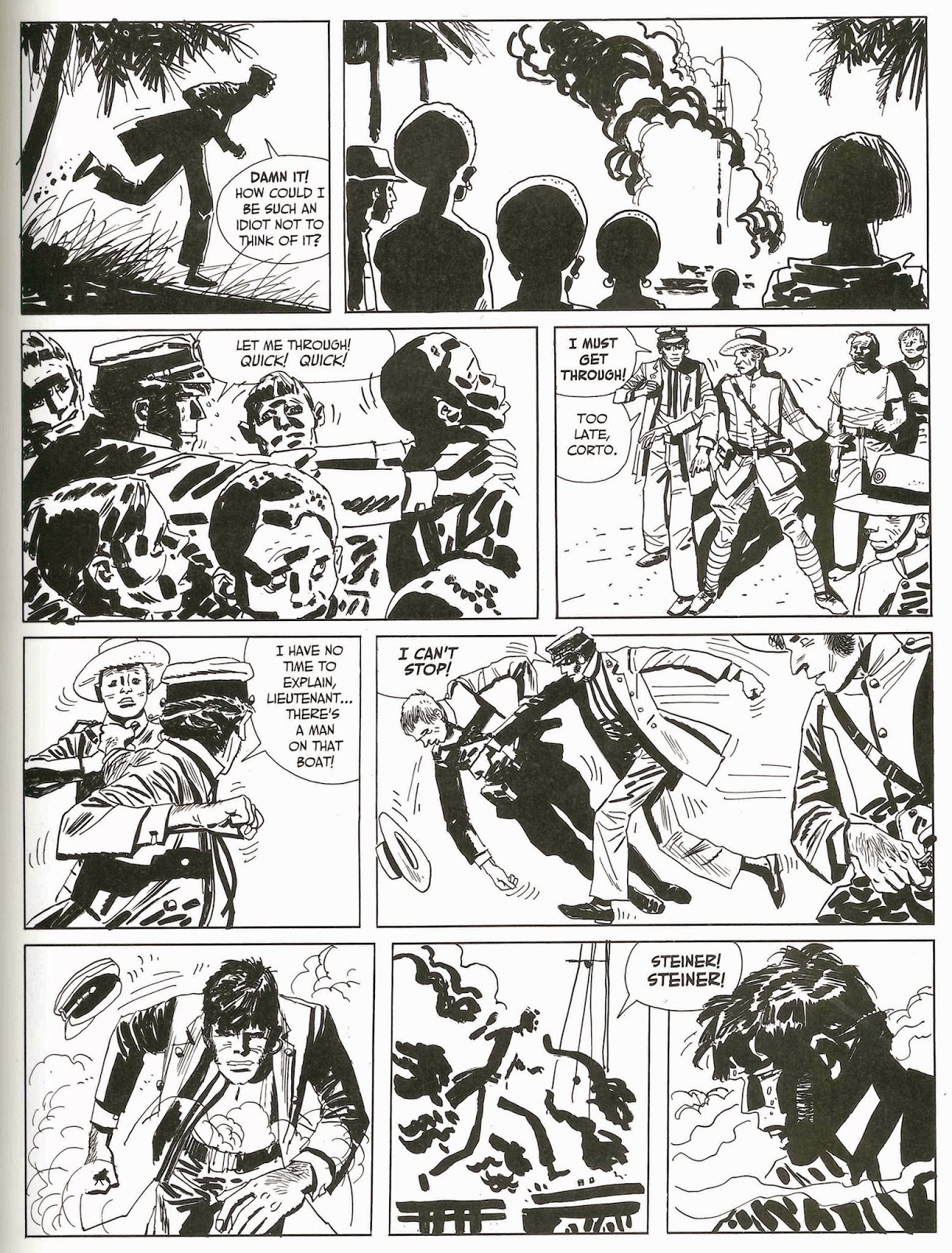 That unfortunate cover aside, IDW have done a  good job with the presentation- I know previous translations have had trouble with cutting out panels and sections and the placement of them, but this reads absolutely fine, the covers are nice and stiff and french-flapped, the pages are big and wide, and like Corto's legs, I just wanted it to go on and on.
Posted by Zainab at 22:17