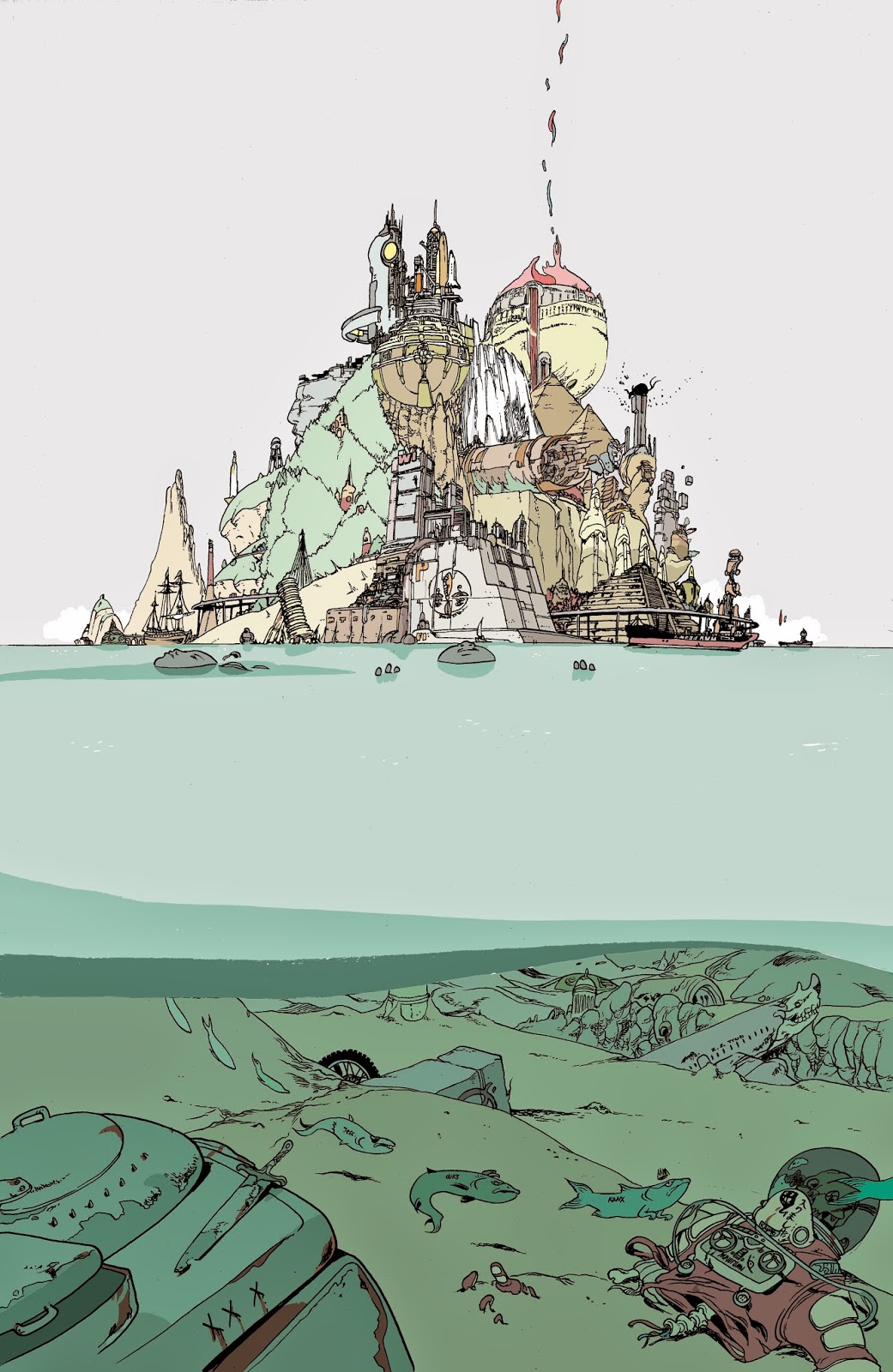 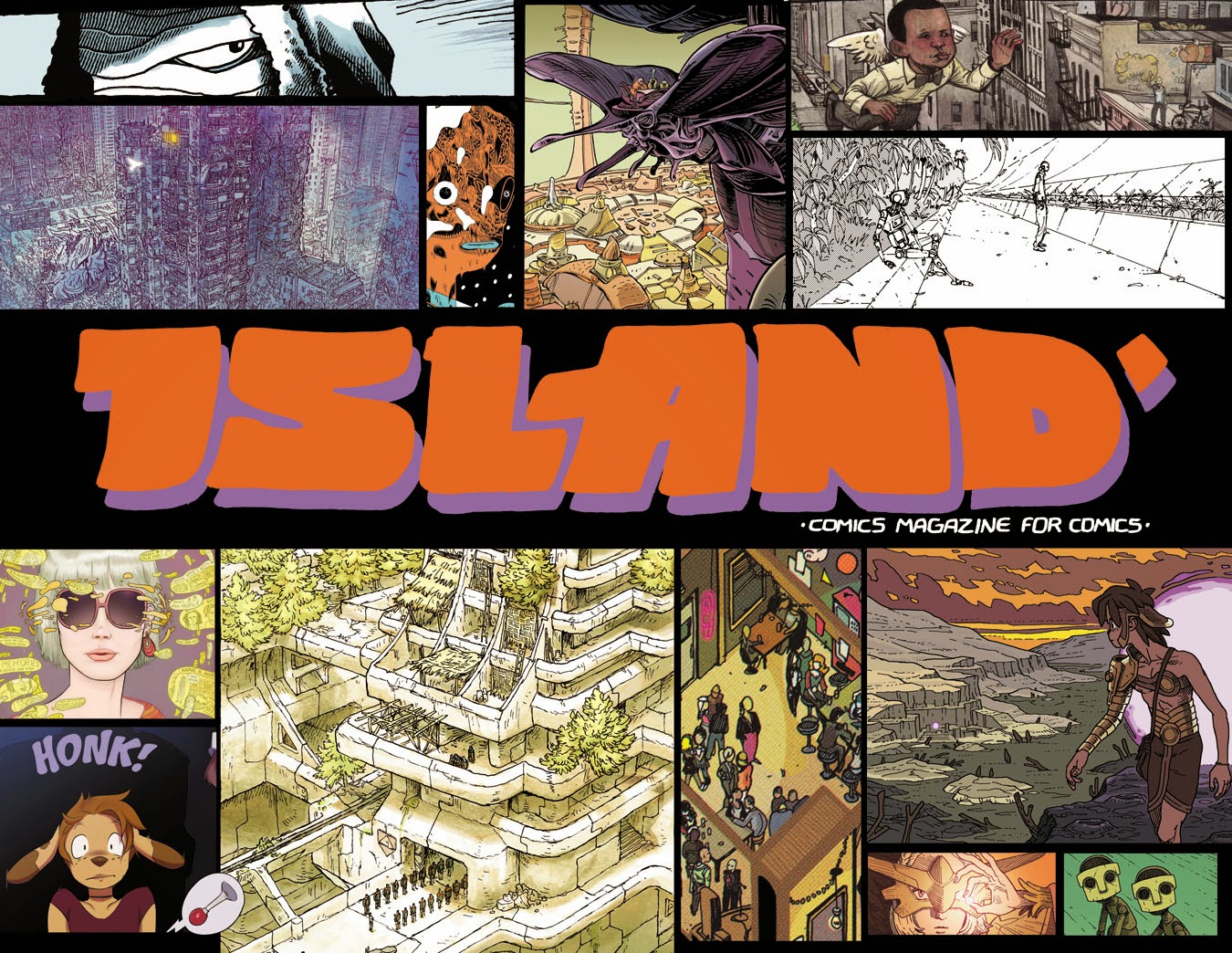 While Image are announcing this magnificent beast over in San Francisco way across the ocean, let me tell you from my grey corner of Yorkshire exactly why Island is going to be one of the comics projects to look out for this year. Spearheaded by the remarkable Emma Rios and Brandon Graham, Island is a new comics magazine releasing this June: a 72-page, oversized format monthly book that will see an array of international artists and writers from Michael DeForge, Kate Craig, Ludroe, Simon Roy, E.K. Weaver, Farel Dalrymple, Jose Domingo, Johnnie Christmas, Fil Barlow, Gael Bertrand, Lando, Amy Clare, Lin Visel, Onta,  Malachi Ward, Matt Sheean, Will Kirkby, Helen Mair and more (!) contribute concepts for imagined mech designs, fictional fashion ranges, articles that blend prose and comics, and of course, actual comics. Each issue of the magazine will open with a 4-6 page spread of illustrations- the first of which will be by Marian Churchland, the second courtesy of Will Kirkby.

'The idea is to make longer-form stories in each issue than you get in many anthologies,' explained Graham. 'The chapters will be 20 to 30 pages each. So it will be like a bundle of several comics in one book.' Island #1 will feature a story named ID by Emma Ríos, the return of Brandon Graham's Multiple Warheads, Dagger Proof Mummy by  Ludroe, the afore-mentioned series of illustrations by Marian Churchland, along with additional material. I'm incredibly excited by this new take on a comics anthology- a mix of European (Heavy Metal) and Japanese formulas in terms of thick comics anthology volumes (although done on a much larger scale there): a full-colour commitment and ode to comics- this is what feels fresh and directional. With that roster of artists involved, it's difficult to see it going wrong. On a personal note, I'm hoping -expecting- a Marian Churchland fashion spread - I've been admiring her clothes illustrations and wishlists on her blog for a long time. I'd love too, to see Jose Domingo take on one of those hyper detailed, humorous illustrative spreads, a la Adventures of A Japanese Businessman. And Farel Dalrymple. It's pleasing to see UK artist Will Kirby making more print comics- his work is spectacular. I could probably name each artists one by one, but I'll refrain. I think Island is going to be very special and I hope all this belief and effort in making something different from what's being offered currently is paid off with people picking it up and reading it.

In Multiple Warheads: Ghost Town, Sexica and her werewolf boyfriend, Nikoli, push deeper into the mysteries of the wailing wall and the ancient wizard who hides within its cliffs. Meanwhile, Emma Ríos’s ID explores the struggle of three different people who consider a 'body transplant' as a solution to their lives. A tale of identity that raises question of how to see or be seen, and about how deep serious matters can also become casual and frivolous. Do you like your body? Who does? Here's a look at the first seven gorgeous pages: 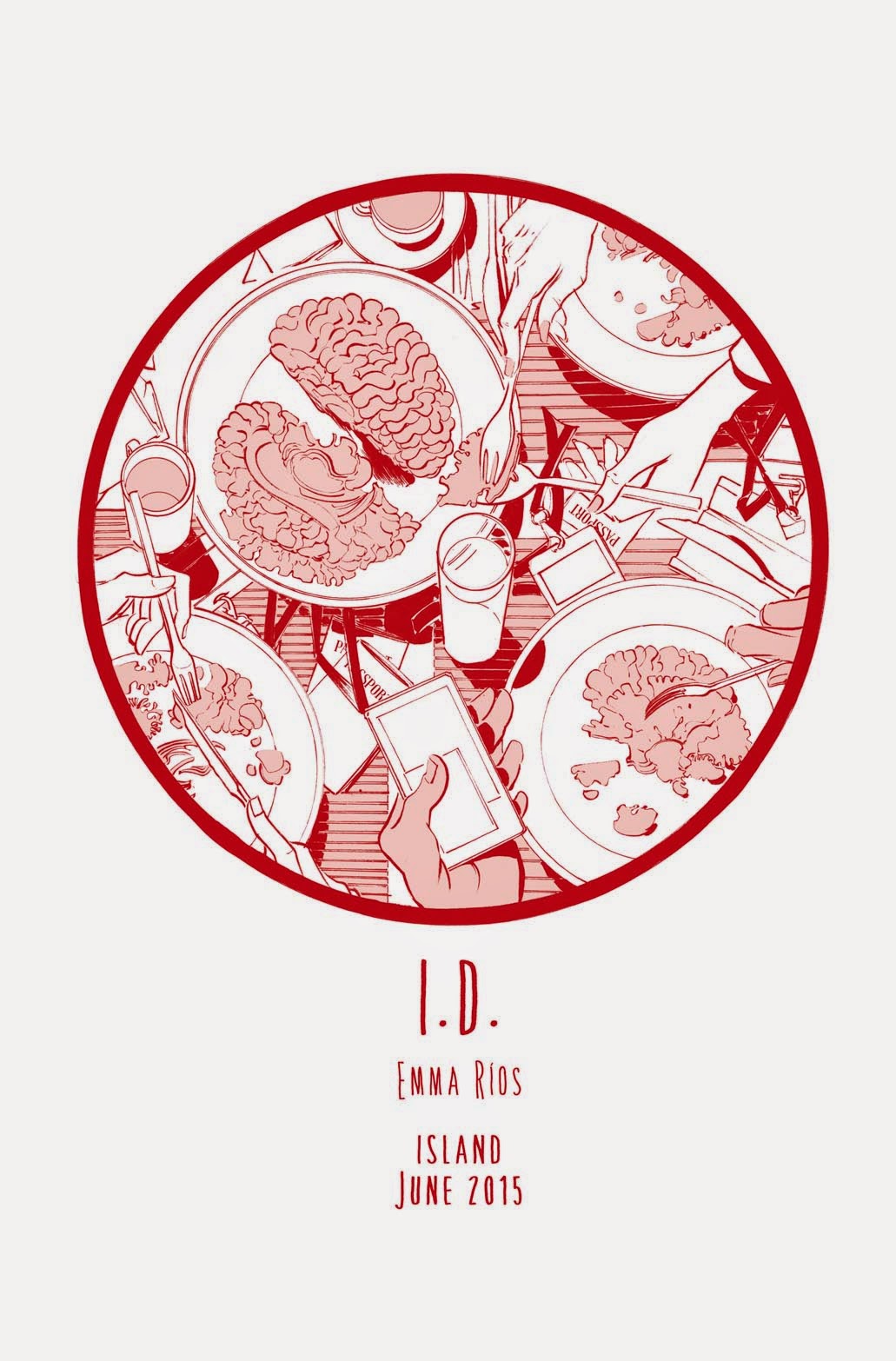 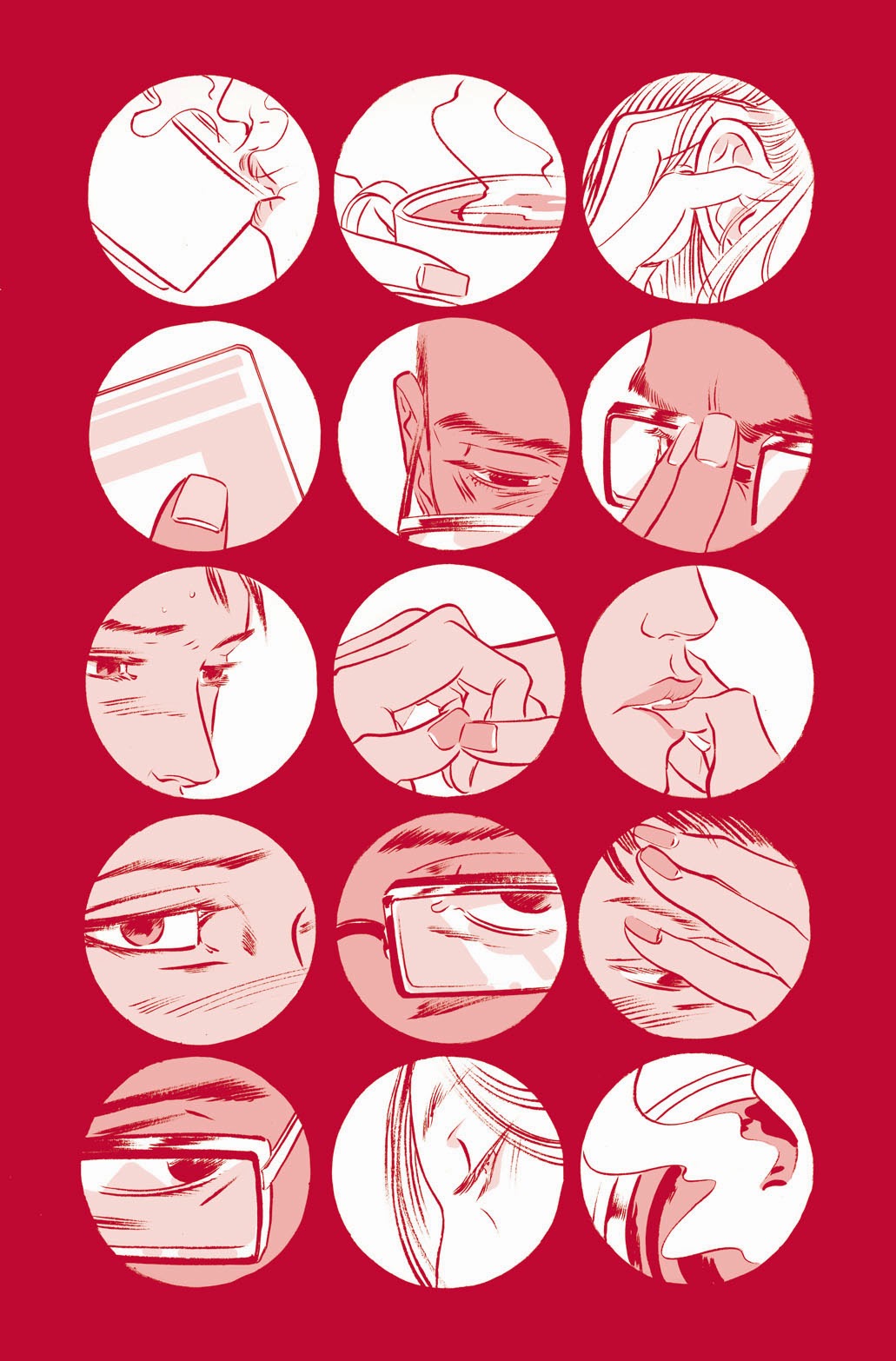 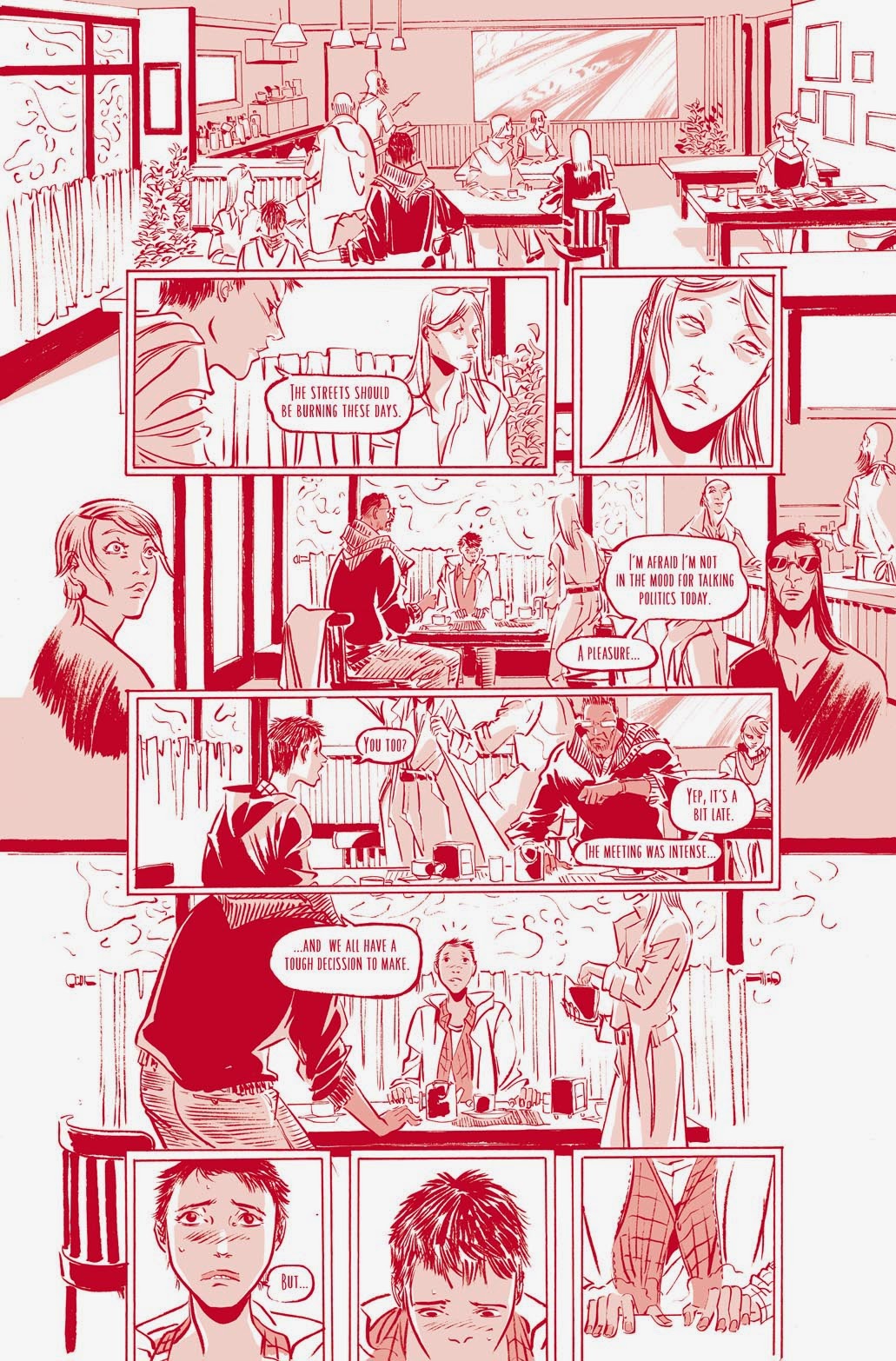 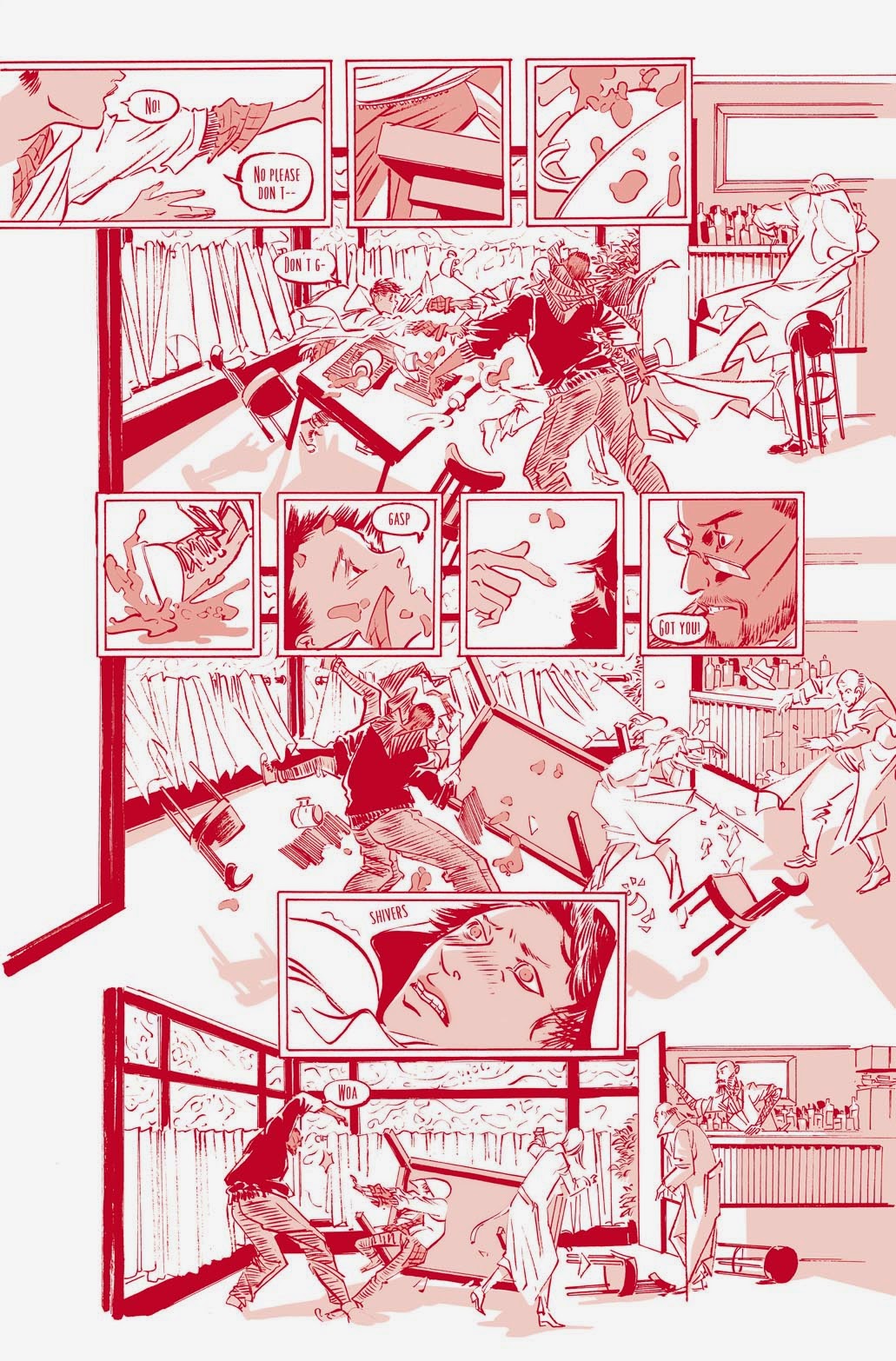 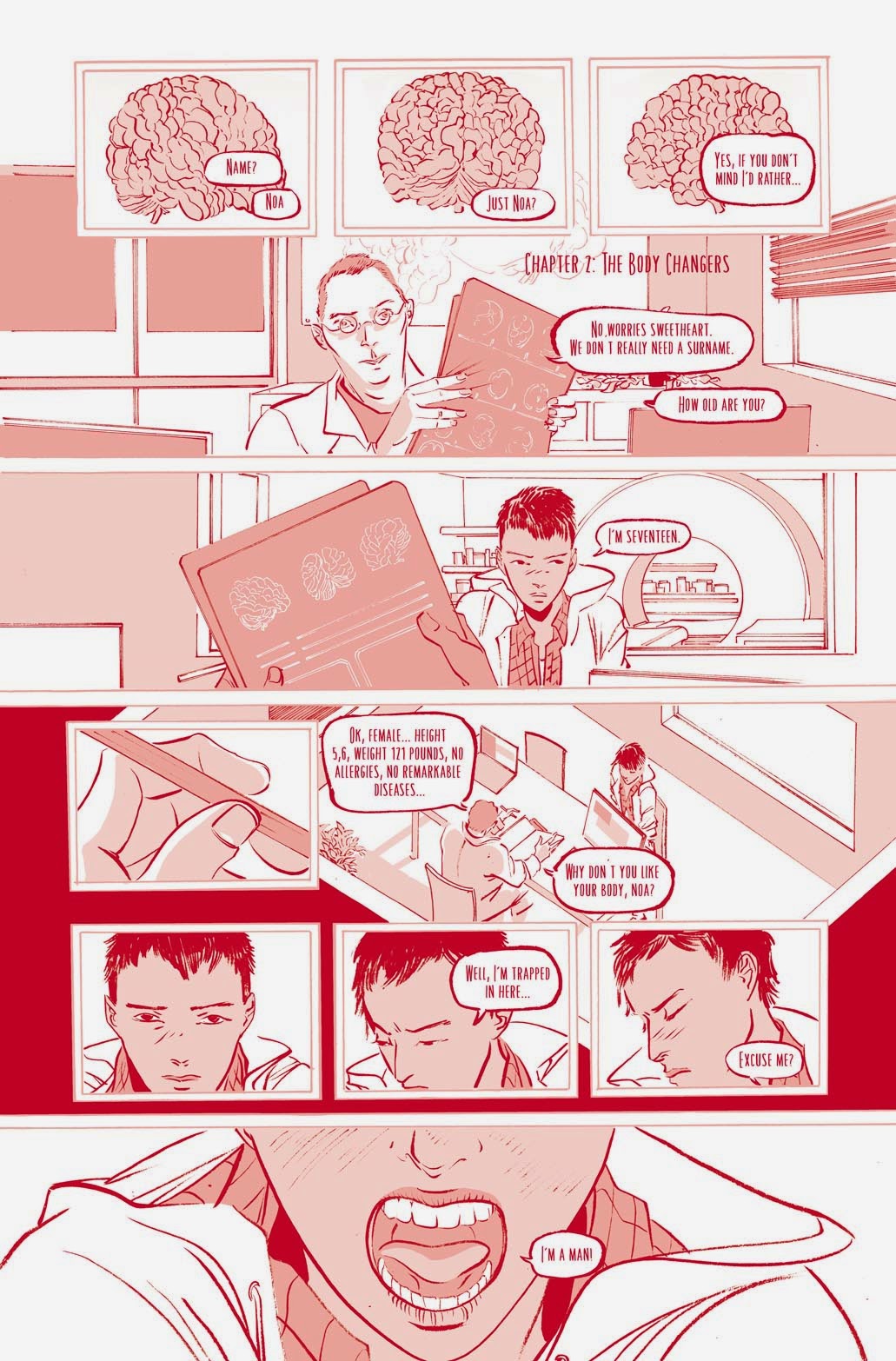 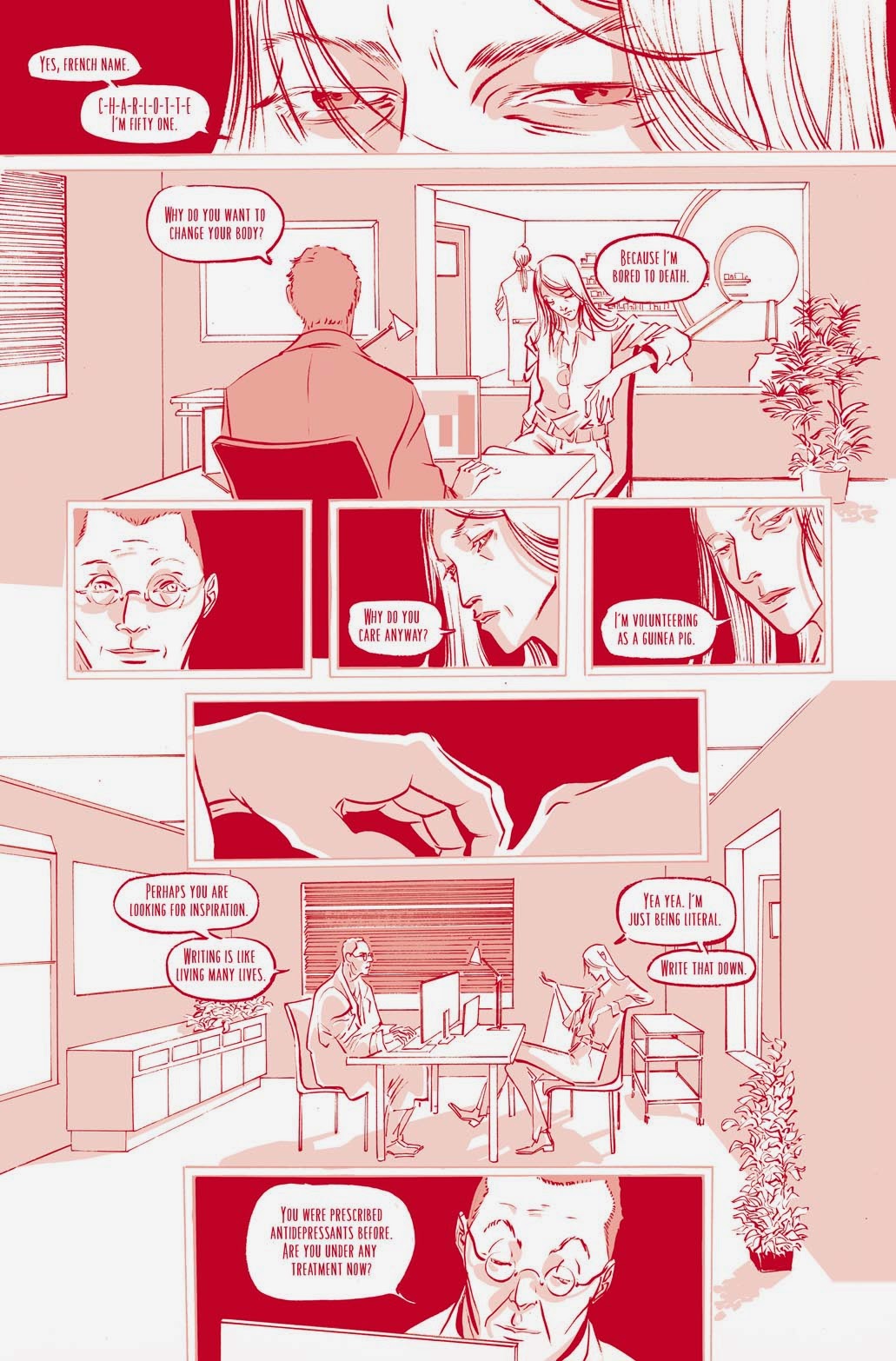 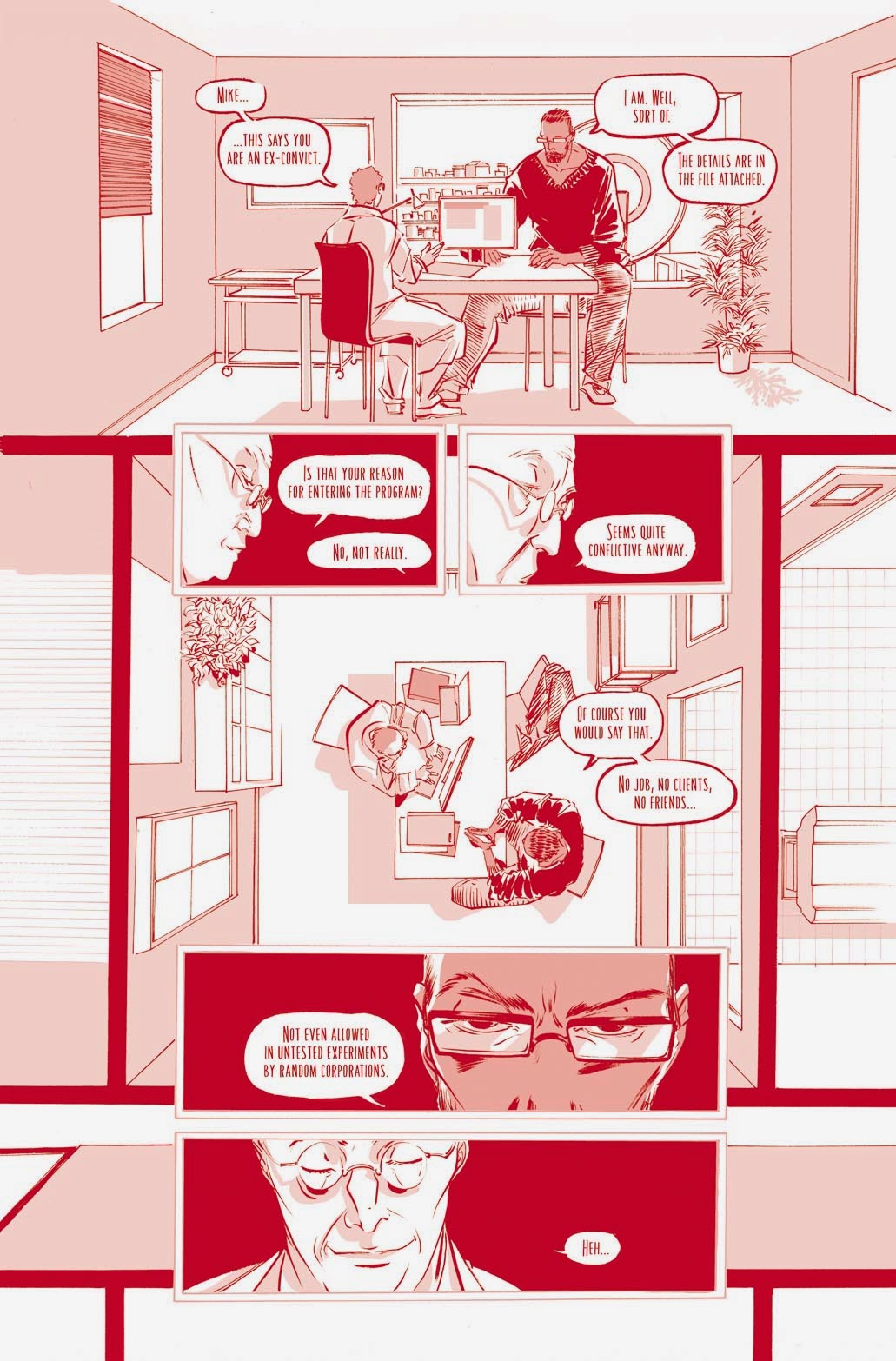 Brandon Graham's Multiple Warheads will return in the pages of Island: 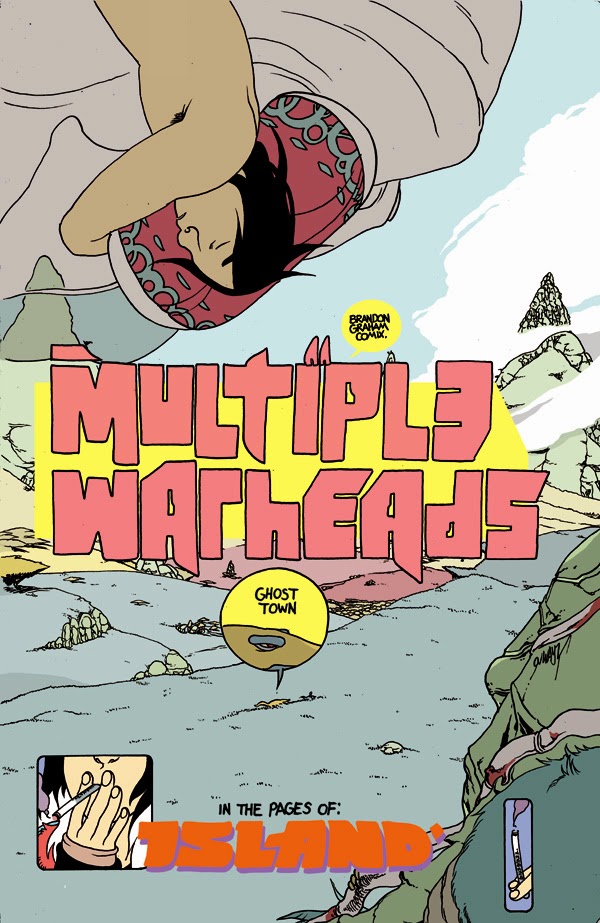 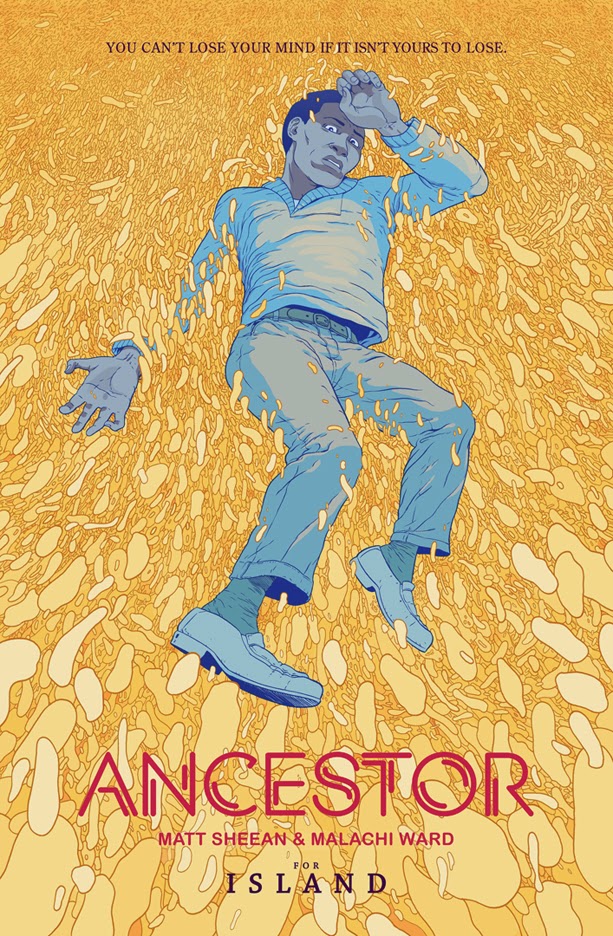