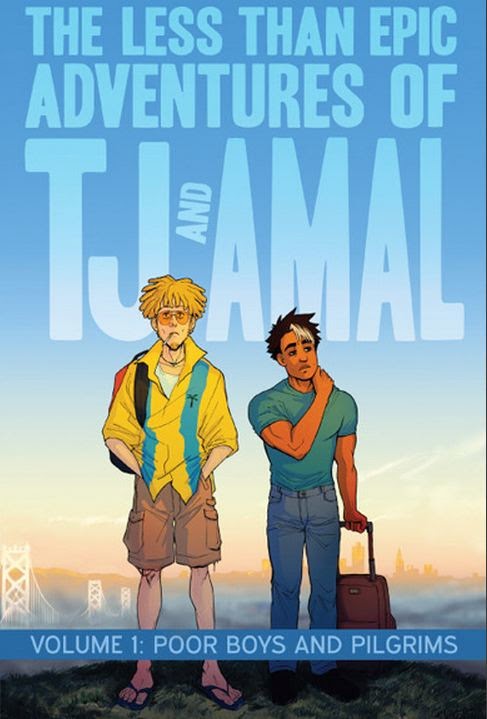 Iron Circus Comics announced their publishing slate for 2015 recently, and amongst a print edition for Ross Campbell's Shadoweyes, and a new volume of the Smut Peddler anthology, they will also be releasing a complete, omnibus edition of E.K. Weaver's TJ & Amal. Weaver began serialising TJ & Amal online in December 2009 and wrapped up the comic in May last year. Over those years, it's garnered a large following and critical acclaim and it's easy to see why. Although it's a simple enough premise and story, a 'road trip romance' in which two young men due to individual circumstances end up driving from one state to another (one impulsively, the other with more deliberation) over the course of the week, it's ostensibly a character piece that presents these two people, their personalities and the way they interact with one another as a growth and revelation. It also has one of the best silent chapters in a comic book that I've read, depicting the 'getting to know one another' stage and increasing closeness  between TJ and Amal, that is more eloquently done than in words. Weaver has been publishing print editions of the books as the comic has been releasing, with the complete run available in 3 volumes from her site, but this new omnibus edition is the first time the comic will be collected in one 500 plus page volume.

'In the span of a single day, Amal Chakravarthy calls off his arranged marriage, comes out to his conservative parents, promptly gets disowned, goes on a bender . . . and wakes up the next morning to find TJ—a lanky, dreadlocked vagrant—frying eggs and singing Paul Simon in his kitchen. TJ claims that the two have made a drunken pact to drive all the way from Berkeley to Providence. As it happens, Amal promised his sister he'd be there for her graduation from Brown University. And TJ, well . . . TJ has his own reasons.'
Posted by Zainab at 00:00