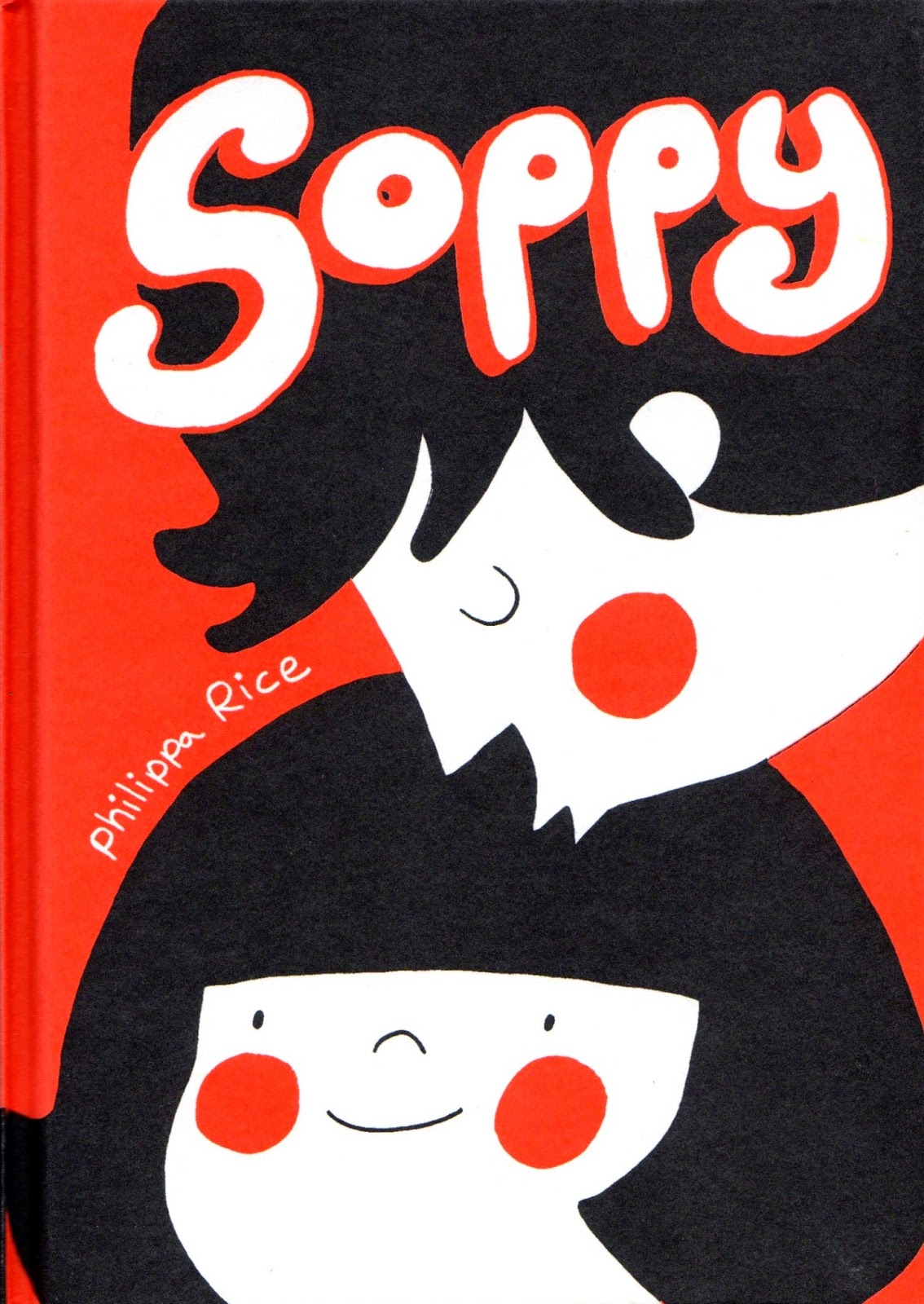 Soppy is a collection of Philippa Rice's striking red, black, and white comics featuring herself and partner, cartoonist Luke Pearson, as they meet, embark on a relationship and move in together. Rice originally began publishing these comics online in 2013 and in print in the form of a couple of mini-comics, to incredibly popular reception, and this volume collects all those strips and new material. It's interesting to note the slight change in delivery in the transition from web to print in relation to the culture of each; this is presented chronologically with a more traditionally liner narrative, where online the strips were shared on Tumblr in chunks, easy to share and digest, without need for greater context. The book captures the evolution of Rice and Pearson's relationship as they get to know one another a little, go on holiday together and decide to move in, all communicated via small everyday tasks, gestures, and interactions: assembling bookshelves, receiving their first letter addressed to the both of them, arguing over whose turn it is to make the tea, changing sleeping positions over the course of the night. From silent sequences, splash pages, to nine-grid pages, Rice charts a sweet, appealing, and warm portrayal of two people, their lives and their love.

And yes, that does sound gloopy and soppy, hence the title. But I think Rice manages to avoid complete sugar overload in showing these two characters as people in their own right, too. They're both freelance artists and so the division of tasks and time, working within the house in separate rooms, coming together for this and that, making sure things get done, sharing responsibility, compromising, is all shown incorporated. So although Soppy is about being with a person, about being in a relationship, it also underscores individuality; Rice presents both characters as engaging in their own separate tasks and spending time apart, they're shown working separately and two single, 12-panel page comics depict each going through a day from morning to evening. That double page spread is particularly cleverly composed: it can be read as individual pages from top to bottom, first the left page, then the right; with Rice's day on the left page and Pearson's on the right, or you can read it as one whole spread, all the way across, interpolating a passage of Rice's activities with Pearson's, with the panels that are split by the middle of the book working as one.

Soppy focuses on the positive aspects of a relationship, the efforts made towards one another, and I like that; that Rice has deliberately chosen to focus on what's good in a relationship, how people keep in sight what's good about the person they love, on what's going well, even as tiny irritations and annoyances are revealed. There is one evocative sequence that sees Rice out in the rain, crying, and Pearson doing the same in the house. She stops at a shop and asks for some chocolate milkshake, and then after a pause, asks for some vanilla too (an earlier comic establishes she like chocolate, and he vanilla). She walks home and both apologise to each other, the implication being that they've had an argument, are upset, but appreciate one another enough to want to move past it, to apologise and move on. For all who will view this as a saccharine effort, there are people like me who struggle everyday to remain positive in outlook admist a increasingly bleak world, and find it an admirable and enviable quality. But the little things are things you remember, the little things are what stay with you, it's the little things that build you brick by brick.

The humour in Soppy is very real- the kind of things people would actually say to one another in conversation. Him, lying in bed: 'I think I should warn you that one day... like, when we're older... I might want to be a vegetarian.' There's a great 2 page exchange where they go back and forth over who should make the tea, at first each suggesting the other should make it, then each relenting and having a very British faux-polite comedy of manners: 'I'll do it,' 'No, no, I'll do it,' before Rice gives in and 'allows' a bemused-looking Pearson the win of making the tea!

What grabs me the most is the visual strength of Rice's art- yes, it's cute and round and lovely to look at, but there's a lot going on here, and so much to look at. Rice is an immensely talented and versatile artist who works with sculpture and textiles and collage, and that smorgasbord of knowledge transmutes into her work; she uses so much pattern to provide interest and lift scenes: stripes and dots, hatchings, checks, on clothes, bus seat upholstery, cushions, bedding, and to eke out various textures: the shagginess of a carpet, the softness of a blanket, the gloopiness of cream. Food is lovingly drawn and detailed in supermarkets- simply but always with enough detail for recognition- this book may well make you hungry. She uses the colourway so well too- red and black can be an overpoweringly rich pairing, but the addition of the white/cream neutralises that effect. One of my favourite images is a single page of the two out for a walk in the park; the thick, smudged, brambly black inks of the trees in the foreground, the bright red blobs of poppies splashed about and in the middle the couple walking on a swathe of cream grass. there's lots of strong images like that- Rice's deft touch with her material, her visual literacy combined with the strength of the colours, pay off in images that can be pulled out and function without context, resulting in the creation of a work that's universal in reach- that's a sign of a very, very good artist. 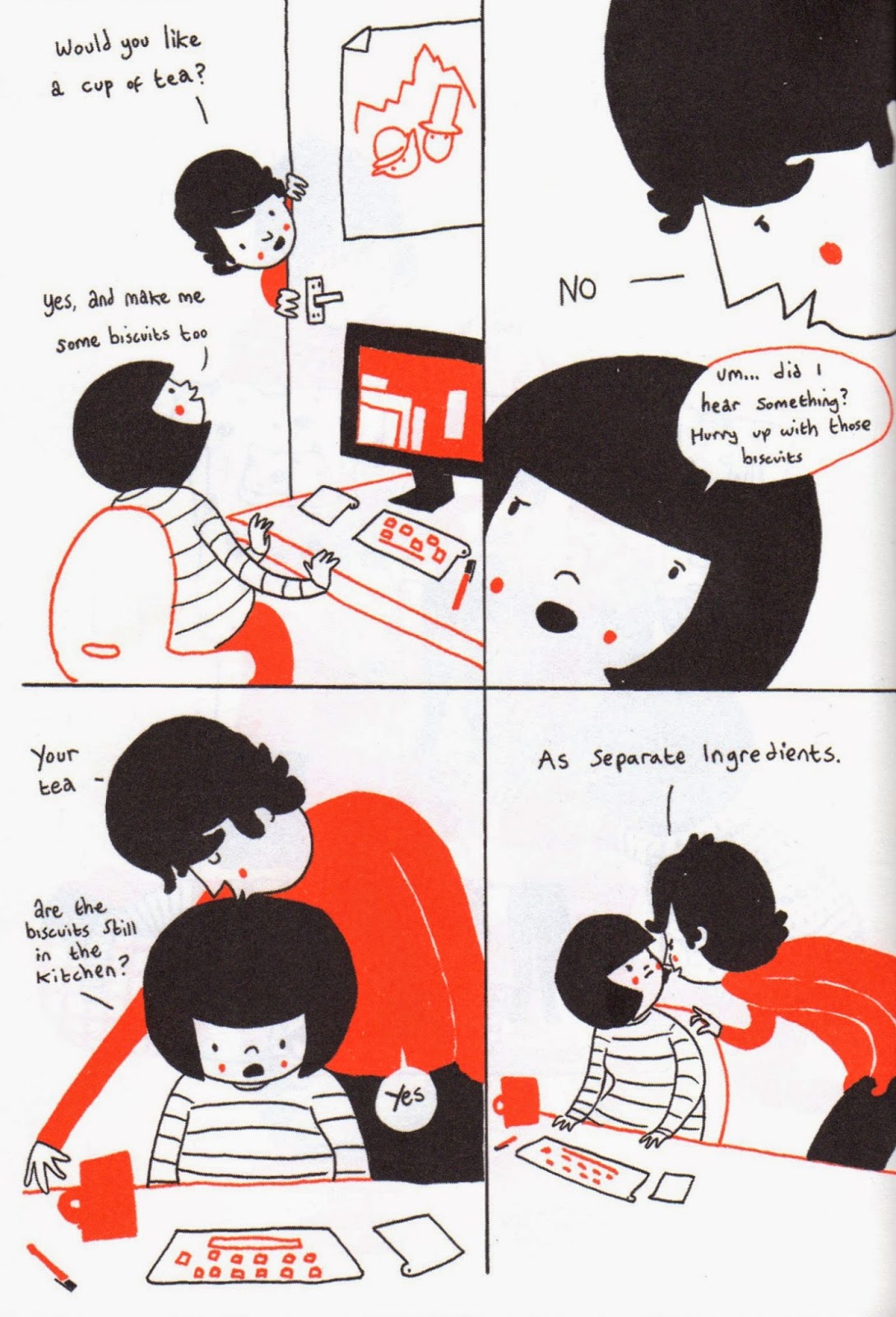 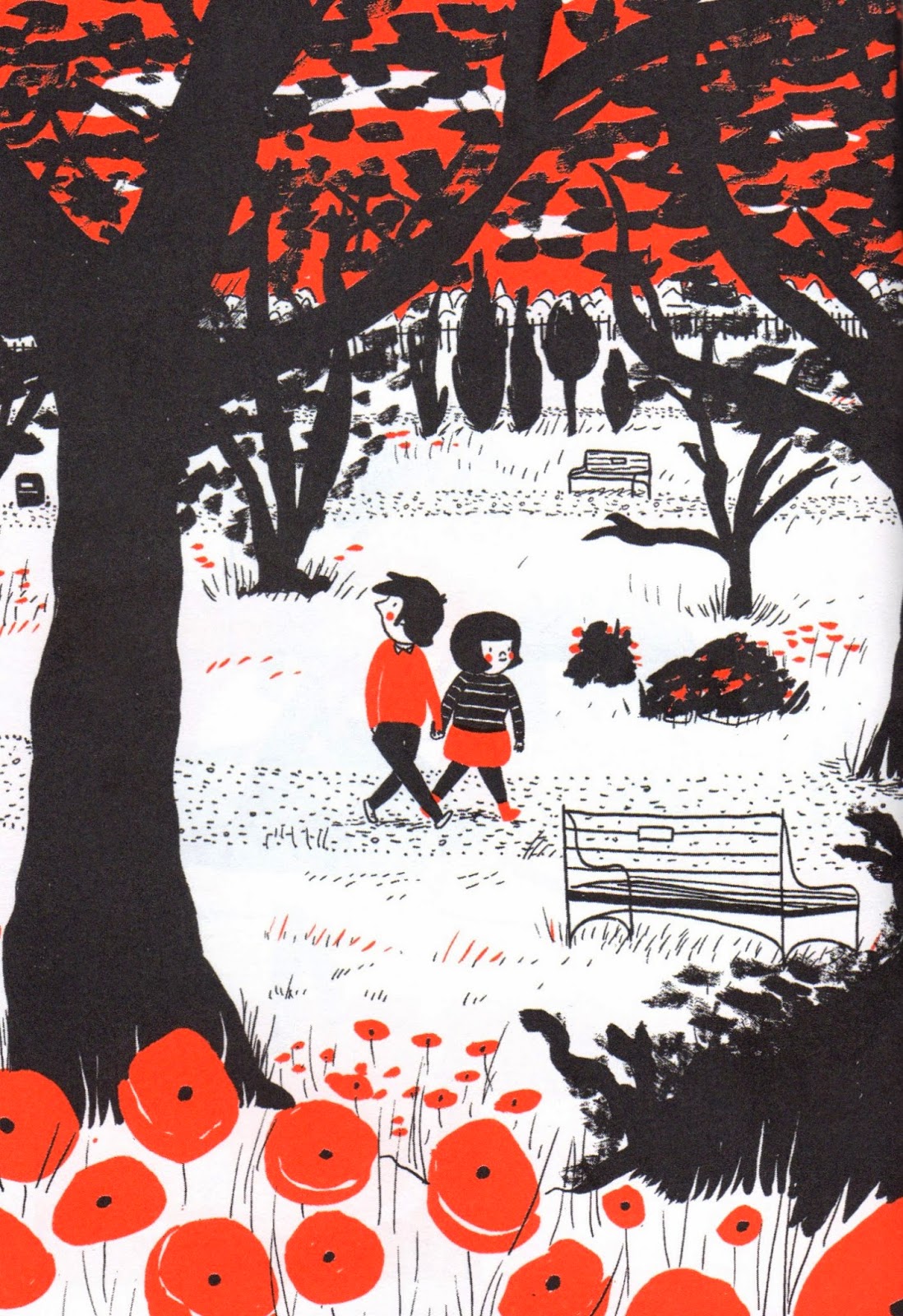 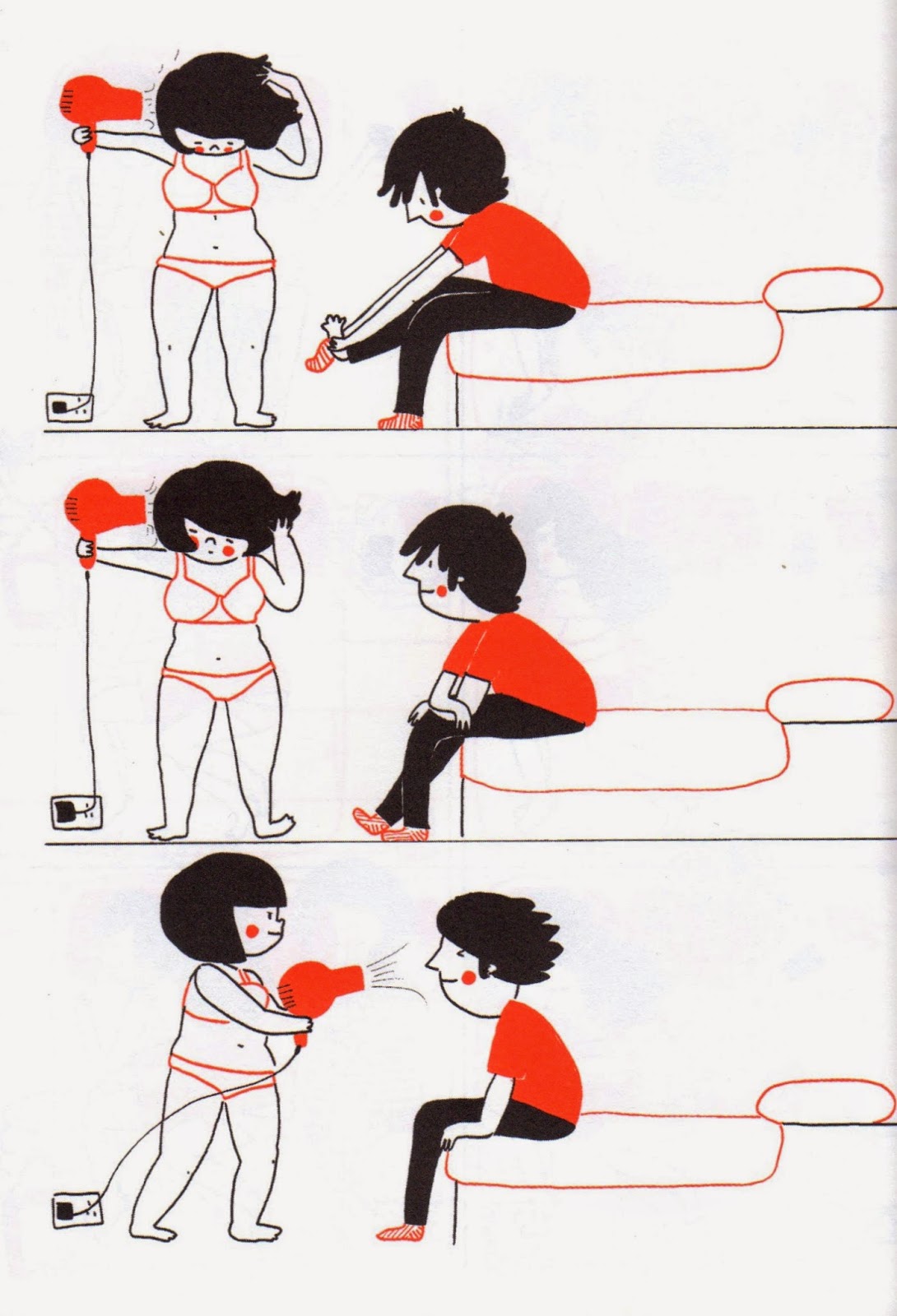 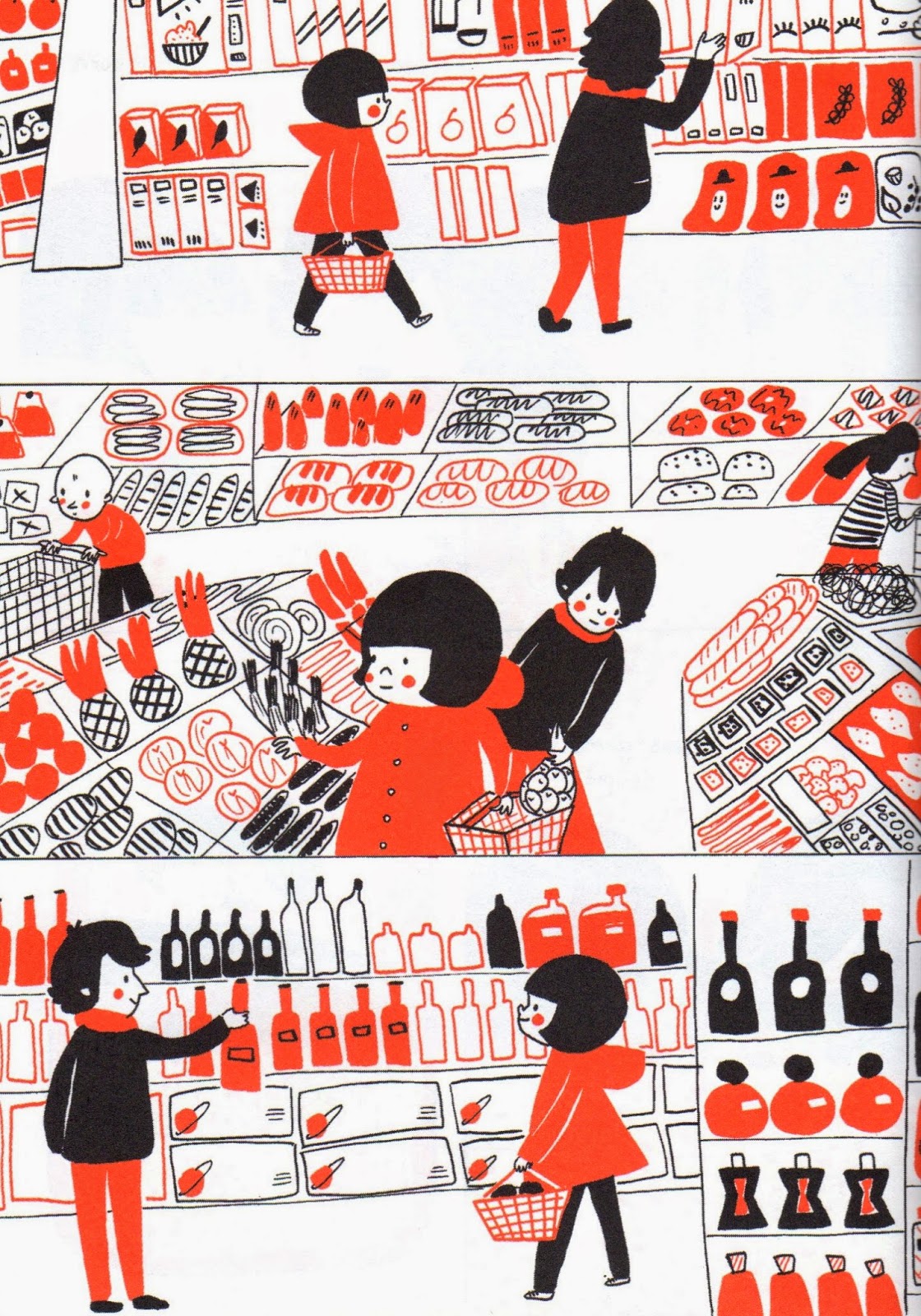 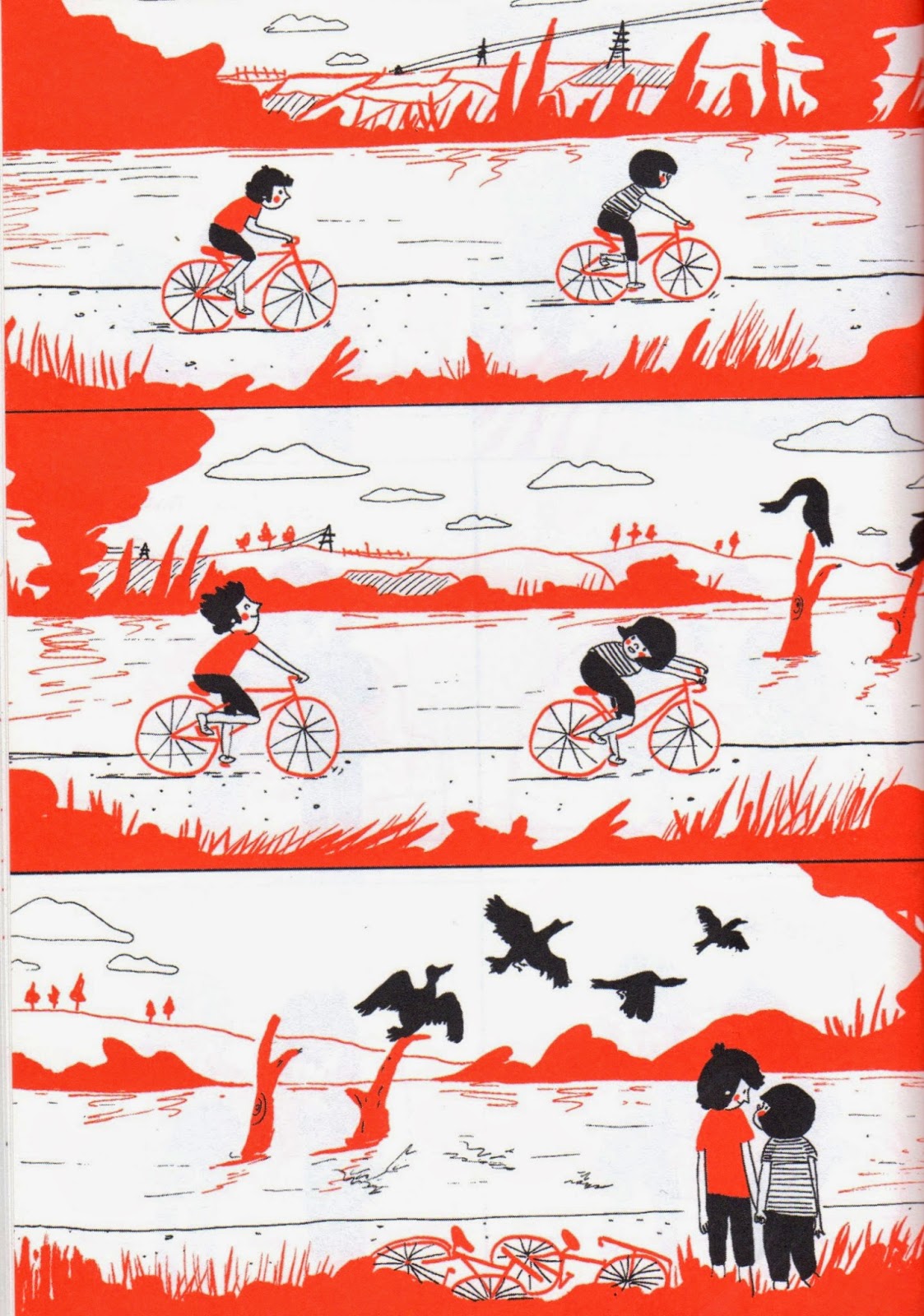