Looking around my room, flicking through books to see what might catch my eye for the next 'Take 3 Panels' and nothing really striking or interesting commanding the attention. Instead, I sit down to type up a little piece on some Batman trades DC are putting together of Blink and Dark Knight, Dark City, and I see the poor, distastefully recoloured version of Mike Mignola's cover (more of which at the end of this piece) and think to myself a) what folly, what shame it is to ruin it, and b) what a grouchy atypical comics fan I'm becoming. Because I'm diligent *cough cough* I have the 3 issues comprising Peter Milligan, Kieron Dwyer and Dennis Janke's run next to me at the time of writing, and I look at the Mignola covers, sift them apart, admire them, and take a moment to despair a little inside once more. I also realise there's 3 of them, so here we are with a covers edition of take 3 panels, where I'll be deconstructing and discussing covers in lieu of panels for a change.

The comic: 'Batman: Dark Knight, Dark City' by Peter Milligan, Kieron Dwyer and Dennis Janke. Covers by Mike Mignola. Batman #452-#454, 1990.
The story: A Riddler story, and a weird one... 'Batman is led through a labyrinthine urban maze by his old nemesis the Riddler, who seems to have changed into an abominable monster with one purpose: to drive Batman insane! In his quest, the Riddler is working with an occultist who has summoned a demon to stop Batman - but in the process, the Riddler himself is slowly changing into a nightmarish beast!' 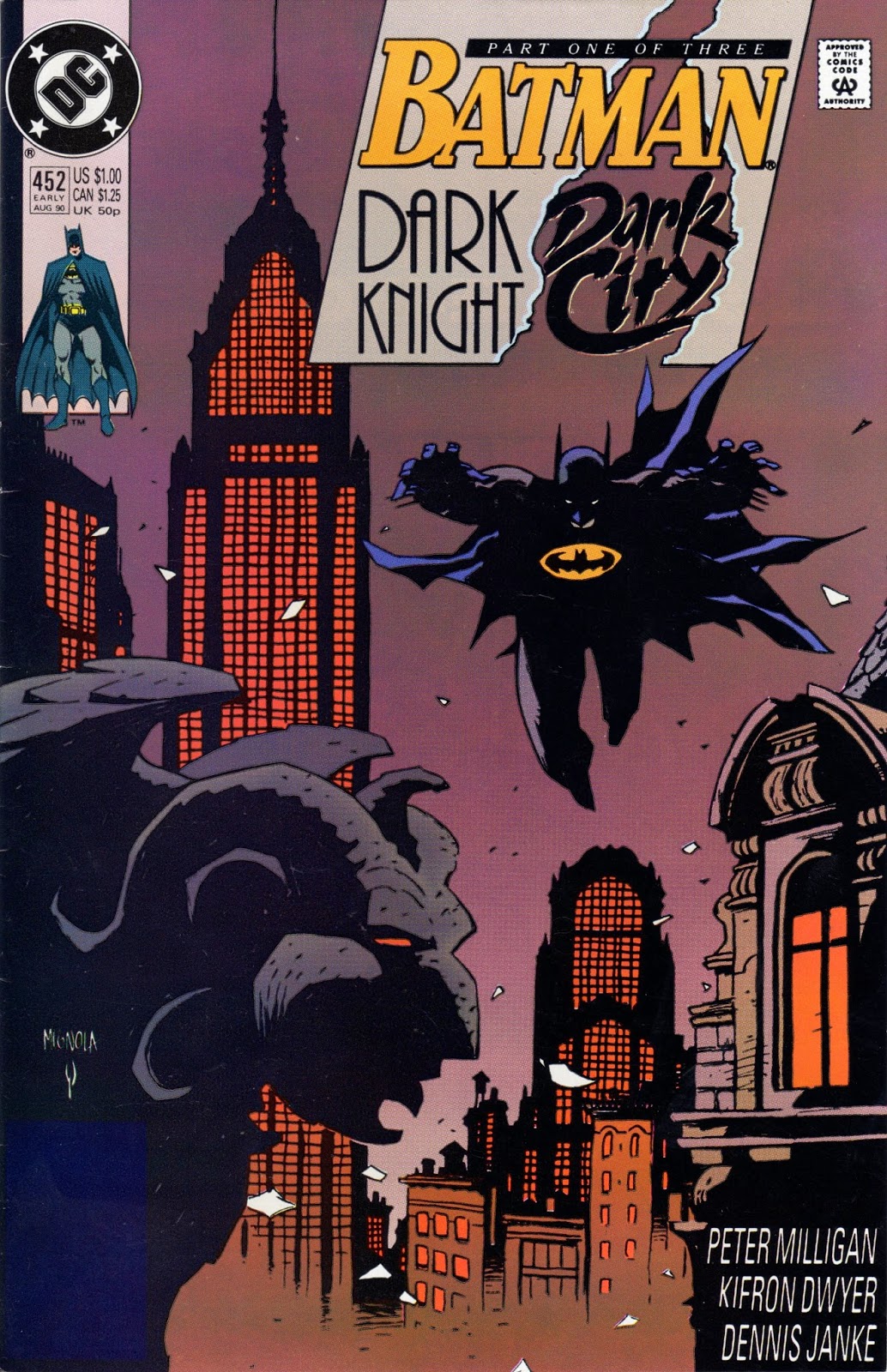 To begin with some composition and elements that are repeated on each cover, in the top left corner you have the price and renumeration tab-strip with the old DC logo (remember that? So easy to see the hold of nostalgia in some cases) and a little figure of Batman below it. The vertical column lining up of those is nicely balanced: circular logo, followed by a space for price and issue number and then the Batman icon; both the logo and Batman are in relative proportion to the strip- the circle acts like a stamp/seal placed on top, covering it (making it fit exactly would look odd, and if it were sized within the strip it would leave an outline band of pale colour which would look poor and throw off composition), while Batman's contained mostly within it, only his feet and the edges of his cape moving beyond the strip, and gain to fill and provide contrast between the dark and lighter colours. The tab on the whole works well as a neat anchor: publisher, title connoted by Batman, pertinent details for purchase. It's an equally effective and aesthetically pleasing alternative to horizontally running mastheads such as the one seen on Tintin and so forth. Comics Code Authority stamp in top right corner, author accreditation in bottom right.

On the one hand, this looks like pretty standard fare for a Batman cover. After hours Gotham city-scape, those famous gargoyles, Batman swinging through the night, but when you look at placing, it takes on more curious meaning. The two aspects here that the eye is drawn are the two largest: Batman and the gargoyle. The gargoyle is curiously positioned prominently in the foreground, and coupled with the fact that Batman appears to be jumping at it in attack- arms and hands outstretched teeth bared- rather than swinging to it, makes you wonder as to its significance, of which a hint is perhaps indicated via the orange light of the eyes (it may be alive). A base conclusion to draw from the wings and horns suggests a demonic being of some kind. That orange is picked up from the lights of the buildings around them, cleverly arranged so the skyline lowers conveniently where Batman is poised in the air on the right, while taller buildings are placed on the left in the background behind the gargoyle, freely jutting upwards. The two other colours of note here are the pink sky, and the light hitting the blue tips on Batman's costume, both of which tie together with the use of orange; the colour palette is warm, the scene almost idyllic, really, within context, even the gargoyle seems benign- as usual it's Batman who's providing the movement and drama and pushing at further possible meaning. 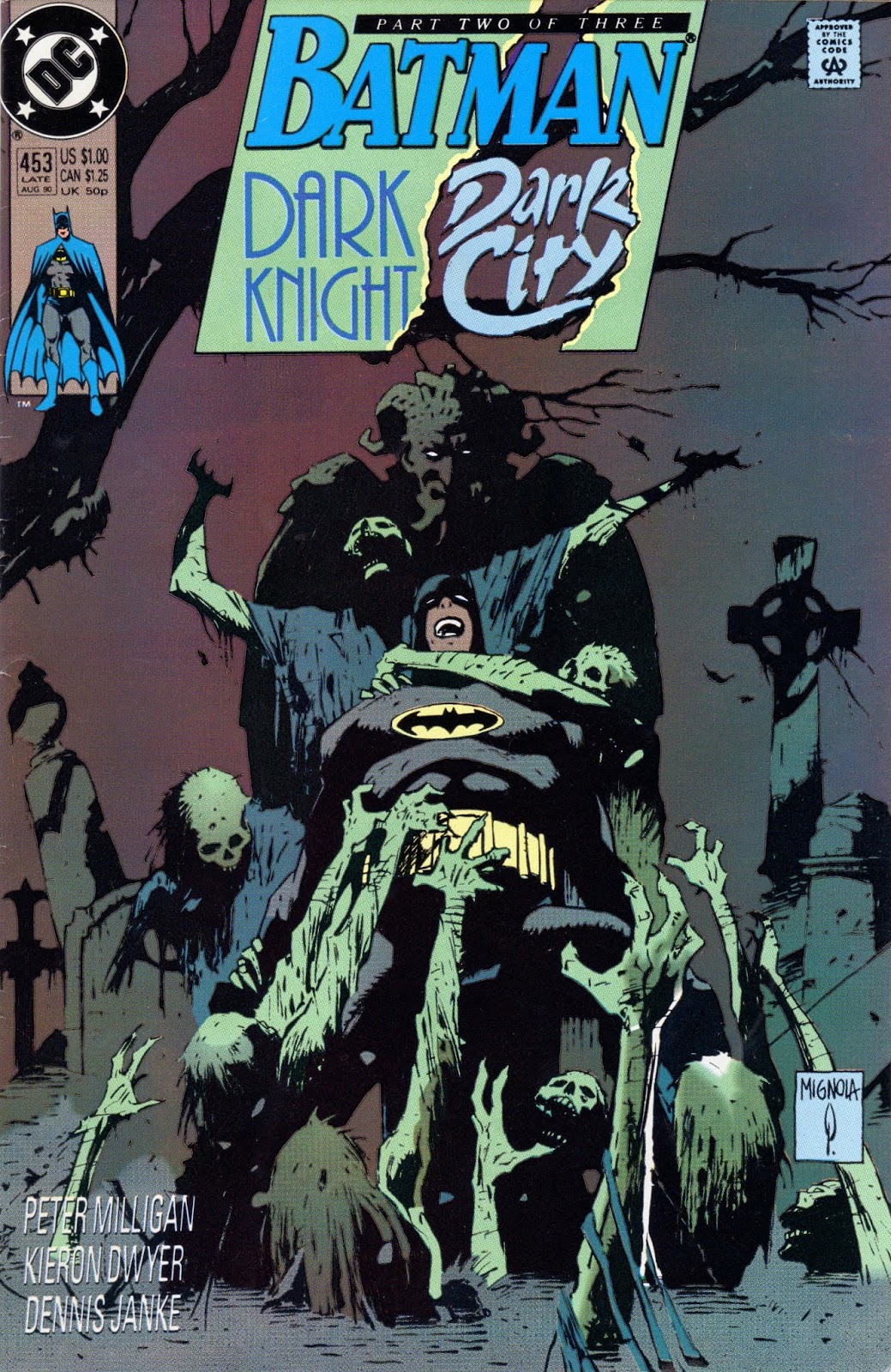 This is sort of a classic gothic horror mis-en-scene: the zombie/skeleton/undead hoardes rising from the grave in a cemetery to embrace the protagonist in their lumbering, yet fatal clutches. Both Batman and the horned/winged demon are positioned immediately centrally, and it's still difficult to tell whether the demon is a live entity here or a large and foreboding choice of headstone or statue. Either way, he's larger, placed behind and above Batman so in a dominant pose of power, while the white of his gaze appears to be staring unnervingly straight out at the reader. The whole thing plays out as an inverse, twisted pieta of sorts: you have the dead grabbing (cradling) the alive: Batman, and wanting him dead, where traditionally in a pieta you would think Mary is wishing Jesus back to life. That image is compounded somewhat by the the zombie figure behind Batman who has him arms thrown out wide, his head back and seems to be wailing in distress or howling in glee; it's hard to tell.  It's framed by the overhanging arch of the tree branches coming in from the left which cross all the way over to the other side of the page, which also serves to provide a filler for that top third space overhead. Mignola's in his sandbox doing all these spindly, shadowy bits.

The colour scheme changes to more ominous: there's some area of the pink sky of the first cover here, on the left side, but it's being taken over by the darker blue hues- you can get a grasp of where it's headed by taking your cue from the title lettering: the 'Batman' switches from orange to blue and then green in the final and third cover. Interestingly, the colour scheme of each cover leads into the next, so where blue was previously indicated and is now present, here the animated corpses take on greenish hues. That green is reinforced in the other element that's repeated on all three covers: the title banner. It's the only feature that doesn't really sit as harmoniously as all else; you have the Batman across the top, which is fine, then 'Dark Knight' to the left below that in a thin architectural font, and 'Dark City' on the right in a painted brush style- an attempt at graffiti? The block of backdrop colour behind this title is torn like a paper, the 'Dark City' bafflingly painted on this... absence of paper, in what I'm guessing is a parallel to the Riddler leaving clues, but it doesn't quite work. The font is poor, and the execution nonsensical- it's a slightly jarring note in otherwise beautifully rendered pieces. 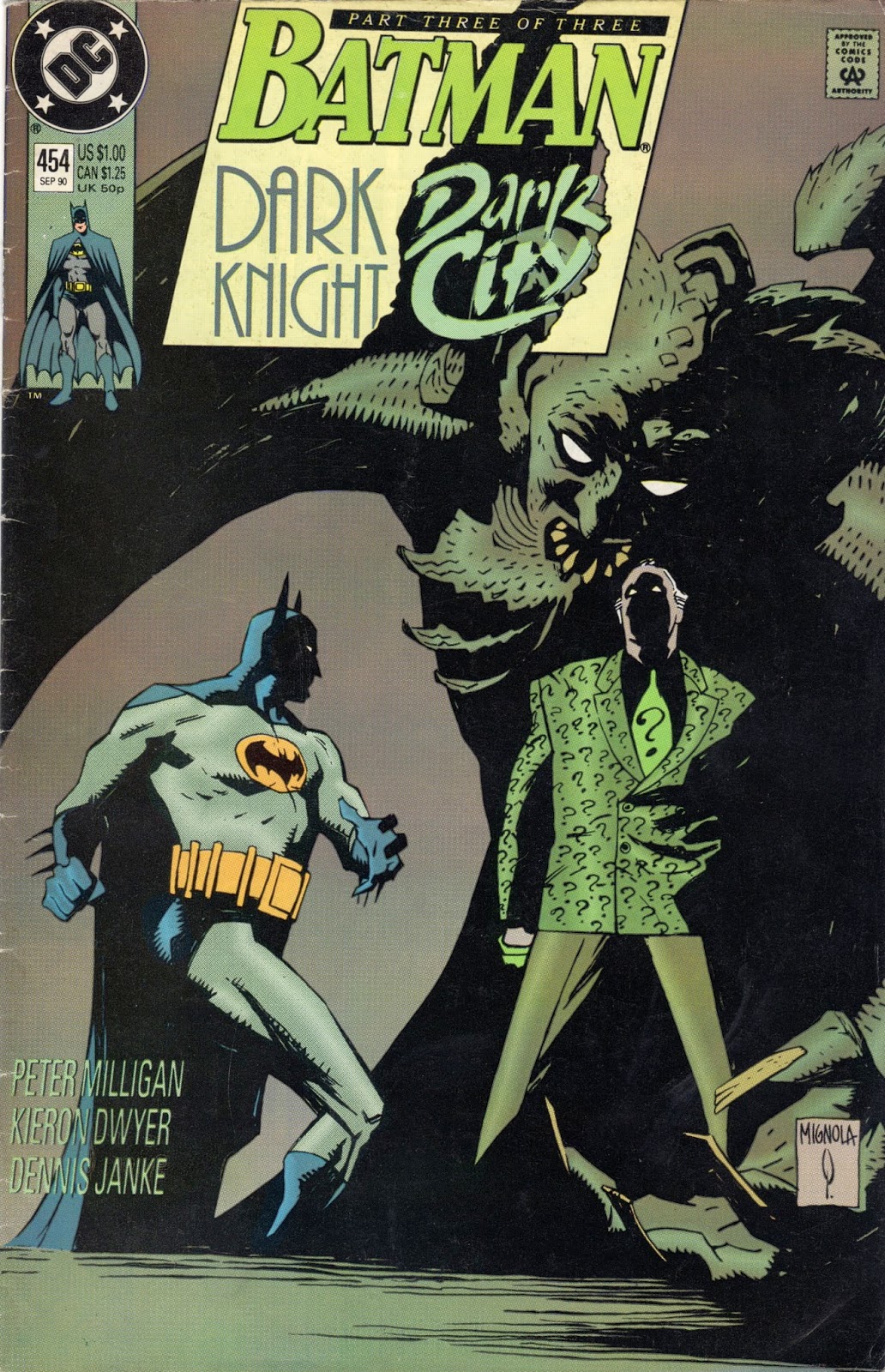 Another facet I like about these covers is that they're a narrative triptych in of themselves: you have the first acting as a point of cataclysm, then the middle finds Batman in trouble, and here it's the final showdown with his foe. By now, the demon's been established as a real, full-blown malevolent presence and his gigantic form looms here behind the Riddler, his head tilted close towards him- he's on his side, or controlling him in the least. His empty white gaze is directed at Batman and the mouth full of sharp, pointed teeth now clearly visible- he's a threat and an enemy. Riddler's autonomy is bought into question (a riddle, you see): his face is in shadow so we can't see if he's himself, his white, fixed eyes mirror the demon's, and his stance appears to be rigid and static. Over on the left, Batman is posing up a storm; right leg bent forward, weight on the left, turning at the waist to point his chest at the reader, but eyes on the prize. His right hand is all ready for punching and fisted up, but his left is open- the stance and the hands suggest Batman's uncertainty at how best to proceed, or to what exactly he's dealing with. He's placed in the spotlight as the hero, as an opposite to the Riddler literally under the wing of the beast, whose clawed hand lays outstretched, ready to intervene.

Where in the second cover you can't see the blue in Batman's costume at all, as he's overwhelmed by zombies, here his full regalia is once more apparent, symbolic of the restoration of hope and closing the colour circle by linking back to the blue swooshes in the first cover.


As I mentioned, this post was prompted by a browsing session on Amazon, which shows upcoming trade paperback collections of Dwyane McDuffie's, Val Semeiks' and Dan Green's 4-issue 'Blink' as well as 'Dark Knight, Dark City'; I believe this is the first time both are being collected in book format. I'm not sure whether they'll reproduce all 3 Mignola covers as part of the material within, but as you can see below, they're using a recoloured version for the main cover, which sucks all the atmosphere and actual art out of Mignola's work. In terms of story, I actually much prefer 'Blink,' a Legends of the Dark Knight story about a blind man who  has the ability to see through the eyes of others, and is used by Batman to tap into the mind of a killer he's chasing around Gotham. That releases on March 3rd, and 'Dark Knight, Dark City' on February 24th. 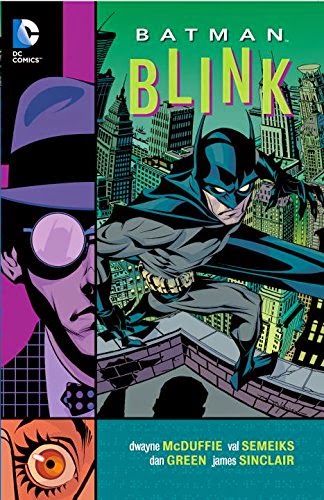 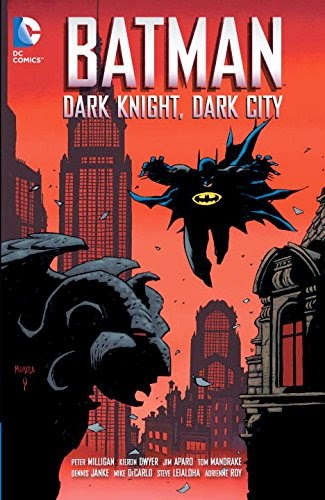