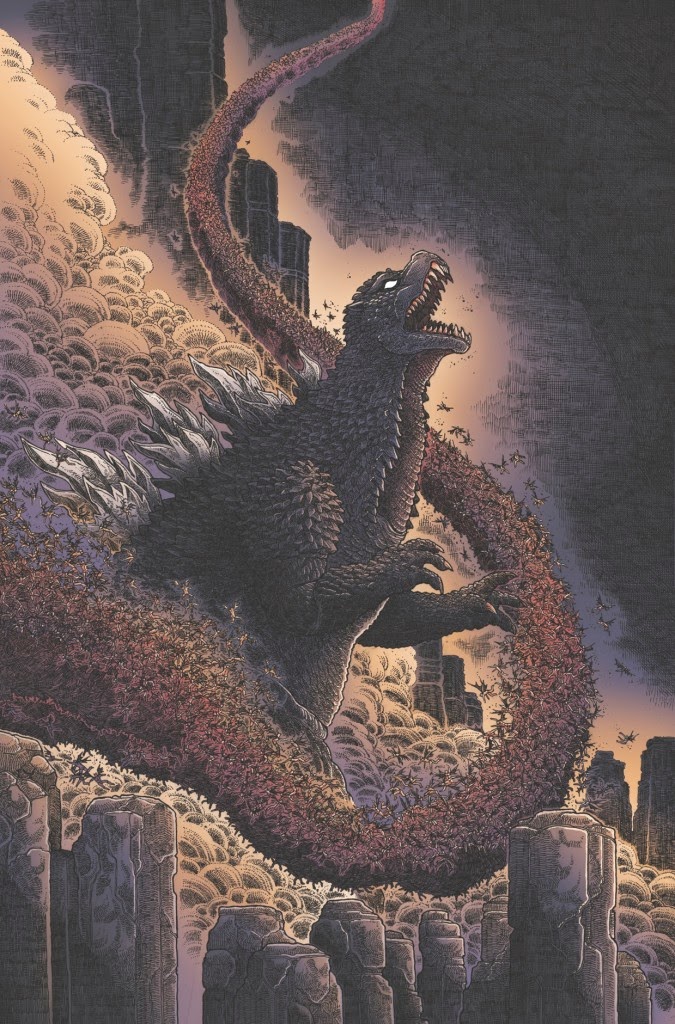 IDW's and James Stokoe's 2012 Godzilla: The Half Century War mini-series was instrumental in making me love the character once more, in addition to being a superb comic in and of itself. While the publisher puts out a regular Godzilla -I believe monthly- book, this newly-announced 5-issue mini-series sounds like it could be something special, partly because it sees the king of monsters in previously uncharted territory: Hell! Set to release in July, it finds Godzilla suddenly plunged into the deepest bowels of Hell, where he must survive amongst unspeakable horrors, attempt to discover what has led to his damnation, and whether there is any hope of salvation. The premise of this sounds like the kind of out there crazy that has the potential to sweep you along and work really well, or fall flat; I really hope it's the former. Although it does raise questions like: does Godzilla have a soul?

What's particularly enticing about this mini-series is that it will see a rotating team of artists and writers work on different issues, as Godzilla works his way through the various levels of Hell, with none other than blog-favourite James Stokoe returning to author the first issue. I personally prefer Stokoe's work when he's working on licensed properties, and as his Avengers 100 special issue showed last year, he's more than capable of producing something exceptional even in a single issue, so to see him back on Godzilla, a character he's previously done such excellent work on, is fantastic news, and well worth looking forward to. 'Drawing Godzilla must be my comfort food, because it feels really great to come back and work on pages with IDW again,' said Stokoe. 'Also, the list of amazing creators they've tapped for this series beyond my issue feels equally great as a fan, especially with the theme everyone gets to play with. You can't get much bigger than Godzilla versus Hell!'

Successive issue will see writer/artists Bob Eggleton and Dave Wachter take on an issue, with writers Ulises Farinas, and Erick Freitas, together on issue #3 and Brandon Seifert, tackling issue #4; artists on those issues will be announced at a later date. Multiversity have an exclusive look at the Jeff Zornow's EC variant cover, which looks amazing.
Posted by Zainab at 16:06