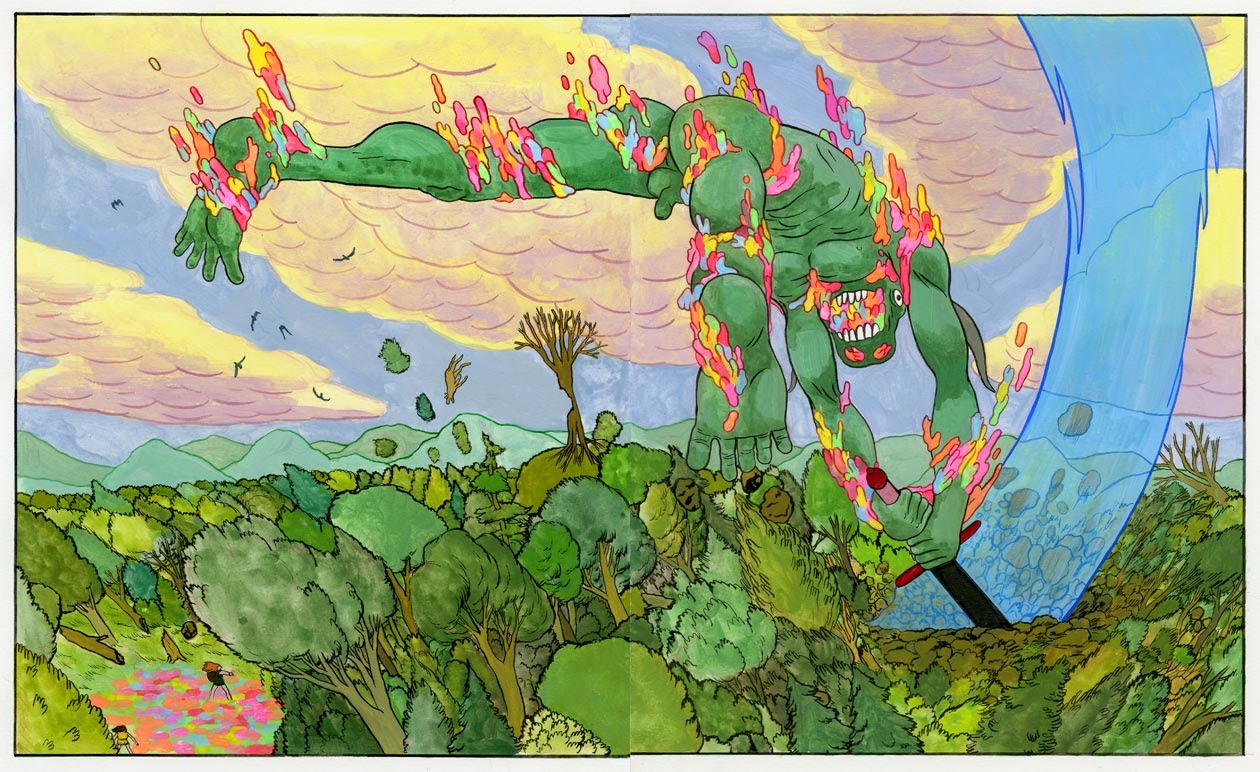 It's been a while, I know, but I finally managed to rouse some interest in the blog again, which has translated into lining up about 10 comics shelfies, the first of which is now presented here for your reading/viewing pleasure. This week it's ace Forming cartoonist and Adventure Time writer and storyboard artist Jesse Moynihan showing you around his book and comic collection, and discussing some of his influences and beyond: have you seen his floor tiles? (Jesse's introduction here makes me think there should be an accompanying series called comics cribs, but I'm not sure cartoonists are ready for that kind of glaring light to be shed on them). Anyway, without further ado, over to Jesse:

'Hello this is my 2 bedroom bungalow house in Echo Park, Los Angeles that I share with my brother Justin. We collaborate on music and sometimes writing. Anyway most of the books in our living room are mine for some reason. 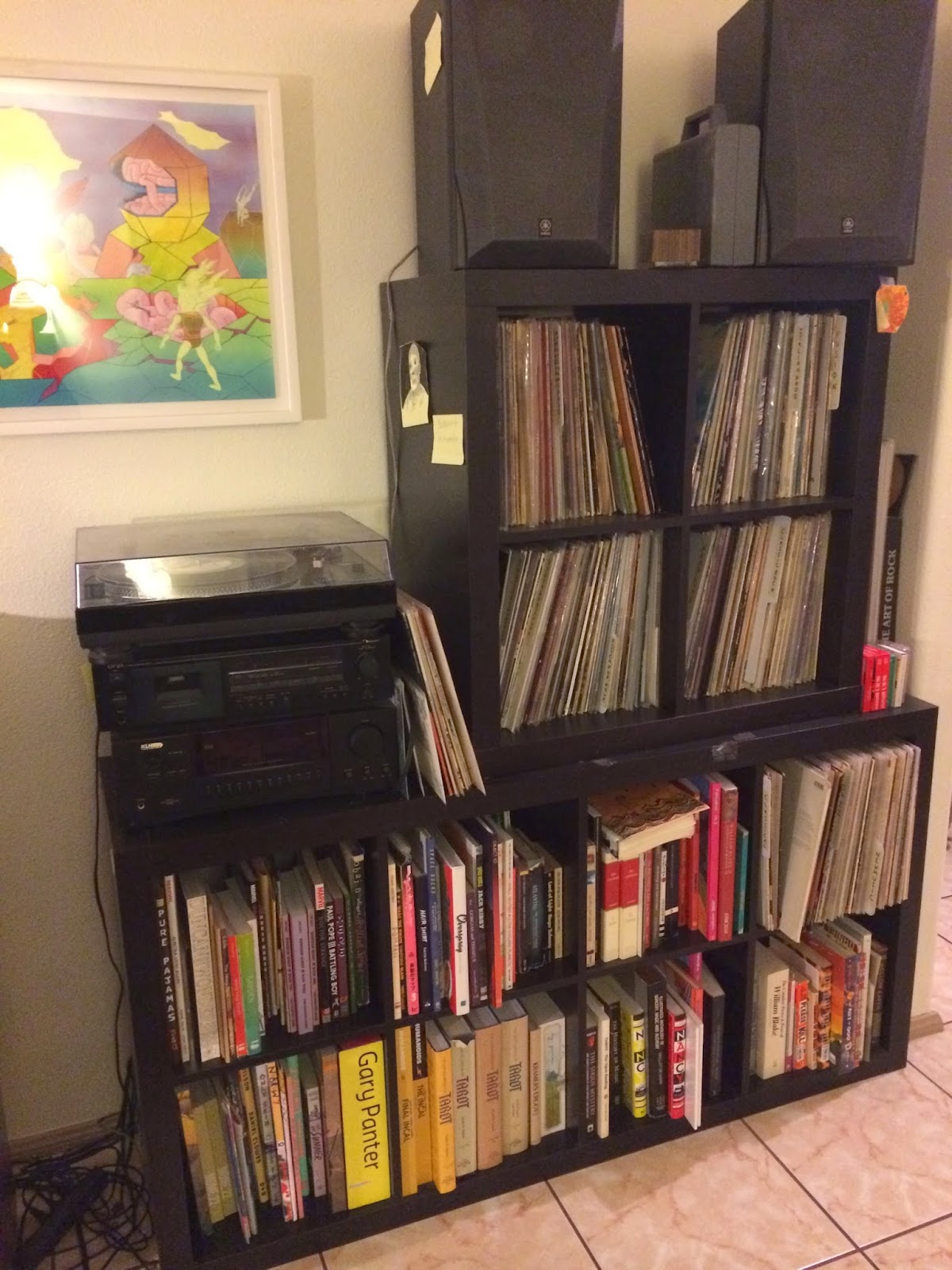 This is my stereo/records/books and comics shelf. I mostly collect prog rock records. I got rid of most of my other records when I moved to Los Angeles from Philadelphia. You can see that big ass Gary Panter book that PictureBox put out and maybe you can spot two volumes of Nancy in there. Also the wonderful Dungeon Quest and a bunch of Yuichi Yokoyama books. Also a bunch of books about Tarot cards. 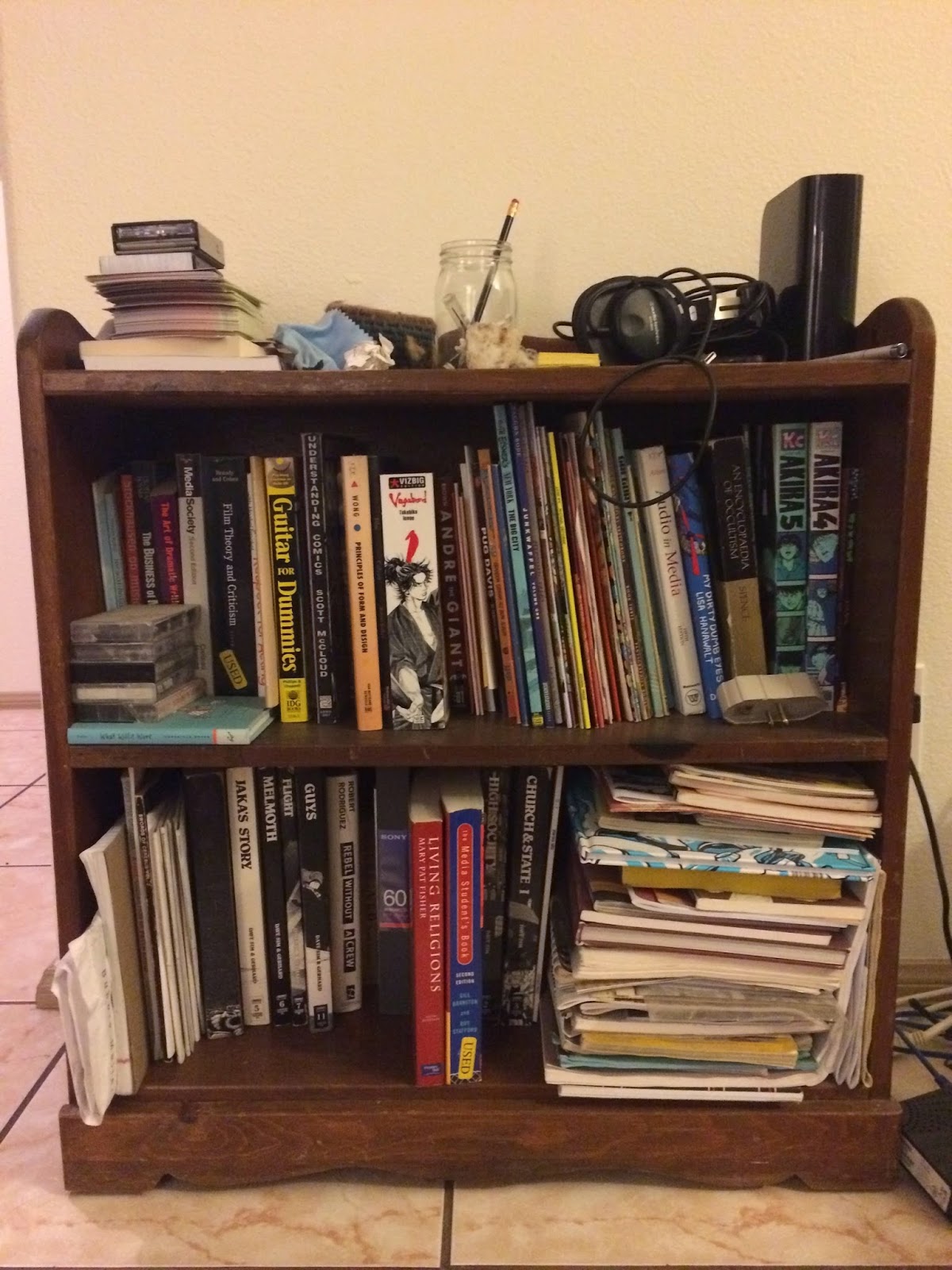 This bookshelf sits next to our couch with a bunch of older comics that I’ve carried around with me over the years. I used to have every volume of Akira, but now I just have 4 and 5? Also they’re in Japanese. I’ve never read it in English. Also I can’t read Japanese. A bunch of alt comics from the 90’s like Gregory by Marc Hempel. Is Marc Hempel still making comics? On top of the shelf you can see a bunch of garbage and a hard drive. Someone talked me into buying Vagabond volume 1, but I don’t really care to read it. I’m sure it’s entertaining. Check out that Guitar for Dummies! 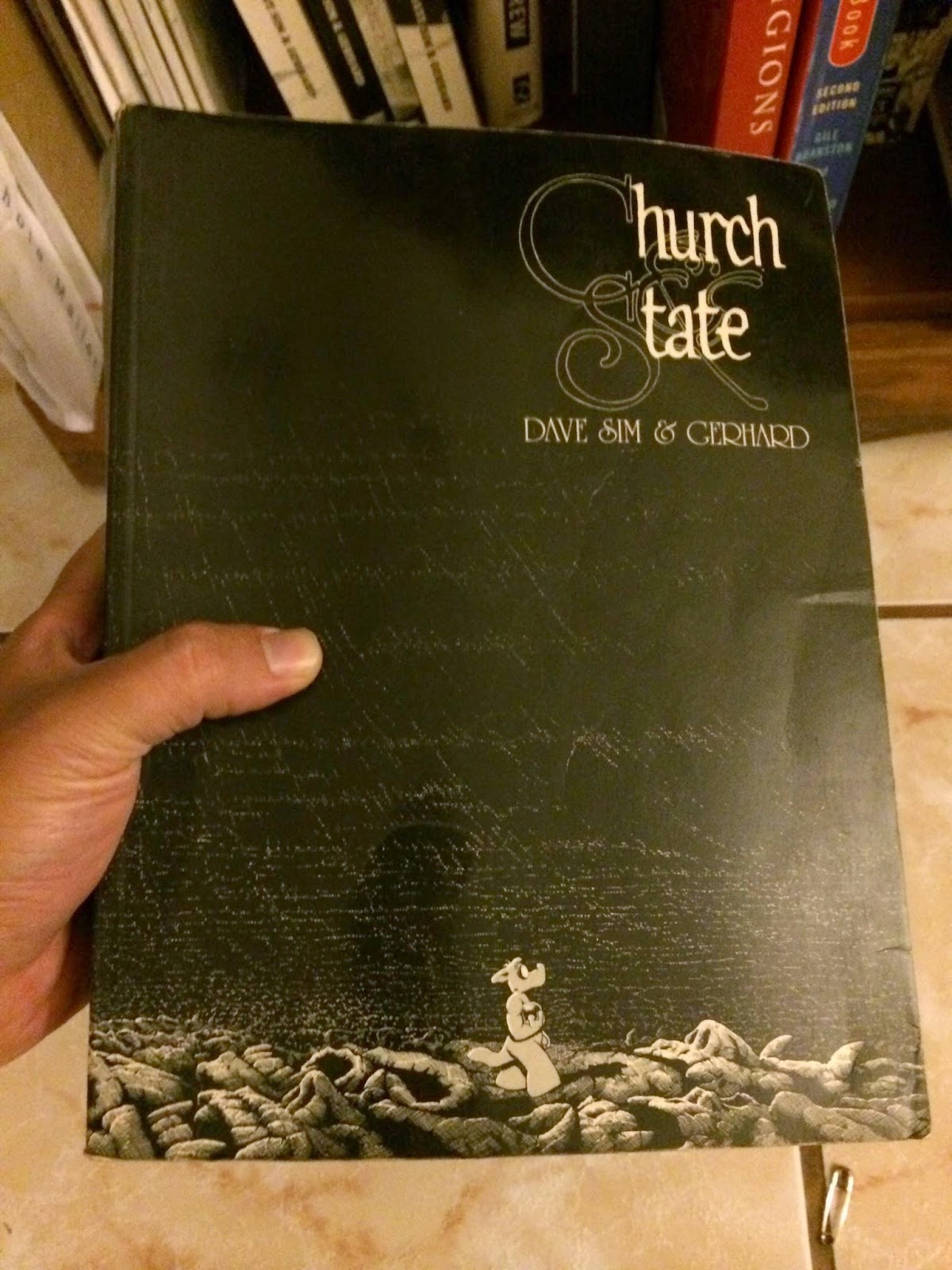 Sometimes I like to talk about how much of an inspiration Dave Sim was for me as a kid in high school; Church and State vol 1 and 2 for me, being the highlight of the series. I like to talk about it because Time and the way we as a culture build mythologies around people, have degraded the work. Sometimes I wonder how much we collectively desire to assassinate ourselves and each other. How much should we expose of ourselves in public? Probably not much! Anyway, check out my bookshelves y’all!

I never finished whatever volume it was that turned into blocks of tiny text. I also imagine that if I re-read the story, it wouldn’t hold up well, as it was so married to the time it was being written. The first 6 phonebook volumes or so stand in my teenage memory as some of the most formally ambitious and passionate examples of storytelling in the medium of comics. The thing I always say about Cerebus is, “It’s a work of genius, but I wouldn’t recommend it to anyone now.” I think you had to be there while it was happening. I could be wrong though. 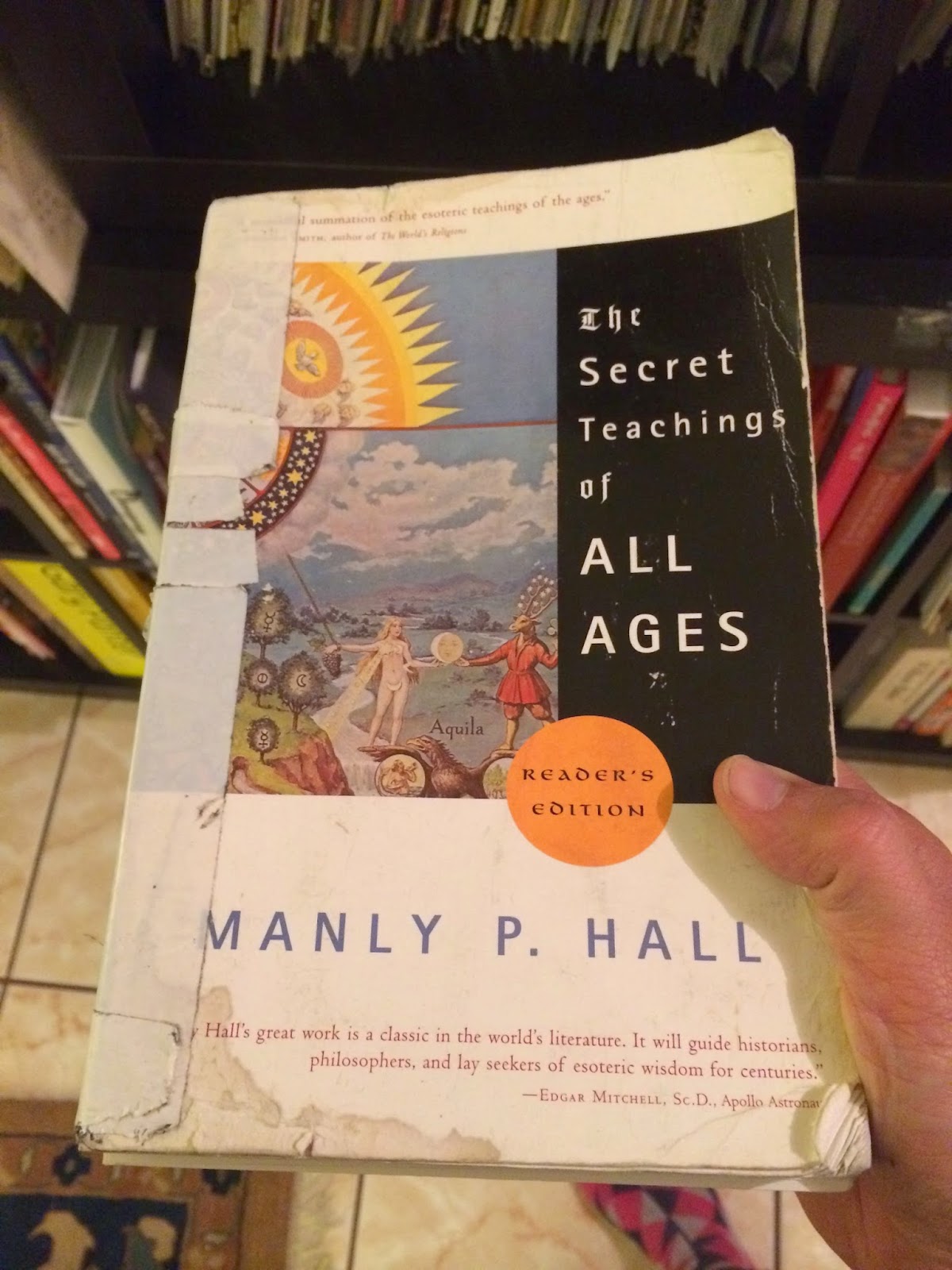 Also on this shelf is a book that influenced me more than any comic in the past 10 years. 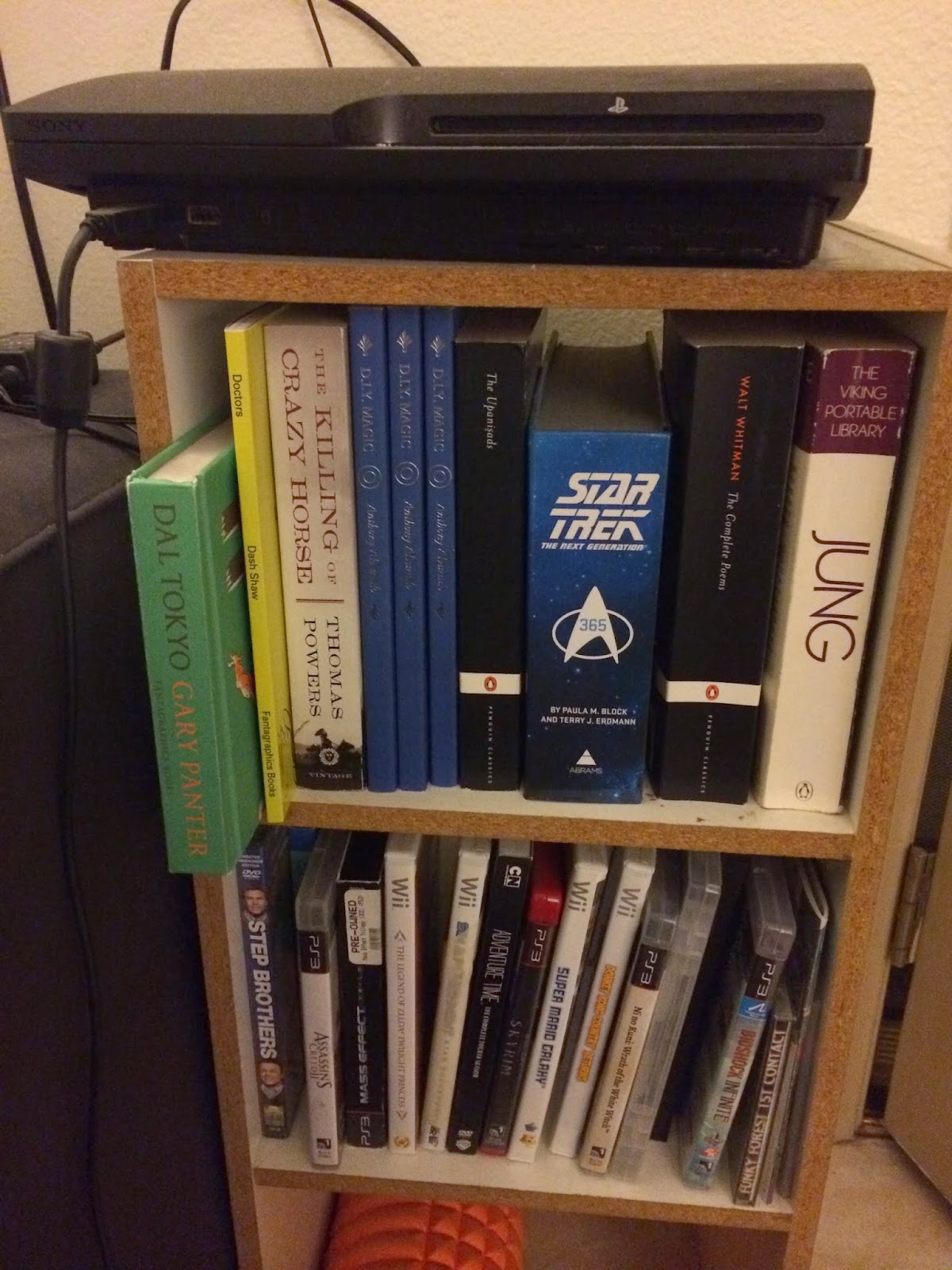 Here’s a small bookshelf under my Playstation. You can see the classic comedy “Step Brothers” on DVD there as well as some Wii and PS3 games. Also a Portable Jung that is probably in everyone’s house along with the autobiography of Malcolm X and Catcher in the Rye. That orange thing is a roller for my leg muscles when I go running. 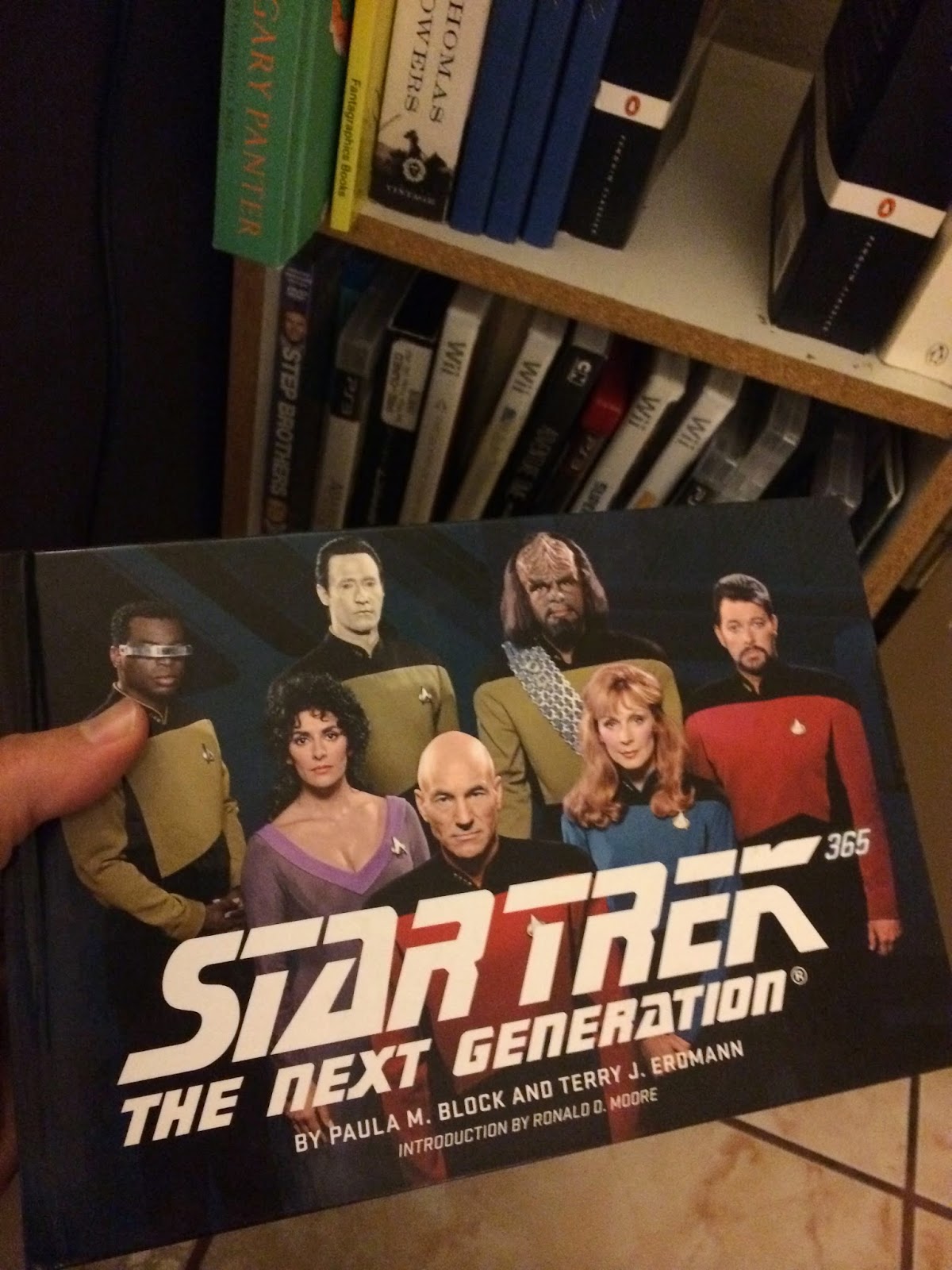 My brother recently watched all of TNG on netflix, so I bought him this companion book. It’s excellent. Interviews with the writers and actors about almost every episode. Am I supposed to only be addressing comics in this “shelfie”?  Do you like my tile floor? I try to cover it with rugs. 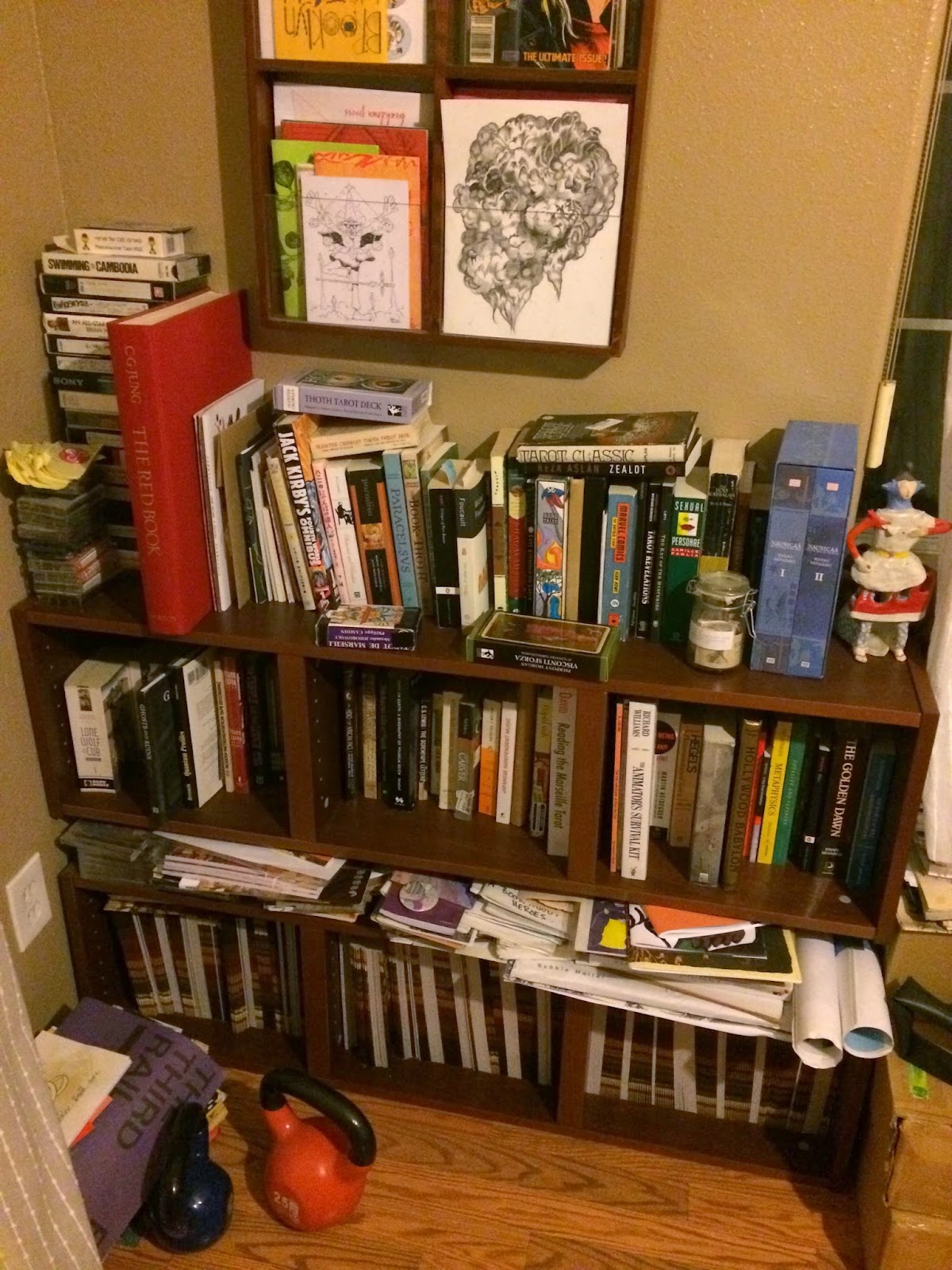 This is my bedroom bookshelf. The bottom shelf is dedicated to the first comic I ever self published, that I will never run out of. I don’t know what to do with these fucking comics. Nobody wants them. Check out my kettlebells. I haven’t used them in months. Today I tried to do some pull ups and I could only do one. That big red book is Carl Jung’s Red Book. It is way too heavy and big to read. I tried keeping it by my bed for a while, but it didn’t work out. 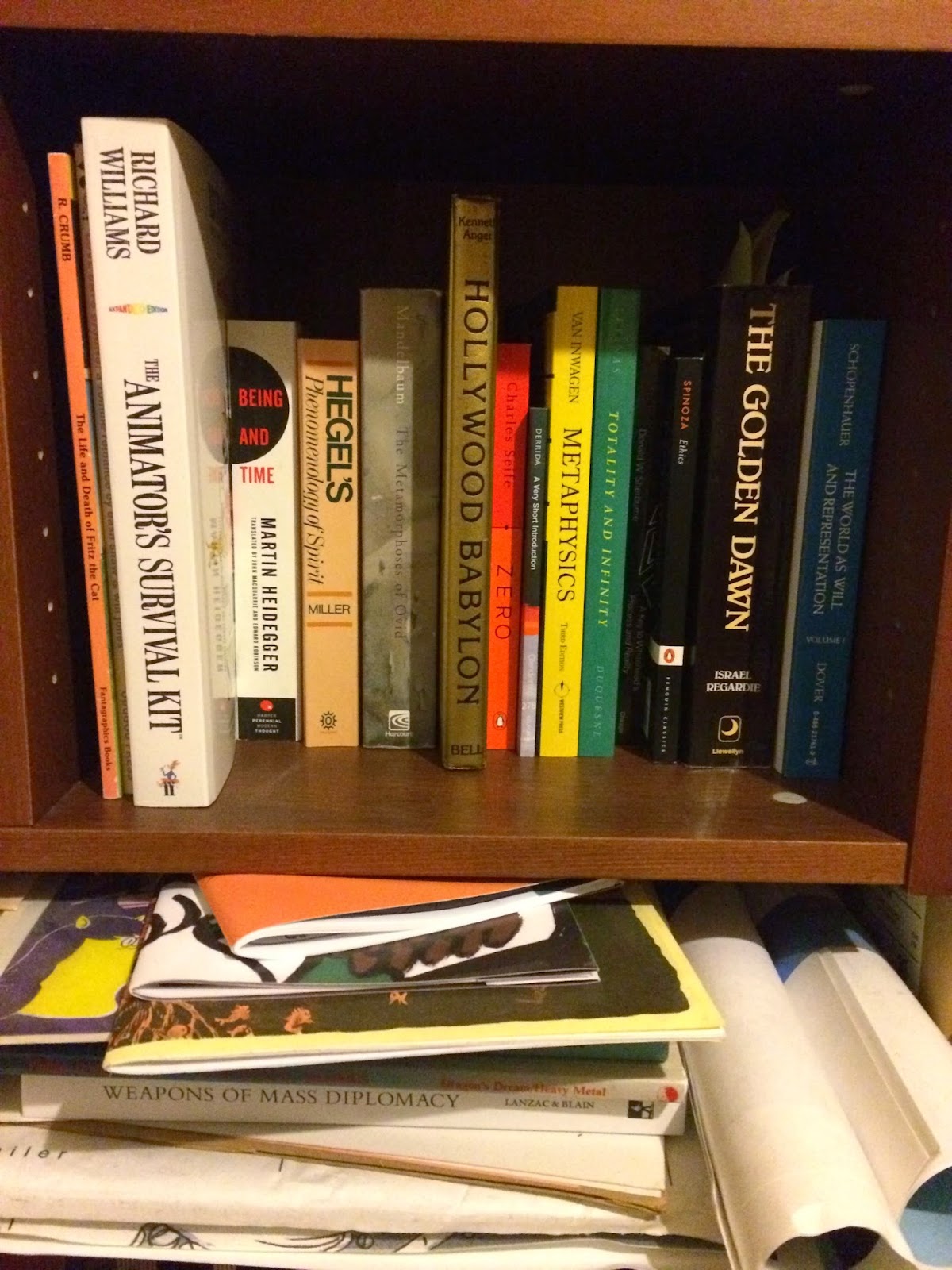 Here’s my area of mostly books I haven’t read and will probably never get around to reading. I bought Hollywood Babylon when I moved to Los Angeles, but I don’t know when I’ll get to it. Kenneth Anger rubs me the wrong way and I don’t know if I want his darkness seeping into my consciousness. 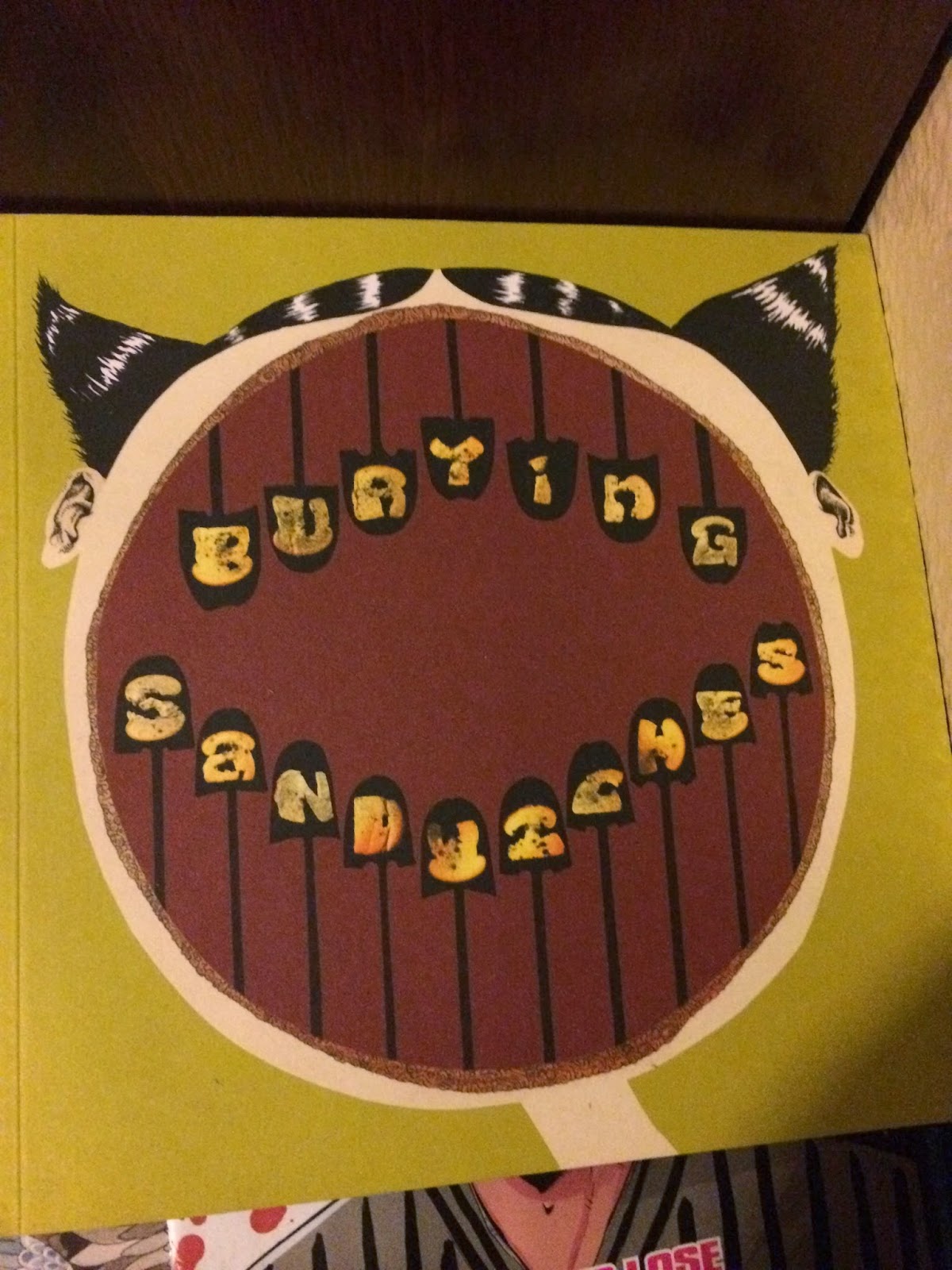 This is a book by Rob Sato. He only made one comic as far as I know. He got the Xeric grant the same year I did. We met at SPX while promoting our books. Now we’re next door neighbors, and his wife Ako was my work partner at Adventure Time for the past 3 years until she quit. Small world! Anyway, Rob is a full-time painter these days, and you should be following his work. He’s on Instagram. Ako Castuera is also a full time sculptor and you should check out her work too. She is also on Instagram. I am too, dudes. Someday Instagram will no longer exist and our hard drives will be obsolete, and the Cloud will crash. 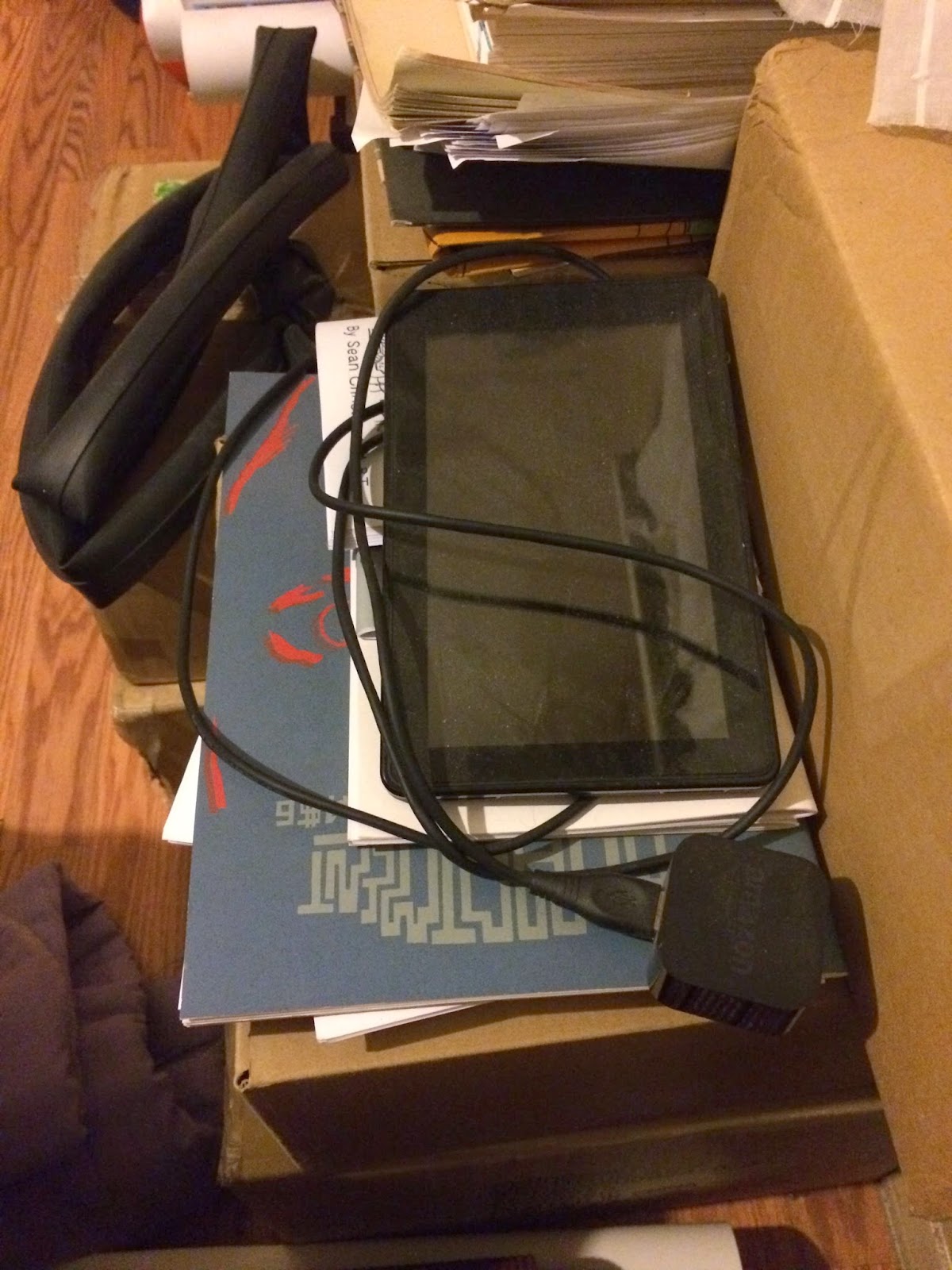 I thought this Kindle was going to make my life more convenient or something. Now it just collects dust in my room. I tried reading Snow Crash on it, but the battery died and I never recharged it. 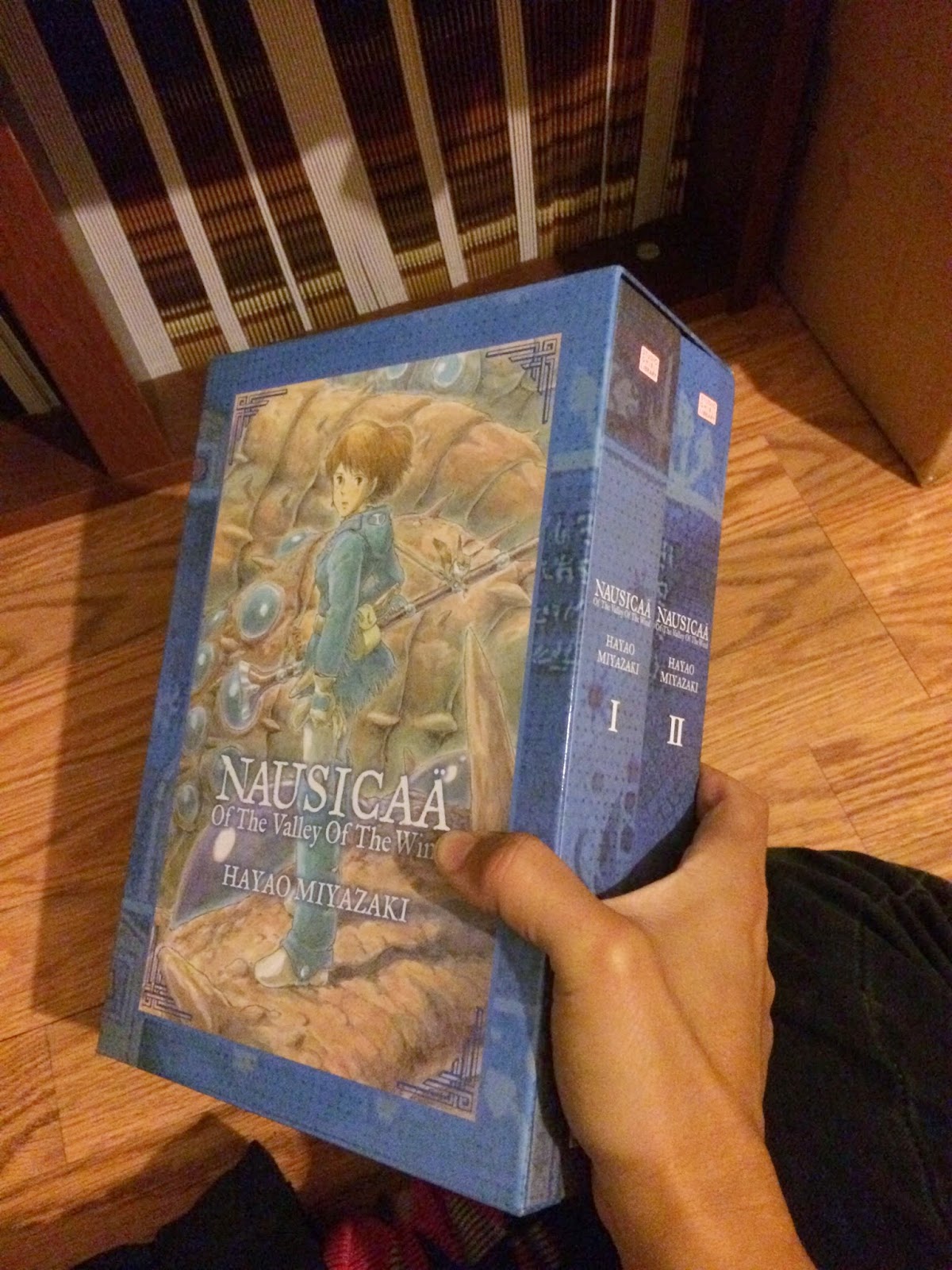 Here’s the best comic I read this year and last year. Deep, beautiful, mostly coherent, and compassionate toward good and evil. I think Sam Alden pointed out to me that it’s a little hard to hold and read. I agree. I kept having wrist pain while reading this in my bed. Ha, oh well. The movie is one of my favorites of all time, but the manga is truly WAY better. 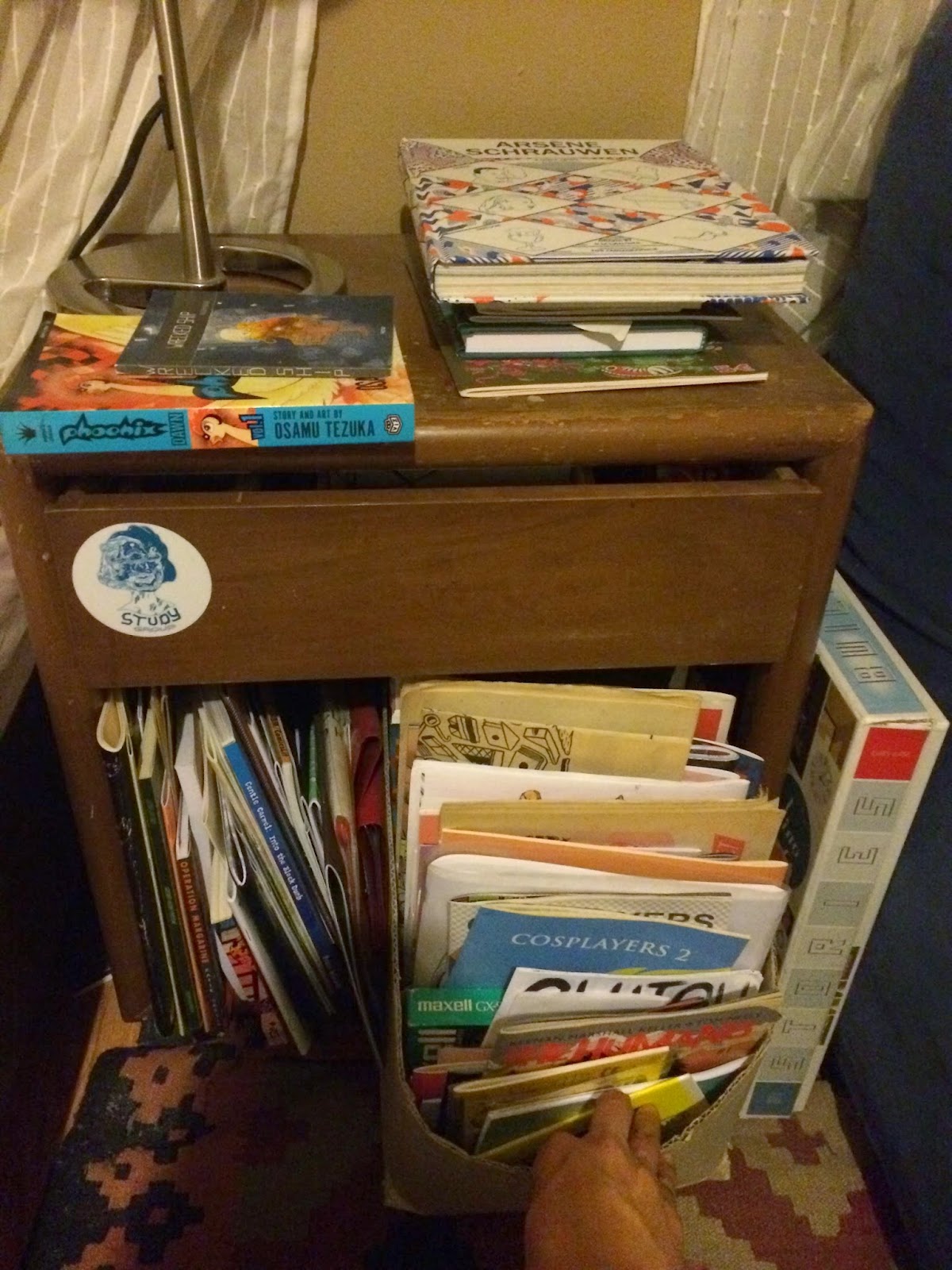 Here’s where I keep a bunch of floppies. I don’t know how to store floppies. Cosplayers by Dash Shaw is really excellent. I hope he keeps making more. Look at that Building Stories to the right. A friend gave me that as a gift and I haven’t read it. I will probably never read it. I opened it once, felt oppressed/overwhelmed and closed it right away. As a side note, I also felt impressed by the effort put into it.

Up top is volume 1 of Tezuka’s Phoenix series. I just read it and it’s my first time with Tezuka. I enjoyed it on a certain level. I also was really thrown off by the radical tonal shifts and pop culture references. I’m going to read the other volumes to see how it develops. 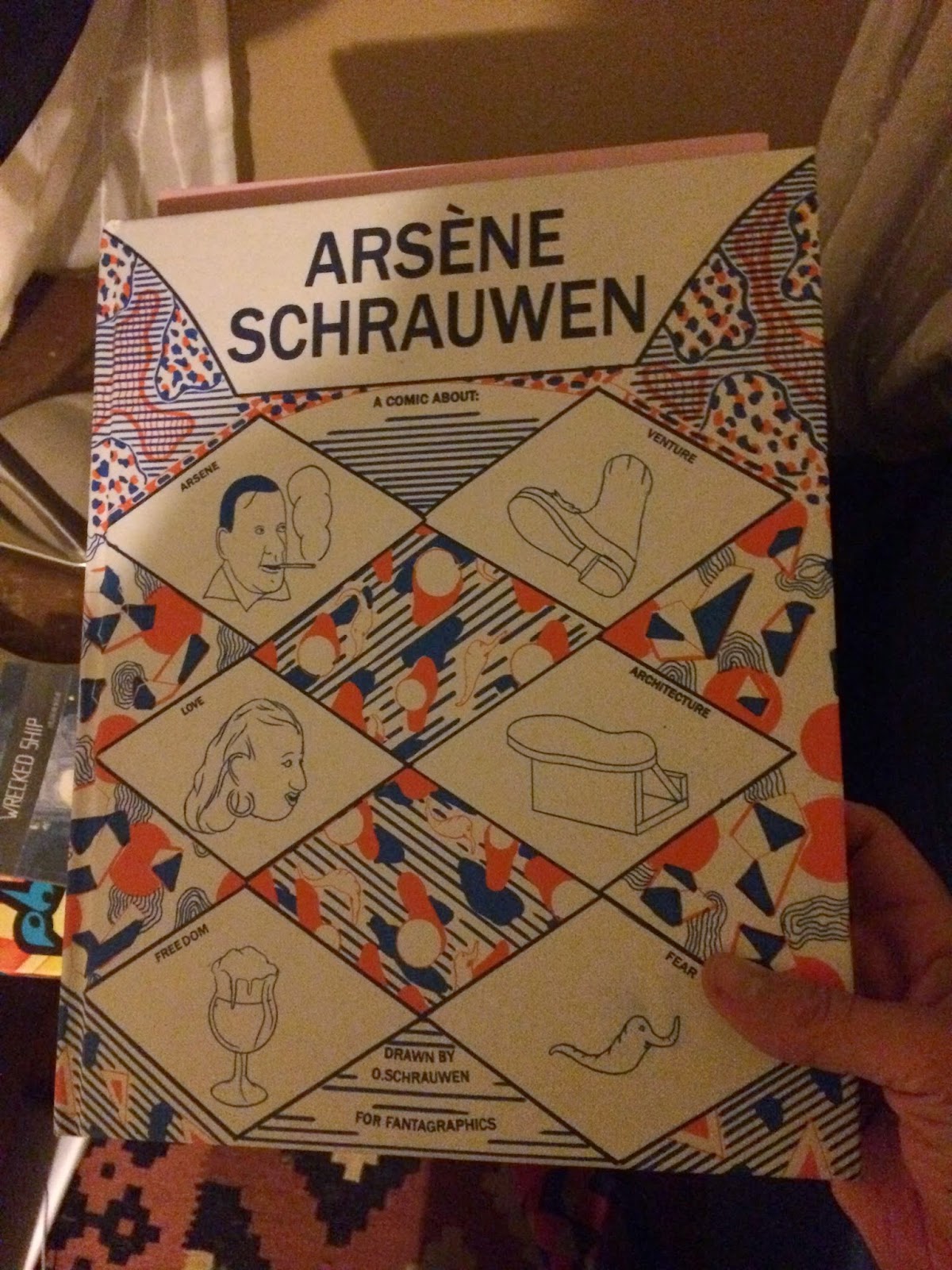 I’ve been slowly reading Arsene Schrawen for months. I pick it up and read a few pages every couple weeks. I think the writing is pretty brilliant and hilarious. I like the drawings and compositions. I don’t like when a comic uses voice over narration exclusively to tell a story. It’s a deep roadblock for me. In the same way, I have a hard time with voice over narration in film. I feel like it’s a bad storytelling tool for a visual medium and wish people would avoid it. This book is still great in other ways, but I’m reading it at a snail’s pace for that reason. 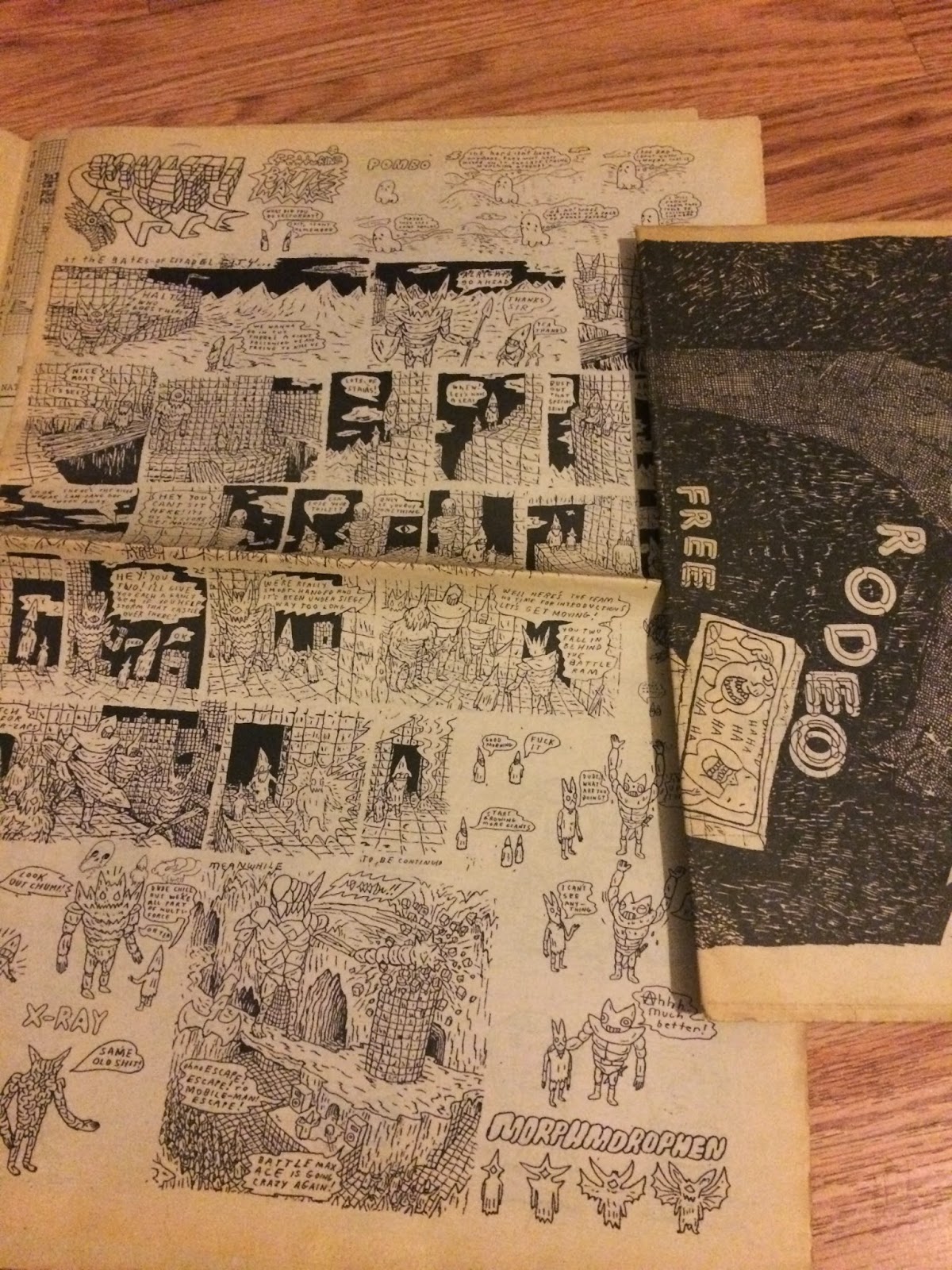 Here’s some “old” Paper Rodeo’s featuring the sick Multiforce strip by Matt Brinkman. My friend Ian used to go up to Fort Thunder sometimes and bring us back these comics. Those were more mysterious days. I really admire Matt Brinkman’s blocky castle/dungeon architecture and his enthusiasm for exploration. 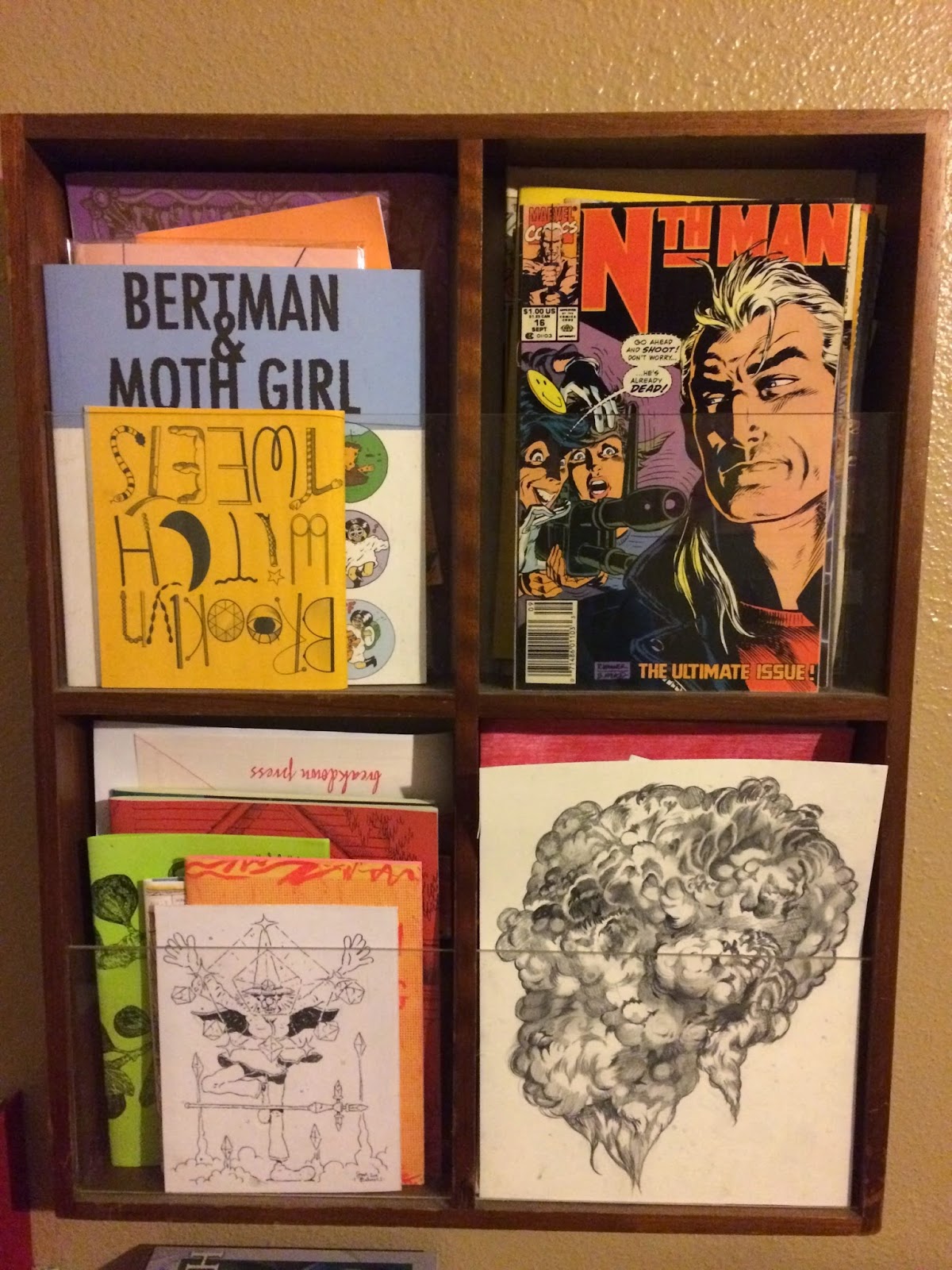 My neighbors Rob and Ako gave me this as a way to store zines and floppy comics. Is that what they’re called? “Floppy comics”? I’ve been borrowing the full run of “Nth Man the Ultimate Ninja” from Andy Ristaino for over 2 years. Nth Man is really bizarre and hard to explain to people. It’s pretty special. I should probably tell Andy I still have it. That drawing of exploding smoke was given to me in a secret meeting by a girl with a live-in boyfriend. I like to look at it sometimes and wonder about this crazy world! The wizard drawing is by the amazing Jesse Balmer. Bertman & Mothgirl is by Nick Thorburn who I draw with at cafe’s sometimes. 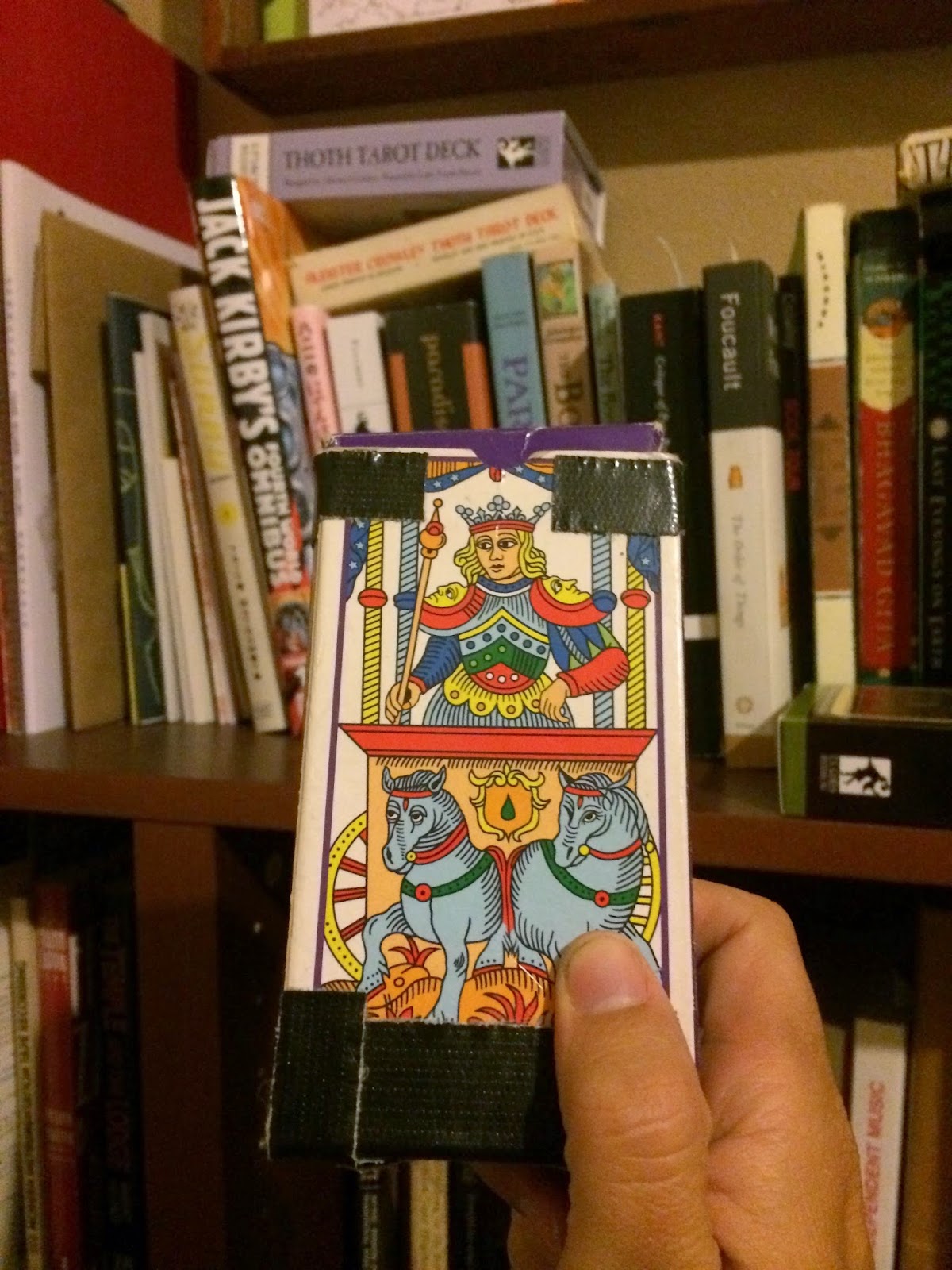 Dash Shaw got me into Tarot cards a while ago. I’ve been studying the Marseille deck pretty heavily for the past 3 years. My memory is that he described the Tarot as a living comic book. I don’t know if he actually said that, but that’s how I think of it now. Anyway he did say that it could be useful for comic artists to have some kind of familiarity with Tarot cards and I agree. I have some plans for the future regarding the Tarot, but I can’t really think about it till I’m done my current projects. 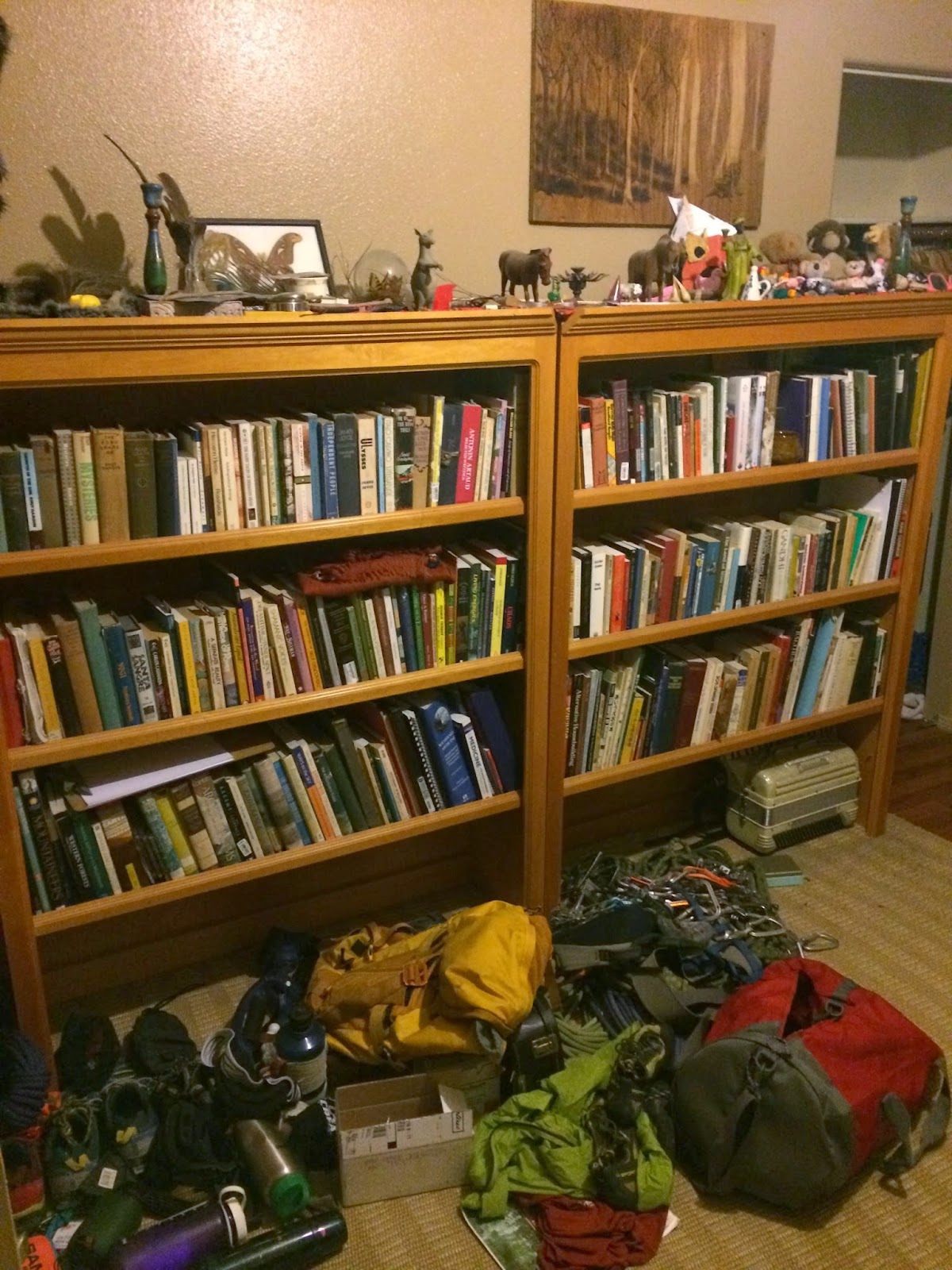 This is my brother’s bookshelf in his bedroom. He’s a mountain guide and a rock climber. That’s why there is climbing shit all over the floor. On top of the shelf is a bunch of trinkets and symbolic items, but you’d have to ask him about it. He also wrote an amazing novella last year that is unpublished, because the book world is way fucked up and hard to break into, unless you’re writing cookbooks. He’s really into Knut Hamsun and Hermann Hesse. I think his favorite book is Mount Analogue by René Daumal.  I just borrowed his copy of Siddhartha and read it through for the first time. I thought it was amazing.'

A massive thank you to Jesse for his time and participation, and to Ryan Cecil-Smith for putting me in touch. You can view all the previous installments of Comics Shelfie here. Next installment will be up in a month.
Posted by Zainab at 10:58