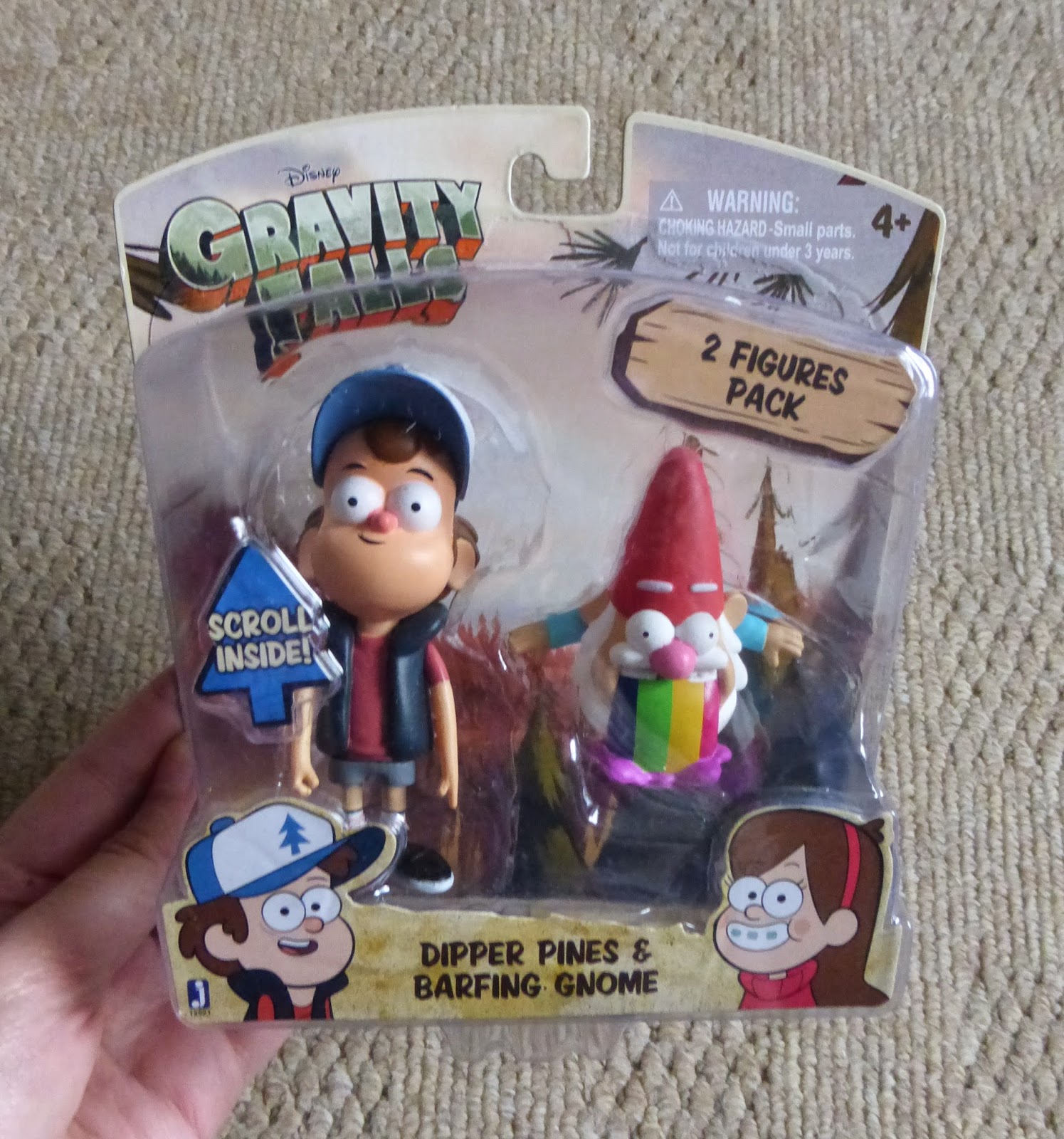 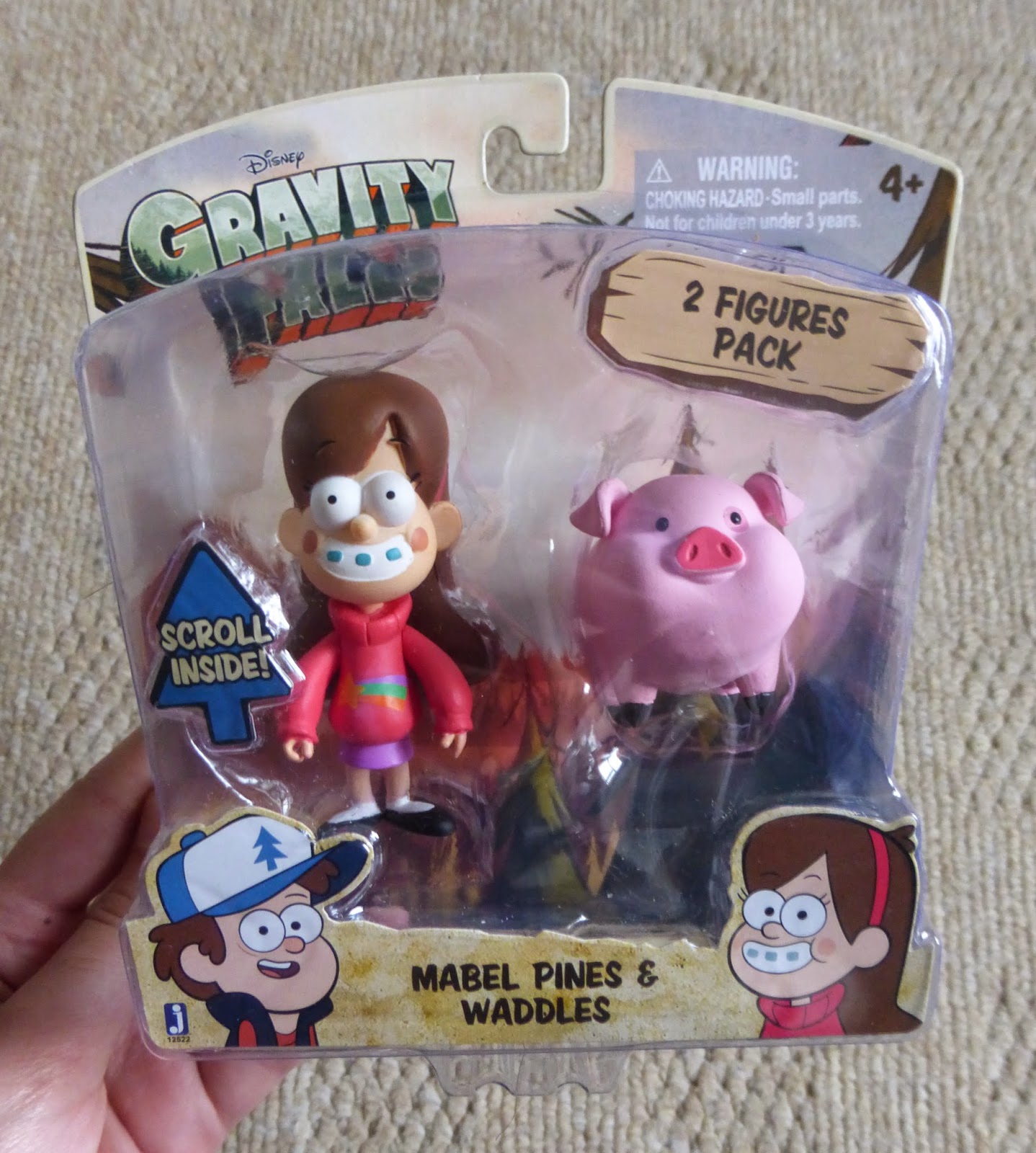 It's been a while since a toy review- the last (and also first) one was in January- I don't buy toys often as you can tell. Partly my toy attention has been focused elsewhere; I've been collecting the 90's Kenner Batman Animated Series figures and scouring Ebay to find them at reasonable prices, but though I'd write about them once I've accumulated the ones I want (Bane and Penguin left to get). What I did buy back in February were some new Gravity Falls toys. I like Gravity Falls a lot. A lot LOT. I didn't really start watching serialised cartoons and animation again until last year and the two shows that got me back to appreciating the art were the new Teenage Mutant Ninja Turtle series (one of the problems I had with TMNT comics was the 'space alien' element was overkill for me; you had these mutate ninja turtles fighting the Shredder and the Foot Clan, and the Krang and their inter-galactic adventures on top of that just took me out of it. That aspect of it translates better in the cartoon, I think) and Alex Hirsch's Gravity Falls -from Disney of all people.

Gravity Falls brings together a lot of elements that appeal to me: the mystery of the week, the spooky going ons, the general X-Files vibe (in the theme tune- it's not just me right?), combined with the familial core of the story- Mabel and Dipper's relationship with one another and their Grunkle (great uncle) Stan (as someone who comes from a big, close family it's very recognisable). On top of that you have the larger, long-running narrative of play -what makes Gravity Falls such a hub of weird? Who wrote those diaries?- with some truly unforgettable characters -how good a villain is Li'l Gideon?- and standout, fun episodes: Fight Fighters, Boyz Crazy, and more. It treats all its characters with care and respect, too- they may be funny or flawed or contemptible, but they're all so well realised that it's easy to empathise with each on some level. Ostensibly, the show is about growing up- Mabel and Dipper are on the cusp of teenager-hood, on their summer holidays -perhaps the last they may want to spend together, or at their great uncle's house/cabin-, and this last special time where they still believe in monsters and magic and wonder, or before their bond loosens, is captured here. Also it has Neil deGrasse Tyson as a super intelligent talking pig. 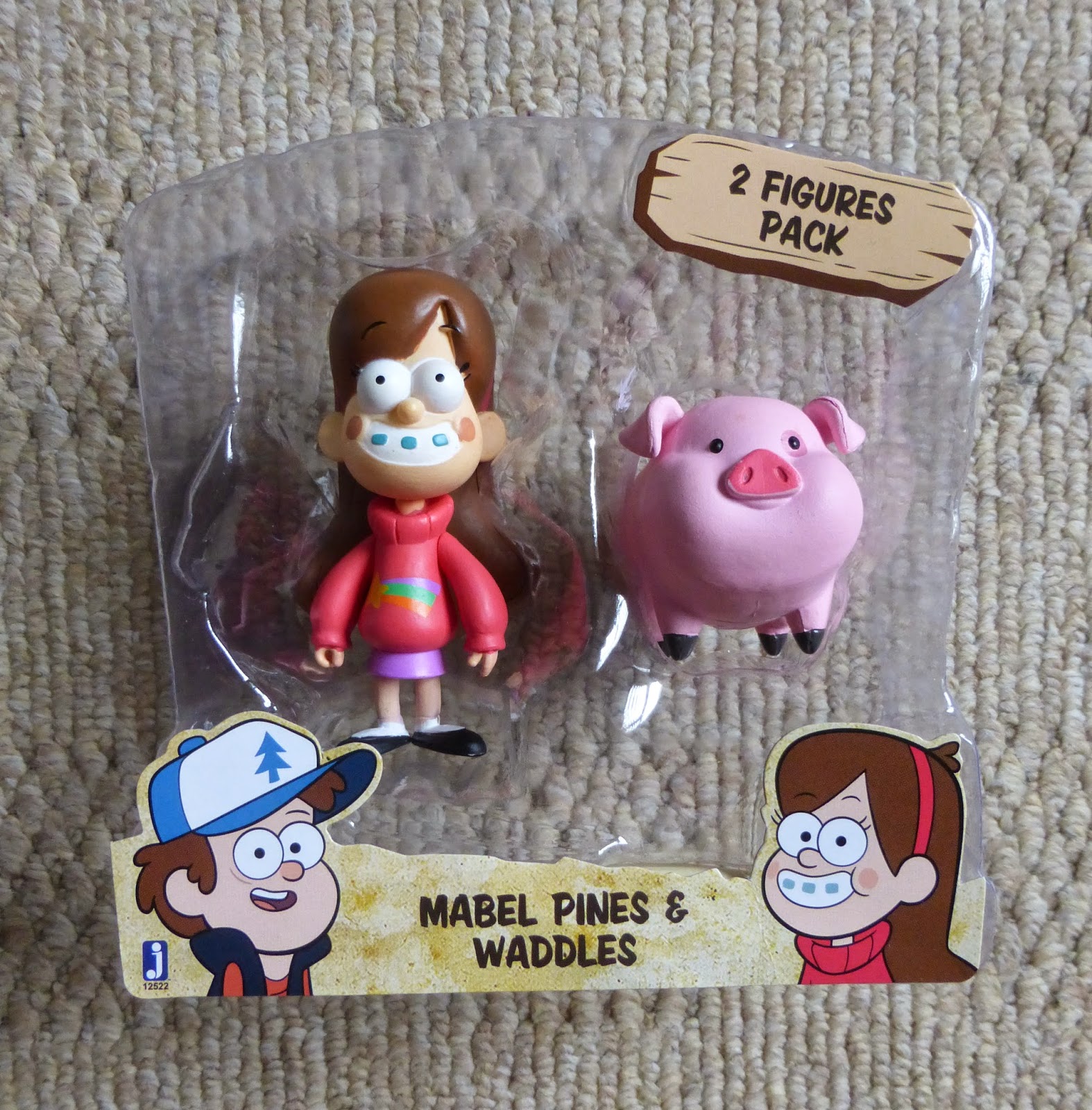 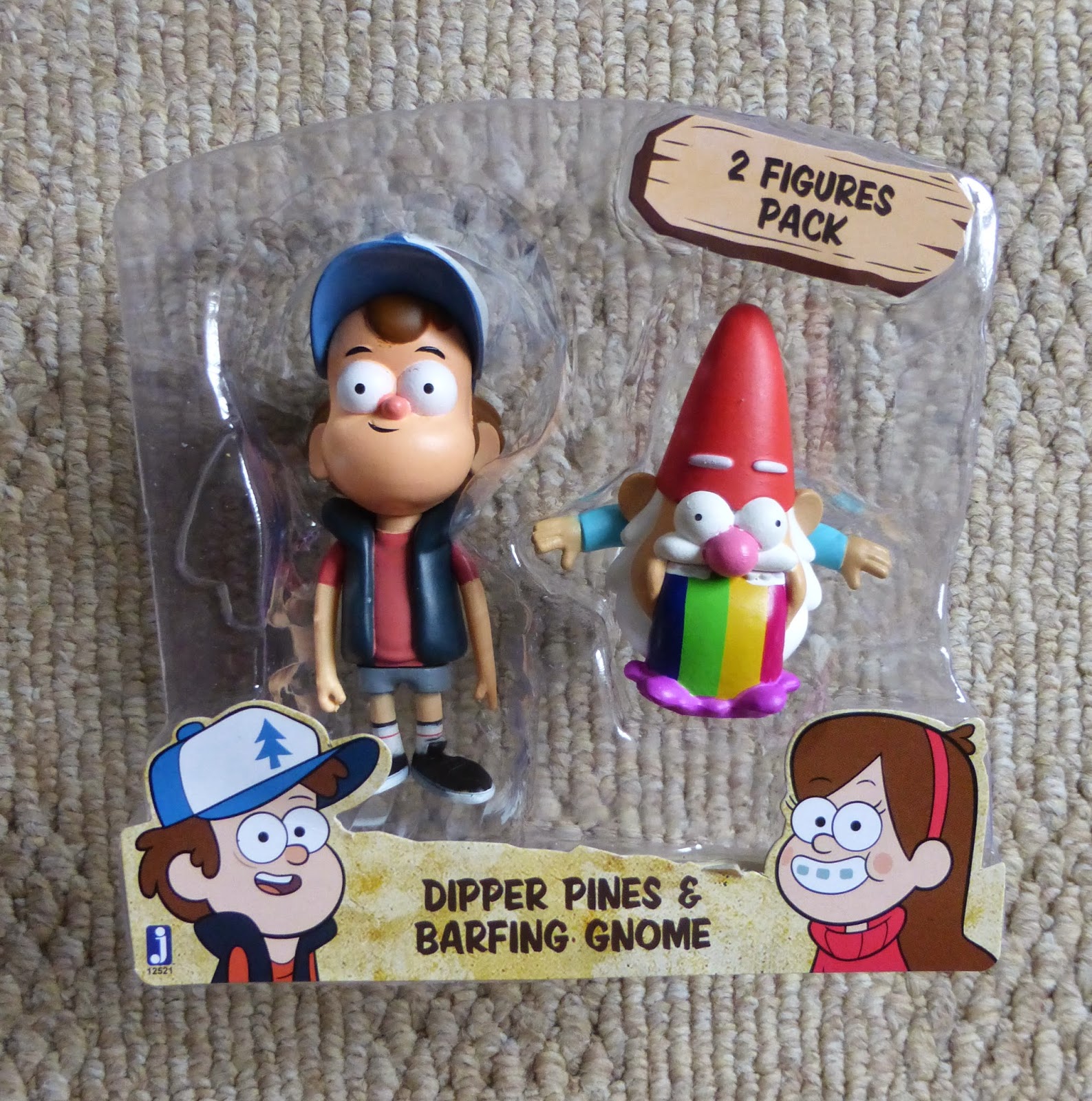 So when Clark pointed me towards the figures on Toy Wiz, of whose existence I was not aware, I had to get some immediately. Warning for sensible people: don't be like me and devoid of any chill or patience whatsoever, and do wait until things such as these are widely available (or at least available in your country) so you don't have to pay your weight in gold for shipping from the US and then custom charges on top. Back to the point at hand, there was a choice between a 6-figure pack which comprises of Dipper, Mabel, Grunkle Stan, Wendy, Soos and Li'l Gideon, or 2-figure packs: Mabel/Waddles, Dipper/rainbow-puking gnome, and Grunkle Stan/Bill. I opted for the Mabel and Dipper 2-packs because like any normal person, I love Waddles, and the rainbow-puking gnome has become an iconic touchstone image of the series. And it came with Dipper, haha! Kidding. Maybe... 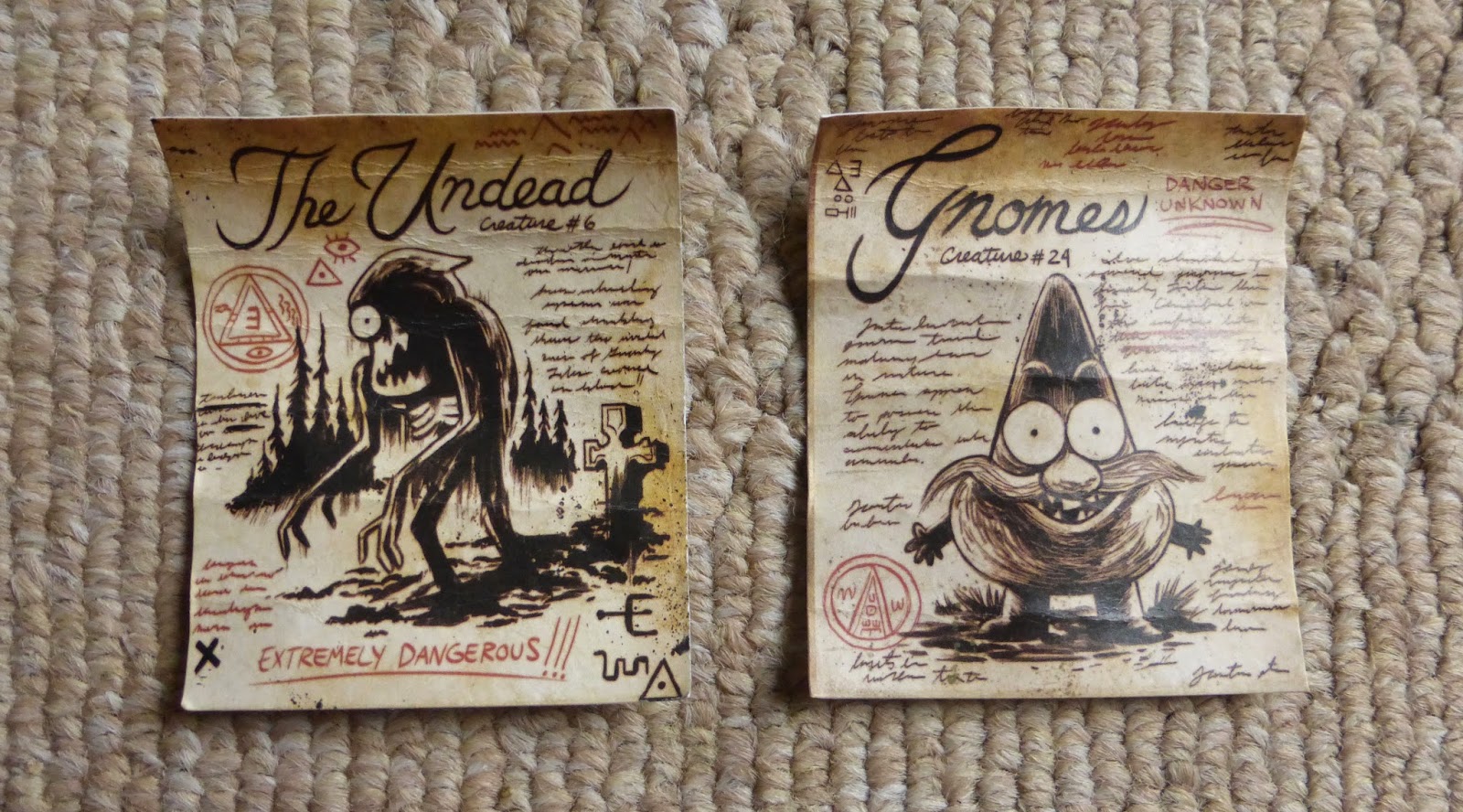 Each two pack comes with a little 'scroll' which is supposed to be a page from the secret mystery diaries, with information on specific monsters, which is a nice touch.. I got 'The Undead' and 'Gnomes' fittingly enough- the smaller writing is unreadable and intended to be such, but the illustrations are cute and the aged effect is cool. The twins are 3 inches tall (the 6-pack figures are slightly smaller at 2 inches). Produced by Jazwares, they're articulated at the shoulder joints, waist and neck, but none of these joints are very flexible, so it's more a twist or move for the sake of it. The sculpting on Mabel is good; the detail is impressive- her headband is moulded into her head instead of being painted on and the happily smiling expression looks very much like her. She's wearing one of her coveted jumpers: the pink shooting star polo-necked one, and the sleeves are nicely done, baggy with cuffs falling over her hands. I like the way her hairs is shaped into these bubbled, bouncy ends. Dipper doesn't fare quite as well. He's recognisable from his signature hat and clothes, but his eyes look a tad too buggy as opposed to wide-eyed, and the lower half of his face and half-smile looks a bit odd. I can understand its hard to replicate to plastic expressions that are much livelier in motion, though I think this weird effect is due to the decision to give him such a tiny mouth/smile rather high up in that bulbous expanse of chin/lower face- it doesn't translate well either way. 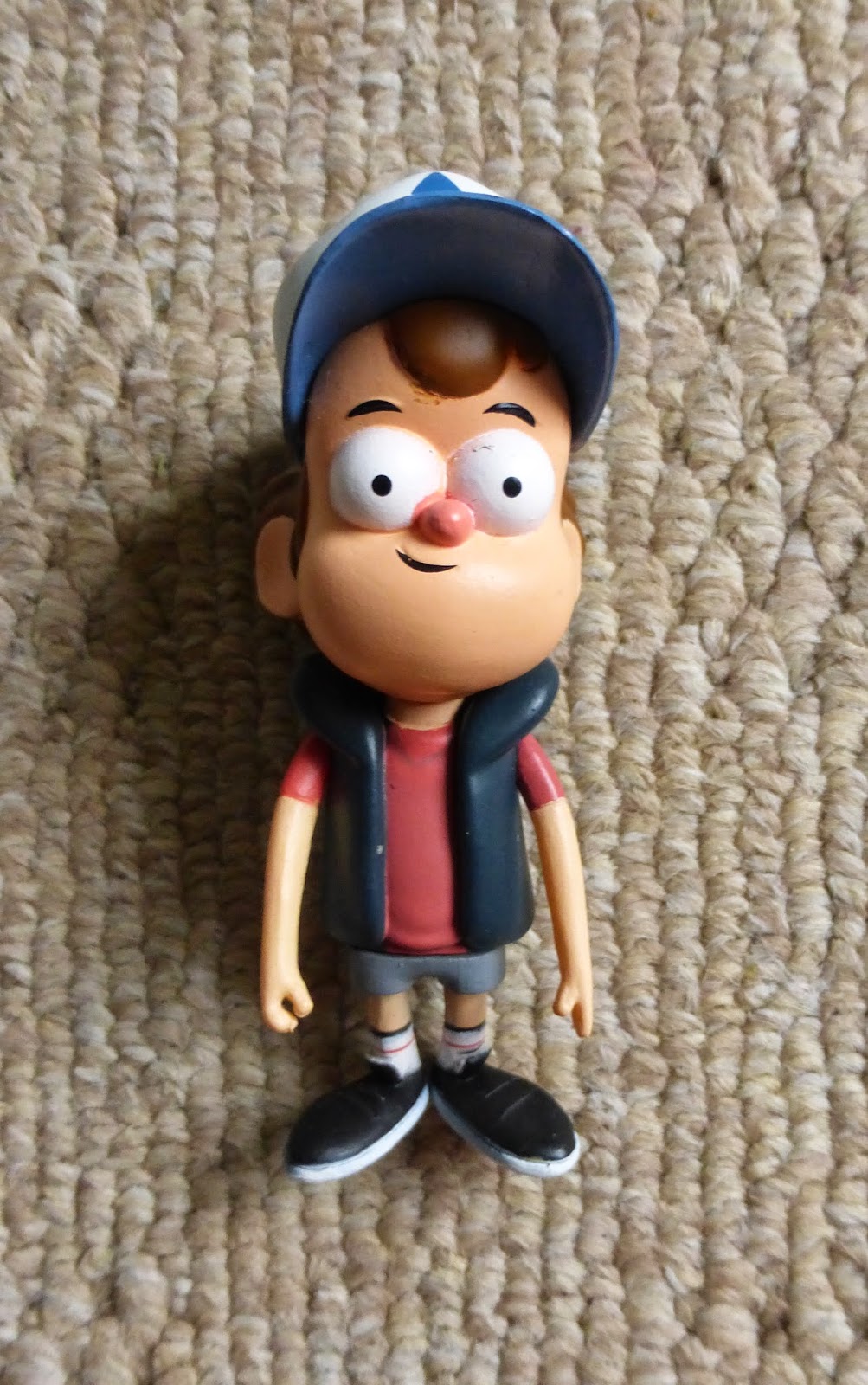 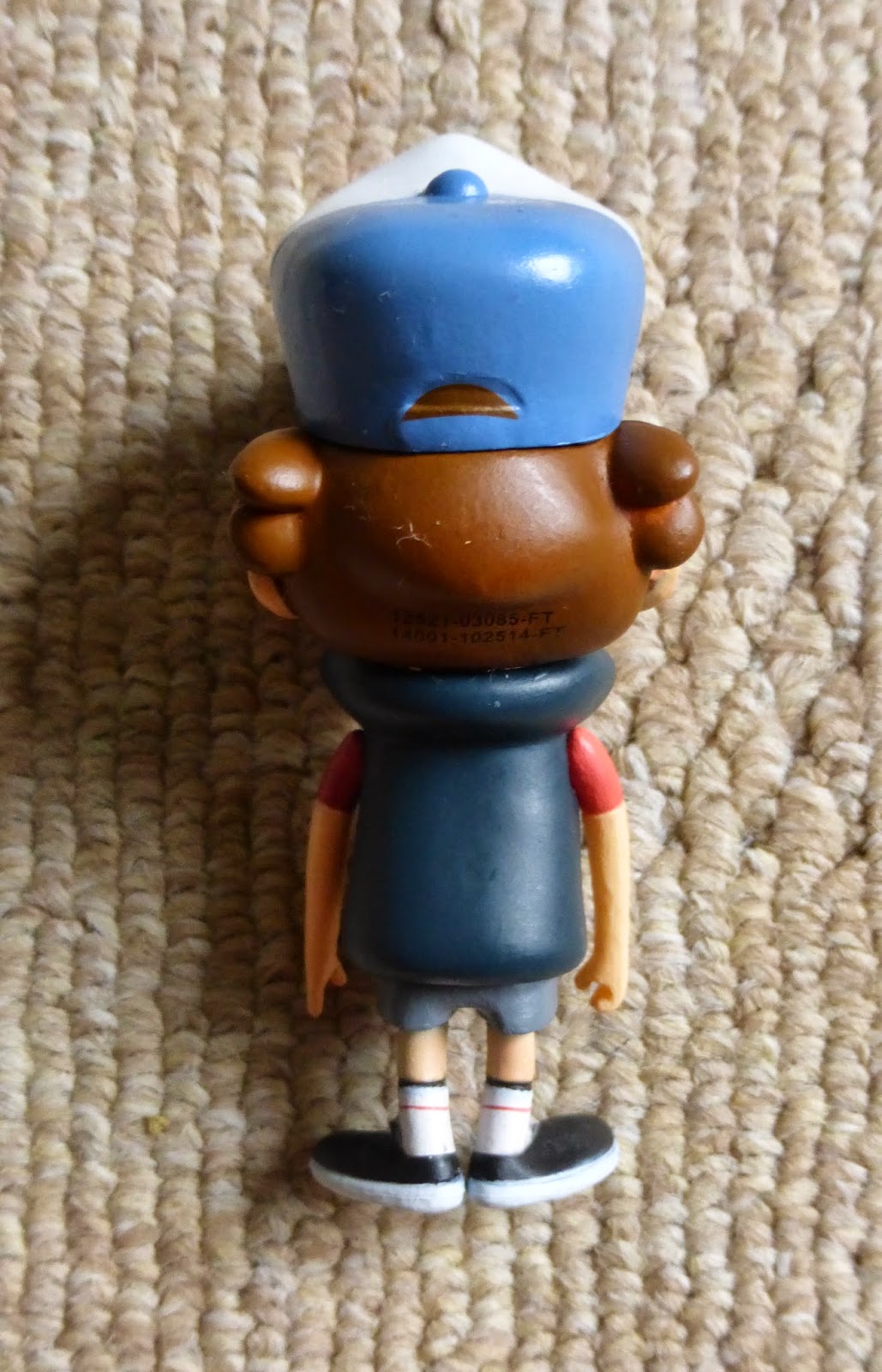 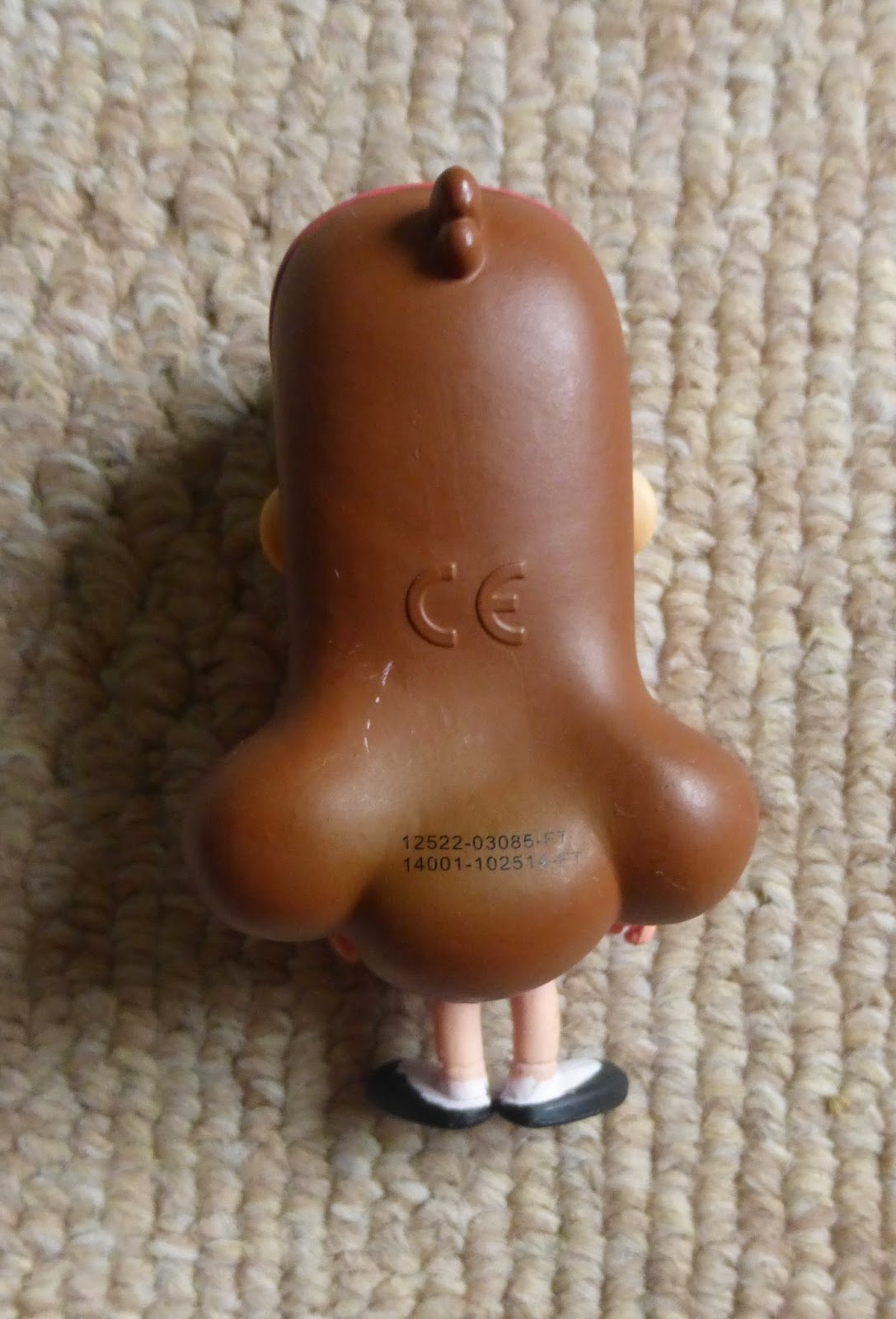 But there's one, big main problem with the figures: they don't stand. Waddles and the gnome with their sturdy, even weight distribution and low center of gravity are fine. However, the twins have been designed to emulate their cartoon-personas with large, over-sized heads and smaller bodies, and as such are too top heavy to be able to stand independently. The proportions mean that less than a third of the figure's height is devoted to the legs, which are super thin (again true to the design, but poorly weighted), and coupled with the big heads and sizable torsos, the balance is thrown way off, and the legs are left unable to carry all that weight. You can lean them against something, but if you're after these toys for display purposes like me, you may want to reconsider. I'm not sure how they'd fare if you got some small stands and tried to have them supported upright in that manner. I may try Blu-tack as an option and see how that goes.


Waddles and the gnome are great. The gnome in particular, looking at him face-on makes me smile; it's very funny how he's got his arms stuck stiffly out so that they look they're protruding from his ears, and his shocked eyebrows have risen onto his pointed red hat. but it makes for an arresting image probably because there are so many colours in play and the juxtaposition of friendly, dungaree-clad, fluffy bearded tiny creatures with psychedelic vomit tickles the traditional associations. Waddles is Waddles- cute as a button, and he knows it, but you let him get away with it. They're both nice, solid figures. Writing about these makes me wish the show would update regularly once more, but it's good enough that I seek it out whenever there's a new episode. 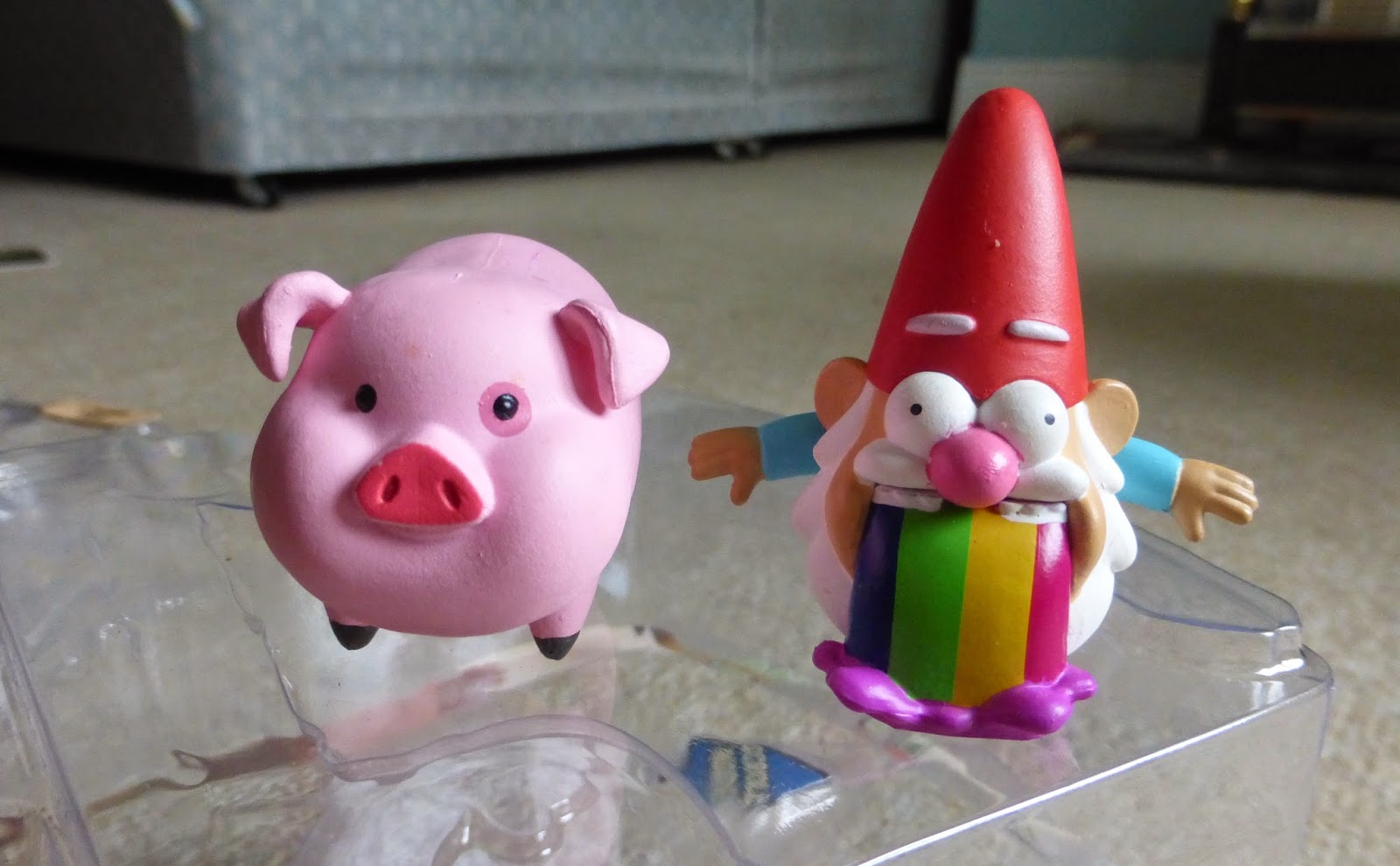 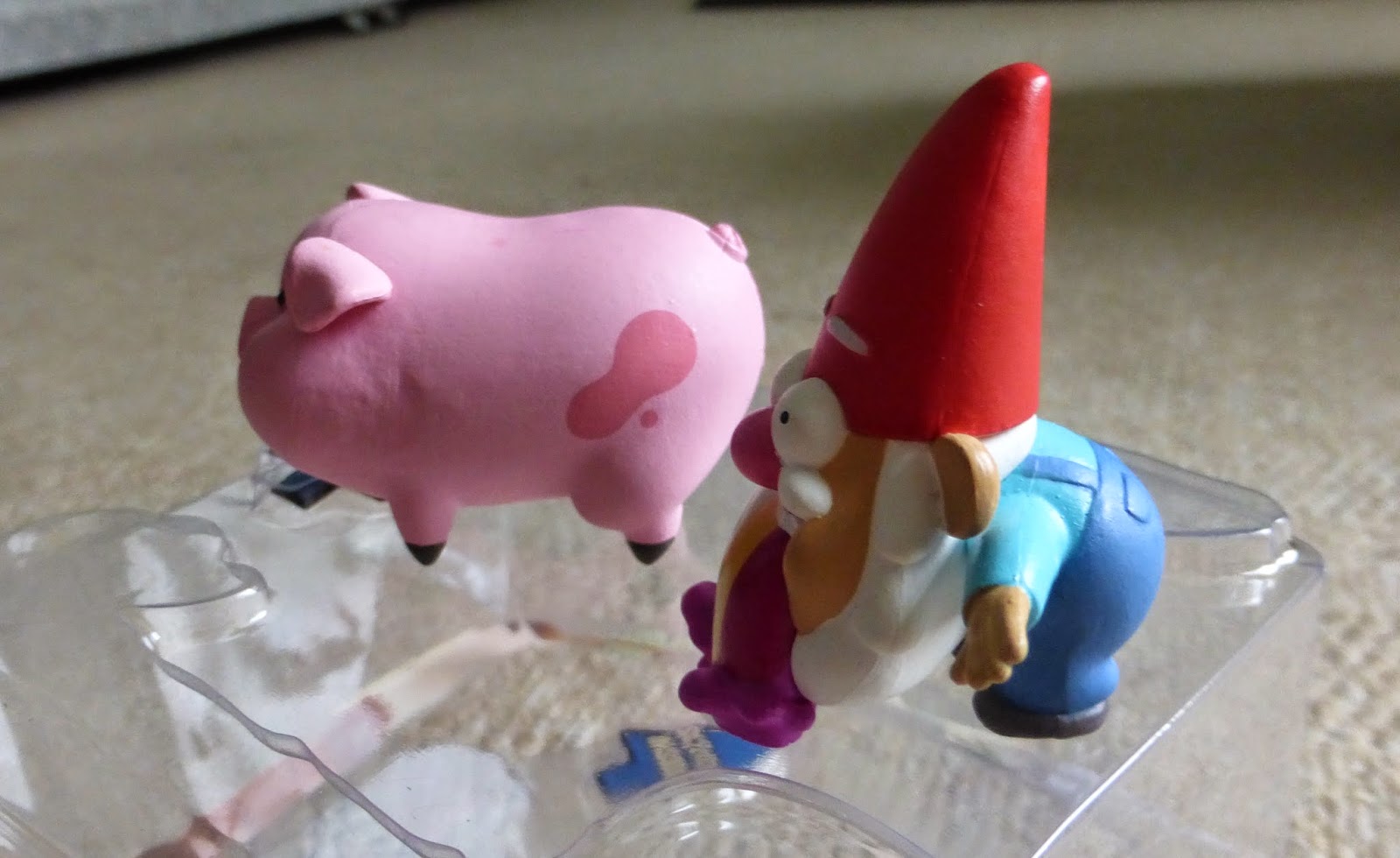