Tony Sandoval's Doomboy: a sweet tale of grief -and metal 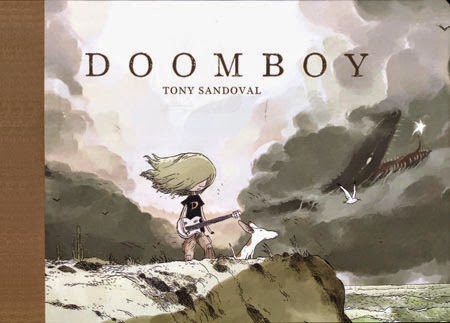 
The first of Magnetic Press' releases last year, Tony Sandoval's odd, beautiful Doomboy is a book of paradoxes in that its weaknesses function as strengths and vice versa. Understated and meandering, yet ostensibly specific in focus, this is the story  of Id, a teenager caught up in the strange vacuum of grief after the death of his girlfriend, Annie. Sandoval opens with Id and his friends gathering together to visit a local night spot- a gig is taking place. It's a scene unremarkable, but familiar and warm in its depiction of easy acquaintance, joshing and dialogue. Id heads home afterwards and finds his mother sat waiting for him in an armchair, hands folded in her lap.The juxtaposition of those scenes, the natural hand-off from one to the other, is so quiet, latent: coming home after a night out and being told someone you love had died. Bereavement always feels like it should be as huge a devastating and shattering thing as death itself, but the impact is often incremental, slow to process and affect. So Id goes to his room feeling as if a hole has been punched through his chest, with something missing, and cries for Annie in the dark.

After periods of isolation and anger, Id decides to set up a makeshift studio on the beach and play 'open,' uncomposed guitar sessions in the hope that one will connect with Annie somehow. These mammoth sessions are caught on a local radio frequency, and thus the legend of 'Doomboy' begins to grow, as Id pours all his feelings into his fingers and through his guitar, the music swirling and reaching out to people everywhere, making them feel... something. Different somethings. Nameless somethings. Sandoval resists giving Id a tonne of flashbacks to his relationship with Annie, but when she is shown she's a beam of solid cheer- lively and mischievous, the most tangible presence in the long stretches of haziness that have become Id's life. So while that decision may seem odd, as it robs some emotional depth from the story, it also keeps it from being too heavy- there's a particular tone Sandoval wants to achieve, a connection, but not despair- he wants you to be touched and sympathetic and amused and swept up a little. It's a story about dealing with grief and attempting to not be consumed by it, therefore the onus of belief passes to Id and his emotions and reactions. 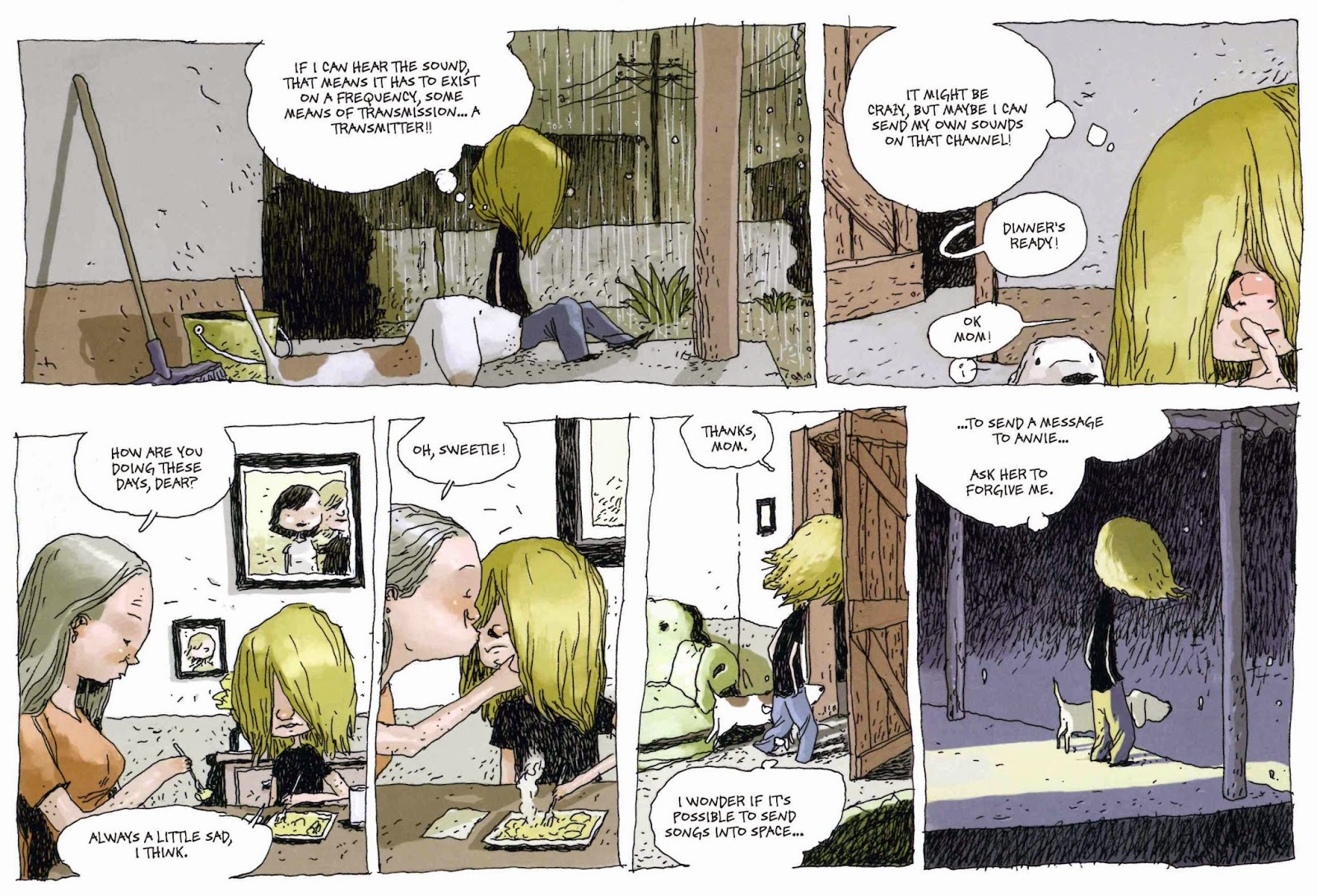 There's an element of 'the dead girlfriend' trope -where the death of a woman or girl is the instigation by which a male protagonist is driven to interest and action, and that's present here to some degree, but less stridently so. Essentially, Id's story is all about Annie- he adopts the moniker she gave him -'Doomboy'- and attempts to do something for her, to be able to connect and reach her one last time- it's a finite mission of personal scale. The vein of specialness he hits is only temporary, and the unwanted small-scale fame thrust upon him extends to a number of people withing his town and brings only trouble. Doomboy is a timeline of Id's grief for Annie and the manner in which he deals with it. The hole in Id's chest festers and becomes filled with something more sinister and dark, a venom which he tries to play out through metal and music: at first harnessing the anger and giving it release, and ultimately realising that it can be something that envelops and devours him, and letting it go. No doubt, too, Id is named such with reason, his emotions and reactions are very instinctual and come from a place inaccessible to others, he feels a need to process through music, a nameless energy that tells him to do and requires fulfilling and satisfying -the Freudian desire to create is here transferred onto the creation of art. 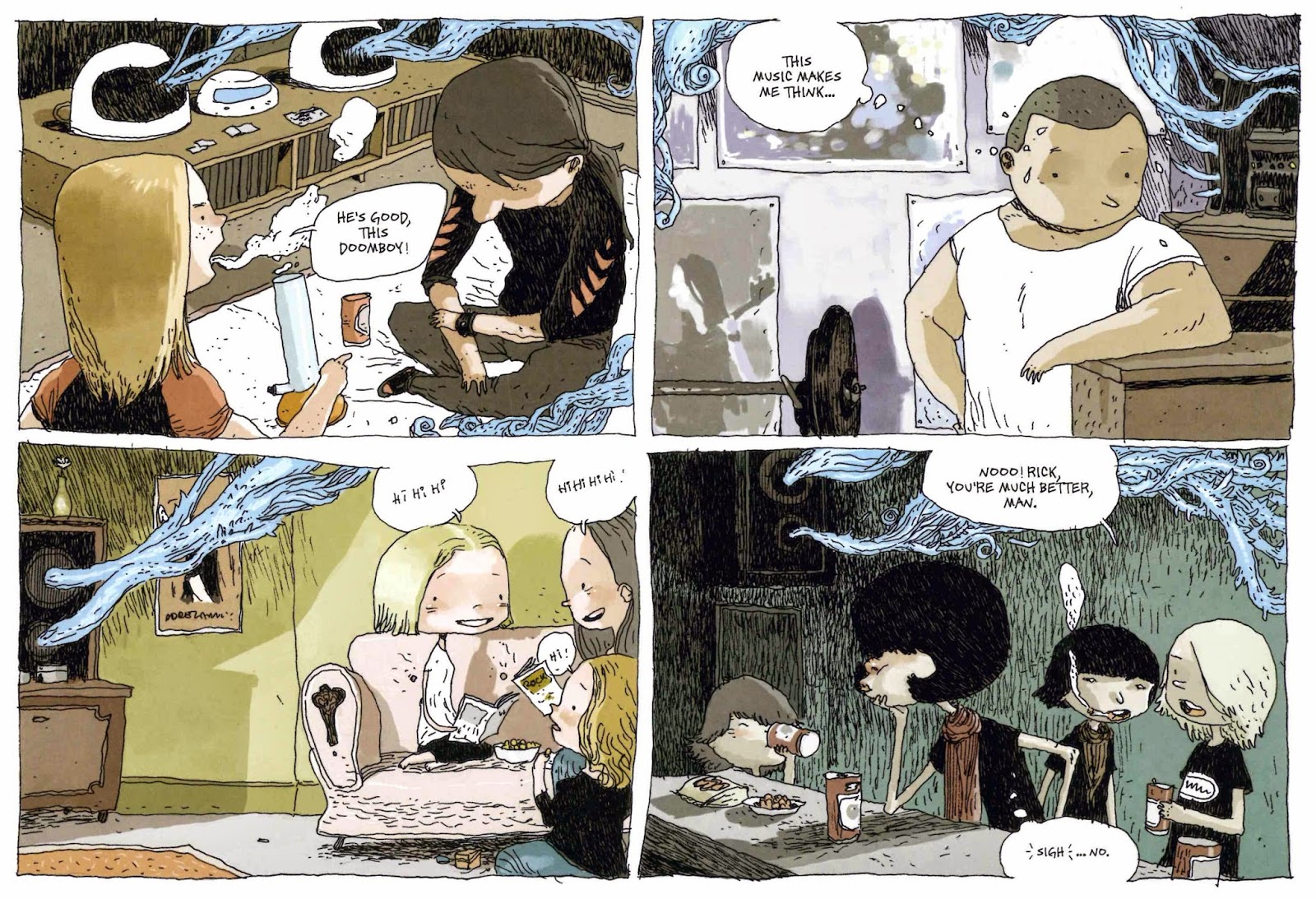 There are a couple of threads that Sandoval again allows to thrum parallel to the main narrative, bolstering its ideologies; Rik's (a musician who Id used to hang around and play with) need to be the best, and his jealousy of Id is portrayed as creatively corrupt and inadequate- the desire to be successful has eclipsed the passion Rik may once have had for music and the place from which he played. Now he's bent on success and recognition at the cost of all else- so Doomboy's rise is unacceptable, even as he inwardly acknowledges the beauty in his music. Similarly, the secret relationship between Id's friend Spaghetti and Trevor- the latter ending things with  Spaghetti due to a fear that coming out as gay will hamper his tough guy image and lose him friends- helps Id gain some perspective, in seeing that there are others around him alive and unhappy and unfulfilled and pressing on. There is perhaps one too many of these plot-points -one involving a girl selling stars is superfluous- and yet Sandoval handles them in such a deft, tender way that it doesn't really matter.

What really holds Doomboy together is Sandoval's art- his paintings are dreamy and light, his colours intuitive, ensconcing a sense of calm over proceedings; the small seaside town landscape here really helps to anchor the book; Sandoval making gorgeous use of the sky: violet and peach clouds glowing with underbellies of sunshine, thunder cracking down on an army of equine grey steeds (one of the artistic highlights is the bringing to life of visual metaphors). He alternates colours and washes wonderfully to create mood and ambiance, sharpening and softening contrast for effect; his use of that quick, quasi-faltering line with lots of hatching imbues character and heart via the lack of apparent deliberation. His characters have that large headed proportion of creepy dolls, but Sandoval keeps their features open, sweet, just a little quirky- that even the decision to constantly hide character's eyes with hanging hair isn't irritating but more amusing. From beginning to end, Sandoval's managed to seep Doomboy with such appeal and easy charm, that despite its mis-steps, it serves to facilitate his choices, and flourishes and holds. 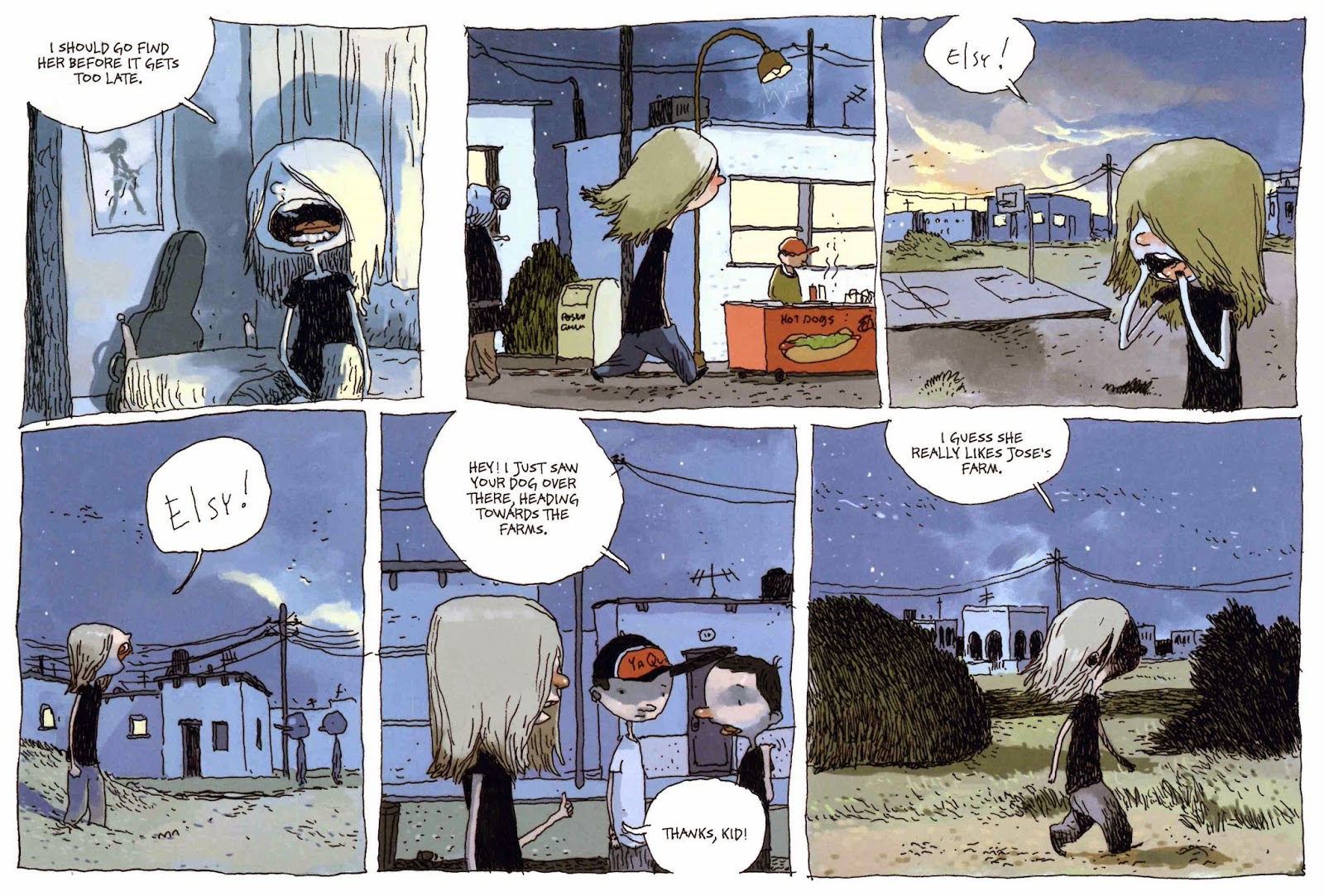 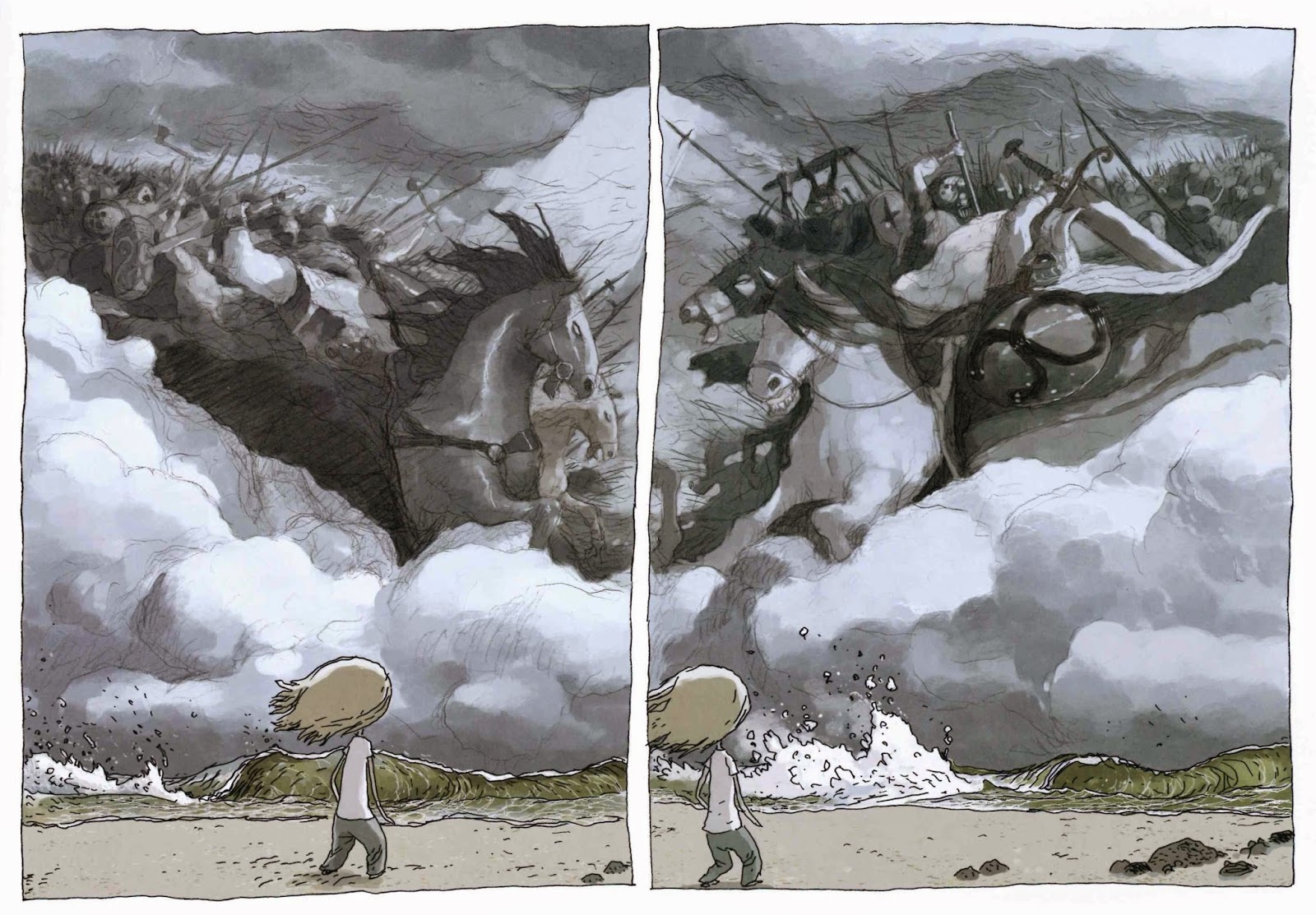 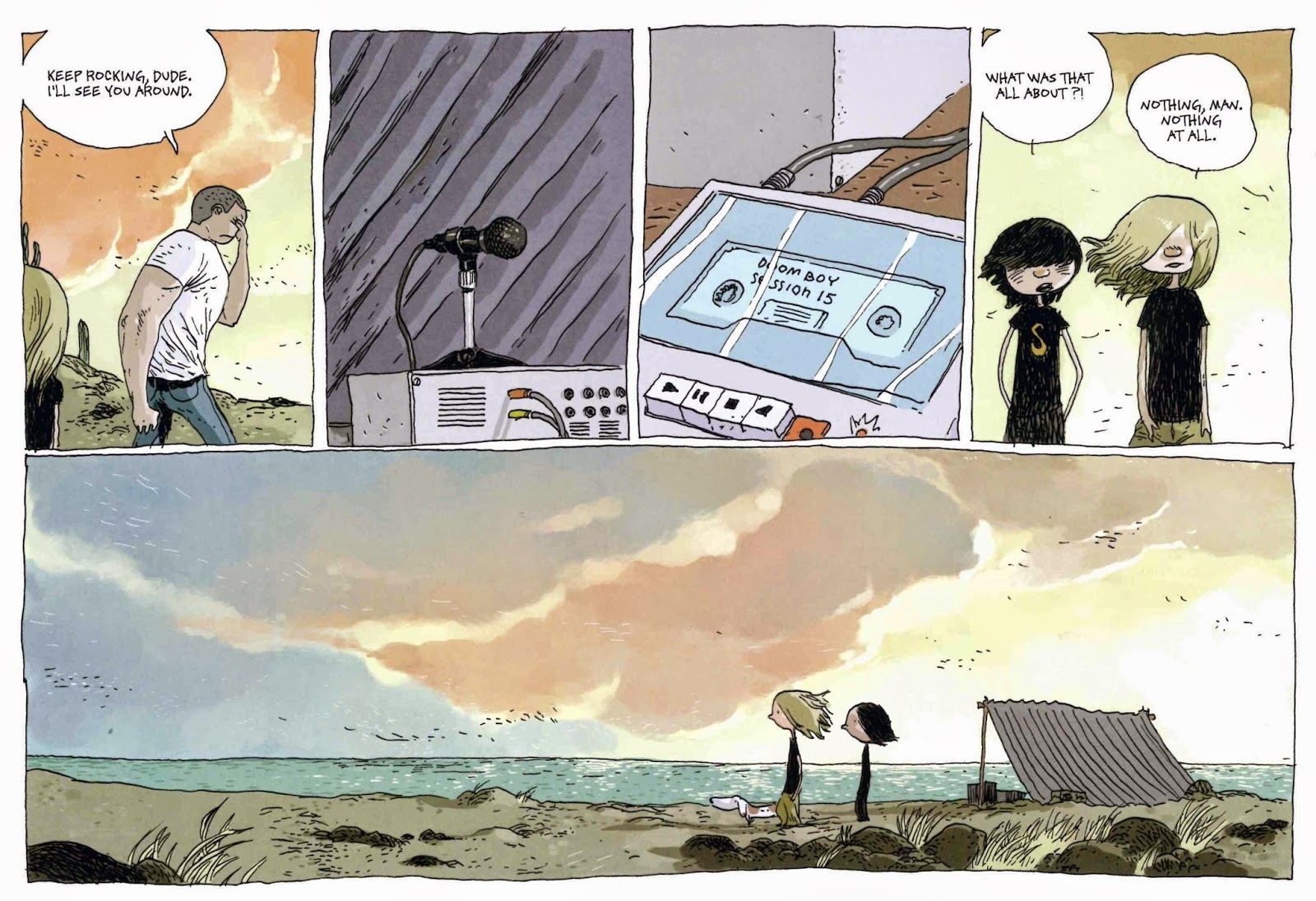