I thought I'd document all the comics I bought recently from Canada. What initially started out as a trip to attend the Toronto Comics Arts Festival turned into a slightly longer holiday. I didn't really have any plans to write a post-convention report going in, and I don't have one now; the aim was to simply have a break and enjoy the experience unfettered. But some quick notes:

I've split this post into two categories: purchases made at the Beguiling, and purchases made at TCAF. The majority of what I got from The Beguiling is all older comics, hard to find, out of print, things that have been on my mental list, or whatever looked interesting. It's a superbly curated shop, and there's a truly vast range of material fitted into what's essentially a pretty compact space, even over two floors. I'm not sure if it was TCAF related in that they're the people who run it, and must get a lot of visitors around that time, but it was quite messy and dark. The lighting on the lower floor (which I think is windowless, or the window is covered) in particular is sort of dingy. Labelling of sections could be much better- there's cardboard markers in bookshelves with felt-tipped headings. My view on comics shops is that anyone should be able to walk in and books be accessible to them at least in terms of clearly marked areas of interest/genre/etc. But you can't fault the stock.

Oliver and I spent a lot of time going over in our heads how much luggage allowance and money we had, which books would probably be easy to get hold of in the UK, but we both ended up buying a load anyway. One of the highlights of the trip was visiting The Beguiling twice, hunting for books and then eating at Butler's Pantry just a few feet away- they do some delicious fish cakes and samosas. Also the first time I've had coke in a jar... 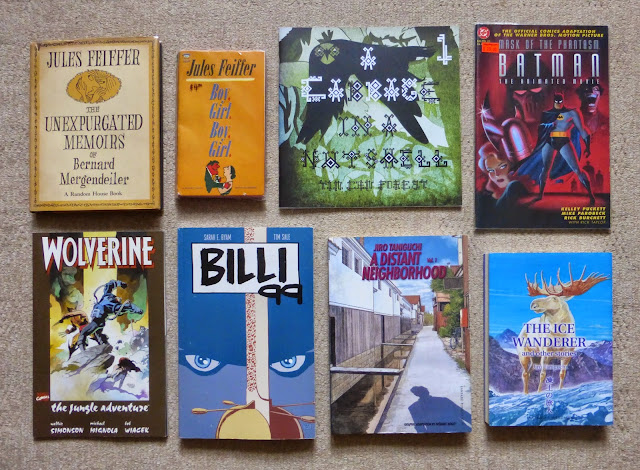 The Unexpected Adventures of Bernard Mergendeiler, and Boy, Girl, Boy, Girl by Jules Feiffer- I like Jules Feiffer a lot- probably more early Jules Feiffer than anything
A Cabbage in a Nutshell by Tin Can Forest
Batman: The Mask of the Phantasm official movie adaption by Kelley Puckett, Mike Parobeck, Rick Burchett and Rick Taylor
Wolverine: The Jungle Adventure by Mike Mignola, Walter Simonson, and Bob Wiacek- slowly trying to get hold of all Mignola's obscured 90's past. I think this is still easy to get on sites like Ebay, but it was there, so.
Billie by Sarah E. Byam and Tim Sale
The Ice Wanderer and Other Stories, A Distant Neighbourhood volume 1 by Jiro Taniguchi- My appreciation for Taniguchi has been something that's crept up on me. He's never previously stood out as someone I'd think of naming as one of my favourite authors, but recently I've read more of his work and now am finding I've enjoyed everything he's done- his work is probably the definition of beautifully understated which helps it fly  under the radar. It can suck to be late to the party, though, as a lot of his early books are now out of print, such as A Distant Nieghbourhood, above. 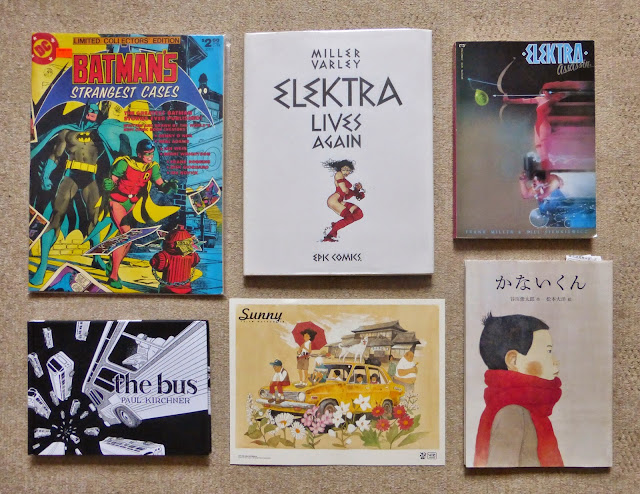 Batman: Strangest Cases by Denny O'Neil, Neal Adams, Len Wein, Berni Wrightson, Dick Giordano and more
Elektra Lives Again by Frank Miller and Lynn Varley- hardback oversized edition, which made it tough to turn down. The Miller Elektra books are ones I've been meaning to get around to reading eventually, and seeing attractive editions of them pushed me into actually buying them.
Elektra Assassin by Frank Miller and Bill Seinkiwicz- signed by Seinkiwicz. There were a few paperback editions of this but I liked the cover on this one best.
The Bus by Paul Kirchner- this hardback collection is really hard to get hold of for a reasonable price, and despite it being available online in full, it's one of those that I like enough to want a print copy of.
Picture book, and Sunny print, by Taiyo Matsumoto (free with purchase)- I was really after The Art of Ping Pong the animation book, but apparently they'd sold out of them all. Trying desperately not to fall down the rabbit hole of beginning to buy comics and picture books in languages I can't understand, but fighting a losing battle. 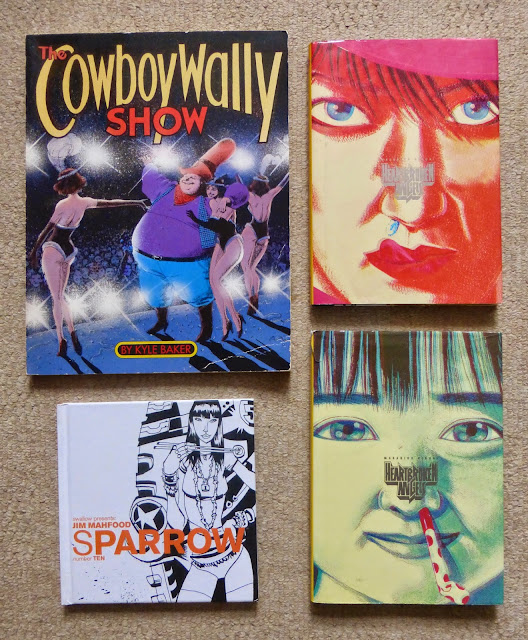 The Cowboy Wally Show by Kyle Baker- Baker's another of those brilliant authors whose oeuvre I'm collecting. Was previously confused by the many editions of The Cowboy Wally Show, but it appears they're all the same, just printed at different times with different covers. I wish DC would collect and release his Plastic Man run properly.
Heartbroken Angels 1 and 2 by Masahiko Kikuni- never heard of this before but the covers and design were intriguing. You can't tell from my poor photography, but they're little hardbacks with metallic, fuzzy blurred cover art.
Sparrow by Jim Mahfood- I didn't know the Sparrow books were so tiny? The Beguiling had a few, but Jim Mahfood was the only artist I liked. 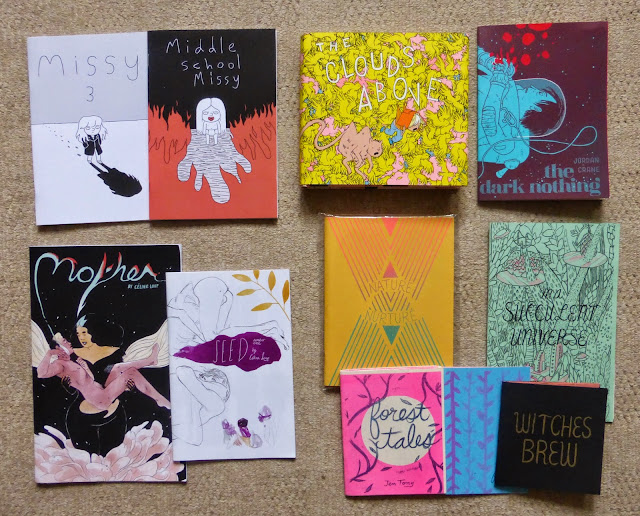 Missy 3, and Middle School Missy by Daryl Seitchik- it was so cool to be able to meet Daryl in person- she's the best- and hear about secret upcoming stuff which you should all keep an eye out for.
The Dark Nothing, and The Clouds Above special edition by Jordan Crane- The Dark Nothing was a TCAF debut, limited to 200 copies, and I don't have The Clouds Above, and this gorgeous limited, special edition was impossible to resist. I believe it has interlocking dust jackets that when put together make a larger design? Crane is easily one of the best print book designers in the business- everything feels attended to and special.
Mother, and Seed by Celine Loup
In A Succulent Universe, Nature Nurture, Forest Tales 1 and 2, Witches Brew by Jen Tong- I'd never come across Jen Tong's work but she works with screenprint and riso a lot, and it largely seems to be heavily image or nature focused, both of which I'm really into at the moment. 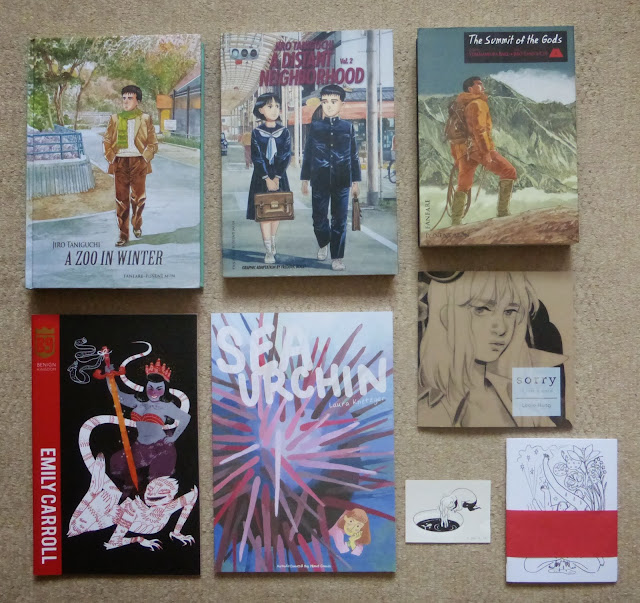 A Distant Neighbourhood volume 2, Summit of the Gods volume 1, A Zoo in Winter by Jiro Taniguchi-  As mentioned, a lot of English language Taniguchi is either out of print really hard to get hold of in the UK for some reason- A Zoo In Winter, for example is currently selling for £40+ on various sites. We chatted to someone at the Fanfare/Ponent Mon booth about the early volumes of Summit of the Gods being out of print and he said they were looking to re-issue them, but didn't know when it would happen. I looked into starting the series a while back -it's now on book 5- but couldn't get the early volumes; Oliver was super kind and bought me the first volume, which is the most expensive to get hold of. I'd picked up the first volume of A Distant Neighbourhood at The Beguling the previous day, so it made sense to get the second book, too.
Emily Carroll Benign Kingdom artbook- Again, this is an older publication, but one I don't have. I actually met Emily, and Kate Craig  -whose comics I also really like-, on the way to The Beguiling and assumed they would be at the festival, but I don't think they were.
Sea Urchin by Laura Knetzger- looking forward to reading this. Laura Knetzger's producing some ace comics work.
Sorry by Leslie Hung
Fuck Wizards by Eleanor Davis- fun porn, and a little piece of original art! 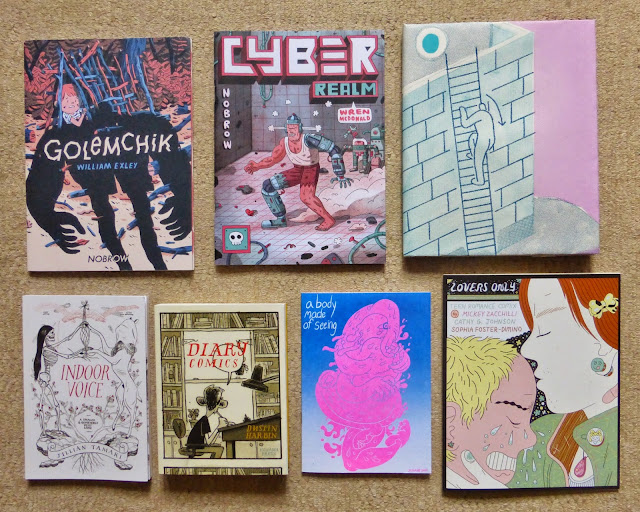 Golemchik by William Exley
Cyber Realm by Wren McDonald
Advice Comics 1 anthology by various- there's a Tumblr for this here
Indoor Voice by Jillian Tamaki
Diary Comics by Dustin Harbin
A Body Made of Seeing by Sloane Leong- talked a bit with Tucker Stone about how amazing Sloane Leong's work is- she, along with Laura Knetzger and Sophia Foster- Dimino feel like 3 cartoonists who are operating at a level above everyone else right now, in very different ways to each other. So good to see and be part of as a reader.
Lovers Only #1 by Sophia Foster Dimino, Cathy G Johnson, and Mickey Zacchilli 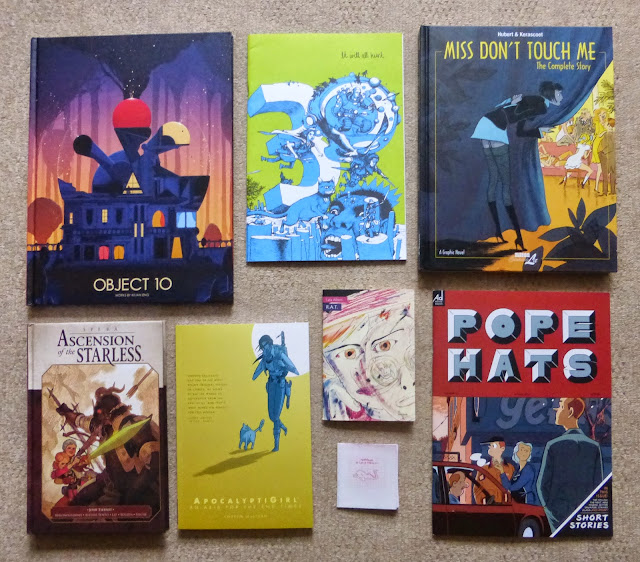 Object 10 by Killian Eng- I'm a big fan of Swedish illustrator Eng's work; Floating World were kind enough to send me his earlier artbook, Object 5, which is very reflective of his progress, and this one really shows how much he's developed since then. I'm going to try and do a double review at some point.
It Will All Hurt #3 by Farel Dalrymple- final installment, the print edition debuted at the show
Miss Don't Touch Me by Kerascoet and Hubert- I had the paperbacks NBM originally put out when they translated this, and have been meaning to upgrade to the hardback, album-sized edition as it' a book I love, and seeing it in the flesh made it tough to resist.
Spera Ascension of the Starless by Josh Tierney, Afu Chan, Giannis Milonogiannis and more- Archaia books are tough to get hold of in the UK generally
Apocalyptic Girl by Andrew MacLean- read this in the hotel- the art and colours are so impressive but it's really let down by the story.
RAT  by Lala Albert- I met Lala! She was so cool, and I was hot and tired.
Metaphor by Katie Parrish- been following Katie's work online for a few months- I didn't know she'd be at the festival. People seemed to be taking to her work.
Pope Hats #4 by Ethan Rilly

I also picked up Joe Decie's new comic -at least I thought I did; we got caught up in chatting and I don't really remember- which he was giving away for free(!), but for the life of me I can't find where I've put it.
Posted by Zainab at 15:54