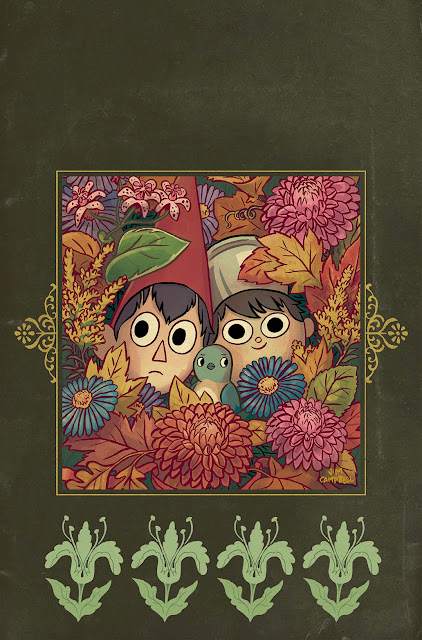 Patrick McHale and Jim Campbell will be publishing a new Over the Garden Wall mini-series this summer, under Boom's all-ages imprint, KaBoom! The 4-issue mini-series will be set set between the third and fourth episodes of the animated series, and take brothers Wirt and Greg on another adventure through the woods of the Unknown. Over the Garden Wall is a 10-episode cartoon series created by McHale, which aired on the Cartoon Network last November, as somewhat of a landmark as the network's first original animated miniseries. Centering around half-brothers Wirt and Greg (voiced by Elijah Wood and Collin Dean), the two become lost in a strange forest called the Unknown, and in order to find their way home, must travel across the apparently magic forest, with the dubious help of the is-he-friend/is-he-foe old Woodsman (Christopher Lloyd) and Beatrice (Melanie Lynskey), an irritable bluebird.

It was one of the best things I watched last year: gorgeously animated, and perfect in tone- a mix of wonder and fear, odd whimsy, imbuing semi-familiar facets with new interpretations whilst being fun and interesting. Greg and Wirt's relationship is at the heart of the story, and in particular the age difference between the two and the way that affects their dynamic. Wirt's older, and beginning to worry about the world, anxious about his feelings and his place, whilst Greg is irresistible in his optimism and lively imagination- they keep each other balanced, somewhat. The little ditties and music in each episode were instrumental in making the series special, so much so that when Boom released a one-shot tie-in comic (also written by McHale and illustrated by Campbell) in conjunction with the airing of the show, it included song-sheets. That comic was very good, so I'm thrilled to see there'll be more. For those who haven't haven't watched the show, McHale talked to Hero Complex about setting up the comic for audiences both familiar and unfamiliar with the cartoon:

'I don’t know if most people who read it will have seen the series, but I’m sort of assuming a lot of people who are reading the comics will have, so there are certain things we can kind of give away earlier. Like maybe Beatrice can say things that will make the more knowing audience be like “Oh, that’s going to be revealed later,” and setting that up even more. I’m speaking very vague.

But also I think they should be able to stand alone if you haven’t seen the show. We’re trying to do it so that you can still know who the characters are and follow [the story] just if you pick [the comic] up. With the show we tried to do that too. Even though it was a continuing story, each episode stood alone as its own little tale.'

The first issue of  the mini-series is due for release in August.

In other Over the Garden Wall news, Cartoon Network released the original pilot to the series, titled 'Tome of the Unknown' which I've included below for viewing ease (videos on the Cartoon Network website aren't accessible in the UK, and no doubt other countries also).