I've been catching up with any interesting comics news post-Canada trip, and easily the most exciting announcement I missed was UK publishers Soaring Penguin Press acquiring the English language rights to French comics superstar Boulet's Notes. The Notes series is the print collections of Boulet's (real name Giles Roussel) hugely popular and acclaimed webcomics, which have deservedly bought him international fame, and so far runs to nine volumes in its native France where it's published by Delcourt. Soaring Penguin Press' Nora Goldberg informs me that the deal is for the whole series, with the first volume due for release in April 2016, with book 2 following in October of the same year. The plan is to release a volume every 6 months or so until the English language editions have caught up with the French. This is really good news and a great get for Soaring Press, too- they've been quietly translating more European comics: last year Regis Loisel's Peter Pan and Newt by Nicolas Mahler and Heinz Wolf, with more planned for 2015, and no doubt this will help boost their stable and visibility.

I've talked about Boulet's work often, and regularly lamented the fact that more of his work isn't available in English (the only book I can think of is his spectacular 24 hour comic, Darkness/Noirnesss, that AdHouse published last year), so I'm genuinely thrilled with this overdue news, and hope it might push others into picking up even more of his works. However, instead of regurgitating more praise on what makes Boulet's work special, I thought I'd share this interesting snippet I came across written by the man himself as he describes the beginning of his career in comics, and how his webcomic came into being:

'I started almost 15 years ago, while I was still studying in Art School in Strasbourg. At this time I had some occasional jobs with a magazine called Tchô !  I worked with them for about 10 years, producing 13 comic books for young public during this time. I was contacted then by Lewis Trondheim and Joann Sfar to work on their series Dungeon, I realized 2 albums with them (later these 2 albums were translated in a unique volume in english, called Back in Style)

During all this time I never stopped drawing on sketchbooks, telling stories about me, my life, and any idea that was going through my head. So in 2004 I started a webcomic with this material. It quickly became famous: about one year later, it got 7000 unique visitors every day. So I went on. I drew more stories every week in total improvisation. Like some sort of comic stand-up comedy. Eight years later, the average day is around 50 000 unique visitors/day.

During these 8 years I drew almost 1500 pages, which I finally got published in 2008. This series, called Notes, is now up to 7 volumes, with 2 more to come. In 2010 I decided to start an English version (just as a personal achievement, to see if my work would meet a public out of France). The beginning was tough because it asked a lot of organization between me and the benevolent translators. I finally gave up the outside help and decided to translate it by myself. The English page (english.bouletcorp.com), even with my awkward translations, is now up to about 8000 unique visitors/day.' 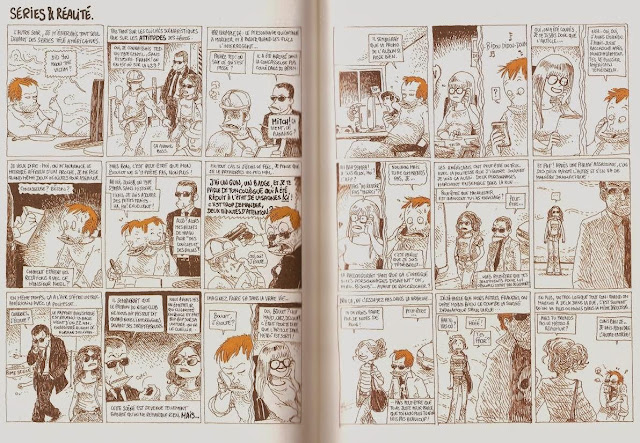