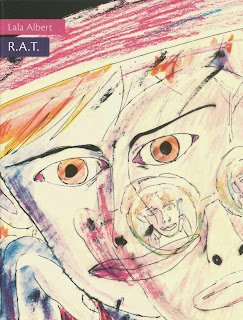 The standard at which Lala Albert is currently operating is such that even with an ostensibly more accessible comic -linear 'story' focused narrative, more 'formed art'- she creates a simultaneously fun and arch tale that addresses several contemporary social issues. Surveillance, a growing lack of privacy, the role of technology within that spectrum hover as background themes to related, specific topics of voyeurism, power, control, and abuse.

R.A.T. is a program that allows its users access to webcam streams -in addition to a facility where you can see who is using the program and what they are 'ratting' (watching). Unbeknownst to her, Candy is the subject of one such RAT, a man who watches her continuously, his intrusion and voyeurism made easier because Candy remains ever connected and never turns off her computer. Typically, he cites this as a way to slide blame onto her, 'sometimes I think she downloaded the file on purpose,' even as he's aware of what he's doing and that it's wrong; calling the people he rats on 'victims.' Candy isn't his lone victim, but his 'favourite.'

Albert tattoos a familiar pattern of abuse and exploitation: the invasion of privacy is only attractive to the man when the subject is unknowing and unwilling, when he has power or control over the watching, and the ability to build and project his own fantasies and narratives around those he spies on. When Candy's own interest and boredom leads her to investigate the R.A.T program, she discovers one of the streams is her own webcam, and that a RAT is watching her. Post the initial shock, she decides to turn the tables: even the field and lets him know she's aware he's there: pulling funny faces at the screen and holding up messages. The man appears disturbed and unnerved- this isn't what he wanted. Not only does he lose control of the image, and the narrative he's constructed around watching Candy's silent activities- whilst she's unknowing, he can make her subservient, he can be in charge-, but her silly, unfazed, and commanding response shatters those illusions. There's surprise too in the realsiation that she's a real, actual person; spending so much time online has led to a reduction and objectification of humanity and personhood.

Candy's response isn't nonchalance or product of a systemic apathy and ignorance of surveillance; she's taking back control of her violation and thus ridding her abuser of any power. It's interesting to see the difference presented between Candy and her friend's attitudes towards the R.A.T program and the man's. Candy's suggestion that they try it out doesn't enthuse her friend- 'our lives are all so boring anyway.' Flicking through a few screens, Candy agrees, (even as she flicks past some people having sex), but seems to understand that fundamentally, the issue isn't one of boring or exciting, but of watching without consent- while the lack of consent is precisely what the man is getting off to -regardless of how mundane the activity.

Albert's art has always been instrumental in creating a particular mindscape of feeling- pushing the reader a little towards a state that facilitates an openness to her ideas.  The way she draws faces in particular- sometimes very taut and skull shaped, sometimes just a little too wide, makes them malleable to take on shifts in tone and expression: leaving the reader onguard about seating characterisation. The spiky, thin lines. are similarly anticipatory- something is going to happen. She interlays and interposes images to vivid, skewy effect here, helping to really anchor liet motifs of eyes and screens, reflections, seeing. There's a fantastic punch of an image where the man is watching this vast multi-screen that show Candy doing a variety of things; the power-play and suggestion is wonderfully balanced so that he's semi-placed in a position of charge (although it's very like an outdated villain in a movie), yet the pages is filled with Candy, looming and enormous; the oncoming storm. 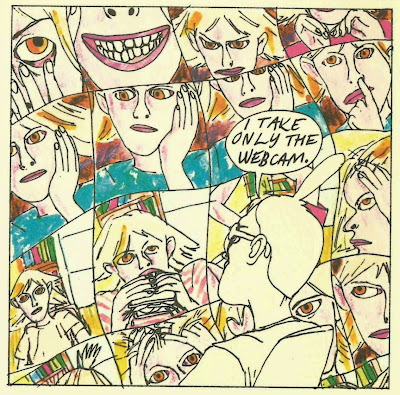 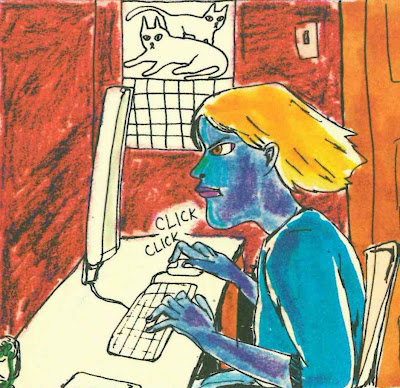 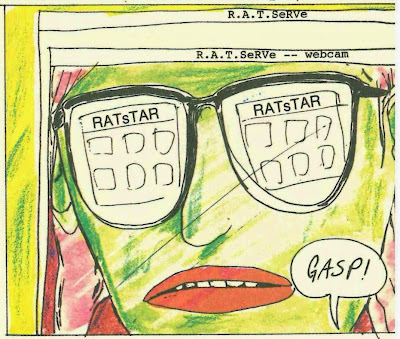 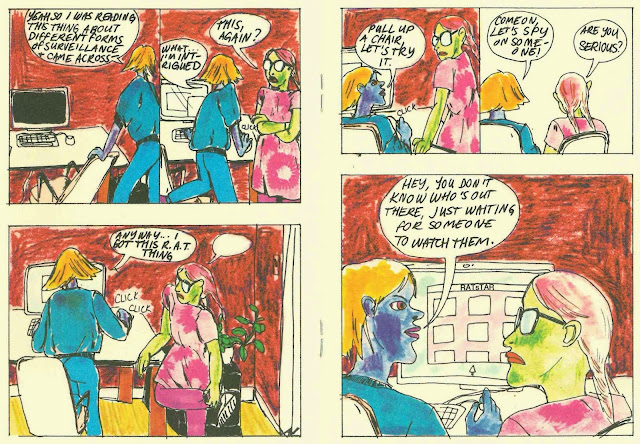