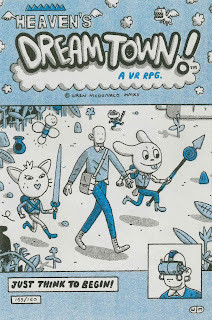 Heaven's Dreamtown by Wren McDonald: I like Wren McDonald's comics a lot. It may sound moronic to say that they're a very visual experience -they're comics, after all- but he's one of those artists who seem to revel in their work and filling pages with as much background, detail as possible- from the advertisement for the virtual reality gaming goggles on the back cover to the gridded endpapers. McDonald's comics are largely specifically influenced by gaming of the older school disposition- pixelated adventure role plays. His narratives see people either inhabit a world where that setting is a reality and their day-to-day existence ivloves dodging moving platforms, being chased by strange characters, foraging and collecting, -or it's a part of their life in some significant way. Heaven's Dreamtown belongs to the latter group.

The nameless protagonist of Heaven's Dreamtown lives in a world where it's possible to plug game goggles/head harness directly into a socket-like implant into your neck and control it with your mind. He works a tedious, monotonous, manual job at some sort of line factory where everybody wears the same uniform. He might be a robot or he might not be- who can tell anymore? Whenever he can he escapes into the more exciting realm of a game called 'Heaven's Dreamtown,' in which he's a bunny rabbit painstakingly accumulating points and objects, taking on challenges and foes to progress from one level to the next. Just as he hits the zenith of the game, he's accosted by a group of other players and tumbles all the way back down to the very first stage, before another player approaches him about a retaliatory team up.

Meanwhile in real life, in the factory, a fire breaks out. Pulling off the headset, he attempts to save a trapped co-worker but an explosion throws him clear. This all plays out silently: there doesn't appear to be much interaction between people in the workplace (or anyone else that we see); indeed the only speech/dialogue comes from within the game play, which McDonald differentiates by paneling with rounded corners against a black background- a screen-like effect enhanced by the blue-tone risograph colouring. I really like his use of sound effects to add drama and life to some of those quiet passages: 'bonk! bonk!' 'DOOM!.' He builds and provides an incredibly funny  and yet pathos-imbued ending, one that cleverly relies on a superb turn of the page moment for its full meaning and tone to be revealed.

McDonald's comics are hugely fun and appealing, and Heaven's Dreamtown is no exception. As a reader you can sense the enjoyment he takes in  drawing the various detailed settings, associated objects and ephemera: swords, food, plants, glasses, stones, tools, buckles,  instruments, helmets, and so forth. His stories also offer an interpretative exploration of virtual realities in gaming, from diversionary entertainment to the deeper alternate existence, positing questions as to where these lines are drawn and what's gained from the experience. While the game provides an outlet from the seemingly mundane existence of the protagonist, it also gives him a sense of purpose and , ironically, tangible advancement that's perhaps missing from his current, real-world situation. Being good at something that you enjoy, something that requires skill and captures the imagination, can be very fulfilling; it's a presentation of one of the positive facets of gaming. Simultaneously, he's not a cliche hermit gamer: he has an acute sense of what's actually important- actively trying to save his co-worker, and seems otherwise content and satisfied (depicted via his demeanour when he's at home with his pet). Despite the futuristic world, the robotic accruements, and all else, he's a person: human. More than anything what the VR system provides him -much like McDonald's work itself- is an engaging and enjoyable time. 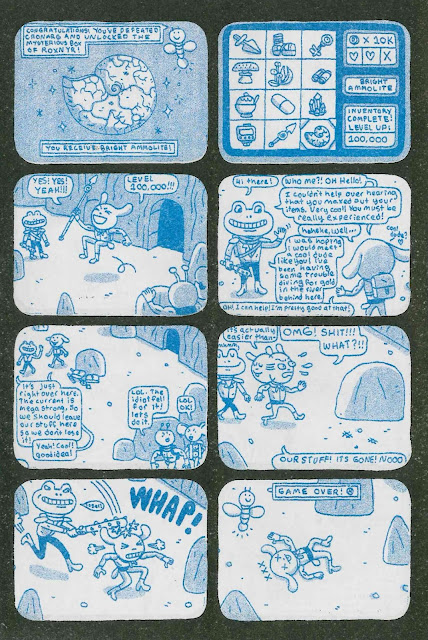