A mixture of the Ramadhan 'slows' and putting together various pieces for the AV Club (including a first look preview of James Stokoe's Godzilla in Hell issue going up next Wednesday, which I'm very excited about), and a bunch of ELCAF coverage has meant I haven't really gotten around to posting much over the past couple of days. There's been a few longer pieces on here recently, so I thought I'd keep things easy breezy and post some pictures of what I bought at ELCAF last Saturday. I'm pretty pleased with myself because for once I actually managed to maintain the integrity of my self-prescribed 'I'm not going to buy loads' vow- most likely due to the fact that I went overboard in Canada just over a month ago. I bought 7 books in total and some pins, stickers, figures, and a wooden wall sign. I like how streamlined my purchasing was; it made me feel better about myself- being more considered and not gorging on anything that looked good! You can get caught up in comics frenzy... There will -fingers crossed- be an array of more thorough ELCAF coverage next week, but for now, some dodgy pictures of nice comics and things. 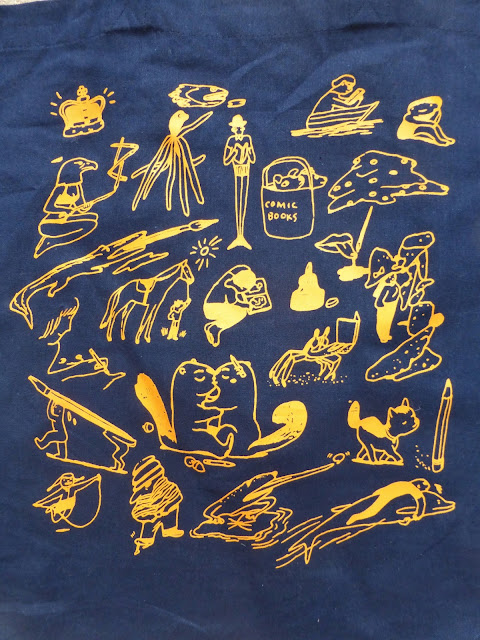 We were actually early enough to get a free tote- the 'treat' inside was exotically flavoured popcorn, which was nice. The tote itself is pretty nifty, too, the fluorescent orange of Jillian Tamaki's designs pop really well against the navy. Quite often, free things can be of, um, lesser quality due to it being designated as something to give away, but not here. The tote is made from cloth and is stitched and generally fancy and good. 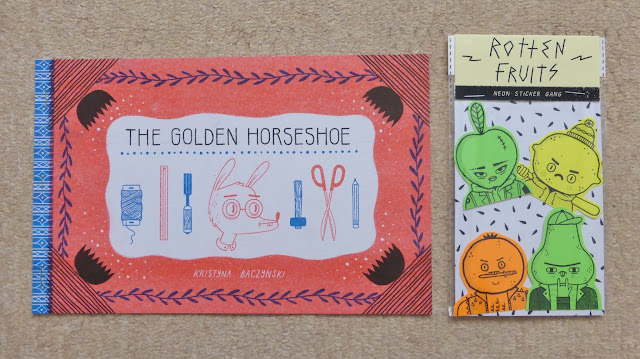 It was nice to get to see Kristyna Baczynski and be able to chat to her a little. I've seen her at so many cons, but never really had the opportunity to talk, so that was cool. She always has a plethora of lovely wares at her table which always seem to be popular with people. I'd seen her tweet about these 'rotten fruit gang' stickers and knew I had to get some. The Golden Horseshoe is one of her newer comics, which she's printed with her own riso machine. 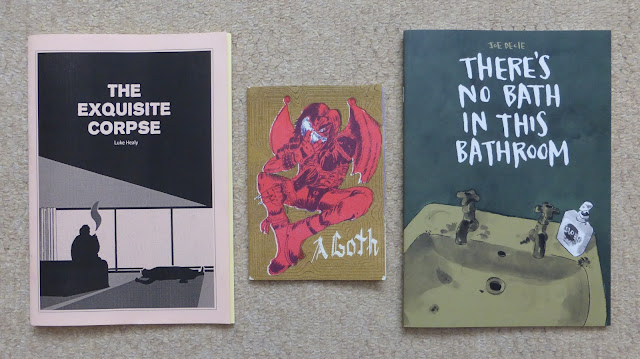 The Exquisite Corpse by Luke Healy, A Goth by Patrick Crotty, and There's No Bath In This Bathroom by Joe Decie. I first read The Exquisite Corpse after Healy posted it online- it's about a fitness program that involves swapping bodies while the trainer works you into the shape you'd like. He originally created it for an anthology, but now the rights have reverted back to him so he's produced print copies. It's excellent and I recommend reading it if you haven't already. A Goth is Crotty's newest minicomic- I'm not sure what it's about, but I like most of what he does, so I picked it up. Finally got a copy of Joe's comic about TCAF featuring a few familiar cartoonist faces, after stupidly not picking one up while actually there. It's as good as you'd expect- I haven't read a Decie comic that I don't like. He's just consistently very good. 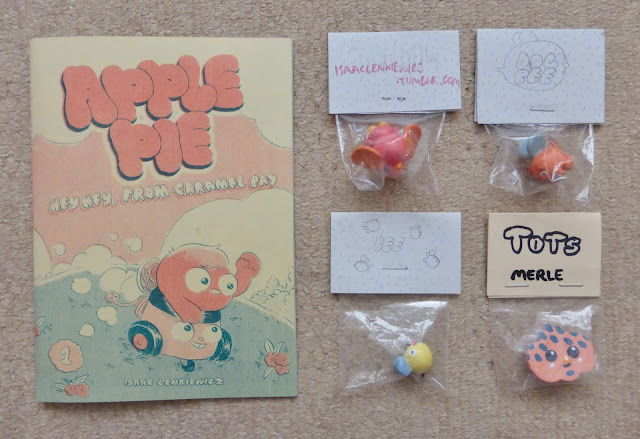 Got Isaac Lenkiewicz's newest comic, Apple Pie/Hey Hey from Caramel Bay. It's wonderfully drawn. Yes, that's Henry the vacuum on the front cover. He also made and was selling a host of the cutest handmade pins and tiny sculptures and it was so hard to not give a home to them all. Oliver was no help in choosing; he told me to buy all of them. Repeatedly. Whilst laughing in my face. The peach and blue tots wooden pin is by his table-mate, Alfie Phillips. 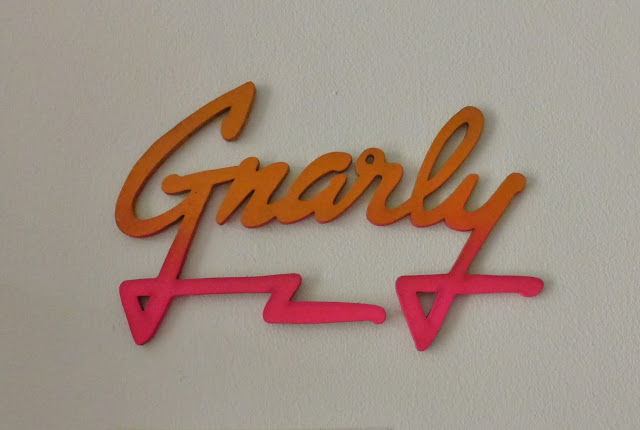 Ah, I love this wooden sign I bought so much! Look, I already hung it on my wall (with blutack). It reminds me of retro flashing neon lights- especially the font,  the kitschy kind you see in movies but never in real life (not in England, anyhow). But I like it best because it says 'gnarly,' which I am. It came in a teal and pink colourway, too, which was equally as sexy, but this one swung it; I like the contrast of the bright colours with the grumpy meaning of the word. I couldn't find a card at the table, so I'm not sure of the artist or collective, but they were selling some amazing wood sculptures, prints, and signs- there was a super nifty 'tropical' one and a pineapple which were hard to leave behind. 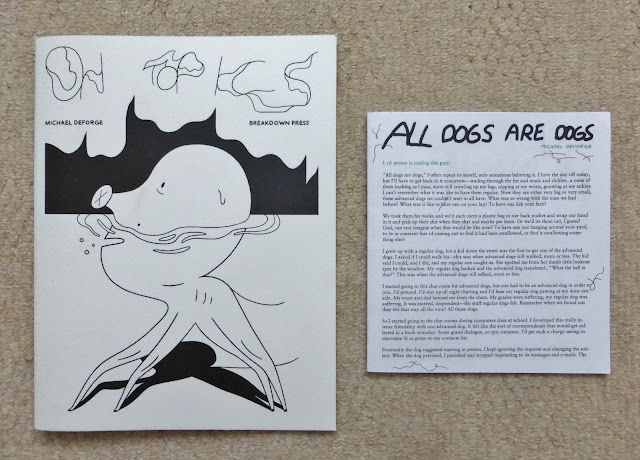 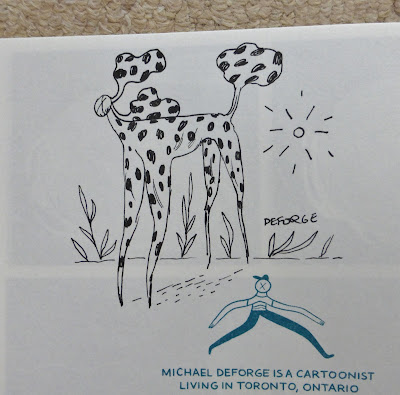 On Topics by Michael DeForge from the Breakdown Press table.  All Dogs are Dogs which is a prose thing Michael gave me which I haven't read yet, but has the best stage directions. I think his recent show was of the same name, so perhaps it's connected to that in some way. I'm a huge fan of his work, so it was majorly cool to get to meet him, and he seems like a sound guy, which makes it doubly nice -or nauseating depending on how you look at it. I find it really odd meeting people who make art which I consider superb, and then connecting a person to that. People are just people, generally. Anyway, Michael was lovely- it was his first time in the UK. I hope he comes to Thought Bubble and gets to experience actual, real England- somebody should invite him, since D&Q are going to be there this year. I got him to draw in the On Topics book. I'm going to say it's a dog because I can. 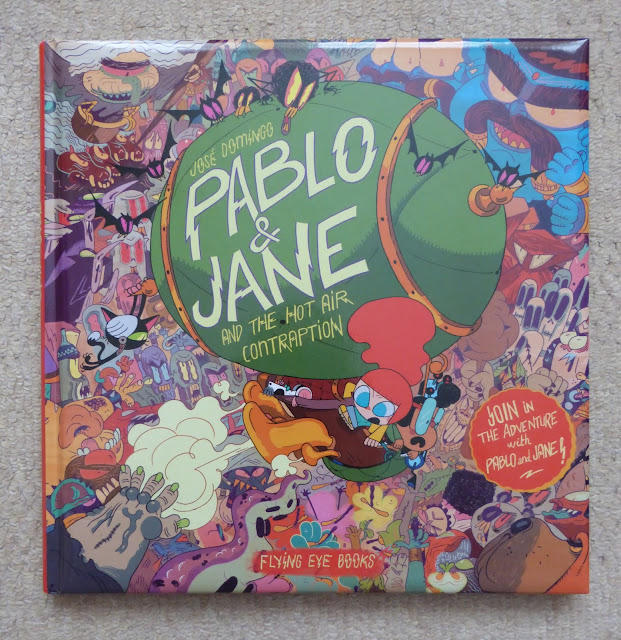 Pablo and Jane and the Hot Air Contraption: This was the first book I bought, and along with the DeForge release from Breakdown Press, the book of the show according to me. It's a children's book by Spanish cartoonist José Domingo (Adventures of a Japanese Businessman), published by Nobrow's kids imprint, Flying Eye Books, who were selling advance copies at the show. Bit sad I didn't get to say hello to Domingo as he was around, but I'm okay with largely having sat in the restaurant/bar next door and just talked a lot at people while drinking coke. It interposes traditionally panelled comic pages with double paged illustration spreads filled with incredible riots of colour and bus activity- there's so much to look at. I'm crazy about this book and will get around to reviewing it eventually, but for now I took a bunch of pictures to show you exactly why you need it in your life.

Here's the official story blurb, too, if you're interested: 'A strange green glow is coming from the old house up on the hill, and when Pablo and Jane decide to inquire they make an unexpected discovery! Zapped into the Monster Dimension by the evil cat, Dr. Felinibus, they must now find a way home in the broken Hot Air Time Machine, with a little help from their friend Dr. Jules (a nineteenth century scientist trapped inside the body of a rat).' How brilliant are these pages: 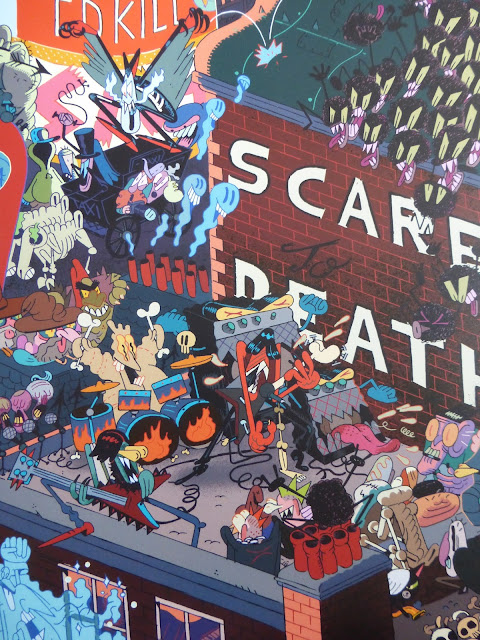 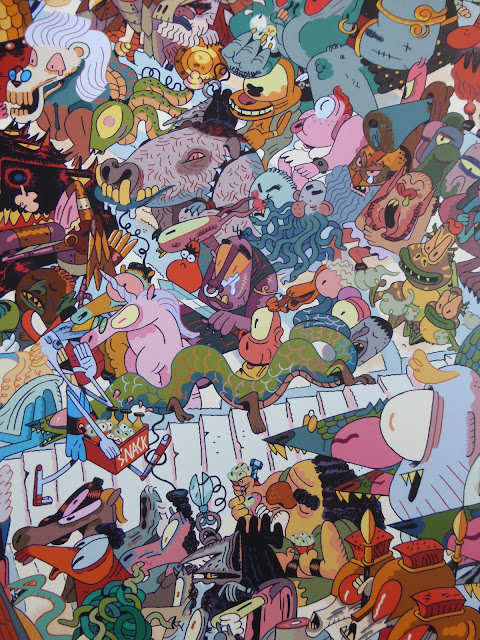 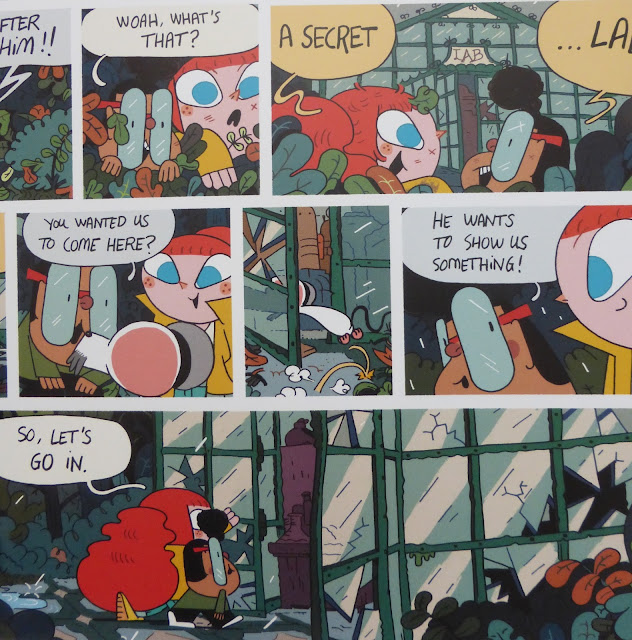 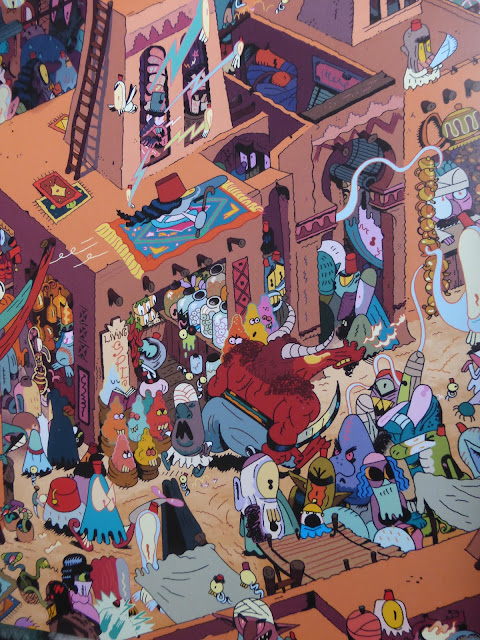 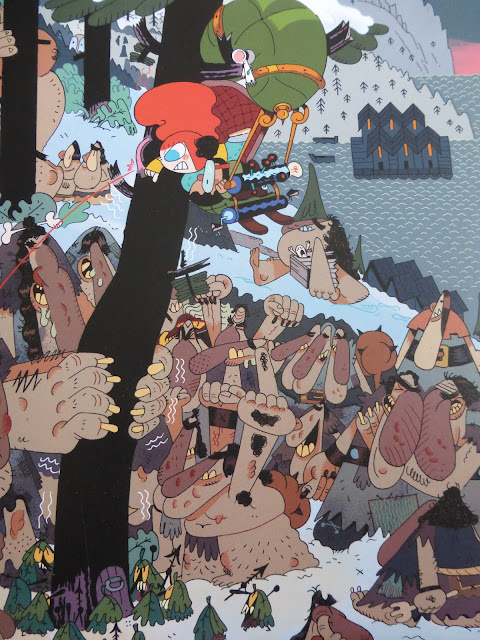 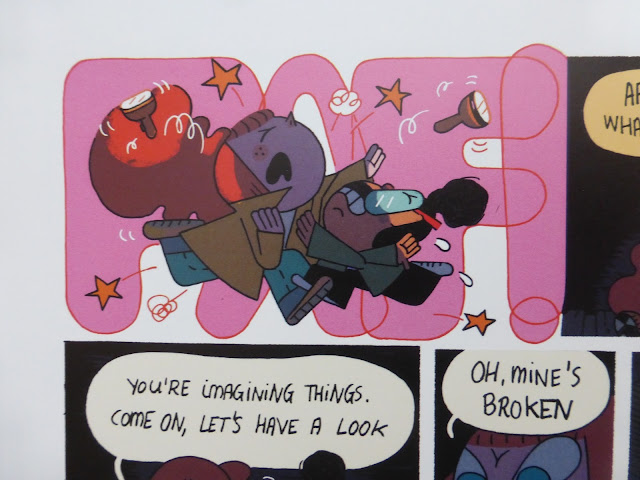 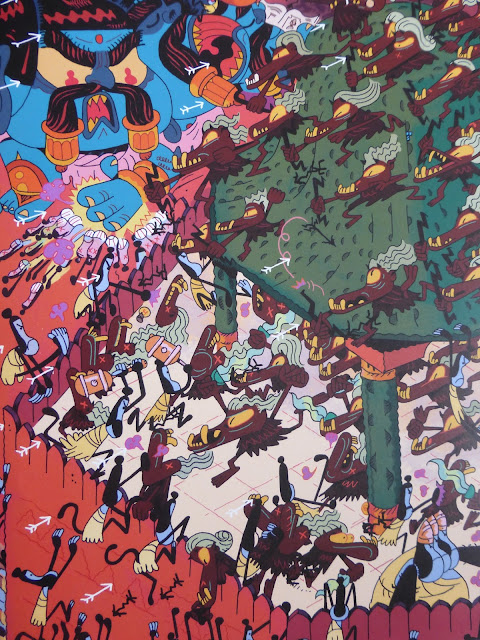