Ian Culbard and Dan Abnett return to 'Wild's End' for new miniseries, 'The Enemy Within' 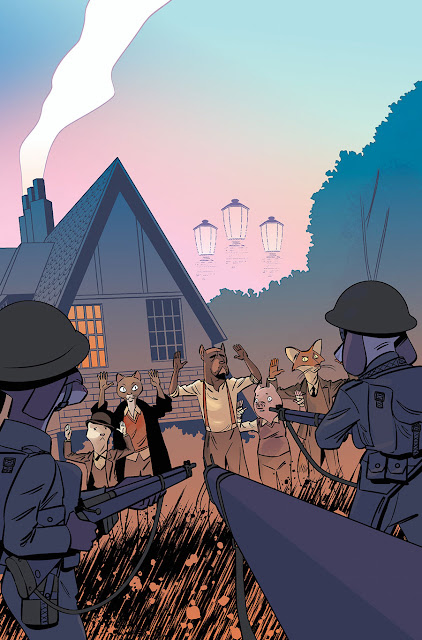 The collected trade paperback release of Ian Culbard's and Dan Abnett's Wild's End this September will coincide with the serilaisation of a new, six-issue miniseries, Wild's End: The Enemy Within. The first mini-series was a spin on HG Wells' sci-fi classic, The War of the Worlds -crossed with The Wind in the Willows. If you're wary of such referential mash-ups, I can assure you it was an excellent comic. Strong characterisation ensured Wild's End read smoothly in its own right, in that it didn't require a knowledge or familiarity with either source book for readers to be able to enjoy the story, and there weren't any facets that pulled you out of the experience. It also featured some absolutely spectacular work by artist Ian Culbard; in my opinion the best of his career: clear, bold beautiful lines, with superb colouring choices. If you missed the original run, I very much recommend picking up the trade on release.

Post alien invasion, The Enemy Within sees the military arrive in Lower Crowchurch to cover up the 'incident' and the deaths and destruction that resulted from it.  Meanwhile, Clive, Susan, Fawkes, and the other survivors are attempting to cope with what happened, but as town residents are detained, questioned, and treated with suspicion, it becomes unclear exactly what the military's intentions and purposes are. Are they alien spies, collaborators, sympathizers? The continuation of the story looks to play with the paranoia and 'the enemy amongst us' conspiracy theories prevalent in more contemporary science fiction, as Clive and the rest will need to escape imprisonment if they’re to get the word out and warn the rest of the world in case the aliens return.  Wild's End: The Enemy Within will begin publishing in September, with issue one offering variant covers by Jake Wyatt and Jeff Lemire (something I normally wouldn't care about, but I'm a big fan of Wyatt's work).