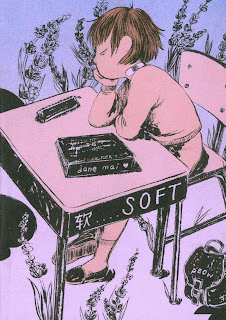 Jane Mai manages to do the seemingly impossible in Soft: make a vampire story creepy and relevant again, and in the most acute manner. A honed, modern re-imagining of  Joseph Sheridan Le Fanu's 1871 influential lesbian gothic novella, Carmilla, Soft brings to the fore the sexuality of Le Fanu's as a contemporary identity struggle, whilst interplaying the abusive power dynamics and symbolism of vampiric relationships to powerful effect.

Laura lives with her father in an apartment complex, also home to her best friend June. She's 15 and summer vacation is approaching, but June's got a summer job which leaves Laura at a bit of a loose end. An accident with her bike leads to her meeting Carmilla, a beautiful, long-haired girl, and they begin spending a lot of time together. Laura quickly becomes besotted even as she's mentally racking up all the odd things about her new girlfriend: she sleeps through the day and appears at night. she's lethargic and then suddenly energetic, she's unnaturally strong, 'There was something wrong with her, I knew. But I was drawn to her like a magnet.' While Carmilla becomes increasingly possessive and demanding, a spate of girls in town contract a mysterious illness and start dying...

Ostensibly, Soft serves as an examination of an abusive relationship. Laura, already cautious and with few friends due to her confusion and shame over being gay, is afraid to disclose that knowledge with anyone else (she's not even ready to really admit it to herself) out of fear of any negative reactions. It's a state that is readily exploited by Carmilla, who uses that knowledge to exert greater power over the person she purports to love. There's a tidy, prescient little moment where Laura's in her room, looking at sexy women magazines, and her Dad pops his head around the door to tell her he's bought home some egg tarts. Caught off guard, she quickly shoves the magazine under a pillow, 'I'll come out,' she says. The intensity of her relationship with Carmilla, and the way the latter manoeuvers and positions herself as the only person who understands and cares for Laura, leads to the her isolation as she pushes further away from anybody who expresses concern or doubt. Alone, she struggles to deal with Carmilla's need for constant declarations and proofs of love, her stalking and following her, hurting people close to her, and her physical violence. Laura's aware of Carmilla's nature and the situation of her relationship, but quells the moments of clarity and recognition because she loves and cares for her. In addition, Carmilla is only person who knows her for who she really is. Fundamentally, that's what everyone wants: to be seen and known and accepted for they we are. So she continues to overlook Carmilla's transgressions, making excuses for her, until things escalate to a point where she has to make a decision, or choose not to make one. 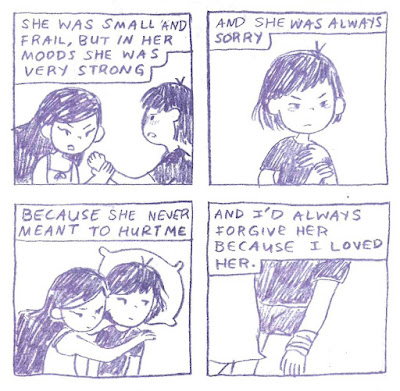 Mai draws parallels between the vampiric cycle of 'turning' a person to the cycle of abuse: the abused becoming the abuser. Carmilla is repeating the acts of the person she was once in love with; the way in which she was treated, and now wishes to turn Laura. There's a Frankenstein parable threaded in here- creating something seemingly borne from love and then twisting it to selfish purpose, and in doing so producing something monstrous. People are not things. They can't be owned. They don't belong to anyone. They can't be controlled. But they can be hurt in numerous ways. Even, and especially, through love, supposedly the best of all emotions. Mai is an intelligent writer and at no point does she negate the relationship, underlining its importance and significance to Laura, while contextualising, but not absolving Carmilla of her crimes.

The simple lines and textures of the style that Mai employs here straddles horror and romance- it's cute with an undercurrent; a swell that can turn at any moment. The epistolary teen diary entries gradually grow more sinister: after yet another visit to the nurse's office at school, Mai gives us a full page shoulder and head portrait of Laura: worn out, eyes small and tired, hand clasped to neck, smudges of blood dotted all over jumper and shirt. This is the first and only time in the book that we see blood, and the sudden insertion of it here while Laura's at school reinforces both her vulnerability and the horror of what is happening to her. That it is not particularly overt serves to invoke a greater chill.

Mai's storytelling is at an exemplary level here. She uses the familiarity of the traditional vampire story to guide the reader to new territories, although none of the themes she presents feel obtrusive or unorganic to the  symbolism and allegory of the vampire narrative. Keeping the focus tight and personal, on just these two people, helps build a growing tensions, as well as providing insight into Laura's emotions and mindset. Soft is Laura's story: her confusion, hopes, happiness, desires, fears. From a first love that helps her assert her sexual identity, she progresses to a place where she's able to make an autonomous decision about what's best -despite the hurt it may bring. The inclination to disregard as human or mythologise those who act in terrible ways robs them of their deliberate will and choice. Humanity can be beautiful: loving, forgiving, generous, but it can be equally as terrible, destructive, and appalling. One can exist alongside the other. The separation between man and monster is not a relevant dichotomy; man, capable of all things, is more than enough.

(clicking on images below should enlargen them) 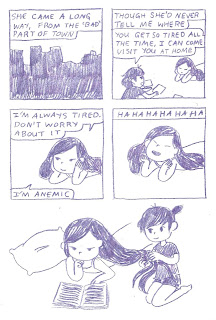 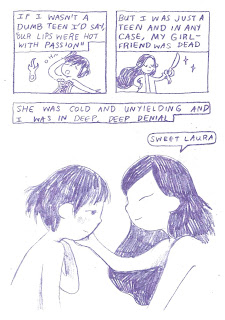