Book two of Last Man rattles along in pacy, entertaining fashion. Young Adrian and his new-to-town partner, the mysterious and brawny Richard Aldana continue to make their way through the fighting tournament, The Royal Cup, while the purpose and intent behind Aldana's presence remains murky. Is it just the money and reward he's after? It's clear he's hiding something- when his bag gets stolen he goes frantic with worry charging butt naked around the town in pursuit of the thief to no avail. Although the story began as Adrian's, it's increasingly Aldana who takes front and centre. With the tournament done and dusted, and having certainly made an impression in so short a time, he must  now decide whether to stay or move on.

The fight scenes are simply superb yet again. The drama, the dynamism, the storytelling- it's here where Vives' and Sanlaville's art really takes flight. Already loose and expressive, it seems uniquely suited to compressing and conveying action and the passage of time incredibly effectively, via a range of different panel layouts. The variety in layout and panel sizes: angled up, down, diagonally, here a figure placed in the foreground with a number of reaction panels behind him, a shattered mirror effect splash page with the shards acting as panels, and so forth, maintains the zippiness of the narrative which helps to really ramp up the intensity of the action. It reflects the non-stop onslaught of the tournament- one after another after another, and grips the reader's interest, whilst capturing little moments in between: the sliding of a foot, a tight panel of Aldana's mouth yelling encouragement, sudden doubt in an opponent's eyes, the gritting of teeth. Everything about the art is perfectly pitched in these books: detailed and intricate when required, simply effective at other times, emotionally resonant, and seemingly effortlessly executed- it's a joy to look at.

The relationship between Adrian and Aldana, of master and apprentice- whilst not new, is nicely done, providing the most substantial and engaging emotional core, where previously it was the circumstance of Adrian and his mother. The sudden manifestation of Adrian's summoning powers goes unresolved- perhaps a cheeky nod to the trope of the physically weak underling becoming magically adept at fighting after a training montage, with Sanlaville et al opting to skip the training montage all together. Or it could be a plot point that may be addressed later. The Royal Cup moves past the tournament, as Marianne (Adrian's mother) is brought further to the fore. Questions are presented about the world in which all this is happening: it seems an archaic, semi-magical place where the King and Queen dress in robes of old, but does it exist alongside the modern world, or has there been some form of time travel at play? Anyway, motorbikes are introduced, and Marianne appears to know more than she was letting on, and it's towards the third book we zoom. 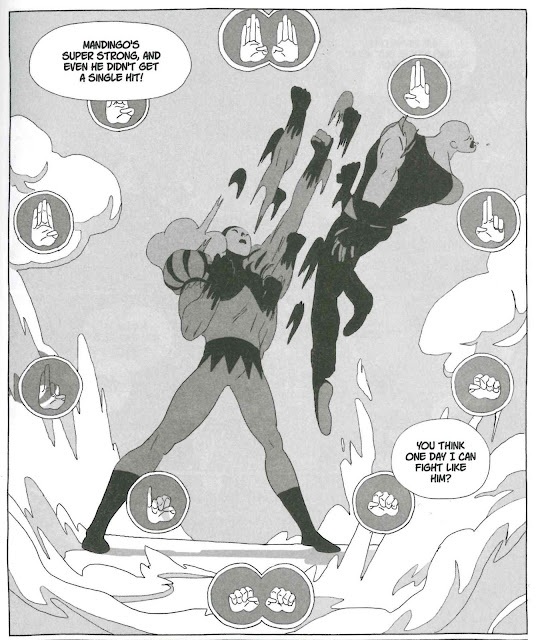 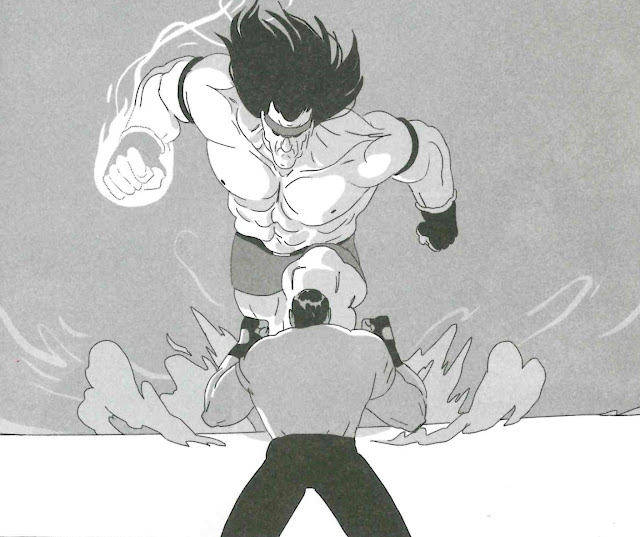 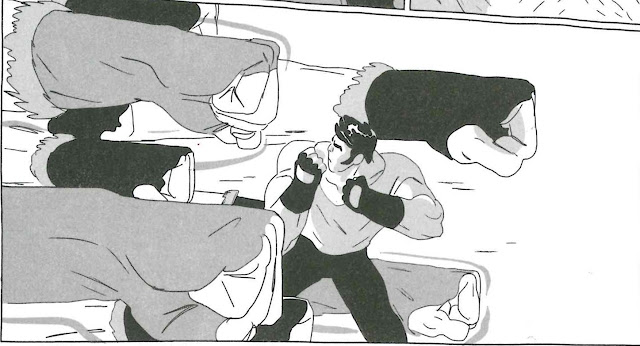 I enjoy Last Man a lot. Both the first and second volumes have simply been an immensely pleasing reading experience; it's a comic that is so good, so unified in writing and art that time slips by, the pages turn unnoticed, and before you know it- it's over. And then you want to read it one more time, to better pore over the lovely art. The only time I find myself jarringly pulled out of the text and pausing, is when it comes to the portrayal of women.

In my review of the first book I mentioned the lascivious nature of the down-Marianne's-dress and focus-on-her-bum panels- panels from Aldana's point of view. There's an argument that these are celebratory of the womanly form -sexualisation is by no means a negative thing- but objectification is. And when you cut off the rest of a woman's body for a tight shot of her cleavage (unbeknowst to her) and invite readers to side with Aldana's male gaze upon it, it feels pervy and exploitative. More so when you don't afford Marianne the agency and benefit of her gaze- after all, she too, finds him attractive (although in this book at least she does get her own eyeballing in). In The Royal Cup, that problem is taken to a whole other level.

There's a long scene where Aldana has to fight a character named Alyssa in the ring (along with Elorna, the only other woman shown to participate). They are fighting when they recognise one another as the person they happily spent one casual night with in the first book. Both are surprised. What happens next is really quite ridiculous. Alyssa goes absolutely wild, her eyes rolling back to white as she's overcome with lust, straddling Aldana and literally tearing her clothes off as she scream at him repeatedly to take her. She starts to tear his clothes off, and attempts to undo his belt, as a close up panel shows first her arse pertly astride Aldana, and then her putting her hand down the front of his trousers. She screeches like a banshee and sniffs him- unless I'm missing something very specific, as a non-gamer, it's difficult to take this as a satirical comment on the treatment of female characters in fighting games. She's simply pulled off him and carted away, not to be seen again.

Why does a strong, competent fighter suddenly start behaving in such a way? All I'm left with is that this is played for laughs; it's supposed to be funny. We're supposed to laugh at her, whilst condemning her behaviour: the crazed, sexually ravenous woman. We're offered to compare her bad sexuality vs the good sexuality of the sensuous and virtuous 'mother' Marianne. The implication is that once Aldana recognises her as the woman he bedded, he stops taking her seriously as an opponent. He's already 'conquered' her by having sex with her so now she's reduced and stripped of her strength as a fighter and becomes a vessel for the worst, negative stereotypes of femininity. Not only is it utterly devoid of humour, it's poor writing. Alyssa comes to the ring like so many before and after, why does she behave this way- no explanation, reason, or motivation is given. Why are we being shown this? What purpose does it serve? Is it setting something up for a future volume? As it is, the whole thing just seems utterly unnecessary: you could remove it and it would make no difference. It adds nothing. 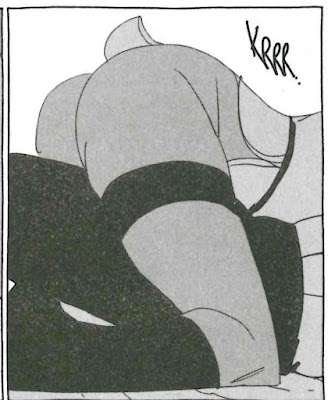 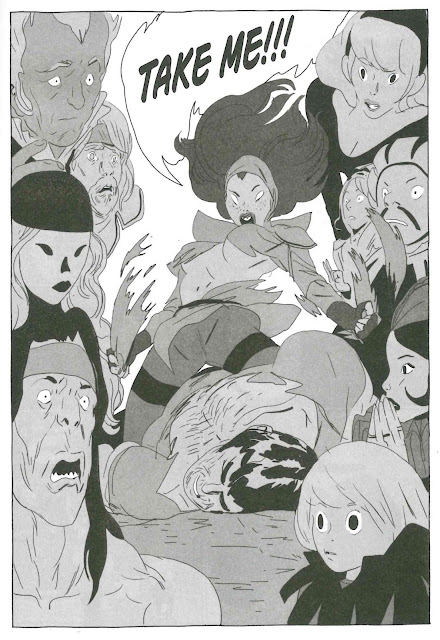 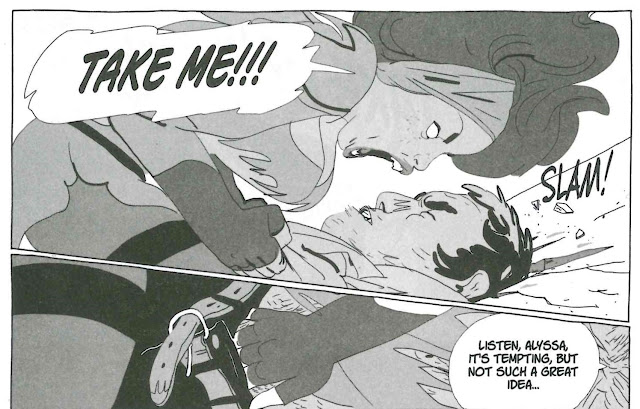 Even the thus-far adequate characterisation of Elorna, who refuses to fight and quits out of a mixture of revenge at Gregorio for being a dickhead, and compassion and sympathy for Adrian - neither of which are bad qualities or motivations- could potentially be misconstrued as weak and emotional due to existing in this landscape where the characterisiation of women is so poor. Marianne and Elorna's characters have potential, but Last Man's treatment of women and sex feels familiarly, patronisngly 'European,' or what is daubed as such: casual sexism decreed as a bit of fun, don't get your tighty whities in twist. All that's needed is a little more care and consideration in writing these women as wholler characters, not defined by one or two superficial traits and their interactions with men .

And the reason this gives me further pause is because to all intents and purposes, Last Man seems to be a series aimed at kids. It's (apparent) main protagonist is a child. A 9 year old could happily read it. But then not only does that 9 year old receive the propagation of afore-mentioned ideologies, but they also get to see Aldana having sex with Marianne up against a wall, her legs wrapped around him, and then later in an extended sex scene in bed. It's tough to gauge when and how kids should be exposed to this- perhaps this is as good way as any? I guess that's something for parents and children to gauge and negotiate, but I find it confusing because the book seems to swing from being very young and kid-friendly to those graphic scenes; it seems unsure of its audience. Exacerbating this uneven reading is a narration presumably aiming for omniscience. What ostensibly begins as 10 year old Adrian's story now sees him as essentially a side character, and the manner in which point of view shifts from person to person offers varying degrees of success for each character.

Hugely enjoyable still, and beautifully drawn, but with increasingly disappointing elements.
Posted by Zainab at 22:55