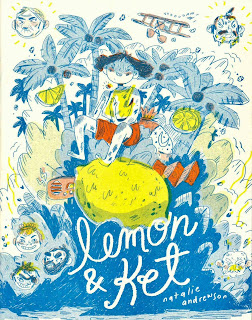 It was always gong to be difficult for me not to like a comic that promises 'Fists! Fruit! Fury!' in an azure blue bubble on the back cover. I've been a fan of Andrewson's since coming across that fantastic spread she did for Nobrow's Oh So Quiet anthology issue. Her work has an innate quality of fluidity and fun, a dynamic flurry that sweeps up the reader along with the story. As her longest book to date, the allure of Lemon & Ket is being able to experience the irresistible charm of that expressive style in full.

Ket appears to be a young girl - although the young is unclear; she my well be over 100 years old and seems to be a founder of the island which she calls home. The island is a special place, in particular Bluffbay where Ket lives: it's soil has special and much coveted properties which Ket and the islanders benefit from, and are careful to use in the right way whilst protecting it from exploitation. That situation is under threat, as a group of quivering, unnaturally muscle-packed out-of-towners arrive, intent on stealing away with them as much of the soil as possible. Ket tries to fight them, but they're too strong, so she journeys into the forest to reflect upon a course of action and get beefed up herself. Cue the obligatory 'become stronger in body and mind' montage': climbing, swimming, lifting rocks (it's unclear whether this is actually having an effect!), coupled with a visitation from a mysterious and wise sage, who divulges that the soil may not be the only specially-powered thing on the island...

Andrewson lends the superficial light-heartedness of her adventure verisimilitude with an interwoven narrative of respecting the earth and the resources it provides; being grateful for what it gives, the maintenance of a balance between nature and people, and the dangers of that balance being pushed and tilted by man. Of becoming engorged and corrupted by its power to the point of delusion. The subversion of taking the noble route/high road in order to defeat the enemy, instead opting to adopt his methods and leaving the outcome of that open-ended is an interesting one, too. More than anything, though, it's a joy to see the kaleidoscope of expressions Andrewson teases out from Ket: hot angry eyebrows, tight-haired frustration, bedraggled fed-upness, toothy joy; cartoonish extremity amalgamated with very real feeling. I like that Ket can be all these things- a definite person, immediately picked out by her fluorescent orange shorts, with a definite purpose, and yet remain somewhat of a mystery, too. A micro-thin line means Andrewson's signature loose dynamism, sketchy zing, and quick texture leaves you with lots to look at without ever being overwhelming. The movement and suggestion she's able to infer and manipulate from her lines is the marker of a fine cartoonist. The blue/orange/yellow riso doesn't scan that clearly, so you'll have to trust me when I assure you it looks appropriately lovely and fresh (I have darkened the colours/exposure here in order to make pages more discernible).

There's often a dismissive attitude towards things that are inherently enjoyable and fun -particularly those that are overtly so in terms of aesthetic and style- in which they're perceived of less significance and import because they don't necessarily discuss 'serious' subjects; the notion that art is only -or more- relevant when it is talking about specific ideas connected to the exploration of 'weighty' issues, or charting zeitgeisty parallels. But art that has the ability to impart a little joy, to carry a person within its pages and immerse them in enjoyment, and warmth and charm; to create something that's able to do that is, to me, immensely worthwhile. I'm not sure why it's perceived as reductive, or less true, and I think it's telling, as a society, the things on which we choose to place value and where that leads.

My affinity for summer island adventure tales is assured, thanks to a childhood of Tintin and Enid Blyton, and with heady palm-tree environment, mystery aeroplanes, super-powered soil, giant magic fruit, secret plans, Lemon & Ket sits alongside the best of them. 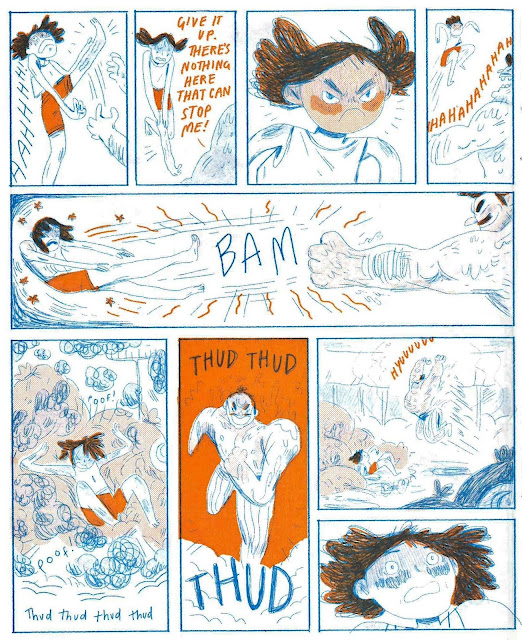 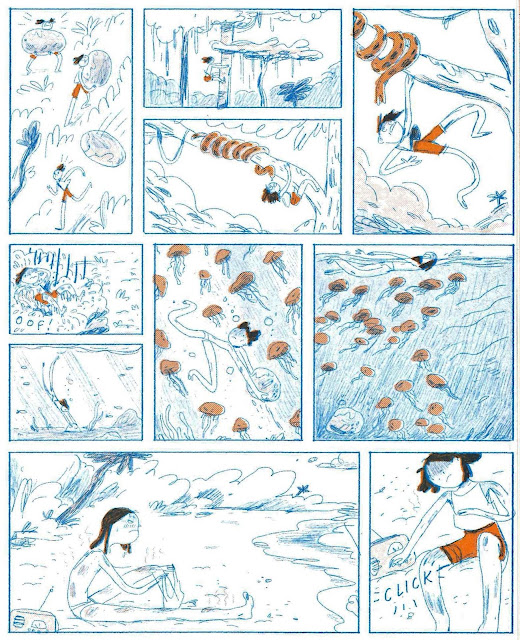 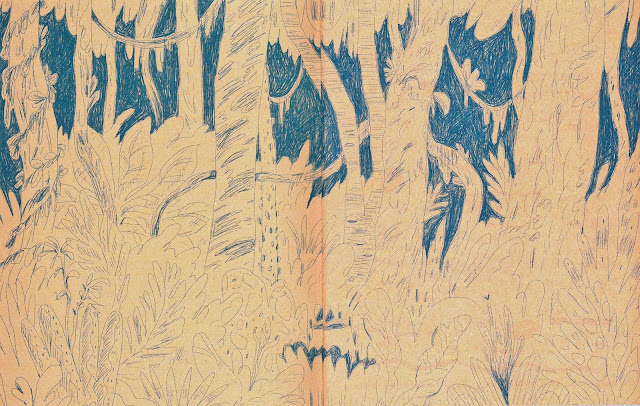