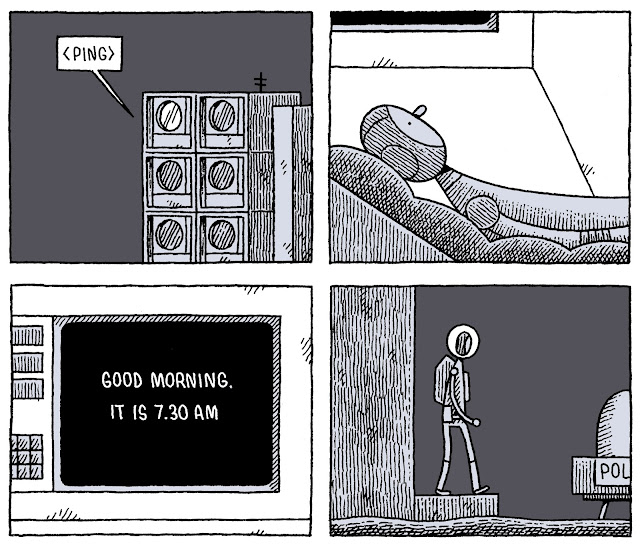 In very exciting news, next year will see a new long-form work from Tom Gauld, his first since Goliath in 2012. Gauld released a collection of his weekly Guardian comic strips, You're All Just Jealous of My Jetpack, in 2013, and since then has continued producing cartoons for the newspaper, in addition to illustration work for publications such as the New Yorker. Probably his most recently published comic work is his 8-page contribution to Drawn & Quarterly's 25th anniversary tome, for which he also designed and illustrated the cover, spine and endpapers. His new, upcoming book, Mooncop, the story of a dutiful policeman patrolling his sector on a colonised moon -complete with a daily stop at Lunar Donuts-, will be published by Drawn & Quarterly in 2016. Naturally, something goes awry, no doubt in typical heightened minimal and deadpan fashion.

Gauld is one of those cartoonists who goes about producing consistently strong, unshowy work in his own particular style. I really recommend the perusal of his website and Tumblr (the latter is mostly a home for his Guardian strips)  for a glimpse into what a quality cartoonist he is. Meanwhile, here's D&Q editor Tom Devlin on what he thinks makes Gauld special: 'Tom Gauld is a singular voice. His characters are all low-key citizens who are just waking up to the fact that everything around them is not working as hoped. They meet this disappointment with resignation rather than dread which is what makes every Gauld comic surprisingly moving AND funny. His comics are beautiful solid structures designed to stand the test of time--unlike every house, castle, robot, and computer in those same comics.'
Posted by Zainab at 09:56