New, ninth volume of Kramers Ergot to be published by Fantagraphics 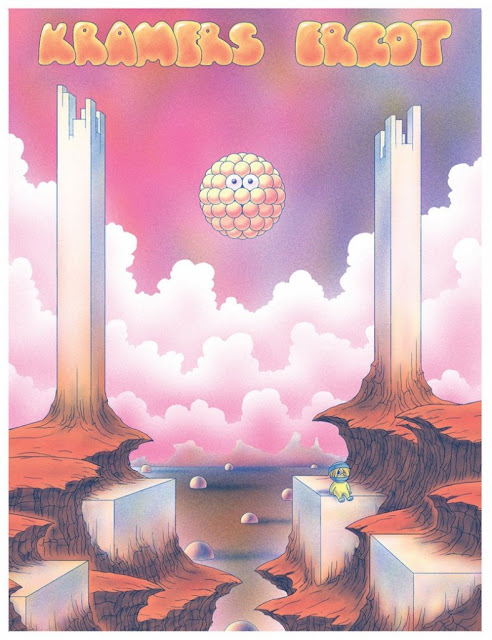 It looks like Fantagraphics will be publishing a new, ninth volume of alternative comics anthology, Kramers Ergot, in March next year. Kramers Ergot began life as a self-published mini-comic by Sammy Harkham and evolved into an acclaimed anthology series which included contributions from artists such as Renee French, Anders Nilsen, Marc Bell, Chris Ware, Jordan Crane, Gabrielle Bell, Ron Regé, and more. It reached a zenith in 2008, with the publication of volume 7, an over-sized 16 x 21-inch hardcover which has since attained a somewhat mythological status, and contained work from Ivan Brunetti,  Blexbolex, Dan Clowes, Tom Gauld, Matt Groening, Jaime Hernandez, Kevin Huizenga John Pham, Florent Ruppert et Jérôme Mulot, Seth,  Josh Simmons, Adrian Tomine, and others. In 2012, PictureBox published an eighth volume (4 and 5 were published by Gingko Press, while 6 and 7 were published by Buenaventura Press), and since PictureBox's closure, it's rather fitting that Kramers Ergot now seems to have found a home at Fantagraphics, who have a long association with alternative and underground comics.

The landscape of comics has shifted so much over the past decade, that it's almost odd to see an alt comics anthology (of presumably all new work) being released- comics anthologies of any persuasion seem to be filtering out. But Kramers established itself as  an arbiter of high quality, individual work, particularly with volumes 5, 6, and 7, so it'll be interesting to take in this new volume after 8 wasn't as well received (even within the context of it having to follow up 7). Promising 'powerful and impulsive cartooning of the highest caliber still exists in the short form,' the projected release date for Karmers Ergot 9 is March 18th 2016, and it will be an over-sized, 250-page full colour book, with that super cover by John Pham (pictured above).  It will carry comics and illustrations by Michael DeForge, Noel Freibert, Steve Weissman, Anya Davidson, Stefan Marx, Abraham Diaz, Leon Sadler, Julia Gfrörer, Adam Buttrick, Kim Deitch, Ben Jones, Andy Burkholder, Antony Huchette, Trevor Alixopulos, Antoine Cossé, Archer Prewitt, Kevin Huizenga, Renée French and others yet to be announced.
Posted by Zainab at 11:24