Snapshot thoughts on comics sfx: Quitely does it

My nephew Abu spent last weekend at out house, and come bedtime on Saturday evening, he requested Batman and Robin: Batman Reborn as a night read. He likes it mainly for the fight between the lady in the pink dress and Robin (also the bazooka). We don't *read* read this; Abu is 5, so he'll turn to the pages/passages he likes the look of, and I'll make up a little story around whatever's going on. Going through it again reminded me I wanted to talk about Frank Quitely's use of sfx in the book.

What makes the sfx in Batman and Robin ingenious is that they're not independently floating letters or text (although there is some of that, too); Quitely uses and manipulates the environment, situation, and objects to manifest and visualise sound to greater impact. They're integrated within the art and created from elements that would already exist and be drawn/pictured, so they become naturalised to some degree. This results in Quitely giving us spidery cracks in a wall against which Robin's been thrown spelling out 'SMASH.' Blood from gunshots squelches out 'BANG BANG.' The smoke from a bazooka blows an inventive 'SSSPF.' Batman crashes through someone's window; glass, plates, some water, maybe even a knife and fork, spell out a sharp, tinkling 'CRASH.' 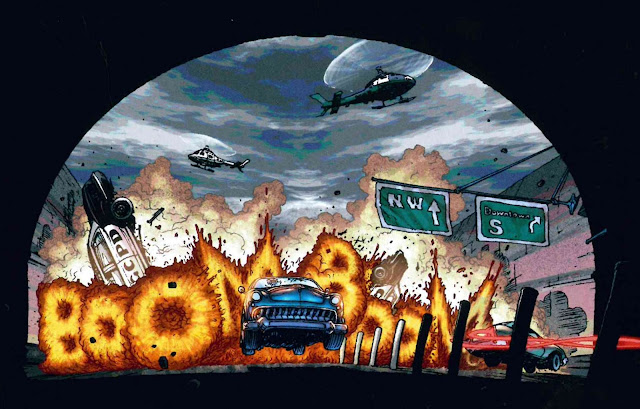 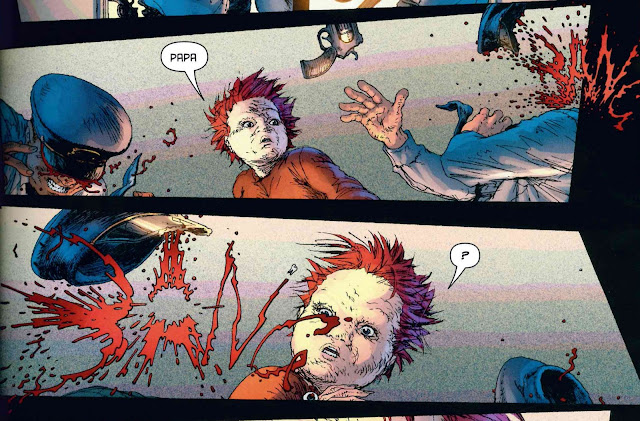 I've capitalised all those sounds, but part of Quitely excellence is that the way he illustrates the sfx gives you an indication of decibels- not only noise level, but the way it sounds. Batman crashing through though those plates, for example- crockery breaking sounds a very particular way. Similarly, having rising water spell out 'SPLSH' as a car lands in a river immediately leads your brain to the sound of water, or something hitting the water. You can't draw sound, but you can draw the object/s which creates the sound, and drawing sfx as part of that object, as an organic extension, allows associations to be made faster, making  the sound more tangible, more instant. Instead of looking at a a fired missile trailing fire and smoke and then looking at a block of text reading 'BWKSSSSHHHH,' you can simply have the trailing fire and smoke moulded to spell out 'BWKSSSSHHHH.' It removes the pause, the separation and distance, and brings the sound and the object together for a much better, visually onomatopoeic experience.

Quitely's carefully chosen what aspect to animate into sfx in order to convey the best sound without it taking the reader away from the narrative. But while it's not always possible (depending on the tone of the book), colour and shape, and some imagination can produce similar effects. In Godzilla: the Half Century War, James Stokoe uses gradiented palette of oranges, pinks, and reds combined with a fuzzy sharp edge and crescendo-ing shape to illustrate the letters of Godzilla's roar. The letters aren't wholly discernible, but the heat and size and static and the uniqueness of it reverberates to create a sense of the sound inside your head. 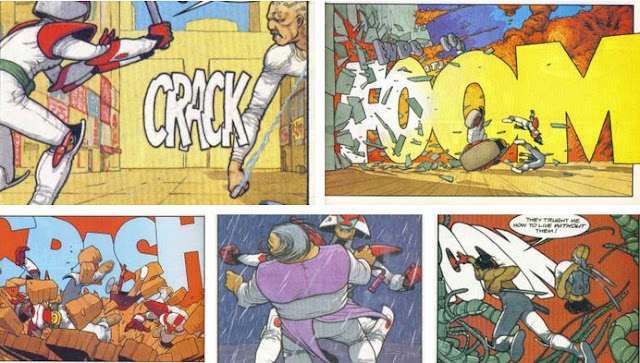 Quitely's use of sfx has been evolving for a while; it obviously helps that he's the artist and thus able to experiment and play around with it. In Shimura (above), for example, you can see he was working with the placing of sfx: it moves from foreground to background, right to left, often following the direction of movement and sound. The 'CRACK' in the panel above is placed against the man's striking arm, and also has an actual crack splitting it. That yellow blocked 'FOOM' looks great bursting out of that wall; I actually think the definition and outline of the letters works better to provide a sense of force and hard impact, where fiery, smoky letters might not have the same edge. The smaller letters are a physical object: the name of the company mounted on the front of the building, but perhaps signify the approach he was to take later in Batman.

To an extent  the sfx here are still obtrusive: letters/font placed in the comic specifically taking up space, but they're well-considered and generally very effective in a different way. Quitely does enough with them to make the reader look (how often do you just skim over sfx) and lift them beyond boring territory. The clean aesthetic of his letters have a very Domu/Katsuhiro Otomo feel- but that's only because I read Otomo in English, where the lettering and sfx were largely done by Studio Proteus (a Japanese import, translation and lettering company). The sfx in Domu sees letters contort and get shaky and juddery; leaning this way and that, overall imbuing them with a bit more life. They look good. One of the things that kept Domu's and Akira's sfx fresh for me was the simple difference in the phonetics: that 'BKROOM' below would have been just 'BOOM' in an American comic. The 'tok tok' and 'poot poot' and so on were different enough to get me paying attention to them.

There's certainly room for both kinds of sfx in comics, but the strongest feeling is that we really should have moved past lazy, uninteresting, generic blocks of letters at this stage. Quitely's elemental incorporation of sfx not only looks good, but makes for better experience. It imbues individuality and personality to a work, while also pulling together the comic as more unified and streamlined text. The integrated sfx are more like something that's part of a cohesive, organic comics language, while blocked letters seem to have greater visual impact when used in conjunction with applications of color, shape, contouring. placing, and so forth. 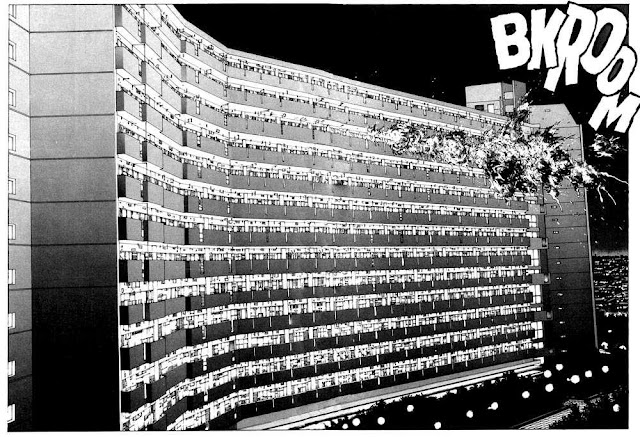 Here are the rest of the examples of integrated sfx (that I could find) from Quitely's Batman and Robin run: