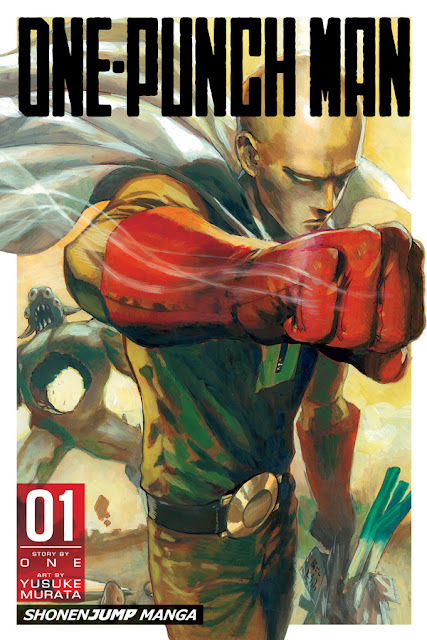 Viz announced some incredibly exciting news last Friday (just as I was done with writing for the week): they'll be publishing print editions of Yusuke Murata and ONE's hit online and digital manga, One-Punch Man. Volumes 1 and 2 of the hugely popular 'action-comedy' manga are both slated for a September 2015 release, with future print volumes to be published in English on a bimonthly basis under Viz's Shonen Jump imprint. One-Punch Man began life as a web comic, created by writer ONE, quickly going viral as it garnered over 10 million hits, before Viz acquired a revamped version to serialise digitally in Shonen Jump.

I'm going to give you some of the official press low-down on the 'manga series about a superhero who just needs a villain strong enough to take him on,' because Viz are one of the few companies who actually do that well, before telling you why I'm personally really looking forward to this and think you should be, too. Here's the publisher's blurb:

'In One-Punch Man, nothing about Saitama passes the eyeball test when it comes to superheroes, from his lifeless expression to his bald head to his unimpressive physique. However, this average-looking guy has a not-so-average problem – he just can’t seem to find an opponent strong enough to take on! Every time a promising villain appears, he beats the snot out of ’em with one punch! Can Saitama finally find an opponent who can go toe-to-toe with him and give his life some meaning? Or is he doomed to a life of super-powered boredom?'

Now, there's a few reasons I'm excited about this: 1) I'm curious about it because it's been a series I've heard a lot of positive chatter about online, but since I don't read digital comics haven't been able to check out. 2) I saw this image/spread from it about a year ago, which really caught my attention (dramatic confrontations in the rain + monsters = I'm down): 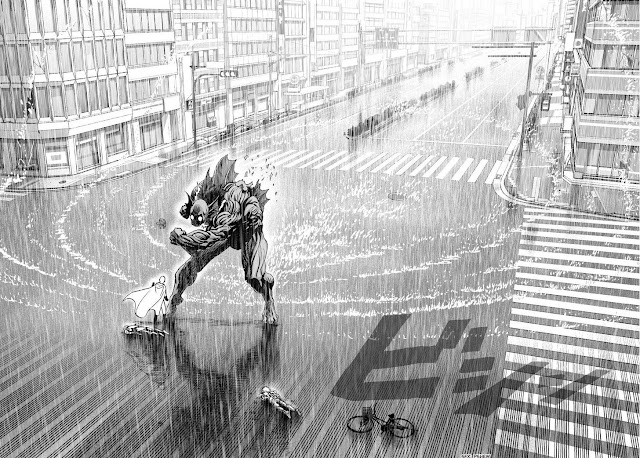 And saving the most important for last: it comes highly recommended by David Brothers. For the past couple of years, I've been doing an end-of-year round-up on the blog where I ask various comics folk to write about one comic that stood out for them in the year gone by, and in 2013, David chose to wrote about One-Punch Man. I actually first read Katushiro Otomo's Domu and Naoki Urasawa's Pluto series solely on the basis of David's writing -and those went on to become two of my most beloved comics, so I trust his opinion on manga. I think his words will most likely serve as the best introduction and analysis you're going to read (and more informative and eloquent than I could hope to articulate) if you're new to One-Punch Man, and it's non-spoilery, so I've reproduced them in full below:


'A slacker born and bred, Saitama wants to be a hero, so he does what heroes do: he trains. He trains so hard his hair falls out and he becomes functionally invincible. He trained too much, you see, and now he's too strong. He can end any fight in one punch, and he shrugs off blows—occasionally literally—that would pulverize bone and level buildings. He is the ultimate superhero, the codename-less star of ONE and Yusuke Murata's One-Punch Man, a comic occasionally serialized in Viz's Weekly Shonen Jump, and a dedicated slacker when it comes to everything but heroism. He eats ramen noodles by the light of his TV and shatters extinction-level events in his off-time.

Yusuke Murata cut his teeth on Eyeshield 21, a football comic, but the work he's doing here is as good as any superhero artist you'd care to name. The battles have an intense sense of motion and scale, Murata designs characters who look simultaneously ridiculous and tonally appropriate for career heroes, and you're never more than a page turn away from a sequence that's so perfectly pitched and paced it feels more like animation than sequential art.

Murata's art hooks you, but the way it works in concert with ONE's plots is what's killer. One-Punch Man isn't deconstruction, like Frank Miller's Dark Knight Returns. It's not interested in exploding our idea of a hero. It's not reconstruction, like Miller's Dark Knight Strikes Again, either. Murata and ONE have no interest in rebuilding how heroes work for a new era. No, One-Punch Man is something different. It's conscious of the trappings, tropes, and history of cape comics without being beholden to it. It wholeheartedly embraces what makes superheroes so attractive and vital, the simplicity and violence and honor and glory, and throws a slacker hero like Saitama into the mix to freshen things up. You know how the conflicts are going to end, just like in every cape comic ever, but the fun comes from the torturous, frank, and self-aware approach to action. Murata and ONE delay the gratification that comes from seeing that one punch again and again, creating a feverish mix of melodrama and humor so intense that by the time the last page of the story arrives, your face hurts from smiling and your heart's two sizes bigger. 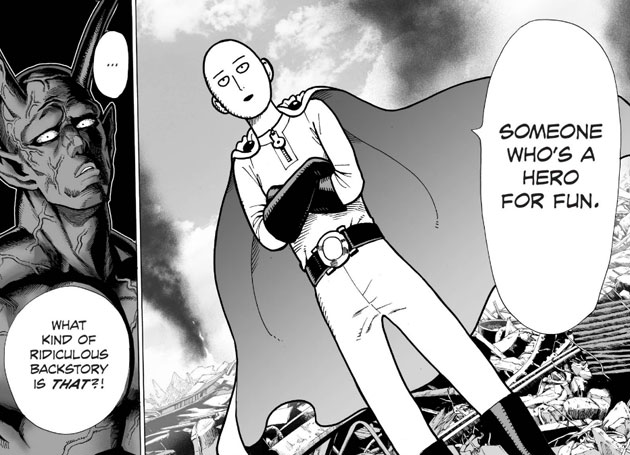