A Body Made of Seeing by Sloane: the assembly of self [review]

A Body Made of Seeing by Sloane: A disclaimer of sorts before I begin: I feel an inadequacy in discussing Sloane's work, but I would like to attempt to because it's worthwhile and very good, and those descriptors don't only apply to texts with meanings that are readily accessible. So while I may not understand or get this fully,  I appreciate the complexity and challenge it offers, and perhaps here I can clumsily convey some of what I gleaned.

One of the main, striking things about A Body Made of Seeing is its themes of deconstruction and self-assembly. It's about the struggle for identity- largely gender identity, and the tumultuous mindscape of a person navigating a process of realisation, change, and acceptance. Taking apart and then putting together to assert control: control over your body, your mind, your narrative. Rarely is a full person or body depicted (if one is, they are faceless or featureless, or with their back presented to the reader); instead body parts are portrayed as alien and separate, dismembered, stretched beyond recognition, piled on top of one another, guts hanging in air. There's an inadequacy of the physical to represent or manifest what is felt; moulting and shifting in an act of becoming but being very much tied to the corporeal. Flesh twists and bends, skin melts, scales and old identities are shed as transformation slowly, painfully occurs.

The similarly staccato narration is excruciatingly eked out. At times it reads on-the-nose precious, but overall, the constant, swarming barrage of questions and emotions effectively combine with the art to illustrate a mental sense of confusion, being overwhelmed. It's a testament to the power of Sloane's work that these solitary jagged thoughts sets off the synapses of your own floating, dark debris, exacerbating them into thrumming life. The protagonist considers the being of women: women moudled in sculpture, women in horror films, women cyborgs, women dissected, displayed, fractured- 'all in pieces.' This feeling of being in pieces is something the protagonist seems to relate to. People never allowed to be whole; defined by parts chosen for you. The possibility of turning that on its head and deciding who you are.  Gendered usage of pink and blue is ignored, with the colours instead brought together to complement and work with one another.

But even that doesn't necessarily bring peace or acceptance. Shapes change from sharp and harmful to round, soft and amenable, yet the body is a poor vessel for the uncontainable. In a manner it s constraints mirror peoples/social perceptions and constructs, their fear, rejection, and ostracising. It's an ongoing battle to unlearn the ways you've been taught and conditioned to see yourself, and behaving within the realms of that accordance; finding means to deal with those structures on a personal level on a day-to-day basis. Being, existing in any form isn't easy.

Paradoxically, I think the very open to interpretation quality of A Body Made of Seeing requires a greater discourse with the reader, one that helps to focus attention and bring together the schisms of Sloane's work to make it a more rewarding experience. 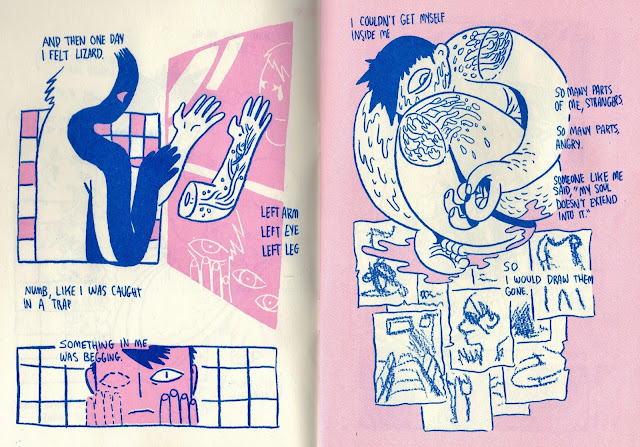 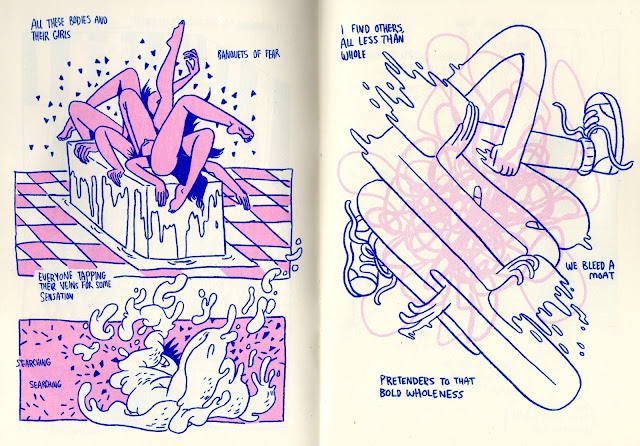