A comic, and a cola: Fridays are made of this 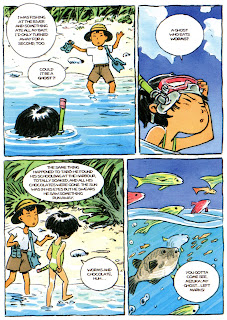 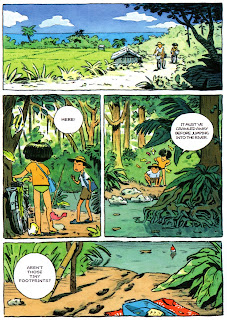 Something easy, breezy, and at once momentous for your Friday: a brief discussion of the delightful Coral Cave comic from artists Cecile Brun and Olivier Pichard, aka Atelier Sentô, before the blog's very first cola review. And if I may say so, I can't really think of a more suitable thing to do on a Friday than taking a moment to sit back with a good comic and a glass of cola with lemon and ice (no, the weather doesn't factor into this). To matters at hand, then: when I ordered The Coral Cave: An Irabucha's Dream, I noted that each comic ordered would contain an original watercolour sketch, and the due really didn't scrimp on that, with a full individual painting on the inside of each book cover, making it very special indeed. It couldn't have been an easy task either: time intensive and laborious; I saw on their Facebook page the amount of orders they'd received and how hard at work they were, but definitely the kind of thing that endears you to readers.

An Irabucha's Dream is set in the universe of The Coral Cave, a handmade, watercolour-painted point and click adventure game created by Brun and Pichard, though this story is a stand alone. Mizuka is busy snorkelling when her friend Masao comes to find her. Reports abound of a 'ghost' creature stealing food -chocolate and worms!- and playing tricks, so Masao brings the problem to Mizuka, to share and discuss, but also because she's smart and determined and capable of investigating further and gleaning truth, and she responds to the task with adroit application. It reminds me quite a bit of R Kikuo Johnson's The Shark King (Toon Books), for it's cultural folk myth related to and of creatures of the sea, and its similarly delightfully illustrated and vibrantly coloured. Setting and environment help establish tone and atmosphere in any story, but here (as in The Shark King), the place, the background, the beauty and magic of it, combined with the precocious assertions of childhood, is central in acting as as a facilitator for events that occur. The warmth and appeal of the watercolours really aids that goal (clicking on the page images above will enlarge them).

It's a charming little  folk-tale comic, with an ending that is quite beautiful and surreal in an unexpected way, and in Mizuka, Brun and Prichard have a characterful and engaging heroine, who I'd be happy to see more of. The only minor issue I had with this is the lettering. It seems to be a digital, rounded standardised font, which isn't horrible, but stands out more when it's apparent that such care has been taken in all other areas of production. 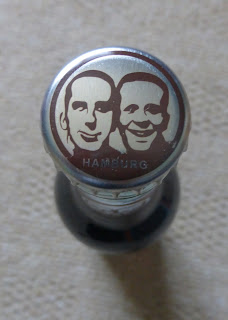 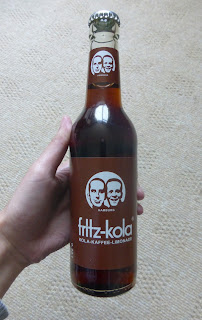 Moving onto historical happenstance now, my fellow writer-about-comics friend, Oliver Ristau kindly sent me a cola and coffee flavoured drink all the way from Germany to try out, post a Twitter conversation discussing the merits of various soda beverages. The general packaging and branding/appearance of this is as far away as the aesthetic of The Coral Cave that you could imagine: brown. It's a curious choice. I understand cola is brown, as too, is coffee, but combined with the logo and font and colour it takes on distinctly Orwellian undertones. It's the kind of drink and logo that you'd read about in a harsh dystopian novel written in the 1940's in which the dictatorial regime tries to convince people they know best and things are in fact okay, but our willfully deviant  protagonist knows better than to trust anyone who makes anything so brown -so BROWN- especially cola. That T.J. Eckleburg-esqe logo purports to show the likenesses of Mirco and Lorenz, founders of the Frittz Cola company (a rigidly hipster affair,  judging from the website). I have an intense dislike for all things coffee flavoured- cake, chocolate, coffee- but maybe, I thought, my love for cola would triumph here. I like that it comes in a glass, beer-like bottle which is good; cola out of glass bottles just tastes better- it's science. Original Frittz cola is flavoured (high caffeine count) like regular cola, this coffee iteration is a later development. Anyhow, it arrived, I popped it in the fridge for a couple of days and hoped that Oliver's deft packaging and the secure bottle top closing would be enough for it to retain its fizziness.

I think I hated it. It's later now that I'm writing this, and although I took some notes, I'm sure my brain has been hard at work attempting to erase all memory and associated senses of my drinking it forever. I thought it smelt nice, as long as I didn't smell it for too long. At first go, I didn't hate how it tasted. Which is a big deal because I abhor coffee as a flavour. The cola masks that to a degree initially, making it bearable and different, and I thought I might like it, but the taste sticks and gets stronger the more you drink, and by the time I'd imbibed down til the top of the label, I couldn't drink anymore. And then I did drink a little more, just to see if anything had changed. It hadn't. I still really, really sort of hated it. On a positive note, it does have a nice fizz level where you can't hear it popping off a mad symphony, a la Irn Bru, nor is it hugely foamy and up-your-nose alive like Pepsi, but it instigates little reassuring burps without being overwhelmingly acidic. But no, I would never ever drink it again. Ever.
Posted by Zainab at 11:00