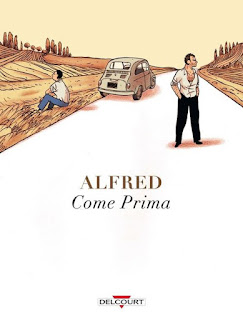 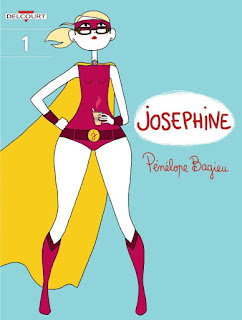 Some news I've been watching with interest is French comics publisher Delcourt signing a deal with leading digital comics platform, comixology, to being their comics to the English-language market. Delcourt, the largest independent graphic novel publisher in France, have been offering French-language comics on comixology since 2013, but this new venture will see a range of select French comics translated into English as part of a digital-first line. The move will involve the publication of over 150 titles over the next 12 months, beginning with the following 6 books:

Whilst Alfred's graphic novel Coma Prima has been released in full, the other titles will be split into 23-page installments to mirror the American serialised comic format. It's a model that will be repeated going forward: each month will see the publication of a complete graphic novel and installments of 6 or so ongoing monthly titles. When a title comes to and end, a new batch will begin serialisation, and so forth. In an interview with Brigid Alverson on Comic Book Resources, Guy Delcourt discussed the decisions and process in selecting titles that they think will appeal to American audiences, 'We concentrated on two lines, one more like entertainment, science fiction, thrillers, fantasy, etc. -- we have an abundance of those -- and on the other side, graphic novels aimed at a mature audience. We were able to correspond to the way U.S. publishers present their books by splitting every 48-page album into two comics of 23 pages, so it is more compatible with the way Americans read.'

Delcourt also talked about print Euro translations traditionally struggling to find a foothold in the North American market due to the differences in format, and how digital overcomes that barrier:

'The market share of digital comics in the U.S. is much bigger than France, and I think it has always been difficult for print comics coming from France to the U.S. to reach an audience because of the format. It's not a comic-size format, it's album size, so in comic shops it has been difficult for these comics to be visible, because they didn't fit into the racks. There are probably other reasons, but the first reason is that. Digital allows us to go beyond that problem because on an iPad you cannot really see the format difference, or at least it is not as visible. It makes the difference much smaller. I think it gives the comics a better chance of being read, because in terms of style, of stories, of artwork, a lot of these comics match the tastes of the U.S. public. I'm not saying all of them will reach a big audience, but I see a chance.'

I'll always prefer reading in print, not only as someone who wants to keep screen-time to a minimum due to being shortsighted and suffering from migraines, but because I think comics and art, in particular is supposed to be experienced that way -or is better experienced that way, though there's the argument that the whole point of digital comics is evolution. Regardless of personal preference, this seems like an obvious and natural move in the way that smart decisions often do. The digital comics market is accessible and fast growing, so it's potential ability to reach new audiences beyond those that are already invested in European comics seems like the way to go. Not only is digital cheaper than print for both publisher and reader on a book-to-book basis, Delcourt going direct with comixology allows them the reach of comixology's widely established brand, to retain control over their properties, whilst leaving with them with the option to take to print any titles that prove popular. In the extreme positive long-term, an establishment of familiarity with readers could even help with awareness and marketing of print editions. It'll be interesting to see how it pans out, but for readers right now, it's definitely a good thing. For a bit of further information, Tom Spurgeon also conducted an interview with Guy Delcourt, which is a quick and salient read.