Image Expo announcements: what to look forward to

I've been thinking a bit over Chris Butcher's piece (very much worth reading) on comics increasing focus on future releases and what's coming out in 3 months, in 6 months, next year- he's talking about it largely in relation to the serialised model, and the way previews are setup, and the subsequent impact on readership, retail, and beyond. For the most part, I cover comics that mostly follow the book publishing model or is self-published, so if there's an announcement of a new book coming out next year by Christophe Blain, for example, I'll write about it because I'd be madly excited about that news and want to share it with readers who may likewise care and be interested. It raises awareness and anticipation, but I've never quite grasped the ins and outs of comics publishing, so I'm not sure how it benefits the publisher exactly, or how impactful such advance (and I'm not just talking about Image) notices is for readers; I'd think people get excited, then forget, then need reminding again closer to release- which is kind of what Chris Butcher's piece is about- you should really just go read that- he actually knows what he's talking about!

From a coverage perspective, the shortness of  the 'news cycle' is something I frequently mull over: in that a book comes out, is either reviewed/discussed or not and that's that done, everybody moves on to the next thing. How do you get a books presence felt for longer in the consciousness? I'm not sure that's really a task for people writing about comics, but perhaps this advance, staggered marketing is an attempt at doing that. It's made even more difficult today, because visibility is linked directly to the sheer volume of comics now available; there's simply so many books vying for attention - and these are all good to excellent books. So the difference between a book getting attention and standing out can often be PR: how well it's marketed.

Which is kind of one of the main objectives of the Image Expos, as the majority of the titles announced aren't even close to seeing an impending release. It gives people an early heads up on what to get look forward to, and reinforces the brand. So while none of the comics below have any projected release dates, these are the few titles from last week's Image Expo that caught my attention. 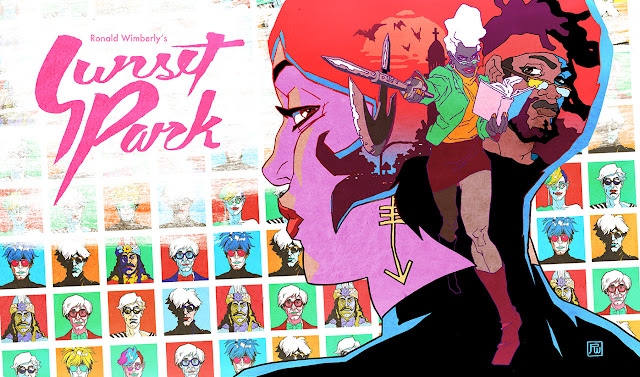 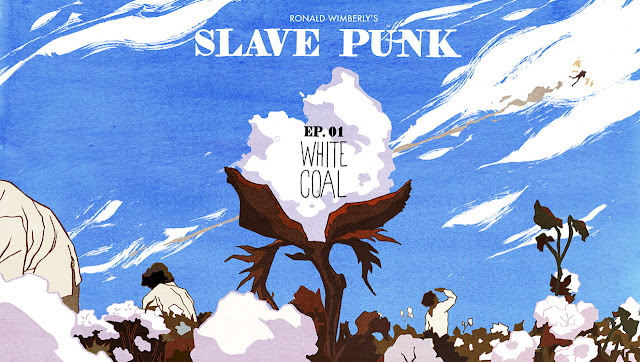 Sunset Park, and Slave Punk by Ronald Wimberly: I'm not sure how anyone can look at these two stunning title-card images by Wimberly and not have their interest piqued. I'm just so thrilled that we'll get to see more of Wimberly's unique dynamic art in the form of ongoing print comics; it baffles me that his work isn't on the shelves. Anyway, here's the official solicit for Sunset Park: 'Something’s up in Sunset Park, and it ain’t just the rent. Are Brooklyn’s gentrifiers more than just economic vampires? A cartoonist draws a macabre story from a collection of notes, journals, movies and other ephemera he finds boxed, abandoned in the studio he’s recently rented along the latest frontline in gentrification’s relentless march over Brooklyn in Sunset Park. Among the boxed items are what could be a copy of an old Warhol vampire film and what looks to be a journal belonging to Jean Michel Basquiat.'

Slave Punk: White Coal is set in the mid 19th century and tells the story of Malachi, a genius, inventor slave who defied the powerful King Cotton and ignited the Civil War in an attempt to end slavery. It sounds like Wimberly's planning for this to be a shared universe of sorts in which he sets and tells various stories, while Sunset Park will be a limited series. It'll be released in or after late 2016, after Sunset Park has been completed. (via Paste) 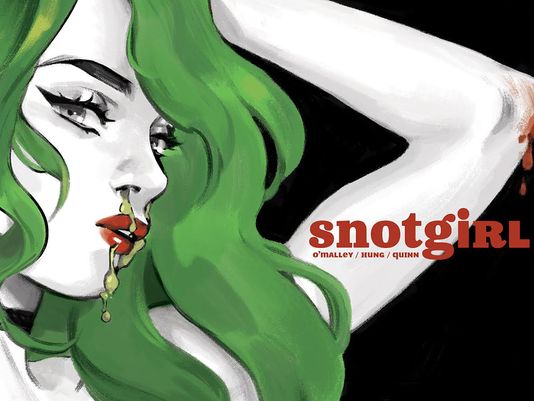 Snotgirl by Leslie Hung and Bryan Lee O'Malley: This will be O'Malley's first monthly comic, and while his writing doesn't always convince me, I absolutely love Leslie Hung's art and am incredibly pleased to see her snagging big projects and reaching wider audiences. The premise of this does sound darkly appealing: bringing together fashion, online media/celebrities, competitiveness and validation, and social/expectations and pressures on women. The story centers on cyber-famous protagonist Lottie, a fashion blogger who whilst known online as 'flawless and fun,' is struggling in real life, having been recently dumped and finding herself unable to get along with her fellow bloggers. 'She's vain but insecure and self-aware, which makes it hard for her to reveal herself to the people that are closest to her,' says Hung.

But there's a sting: Lottie has allergies -powerful allergies- and when the snot flows, you better watch out! 'She's this beautiful girl who might turn into a snotty mess at any moment. Lottie projects a carefree attitude as well as poise and grace, but inside she's a bit of "a scared little weasel,' says O'Malley, describing the book as 'dark as hell, but it takes place in a heightened world. The characters are lovable and ridiculous, and then they do terrible things to each other.' (via USA Today) 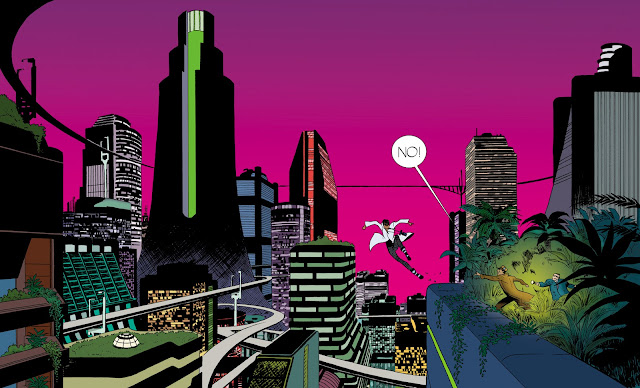 A collected, print edition of The Private Eye by Macros Martin, Brian K Vaughan, Muntsa Vicente: You remember how Brian K Vaughan's, Marcos Martin's and Munsta Vicente's digital, future-set, pay-what-you-want comic, The Private Eye was never going to get a print release, ever? Well, it's getting a print release. Image will be publishing a 'Cloudburst Edition' that collects the 10 issues for which the story ran- which is good news for me because even though I liked and read the first few issues of that story I dislike and am bad at digital reading, so never finished it. This turn of events apparently only came about after Robert Kirkman approached Vaughan regarding Image publishing a print edition of The Private Eye- which Vaughan agreed to on the condition that he got to do a The Walking Dead story in return. Which means there'll also be a highly unlikely crossover story coming your way, hosted on Vaughan and Martin's Panel Syndicate site.

I can't see a print edition not doing well- for those new to the story, it'll have Vaughan's name on it and will be published by Image, but Marcos Martin's art and Muntsa Vicente's (who coloured Javier Pullido's run on She-Hulk) gorgeous colouring are a huge attraction. Murder and intrigue and sci-fi. I've made myself want to go read it.
Posted by Zainab at 12:17