Jiro Taniguchi's The Walking Man, 'ma,' and the deliberation of the active nothing 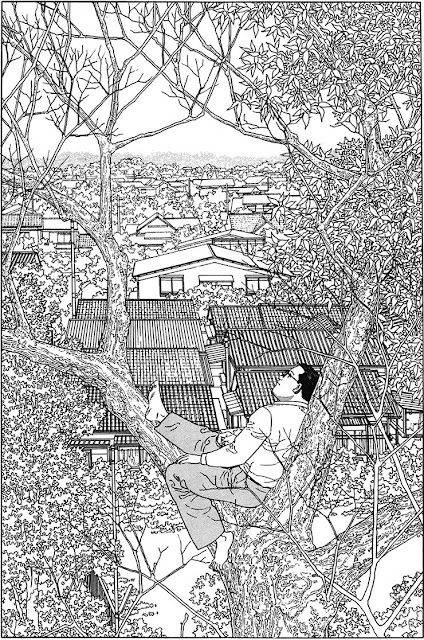 In an oft-narrated anecdote, the late American film critic Roger Ebert spoke of the time he first interviewed Japanese animator, director, and cultural icon Hayao Miyazaki. Ebert told Miyazaki he loved the 'the "gratuitous motion" in his films; instead of every movement being dictated by the story, sometimes people will just sit for a moment, or they will sigh, or look in a running stream, or do something extra, not to advance the story but only to give the sense of time and place and who they are.' "We have a word for that in Japanese," Miyazaki replied. "It’s called ma. Emptiness. It’s there intentionally.” 'He clapped his hands three or four times. "The time in between my clapping is ma. If you just have non-stop action with no breathing space at all, it’s just busyness. But if you take a moment, then the tension building in the film can grow into a wider dimension. If you just have constant tension at 80 degrees all the time you just get numb.'


It's a nice, quotable little story, as incidents involving Miyazaki habitually are, and it's one I was reminded of when reading Jiro Taniguchi's The Walking Man. In The Walking Man, Taniguchi's nameless protagonist is simply shown on a series of walks. Not hikes, per se, or walks specifically designated as such activity, but here he is on his way into the town, going to the woods, along the waterfront, to the baths, caught in the rain, climbing the hill to the temple. Taniguchi combines an iteration of ma in conjunction with an ambient, conflict-free narrative. His protagonist is depicted in relation to his environment and surroundings, his thoughts and feelings largely unknown and internalised (although it's via the man's outlook that the reader 'sees,' so indications as to response are ostensibly framed by his perception). The reader doesn't see him at home (every now and again a walk will see him departing from or returning home and conversing briefly with his wife), at work, interacting with friends, they're not privy to his fears or desires, his disappointments or triumphs, his troubles. They don't get to see him be good or bad, his nuances and habits; they just see him walk. What little the reader gleans about the man and his personality is gained here, through his walking. 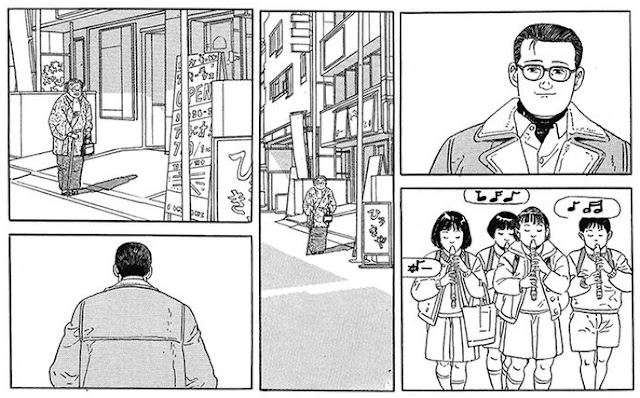 The literal, English language definition of ma translates to various words such as gap, empty, distance, space, time, blankness. It's an aesthetic that manifests itself in various aspects of traditional Japanese culture, particularly Noh theater; a consciousness of place between two defined or structural spaces. So while ma can be applied to anything from a comfortable silence to interior design, inherently it represents a mindset and approach; a space free of clutter and chaos that allows for an intensification or clarity of vision. The idea of sifting through things, to clear  a space in which to find what matters, what's essential, what's pure; the emptying of space gives greater significance to what is then placed within it. A focused minimalism and meaning. Where there is too much, nothing stands out, and things struggle for value and meaning. It could be a form of meditation, to clear the mind and focus on the self; its achievement and application extending to both the physical and spiritual.

And this is what we see applied to The Walking Man: the stripping back of the man's life from all else to present his version of ma.  The man's walks function beyond purpose: he takes pleasure in the act and the sights and experiences it affords him. It is the walks that provide him with the opportunity to leave all else and have these moments of quiet, of solitude, of reflection, of selfishness, and of nothing -devoid of intrusion. Nothing unremarkable or untoward occurs on the walks; they are ordinary but he uses them to looks, to slow down, to stops and observe, to be. As much as ideologies can sound complex and enforced, there is deliberation in the man's choice to make these walks a vehicle for ma, although there is an absence of rigour and tension, the pressure to do; a centering of non-action as the action. It's not a literal nothing, it's the paring back of action to an almost reductive extent, honing on one pure element, rather like Geof Darrow's most recent Shaolin Monk outing. Over 4 issues, the monk silently, unremittingly fought zombie hoardes for page after page after page; his one action focused to the point of becoming inactive, neutralised, almost. It becomes something new, something else. 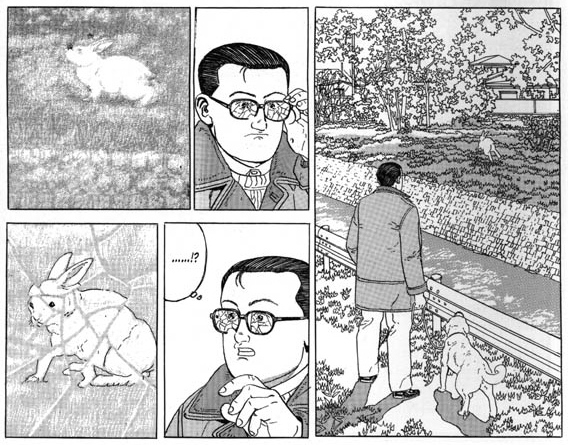 So the man walks and sees and feels, and by proxy the reader too walks and sees and feels: a panel in which a jar of flowers are left on the side of the pavement on a bridge, a dragonfly mosaic embedded in colourful stones on the ground, ducks gathered in a pond, getting caught in a sudden soft snowfall. In one story he buys a balloon from a stall in the market and opens it right there, blowing it up, as passerbys giggle at the sight. In another he clambers up a tree to free a toy plane for some young boys and decides to stay there a while amongst the leaves and blossoms to take in the view. One of the most amusing and warm incidents occurs when he becomes involved in a 'walk-off' with a another, older man, each trying to out-do the other in pace, dodging traffic and people, before silently, smilingly coming together to walk side by side. His glasses break on one outing, the lens shattering, and he partakes in an almost childlike-enjoyment in taking them on and off at various intervals, reveling in the two new perspectives the event offers him: a blurry, hazy view minus the broken receptacles, and a shattered, kaleidoscopic one when he puts them on. Taniguchi delights in drawing both the soft, out-of-focus images and the fun, multi-fragmented illustrations.

If walking is the route to achieving ma, and the man its vessel, Taniguchi's clear, precise style is well-suited to portraying the crystallisation of the objective. There are few who exemplify neat, elegant beauty, and detail the minutiae of environment better. Like the walking man, the art too, seems to embody the possibility that ma offers: present and suggestive but shimmering, and Taniguchi and his protagonist fill it with romance and hope; contentment and optimism. It's filled with good. Out of everything Taniguchi could choose to share about the man, he chooses this one thing. The small, solid strength of possibility. The possibility of good. Look, he says, look, and see. See how easy it can be. 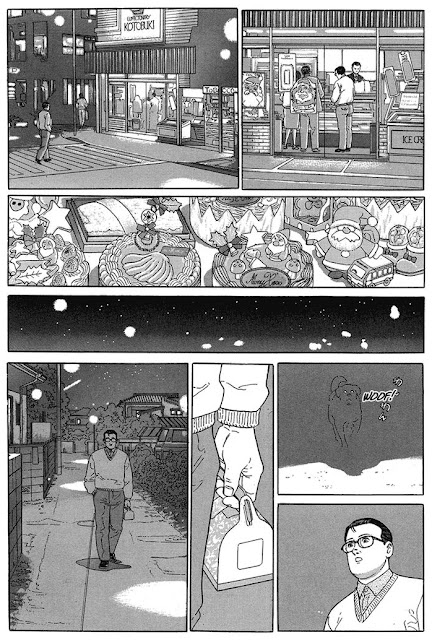 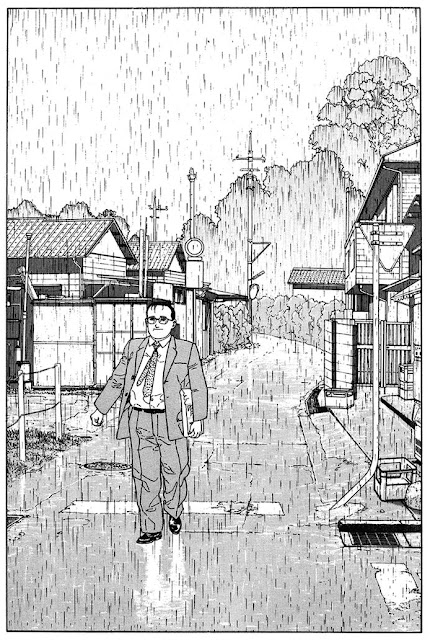