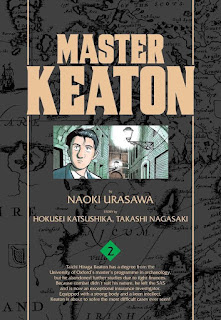 I wan't too sure about the first volume of Master Keaton when it was released this January. In fact my closing line in reviewing that book was: 'an initially wobbly start, but there’s plenty here to hold interest and allow a second installment to be the real arbiter.' So I'm pleased to report that the second volume is indeed much, much improved. Introductions over, the emotional beats and gaps in Keaton's characterisation come together in smoother fashion as his job as specialist insurance investigator serves as the perfect vehicle via which to tell a myriad of stories.

Essentially, Master Keaton's focus as a book is people. People's ways and lives, their mistakes and triumphs, their faltering and learning. It's approach to the many characters that pass through its pages is empathetic in the first and never pandering. Keaton is not an archaeologist by accident- his desire lies not only in discovery, but in reason and understanding: what happened and why. The people he meets via his travels represent a spectrum of humanity and its innumerable facets, and his role is to excavate and collect their stories. A degree of controversy exists around Master Keaton's creation, and exactly who wrote what, but the impactful yet interchanging characters and  feels like a very familiar Urasawa trait.

At the same time, Keaton himself is not neglected. His personality, who he is, and his life experiences are fundamental in him being able to function in this capacity and aid others. The constant of his life is a background anchor the reader returns to; here we learn more about his hopes and dreams. Keaton seems to be in a period of stasis- he remains somewhat idealistic in his hopes (even while he ruefully acknowledges he's too old to have dreams now), but he's divorced from his wife who he still loves, and isn't any closer to facilitating his life-long goal of setting up an excavation site along the Danube River. It's nice to see a comic character struggle with the anchoring of the everyday- Keaton loses his job at the university, finds another, and loses that, too. Not being able to commit or focus on any particular thing leaves him with a lack of purpose. He remembers his youth and drive and re-encounters the professor who so inspired him, but now must work to negotiate beyond the time he knew; altered expectations and changing life goals.


This is further reinforced in a delightfully funny and poignant chapter where Keaton is in London, and decides to track down an ice-cream van recommended to him by his daughter, Yuriko. He bumps into an old school friend, Milton, who unbeknownst to him is going through a painful divorce. Milton envies Keaton's apparent carefree, youthful exuberance, as his own insistence on job-maintained stability has cost him his marriage. The two ruminate on the challenges and compromises of adulthood; attempting to find some stability whilst not losing sight of what makes life worth living. Keaton remarks how joining the army reforged him, and now they must reforge again. You don't become you once. There's some great sequences as Milton and Keaton race after the ice-cream truck and later double-up on a bike to chase after it again- such joyful humour imbued in the running figures, and their expressions. Urasawa slowly turning Milton's reserve and aghast-ness into enjoyment is superb to behold.

There's a continuation of similar themes in each of the people and stories Keaton encounters. 2 Olympic runner friends and rivals sharing a secret, a grieving abused woman abused refusing to believe she's worthy of love,  a young girl in the midst of a custody battle, a man living the repercussions of his dream, 2 old friends fighting a war of the past. People in a place of limbo; brought about via actions inflicted by others, left floating and lost. People in need of forgiveness- often in need of forgiving themselves. A chance at hope- nothing big or flashy, but the opening of a path to take. Change can come from a sad event or place but it doesn't have to be sad. They seamlessly thread with Keaton's own mind-frame and situation, What's best about the running undercurrent of these themes is that they are largely presented as evolutionary (not sad, per se)- and Uraswa's cartooning is key in maintaining the balance between consideration and levity- that establishing of tone. His art throughout is fantastic- there's certainly no indication as to the earliness of the work. The globe-trotting setup assures him a variety of locale and landscapes to bring to life: his backgrounds are rich and textured his foregrounds  and characters cleaner and crisper. He's one of the absolute standards in illustrating and differentiating people via faces, features, and body-types.

Two additional points of note in this excellent tome: the story with Keaton's Dad conducting his own mini Columbo-like investigation back in Japan with his special dog Tasuke, is golden. Lovely and affirming, but always with that sense of verisimilitude. I like that he's included and not forgotten about, and could probably read a whole book on the adventures of deceptively doddering man and dog. The other interesting detail is the insertion of omniscient commentary at the end of stories with sociopolitical messages (see below). It doesn't feel too on the nose because it's coming after the story, but it is pointed in that it drives home 'this is what that was about.' It's not as jarring as it could be, due to Master Keaton's empathetic bent, but it's curious to see. Overall, this second volume is a much more settled affair, offering intelligent and thoroughly engaging stories with drama, humour, feeling, and intrigue. 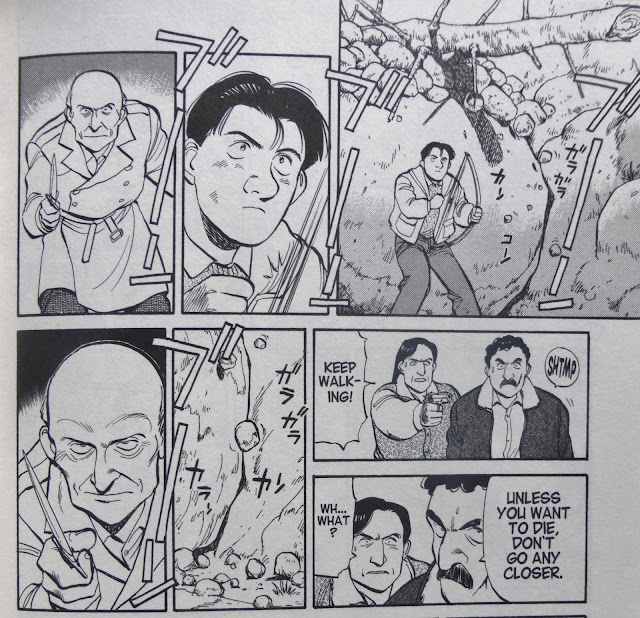 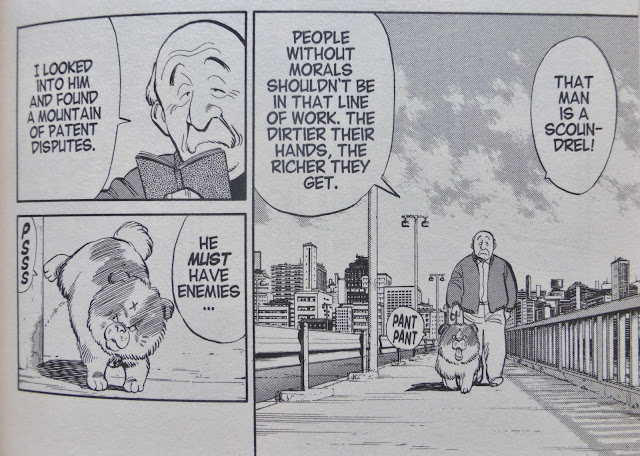 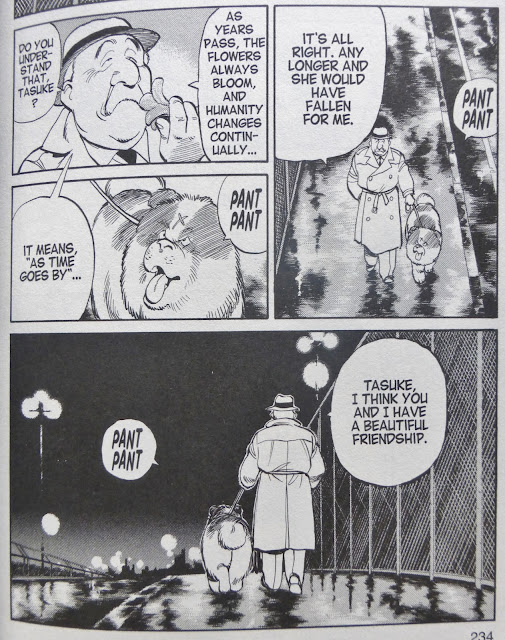