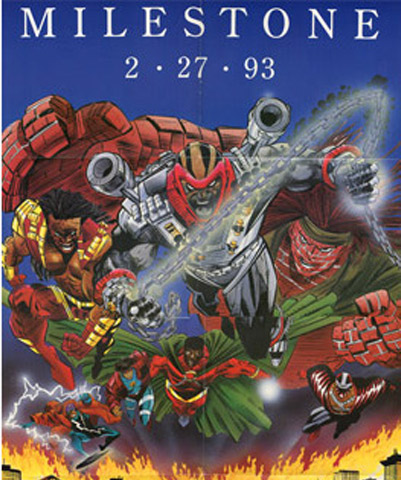 I wrote about Milestone Media's return in late January of this year, when Reggie Hudlin, Denys Cowan, and Derek Dingle sat down with The Washington Post to talk about the company's relaunch. And one of the biggest news stories coming out from San Diego Comic Con this week has been the more definitive announcement of Milestone once again partnering with DC to release a series of one-shots, mini-series, and original graphic novels. For the canon and multi-verse inclined, these will take place on 'Earth-M,' which will be home to the 'Dakota' universe of characters from 1993’s Milestone Media including Static Shock, Icon, Rocket, Hardware, Xombi and more, and a host of all-new characters. Milestone are looking to publish up to two 'Earth-M' titles as hardback graphic novel releases annually, as well as a yet-to-be-determined number of miniseries and one shots. These books will feature the creative talents of both Hudlin and Cowan, as well as DC's Jim Lee and Geoff Johns. Additionally, the new agreement will also encompass the re-release of older Milestone content in both print and digital format collected editions.


Milestone hope to infuse their universe with new heroes and villains, yet still retain the same kind of contemporary and socially relevant tone of storytelling that made the company such a groundbreaking imprint in the early 90’s. 'Milestone Media was the first company to create a superhero universe full of Black, Latino, Asian, and white superheroes - both gay and straight,' said Hudlin. 'Its fan-base was equally diverse. This new relationship will enable us to not only revive classic Milestone characters, but introduce new ones as well. Denys and I have had a great time working with Jim and Geoff as we reinvent the Dakota Universe for the 21st century. We have a lot of innovative ideas – from how the characters are presented to how the books are released – that will excite both new and old fans.'


'We couldn’t be more proud and excited about the opportunity to bring the ‘Dakota’ universe back to DC,' said Lee. 'This is a huge step forward for us in bringing readers a more diversified lineup as part of the New DC Universe, and we’re anxiously looking forward to telling new stories that are socially and culturally impactful and representative of the world in which we live.' It's interesting how, with all the talk of diversity at comics companies, DC's version of that could potentially be renewing their partnership with Milestone and backing and facilitating them to do what they do  -which is a very 'best outcome' way of looking at it, of course.

For comics fans such as myself, who missed Milestone the first time around, the re-release of older material in concurrence with new (and in both digital and print) is a really good move: the opportunity for people to jump on whilst having the option to get familiar with characters and titles if they so wish.  I'm curious to see how Milestone will operate in hiring new talent and putting out new titles; I'd love to see them take on more than superheroes, but that's probably unlikely. Taking a Mark Doyle-like approach in giving books specific sensibilities with distinctive art, even within the superhero remit could be fruitful: horror, girl-about-town, and so forth. In the meantime, you can keep abreast with further Milestone developments via their Twitter and Facebook accounts.