The Hunter by Joe Sparrow: to be a bad man [review] 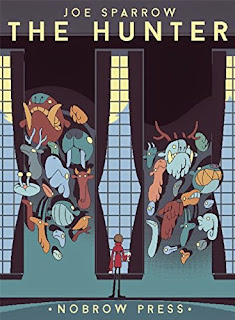 The Hunter by Joe Sparrow, published by Nobrow


You know how it goes: you're a rich dude, you throw a party to impress your fellow rich brethren, but instead of paying attention to you, it's that smooth fellow with the shiny hair and dainty hands they all clamour around. So being the fourth Earl of Reisenskog you do what anyone in  your position would do: announce  a vow to kill one of every creature alive. It's a bold statement; one grandiose enough to befit the earl's stature and sense of importance. But Joe Sparrow's tale isn't one of a man bent on completing a seemingly insurmountable task, but more a parable on what people choose and allow to define themselves, and how that impacts on who and what they become.

The Earl develops a taste for hunting and killing after his father takes him out on his first shoot at the age of 12; hunting and killing is a pursuit seemingly encouraged and nurtured in him from a young age and something he's good at. There's no believing you take on the qualities of the animals you killed for him -more so if you eat them, they are just things to be conquered and displayed. And so, a decade after swearing his  relentlessly driven, blood-soaked oath, the Earl finds his walls heave and creak with the weight of mounted prey from every nook and cranny of the land: 'The world was caught, killed, classified, and conquered, down the sights of a hunting rifle.' And he throws another party to celebrate, one that in the tradition of Macbeth, raises ghosts and truths. Here, he finally realises he is alone; alone and empty in his castle after meaninglessly affirming his dominion over every creature that walked the earth. Yet The Hunter isn't the story of the comeuppance of a bad man, either. Instead Sparrow slants it as an exploration of a man who is a certain way through upbringing and external conditioning, yes, but also through choice and inaction -apathy, and  looking at where that leads him, to the point of whether he's repentant or not, and why, that too, may be. 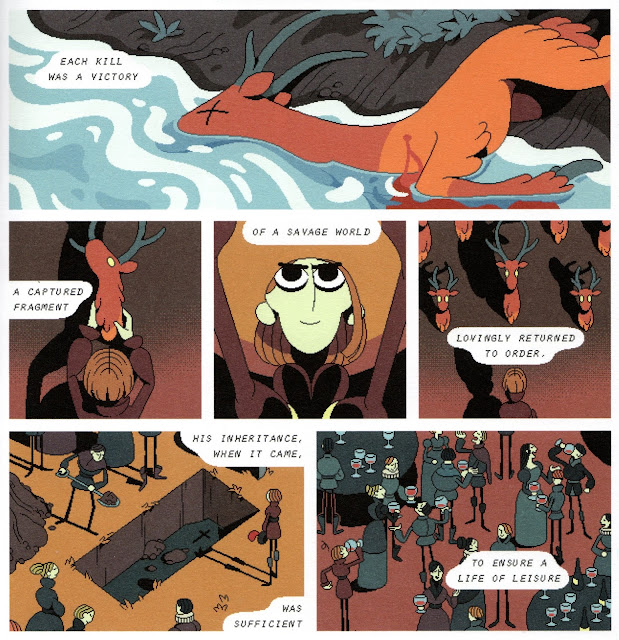 The Earl is jealous and resentful of people who appear loved and lauded for their easy manners and nobler pursuits of literature and the arts, but he himself doesn't make any effort towards self development, via engagement in other interests or people. It brings to mind this apt passage from The Social Network; people may or may not dislike the Earl due to his extreme hunting and enjoyment of killing things, but they definitely dislike him because he's insular and creepy. They dislike him because he's cruel and because he's never shown interest in anyone other than himself. He doesn't learn or grow, and views others behaviour towards him as their inadequacy. And he has taken this polite but deliberate shunning to defiantly hone the very thing that has contributed to it, defining himself through hunting and killing. Personhood is environmental and influential, but there is always choice in the actions you choose to take, the traits you decide to nurture; you become the sum of what you choose to cultivate and do.

The Hunter is notable for its pixellated art- applied to lines, lettering, textures, and all. It evokes an early 8-bit rpg game feel over proceedings, and though it takes a while to adjust to, and may sound gimicky, it works. It works really, really well. The graphics and stylisation help draw parallels with the game/game theme: kill and collect the list of following creatures and contribute in transporting the story to a more level. The jagged line and ye old time fantasy setting, coupled with the earl's nefarious villainy,  imparts a dramatic, sinister cloak to events that a more clean and sure line would perhaps not equally suggest. It infers glitchiness, a sense of wrong, leading one to wonder when it will skew and pull back into place. The slightly jagged lines disrupts; allowing for pause, gaps in between movement, a slowing down that causes the reader to look and read closer, make more of things. Sparrow uses shadow adeptly to thrust atmosphere and tension into the mix and an array of colours that are never boring. The Hunter manages to be both an attractive and interesting book, in terms of visual appeal.

Nobrow's 17x23 series of comics have been hugely impressive this year, and of consistently high quality. The line has been fulfilling its remit of providing a platform to very good cartoonists who you are more likely not to have heard of, and for whom these books often act as their first published major work. For readers interested in discovering or reading comics from fresh, up-and coming cartoonists it's a slate that is proving bountiful in 2015, with Jen Lee's Vacancy, William Exley's Golemchik, and Wren McDonald's Cyber Realm all proving excellent reads. The Hunter continues that trend. 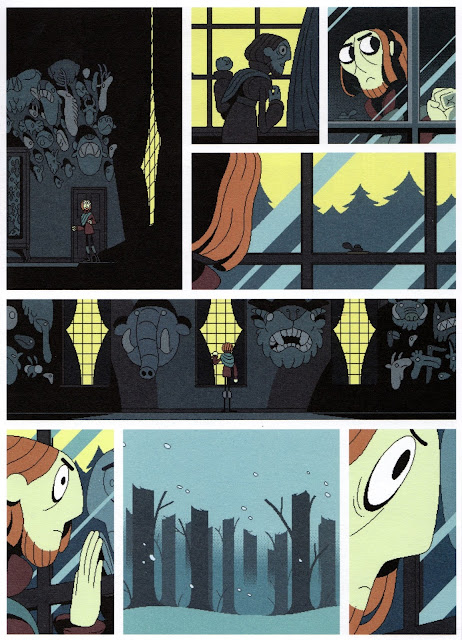 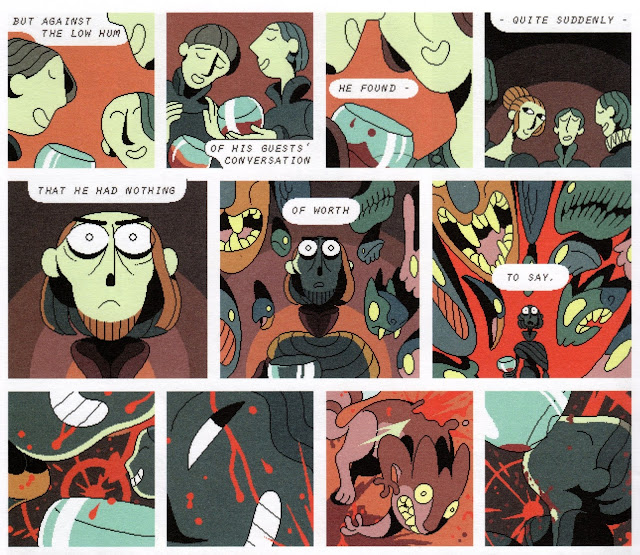