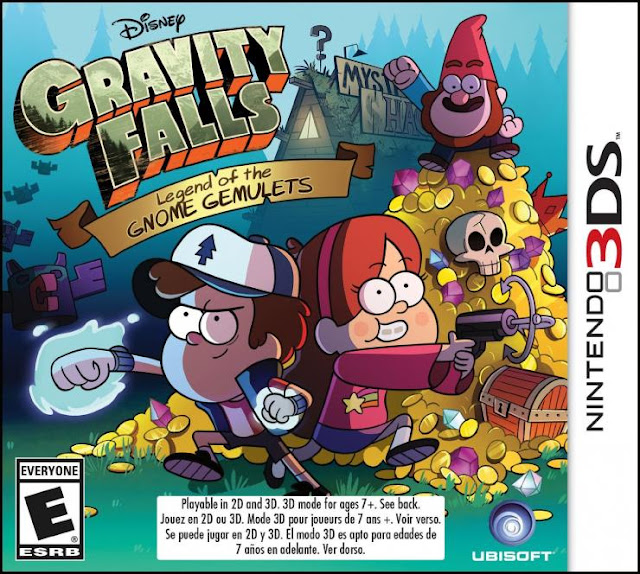 Coming off hiatus quickly to write about something that isn't even comics related! But hopefully still of interest. If you follow me on Twitter or have liked the blog's Facebook page, you know I'm a big fan of Alex Hirsch's Gravity Falls. I wrote a little bit about why in this post taking a look at some of the Gravity Falls toy figures Jazware released, which I'm going to quote here:

'Gravity Falls brings together a lot of elements that appeal to me: the mystery of the week, the spooky going ons, the general X-Files vibe (in the theme tune- it's not just me right?), combined with the familial core of the story- Mabel and Dipper's relationship with one another, and their Grunkle (great uncle) Stan (as someone who comes from a big, close family it's very recognisable). On top of that you have the larger, long-running narrative of play -what makes Gravity Falls such a hub of weird? Who wrote those diaries?- with some truly unforgettable characters -how good a villain is Li'l Gideon?- and standout, fun episodes: Fight Fighters, Boyz Crazy, and more. It treats all its characters with care and respect, too- they may be funny or flawed or contemptible, but they're all so well realised that it's easy to empathise with each on some level. Ostensibly, the show is about growing up- Mabel and Dipper are on the cusp of teenager-hood, on their summer holidays -perhaps the last they may want to spend together, or at their great uncle's house/cabin-, and this last special time where they still believe in monsters and magic and wonder, or before their bond loosens, is captured here. Also it has Neil deGrasse Tyson as a super intelligent talking pig.'

So I'm pretty excited about the news that Disney have teamed up with game publisher Ubisoft for a new Gravity Falls game for Nintendo 3DS. Announced on the official Ubisoft Blog, and titled 'Gravity Falls: Legend of the Gnome Gemulets,' the game will be a 2D side-scroller, featuring an original story that sees the twins enlisted to find stolen gnome artifacts. Developed with the direct involvement of the show’s creator, Alex Hirsch, players can choose and switch between Mabel and Dipper, both of whom have been given an array of new abilities to best fight the assortment of monsters they'll be facing, solve puzzles and get ahead. Mabel's trusty grappling hook will allow her to reach high places, and she can also take on enemies in long-range combat with her Fleece of Bedazzlement-enhanced sweater sleeves. Dipper can take care of any threats at close-range with his Gnome Battle Cuffs and can search for clues using his trusted flashlight. I'm pleased to hear that the game will be all-ages -as much as I enjoy it- this is a cartoon for children, so it makes sense the game is similarly pitched at that demographic, and this looks like a lot of fun.

You can watch a teaser trailer for Gravity Falls: Legend of the Gnome Gemulets below, which looks like it will include appearances from regular show characters such as Gruncle Stan, Soos, and Wendy. I'm personally hoping for a level in which players have to smackdown/defeat Lil Gideon, but I like the look of it very much. I sold my Nintendo DS a while back because it just wasn't getting enough use for me to justify having it around, so I guess I'm in the market for one again now, before the game releases this autumn. Apologies if I got any technical details wrong in this article- I'm not familiar with games at all.