With pound in hand: July comic and graphic novel releases

The summer's here and for comics, that usually means a bumper month in terms of releases, so here you are: picking out the cream of this month's releases, in graphic novels, collected editions and anything else notable: 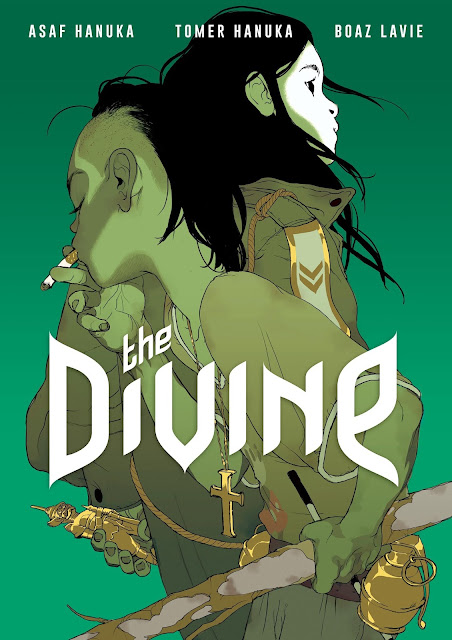 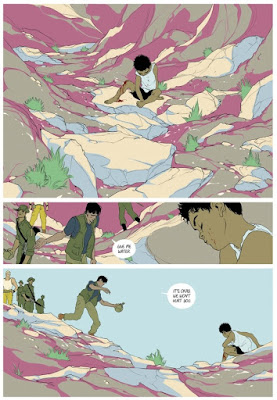 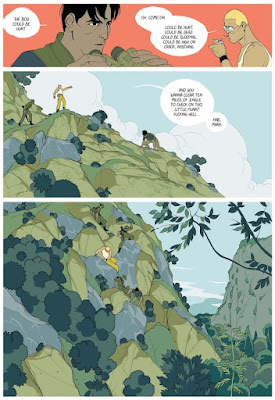 PICK OF THE MONTH: The Divine by Boaz Lavie, Asaf Hanuka, and Tomer Hanuka, First Second:   I think you all know how big  an appreciator of this book I am by now. It was on my most anticipated comics list for 2015, I did a preview/interview feature on it, and have been sharing lots of pictures and thoughts on Twitter. I reviewed it yesterday for The AV Club (no spoilers), so I'm going to quote from there to give you a premise, but just buy it. It's superb. 'Former military man Mark finds his civilian life interrupted when Jason, an old army friend, persuades him to take on a covert, lucrative contract in civil-war ridden Quanlom. With a baby on the way, and he and his wife desperate to move out of the state, a reluctant Mark agrees to undertake the operation in the obscure South Asian country. But the job turns out be far from simple in ways beyond the realms of Mark’s anxieties, as his decision to leave his team and help an apparently injured young boy back to his home has drastic, unforeseen consequences. Finding himself held hostage by a group of child soldiers leading an indigenous resistance movement against the military junta, Mark agrees to accompany them to disarm the bomb he helped put in place.' 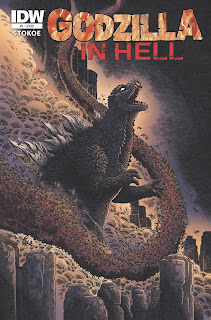 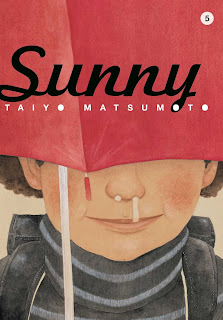 Godzilla in Hell #1 by James Stokoe, IDW: The three words of that title alone are enough to get me on board, but for those with a more cursory curiosity, let me explain why you should at least pick up this first issue. One: it's written and drawn by the excellent James Stokoe. Two: it looks like this. Three: it's an excellent, silent comic that reads as a stand alone in its own right. Godzilla finds himself suddenly plunged into Hell and warily makes his way around his new infernal surroundings, taking on any comers as he goes. Recommended for fans and casual readers alike.

Sunny vol 5 by Taiyo Matsumoto, Viz: Matsumoto's ongoing series centered around a group of children living in an in-and-out foster home of sorts (a private run facility for those who, for some reason or another are unable to stay with their parents), is one of the best series around, made better by Viz's gorgeous hardback handling of the material. Its title is derived from an old, abandoned Nissan Sunny, which the kids love to sit in, and use as a place of solace, away from the adults and their worries. The paces is quiet and more reflective, and Matusmoto's realistic tendencies married with a surreal quirk really feed into the alienation and oddness of the kids. One you should be reading. 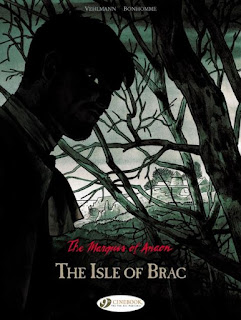 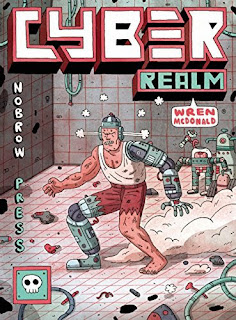 Cyber Realm by Wren McDonald, Nobrow: I believe this is Wren McDonald's first 'published by a publisher' work, which is nice to see. The narrative again delves into his love and interest in gaming, this time with a more salient and contemporary edge, whilst his cartooning provides an element of fun throughout. 'Before the end, all technology was locked away for safekeeping in a place deep underground. This place is known as the Cyber Realm. The only known entrance is safeguarded by "The Master" where he and his minions control all of the power within and use that technology to oppress what is left of the human race. Due to the massive gap in technology, those who are without it are helpless. That is, until now. Follow Nicolas as he attempts a desperate and seemingly impossible mission to make things right.'

The Marquis of Anaon volume 1: The Isle of Brac by Matthew Bonhomme and Fabien Vehlmann, Cinebook: I was pleasantly surprised to have this waiting for me in the shop today,  along with the latest volume of Alone and Kenya, which means Cinebook's often late-running schedule is on time. You may remember me getting excited about this being translated in English back in April, and that's because it's written by the always-interesting Fabien Vehlmann (Green Manor, Alone, Beautiful Darkness) and beautifully illustrated by Matthew Bonhomme -click through on that link to see some of his gorgeous pages. Really looking forward to delving into it. 'Jean-Baptiste Poulain has been hired by the Baron of Brac to tutor his son. When the young teacher arrives on the island off the coast of Brittany, he’s immediately struck by how much the population seems to both hate and fear their lord. Which doesn’t stop the locals from going after the aristocrat’s people. Jean-Baptiste is brutally attacked – just after Nolwenn, the baron’s son, is found beaten to death…' 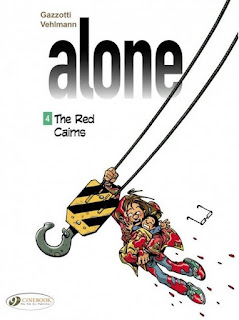 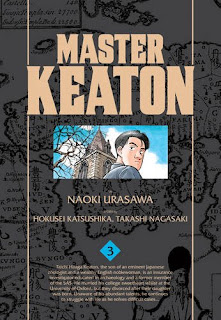 Master Keaton volume 3 by Naoki Urasawa, Hokusei Katsushika, and Takashi Nagasaki, Viz: I wasn't that convinced by the first volume of Master Keaton, but the second book really won me over, which goes to show that sometimes series can be worth persevering with -especially if Naoki Urasawa's involved with them. No doubt this will see Japanese-English Indian-Jones by way of a librrain type protagonist Taichi Hiraga-Keaton, undertake more of his adventures around the world under the guise of insurance investigating. Hopefully it will also include healthy dollops of his duaghter nad father- two supporting characters who really help the book shine. 'Educated in archaeology and a former member of the SAS, Master Keaton uses his knowledge and combat training to uncover buried secrets, thwart would-be villains, and pursue the truth…'

Alone volume 4: The Red Cairns by Bruno Gazzotti and Fabien Vehlmann, Cinebook: This excellent children's series following a group of children attempting to survive and make sense of what happened after a strange, mass event 'vanishes' all the adults from the world, swings into its fourth volume. You can find reviews of all 3 previous books at the 'reviews' page at the top of the site, but suffice to say it's solid comics. 'The five children, now accompanied by several dissidents from the Clan of the Shark, have returned to Campton, where Ivan found some clues about the night of the Vanishing. One evening, as they are discussing the organisation of their new camp, the Master of Knives comes to ask for their help -and collapses, gravely injured. Searching the city for what attacked him, the children are stunned to discover huge piles of objects covered in red paint…' 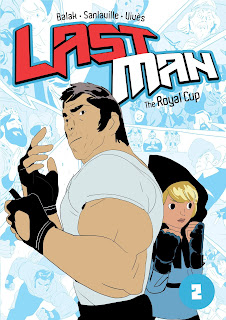 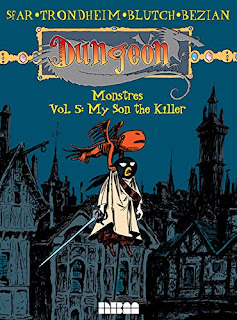 Last Man volume 2: The Royal Cup by Bastien Vives, Balak, Michael Sanlaville, First Second: I already reviewed this one at length, thanks to an advance copy from publishers First Second. It has its problems, and I always find it interesting that regardless of how much praise you bestow on something, it's the criticism that people hone in on and talk about. But it's good enough, and it's problems not yet big enough, that I will continue reading and buying and consider it worth it. The art, in particular, is an exercise in dynamic layouts, fluidity, and expression. Lovely. 'Richard Aldana, the mysterious stranger who entered the Games in the first volume of Last Man, continues to defeat all of his competitors, despite his outlandish refusal to use any magic, and to rely solely on martial arts. With young Adrian fighting at his side, he's beginning to look like a likely contender for the Royal Cup. But in a breathtaking twist, everything changes: this world is not what you thought it was, and Richard Aldana is certainly not who he claimed.'

Dunegon Monsters 5 My Son The Killer by Lewis Trondheim, Joan Sfar, Blutch, and Frederic Bezian, NBM: I enjoy Dungeon a lot, but it's also one of those series I don't have  a pressing need to buy each volume as it releases; I like to dip in and out and know that the books are of a quality that will provide a satisfying experience each time. This latest volume to be translated to English is on here is because it's the volume that's illustrated by Blutch and Frederic Bezian (the English editions collect 2 French albums into one book)- 2 outstanding artists whose work I don't see enough of due a lack of French. This volume gives the origins of Marvin the Dragon, and Gork and Krag, brothers and soldiers of hell. 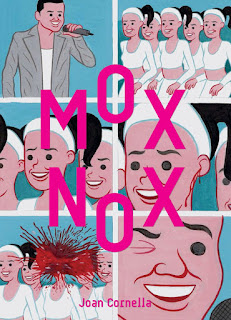 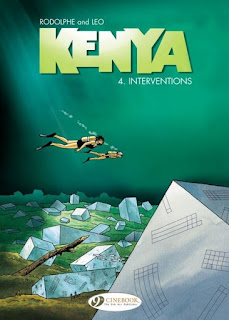 Mox Nox by Joan Cornella, Fantagraphics: Published in Spanish in 2013, Cornella's comics are largely wordless, so translation isn't really the issue, as much as getting his work into the sphere of a n even wider audience and into book stores. His graphic six-panel strips usually follow a certain routine: something awful occurs, somebody attempts to rectify it, a solution is settled upon, one which all seem to be happy with, but one that leaves things worse than when they started. It's gross and utterly nonsensical, the story-telling so tight, so visually smart. i tend to assume people are as aware of things as I am, with regards to popular online artists, but I've talked to a number of people who don't haven't come across Cornella's work, so this should definitely help.

Kenya volume 4: Interventions by Leo and, Cinebook: One of those series I read purely for entertainment value. That, and I enjoy Leo's depictions of odd, dinosaur-like beasts. It's a mixture of alien invasion slash dinosaurs slash retro safari spy thriller. Bonkers, but gripping for it. 'From the shores of Lake Victoria, Kathy and Remington witnessed an extraordinary event: the coming of a massive UFO. Stunned by the sight, they’re taken prisoners by Irmanius, who’s working for the Soviets. Faced with the oddness of their situation and its potential dangers, though, Westerners and Communists decide to team up. A temporary alliance that may not survive the fantastic discoveries ahead of them.' 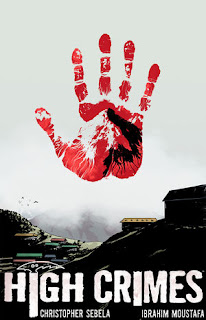 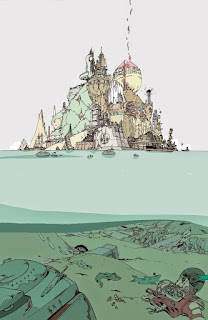 Island by Brandon Graham, Emma Rios, Marian Churchland, Ludroe, and others, Image: Island is a new 72-page, oversized format monthly comics magazine that will see an array of international artists and writers play within the sandbox it provides. The first edition, due out July 15th, will see a multi-page illustration spread by Marian Churchland, ID, a new story by Emma Rios, the return of Brandon Graham's Multiple Warheads, Dagger Proof Mummy by  Ludroe, along with  a prose essay by Kelly Sue DeConnick and additional material. Amongst other things, it promises concepts for imagined mech designs, fictional fashion ranges, articles that blend prose and comics, and of course, actual comics.

High Crimes by Ibrahim Moustafa and Christopher Sebela, Dark Horse: Originally serialised digitally through Monkeybrain Comics, and nominated for an Eisner, I've been keeping an eye out for this snowy crime story (now in print edition courtesy of Dark Horse) because it fits right into my sand box. 'Disgraced Olympic snowboarder Zan Jensen has relocated to Kathmandu as a climbing guide, while running a sideline business as a high-altitude grave robber. When a body is found at the summit of Everest with a treasure of state secrets under its skin, Zan finds herself in the crosshairs of a government hit squad bent on bringing the body home. As she races to the roof of the world, Zan will navigate bullets and avalanches to find salvation in the deadliest place on earth.'
Posted by Zainab at 23:56