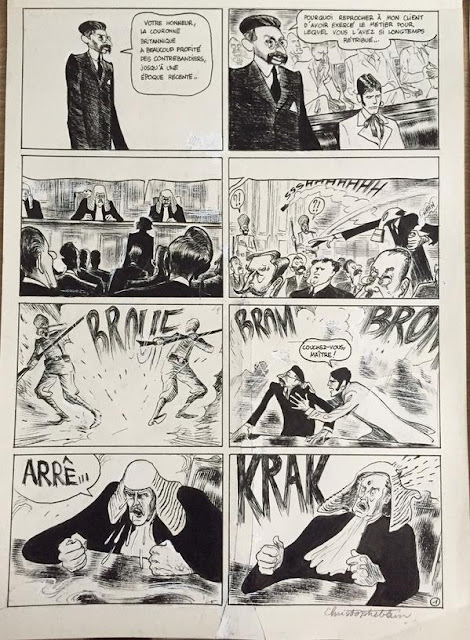 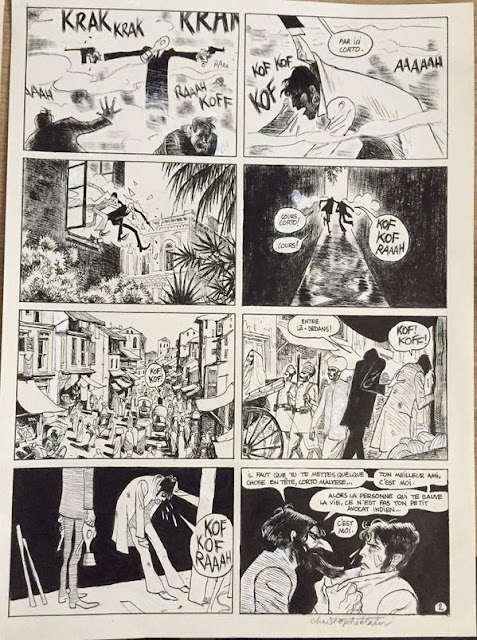 I've been watching these Christophe Blain Corto Maltese pages make the rounds for the last couple of weeks, without having the time to stop and read what the story regarding them was. I knew if Blain was actually working on Corto Maltese it would be much bigger news, so I imagined these to be the product of an homage or some fan-art that had surfaced. However, it appears Blain and Joann Sfar were tapped by publishers Casterman to come up with a proposal for a new Corto Maltese story, of which these pages are a result. You may remember last year I covered Casterman's announcement that they would be publishing a new Corto Maltese book, written by Blacksad scribe Juan Diaz Canales and illustrated by Spanish artist Ruben Pellejero. It seems Blain and Sfar were approached around the same time to also come up with a test pitch of their vision of  Hugo Pratt's enduring sailor-adventurer. Set in South Africa in 1915, it features a dapper young Gandhi in his lawyer days, defending Corto as he sits in the dock: The British crown has benefited greatly from the smugglers, until recently... Why accuse my client of having exercised the profession for which you have paid so long...' At which point, a man wearing a gas mask breaks into the court-room, detonates a bomb, and amidst the confusion, grabs Corto and helps him to escape. Once they're out on the street to safety, the masked individual reveals his identity: it's Rasputin.

Sfar took to his Facebook page on August 10th to clarify speculation surrounding the alleged 'abandonment' of the project, and his statement is worth reading in full. He states that unbeknownst to him and Blain, Pratt's heirs had already hired Canales and Pellejero for a new Corto book - it's unclear whether Casterman were aware of this but it's difficult to imagine that the publisher wouldn't be involved. Sfar writes that he took inspiration from Pratt saying that if ever somebody were to continue Corto's adventures after him he hoped that they would stamp their own individuality on the character and world, much as Frank Miller did with Batman. From the brief look and premise of these pages, it would appear this is what Blain and Sfar were setting out to do. Instead Casterman and the Pratt estate opted not to deviate too far from the direction of the original property, choosing the safer option of sticking with stories that offer more in the same vein. Sfar goes on to wish Canales and Pellejero luck, and emphasises that 'There was never any question of the quality of the respective projects, nor of projects put in competition,' and says that Catserman even offered to publish his and Blain's book as a parallel work, but that he refused the deal as he deemed it insulting to the two teams of authors and to Corto Maltese.

I cannot come up with enough superlatives to bestow on Christophe Blain's work, and IDW's rejuvenated, large-format, black and white editions of Corto Maltese have made me a new fan of the dashingly cool sailor, too, so this turn of events is of significant interest to me (I'm trying to be professional here; my interior monologue is more along the lines of 'Christophe Blain!! We could have had Christophe freaking Blain doing a Corto Maltese book!!'). What I find most curious is the apparent disparity in direction not only between the two projects, which is fair enough, but in terms of creative teams. As far as pedigree and name-recognition goes, both Sfar and Blain are on a different level to Canales and Pellejero, which would be a big factor in relaunching/producing new comics for something as widely popular and acclaimed as Corto Maltese. The assumption in getting Blain and Sfar on board for a pitch would be because you know and like what they do, and thus have some idea of what they'd propose as singular artists. While it's not unheard of to get a few people to put together pitches, the ensuing situation seems confused in the least. Poor editorial practice, or a mix-up in communication- who's to know. As it stands currently, it's another one of those intriguing little pieces of trivia to relegate into the annals of 'what could have been.'