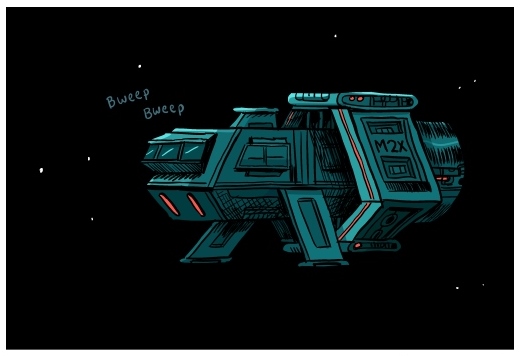 Here's something new and interesting that should be on your radar: Zac Gorman has started a comics project that's nabbed my attention. A space-set, sci-fi story, Gorman began publishing A Thousand Days late last month on a dedicated Tumblr, with only the following intriguing information; 'Hello. This is a webcomic by Zac Gorman. The comic takes place in real time over the course of one thousand days. It began on 07.27.15 and will end on 04.22.18. The robot dies in the end.' Like countless others, I'm a fan of Gorman's comics and art -his Magical Game Time collection is a treasured possession, even with my cursory familiarity with gaming, as is Costume Quest- and so I got in touch with him to discuss his latest comic in a bit more detail, and the negotiability of the robot's fate.

You've started a new web-comic; what can you tell us about it?
The new comic is an experimental thing. Really it's just a way for me to blow off creative steam in the little glimpses of time I have in between projects. The story's about a robot in trapped in a spaceship all alone and slowly dying. I guess more specifically it's about what it does with that time it has left as it's waiting for everything to be over. About that and about how it copes with loneliness maybe. I honestly don't really know for sure yet. I hope that I'll figure out what it's really about as I go. It's the closest thing to an autobio comic that I feel comfortable doing.

A few people were confused about the comic playing out in real time, which means that the time in the comic reflects real life time. 1000 days, brings us to just under 3 years- how much of it do you have planned out? Is all the story there, do you have a cache of updates as a buffer, and then work on more?
The comic plays out in real time for a couple reasons. Primarily this is because I want everyone to know that it's going to end. Definitively end. I wanted to make the death of the main character feel real. Even if I never draw another strip, it still dies. It's still living its life for the next 900 some days even if I don't draw it. When I do get a chance to draw one, it'll just pick up with whatever the character happens to be doing at that time. Secondly, I'm doing it in real time because I don't want to be stuck to a firm schedule. I have very little free time currently but when I do, I thought it'd be nice to have something just to jump back into, but also something that didn't feel stagnant. Nobody wants to continue a story that they haven't touched in a month, but if that story was evolving without you, maybe there's something interesting there. Maybe not. We'll see, I guess.

How challenging has that been? Moving things forward whilst insinuating a lot to what has happened in the comics world that readers don't necessarily get to see?
So far, I'm only a few strips in, so it's been easy! Honestly, it would be really challenging if the comic had a lot of plot or characters, but it's really just the one robot—at least for now—in the one environment.

With the comic taking place in real time, how much thought do you give as to when to update, in terms of maintaining interest and engagement, and also pacing issues?
It's really just a thing that I'm going to update whenever I have the time. As far as those other things are concerned, this is kinda a selfish project, except the part where I'm giving it away for free online, I suppose. This isn't what you're supposed to say, I don't think, but I'm really doing this project for myself. If other people enjoy it, that's great but I'm definitely not doing it with a commercial mindset. I work so much for other people. This is something you should probably only follow if you're really patient.

Will we meet any other characters, can you give us a tiny hint at what may be coming up?
It's really not a plot driven story, so it's hard to give anything away. If I had a goal for the project it's just to really try to endear this character to readers as much as humanly possible. It's like real life, the more people that care when you die probably means you did something right.

Zac, I have to ask- is it writ in stone that the robot must die in the end? He's so cute.
The robot has to die, unfortunately. Fictional characters don't have the same problems as people. They don't age, they don't die, they aren't typically aware of their mortality and even if they are, every time you pick up the book, it's like they're living again (and possibly dying again) for the first time. That's especially true for cartoons. But this robot for whatever reason is stuck in actual time. After it dies you can revisit the comic, but it's more like looking at photographs of a deceased loved one.

I swear I'm not usually this depressing!

Asking for myself (because I loved what there was of it), but also lots of other people who I know are interested, what happened to Escape From Burgertown? Do you have any plans to return to it at some point?
I still like Escape from Burgertown. I've toyed with the idea of doing it as a comic series. Honestly, I've always thought the best media for it would be a traditional pencil and paper RPG for whatever reason. That's how it started its life in my head and I've never gotten over it. It'd probably make a cool video game too. My problem right now is that I have too many projects and not enough time. No matter how hard I work there are only so many hours in a day.

You can follow A Thousand Days here, and Zac's main Tumblr here. 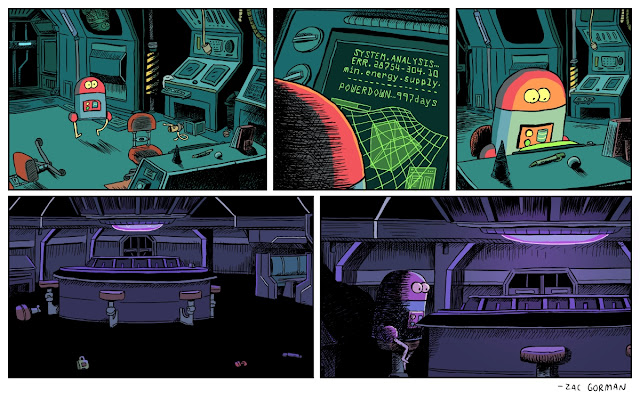 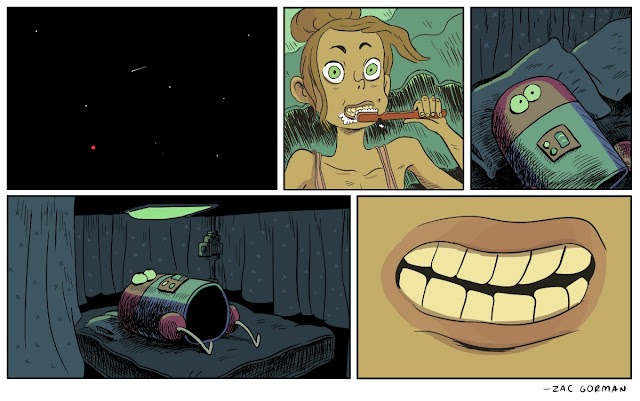