Gotham Academy: adventure and mystery abound as Gotham gets a shōjo Scooby gang 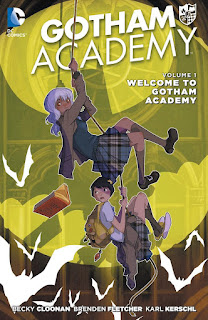 One of the difficulties of working with a large and steeped mythology is the maintenance of balance. Creating a new comic set in Gotham, the city of the Batman, presents its own series of mulling points: choosing what to include, how much you would like to reference what already exists within that world, whether it fits tonally with what you're doing, how closely associated you'd like it to be. With Gotham Academy, Becky Cloonan, Brenden Fletcher and Karl Kerschl have produced a story that is essentially a solidly entertaining boarding school mystery/adventure book. What's clever about it is the expected genre elements such as the ghost, the mental asylum, the monster, etc., have been given a Gotham spin: the ghost is purported to be that of Millie-Jean Cobblepot (an ancestor of the Penguin's), the asylum is Arkham, and so on. This works particularly well because these facets are largely secondary: brought in to facilitate the main, original narrative rather than it being dependent on them; their use is organic, and doesn't feel heavy-handed (were you to remove the 'Gothamisation' factor, the story would still function). As it is, this carefully managed negotiation and pulling in of characters, places and nuggets to serve the story allows the book to assert a clear, individual identity, without labouring under the burden of the Bat.


A new term has begun at Gotham's prestigious boarding academy, but Olive Silverlock is finding it difficult to simply slot in to the role and place she occupied before the events of the summer. The changes she's going through are major -the kind that alter you as a person- but the exact nature of these personally seismic matters is unclear, although it seems related to her mother. She's left with a deep sense of unmooring as things and people that previously felt reassuring seem less so. Olive's somewhat distracted from her worried preoccupation and gaps in memory by  the irrepressible 'Maps' Mizoguchi- -probably her best friend and also her boyfriend Kyle's younger sister, and the only person who doesn't view her differently because of what happened. Maps, so-called because of her affinity with her namesake, rpg's puzzles, live-action scenarios, is adamant they investigate the influx of strange happenings at the school.  Students are jittery about a ghost sighting, the descriptions of which are at odd with the gleaming eyes of a presumably different monster living within the walls. All this in addition to a secret cabal of some sort running around the grounds late at night...


Gotham Academy treads a deft line in tone; it's genial, light, and engagingly suspenseful in the best tradition of Nancy Drew or Mallory Towers (with a dash of Hogwarts) -an amalgamation of mystery and an almost epistolary diary format (the latter by way of internal monologue). Olive's uncertain mindset helps to believably put the  reader in a position of not knowing too much, whilst astutely tapping into a thread that has a directly parallel interpretation of the heredity of illness, specifically mental illness (a theme compounded by Millie-Jean Oswald's diary recountings on the labelled 'madness' of articulate young women). The more general area of young people finding themselves and their paths is interwoven with an exploration of stability and self that spools into a discussion of choice and nature: can you decide who and what you want to be, or is it already writ. A first volume doesn't always leave room for layer and nuance with regards to characterisation, but Cloonan and Fletcher keep things smart by with a relatively tight cast, giving readers a solid feeling for each person via their interactions and dialogue, with attributes and decisions beyond the categorisations of 'good' and 'bad'. Olive's and Maps' complimentary personalities and relationship are at the core of this appealing dynamic, with Pomeline, Colton, Heathcliff, and Kyle rounding out a spirited and determined Scooby gang. 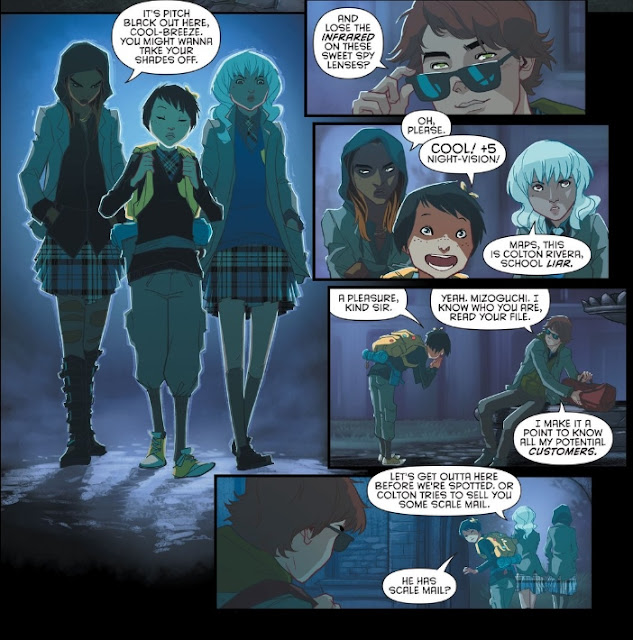 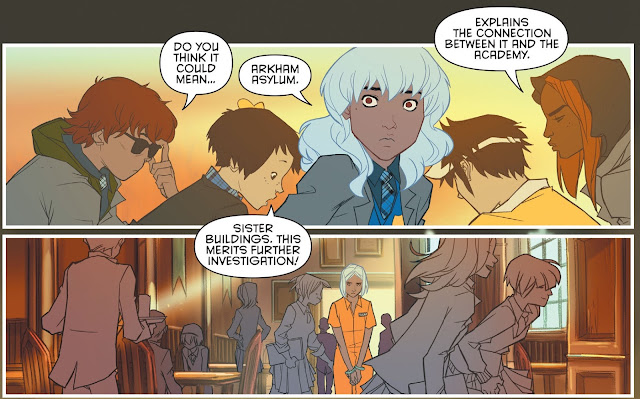 Karl Kersch's art is fundamental in anchoring the simultaneously fun and spooky ambience. In many ways Kerschl's style takes its cues from shōjo manga (the dashing, mysterious Bruce Wayne is straight up shōjo-fodder) particularly in character design and faces, but also in dramatic pacing. Kerschl's fashion-savvy, too, using clothes to infer personality. Maps' pixie cut, yellow backpack, hairclip and shoes are cheerily and instantly recognisable; with her innate confidence it's easy to see why she's quickly become such an emblematic character of the series. Philomena's kick-ass attitude is carefully put together with distressed luxe clothing; Colton exudes a louche, young Matt Murdock air, whilst Kyle operates much like the xenomorph in the first Alien film: the less he's shown, the more you want to see him. Unlike the xenomorph, he somehow pulls off a ridiculous white visor and preppy sports clothes, yet manages to remain attractive, which is no mean feat.

The effort to shake up panelling arrangements and page layouts is admirable, with an eye to injecting dynamism and mood, but often isn't convincingly executed -a cutaway rain spread with magnified/zoomed in panels that doesn't gel, for example, or sudden incoherent diagonal tilts. It's not a huge eyesore, but enough to be noticeable: it can feel a bit emptily frenetic at times. There are strong Batman: The Animated Series leanings later in the book when Killer Croc turns up, the more traditionally cartoony rendering conversely bringing things into sharper focus. It's another wise choice- not opting for the grittier route: BTAS was renowned for its ability to harness emotional depth and resonance and deal with a range of subjects whilst being entertaining and affirming, and that seems appropriately aligned here.

There's often a wariness when companies such as DC declare their intentions to put out a book that's 'fresh' and 'new,' more so, perhaps, when it's linked to an ongoing mythos and the publisher is ideally looking to please readers old and curious. Often the result is a book that gives precedence to the source material, shoe-horning as much of that in first, with some original elements papered over as an afterthought. To that end, Gotham Academy is remarkably baggage-free. It succeeds because it has its own story to tell, and because it's told well. It's to the authors collective credit that it can be easily read and enjoyed by anyone: not requiring an encyclopedic pre-knowledge, nor dragging readers along in service of some larger, ongoing narrative. This first volume is lively and fun; deftly combining a swirl of various genre aspects and Bat-verse influences to rise as a solid school-based mystery/adventure with a distinct identity. I hope it continues down a similar route. 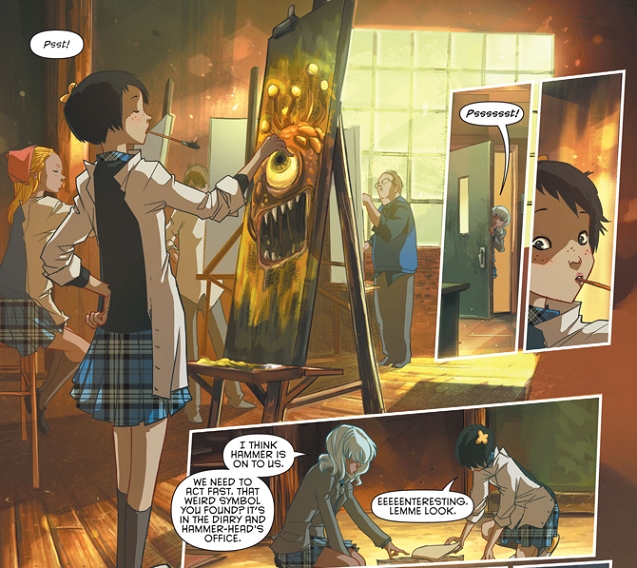 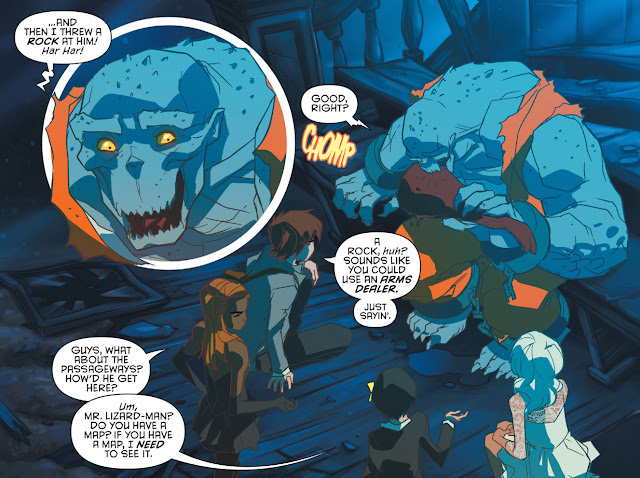