Juliette Oberndorfer's gorgeous 'The woman and the lion' illustration series

It's my duty to share exceptional art wherever I see it, and it's something I like doing on a Friday more than anything: to end the week/start the weekend on a good note. I've been looking at Juliette Oberndorfer's work- there's a collection of the French artist's work here -all of which is worth perusing- but I thought I'd spotlight a series of seemingly connected illustrations featuring a lion and a woman. Oberndrofer is a concept artist, background designer, and illustrator; currently working largely in animation in Canada. You should watch Lux, a beautifully unsettling 4-minute animation about a strange creature caught in a time-loop of actions and consequences, that she created in 2013.

There are 5 paintings in which the lion and the woman appear- a stunning, dreamy set that you could look at for long stretches of time, and into which Oberndrofer intimates so much it feels like you've been on a journey with these images. The meeting between woman and beast is at first tentative and suspicious, and as depicted never truly comes together, although some level of understanding is reached; a connection made. I love several aspects here: the fluidity and layering of shapes, the use of texture, and the colours. The colours, especially, are gorgeously employed. The greens and blues for the lion are an unusual but striking choice; impactful and harmonious, lending him majesty and power in a way beyond expected associations. The lines on his face and mane in the first picture provide depth, movement, and body, and a unique point of interest as his presence fills the sky. The colours get richer and more vibrant in the three 'repose' images: purples, plums, lilacs, shot through with turquoise and aqua, with pops of coral and red that set off just enough contrast. Everything bristles with vibrant life. The colours and layering add to the wonder and density of the jungle in a very simple but effective way. Significantly, the last illustration presents a return to normalcy; an end. The lion is again traditionally brown and in relatively correct proportion; the trees and foliage green. A quiet, sedate beauty. The magic and marvel is over. 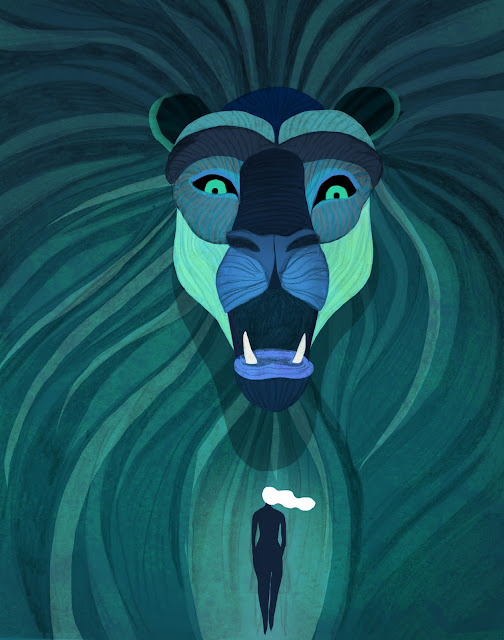 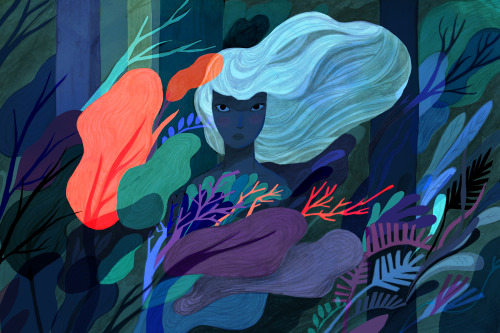 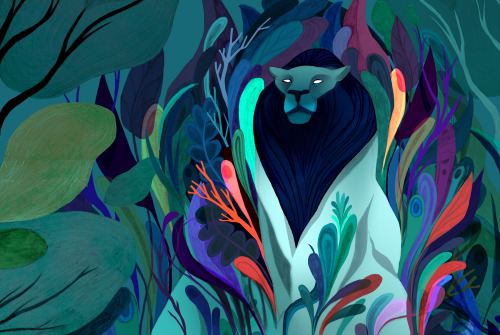 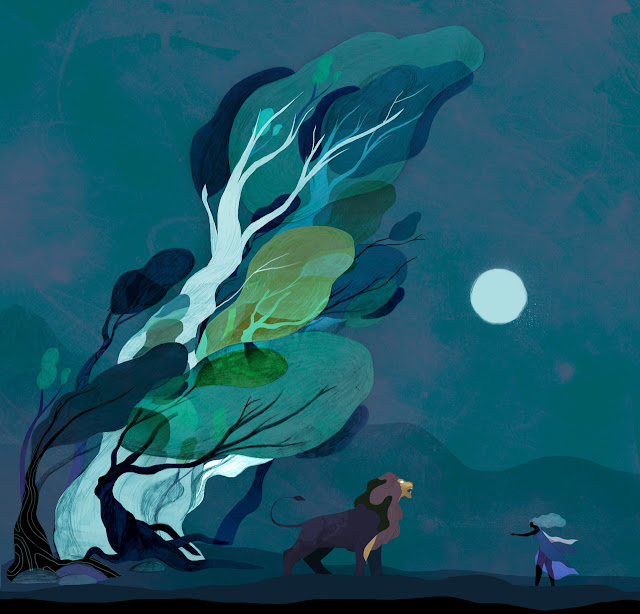