Mikkel Sommer brings Laika home from the stars in 'Limonchik' 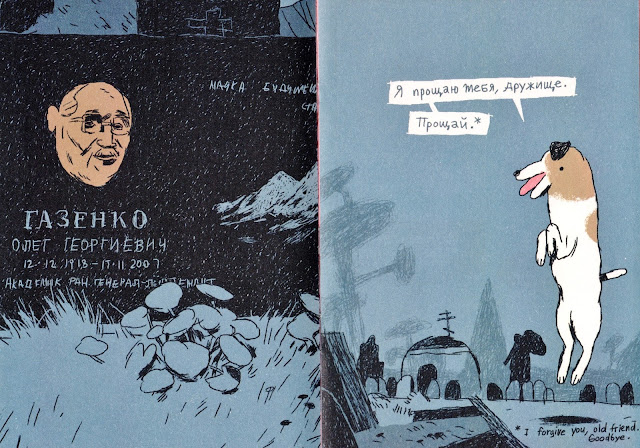 It is curious to think of the place Laika holds in the international consciousness as a cultural icon. The story of the little stray dog plucked from the streets to become the first-ever living animal launched into orbit -and sent to a certain death- resonates with people in a way that the story of an actual person would perhaps struggle to. People are human, with shades of good and bad, with affiliations that can affect perception; belonging to one country or group or another, but animals possess an inherent innocence (one that is at the behest of humans and their intentions) that transcends boundaries and can unite sympathies in a unique manner. Coupled with the enormity and romance attached to man's ventures into space, this helps to explain the endurance and evolution of Laika's cultural resonance and heroic status. She remains a popular and inspirational figure to this day: found on posters and prints, she is featured in song (the Gorillaz Spacemonkeyz remix album is called Laika Come Home); the space-travel Playstation game Planet Laika is named after her, as is the animation studio that made Coraline, Paranorman, and The Boxtrolls; while books from Owen Davey's gorgeous graphic picture album to Nick Abadzis' poignant graphic novel continue to chart her story.

With the launch of Sputnik 2 on November 3, 1957, the Soviet Union were looking to test the safety of space travel for humans, although since technology hadn't advanced to the point where the shuttle could de-orbit, the trip was one-way. It is difficult, even now, to see pictures of the little dog and not be moved by the sight of her photographed alone, clad in a silver suit harness, surrounded by hunks of machinery and wires. To imagine her growing close to, and trusting the people who had taken her off the streets, fed and looked after her; to think of how eager she must have been to please, and reconcile that with her fate. In some pictures she stands alert, eyes bright, on all fours. In others, one tiny paw is extended forward, reaching out and ready. For decades, the Soviets remained tight-lipped about the cause and manner of Laika's death, claiming she passed away painlessly several days after the launch (euthanised by poisoned dog food), until Sputnik 2 scientist Dimitri Malashenkov admitted in 2002 that she died roughly five to seven hours after launch from overheating and stress (her heart was beating at triple its normal rate during the launch), on her fourth circuit around the Earth. 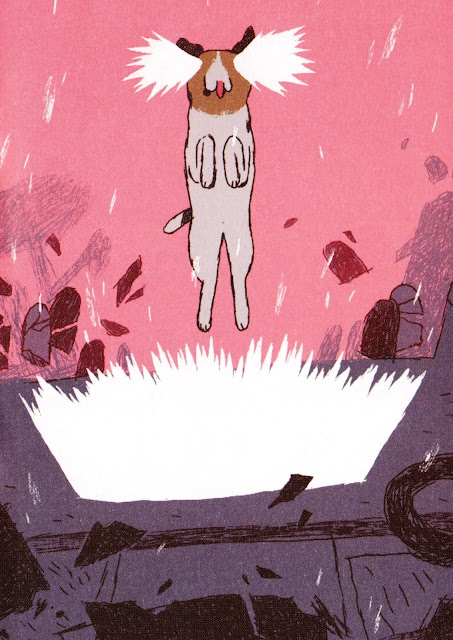 In  Limonchik ('little lemon,' one of the nick-names given to Laika by those that worked with her), Mikkel Sommer sets out to give Laika's story a more befitting, cathartic end. A meteor-like object crashes to Earth and from it rises an impossible figure: Laika. Seemingly imbued with a range of new powers -but looking as cute as ever- she floats/flies through the air to Russian scientist Lieutenant General Oleg Gazenko's grave, he who worked closely with her and later spoke of his remorse and regret over sending Laika to her death: 'Work with animals is a source of suffering to all of us. We treat them like babies who cannot speak. The more time passes, the more I’m sorry about it. We shouldn’t have done it… We did not learn enough from this mission to justify the death of the dog.' In the modern age, man's relationship with animals has been one of dominance, and possession; animals are either viewed with wonder or fear -to be caged or killed, or with a view to utility and benefit. And so Laika returns from the stars, changed: having stopped at Gazenko's graveside to pay some respects, dazzling white beams of cosmic energy shoot out from her eyes as the earth heaves and splits, and buildings begin to crumble...

Sommer keeps things tight and simple over the 28 page length; time and tension devoted to the landing of the ship and Laika's emergence, a misdirecting moment of benevolence and release, then a vengeful, absolute judgement quickly and emphatically delivered. The soft sketchiness of his lines combined with a pleasing pink and purple palette reinforce the humorous subversion of the cute little dog wreaking terrible revenge. Similarly, it's amusing to think of the interpretations that Sommer's slightly sardonic choice of the affectionate nickname 'limonchik' as a title offers. A reminder that lemons -little or not- are sour, and a demonstration of the kind of lemonade served by tiny, angry dogs. 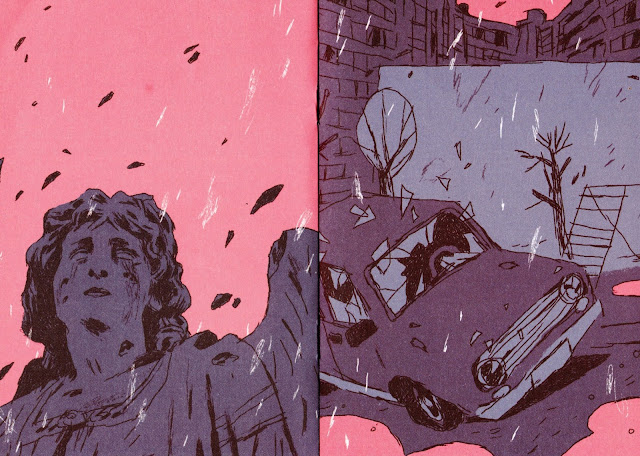