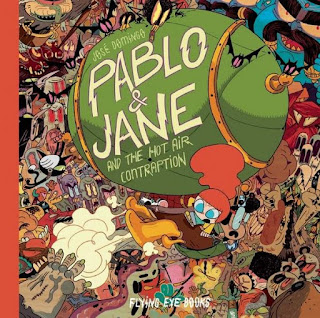 One of the cornerstones of my childhood reading was Usborne's range of puzzle adventure books. A mixture of prose, comics, and choose-your-own-adventure, the series was an interactive experience that combined exciting narratives with problem-solving: searching for vital items on a journey, helping characters through mazes, working out traps, hunting for clues, deciphering codes. Although the illustrations were less sophisticated and intricate in comparison, I much preferred these to search-and-find books such as Martin Handford's Where's Wally and others. In retrospect, the series was also formative in developing and maintaining my interest in comics, and crucial in building a literacy that extended to being able to read both pictures and words -whether separately or together. With Pablo & Jane and the Hot Air Contraption, José  Domingo takes the search-and-find concept, juices it up with his considerable artistic chops, and amalgamates it with a fun, high-octane story.

Bored one evening, the intrepid Jane persuades/drags her less-enthused brother Pablo to cycle out to explore the creepy old house on the hill, having previously exhausted the crooked custodian's forest, the haunted orphanage, the ruined asylum, and the abandoned sawmill. Armed with flashlights -and lockpicks- the house turns out to be a treasure trove of curious and fascinating objects, the most intriguing of which is a strange gold and green machine connected to a number of canisters labelled 'hot air.' As thunder claps ever closer, Jane and Pablo clamber into the contraption to investigate further, and are surprised to discover they're caught up in a battle between the nefarious one-eyed cat, Dr Felinbush, and moustached-mouse and inventor, Dr Jules! To make matters worse, a sudden bolt of lightning sets Dr Jules' hot air machine off, and everyone is suddenly thrust into the alternative monster dimension, with Dr Felinbush quickly scarpering away with the keys.

The narrative, told in traditionally panelled comic format, bookends rich, gorgeously manic double page illustrative spreads.  Each spread travels to a different country (with Domingo taking influence from culture, history and famous figures), showcasing the monsters living there, and offers various objects the reader must help Pablo and Jane to find to fix Dr Felinbush's sabotage attempts and return home. Perhaps it seems obtuse to point out that Domingo's art is what makes this book so irresistible, bursting with fun and life; the energy and vivacity of his figures, colours, and lines make it impossible to not be taken in. Often in search-and-find books, the emphasis can be more on detail and volume than actual style, so it's all the more pleasing to see the originality and variation of character/monster designs and shapes on display. Domingo's figures are neat and sharp; playful, with personality, and his scenes have a sense of atmosphere and mischief. His use of colour is vibrant and wonderful, making each page extremely attractive to look at. It's an absorbing, entrancing journey, with seemingly more to see on each re-visit: forest trolls, circus scamps, rambunctious musicians, castles full of creatures, an arena of gods, bustling markets, the land of the dead, lush sweltering jungles, golden deserts.

For those who don't want to find the objects, or for younger children who may get bored of doing so, there's plenty going on each page and spread to simply look at and build little narratives around, as a continuation of the main story.  The book reads well on both levels: as a  comic and picture book, disregarding the search-and-find adventure aspect, or incorporating the two. What's nice about that is it means it can be enjoyed independently and with assistance; after an initial read-through and hunt for the objects together, my 5-year old nephew later quietly pulled it off the shelf to pore over. Domingo's created a delightful, lively book, one that's appealing, engaging and fun, and successful in all that it sets out to achieve. 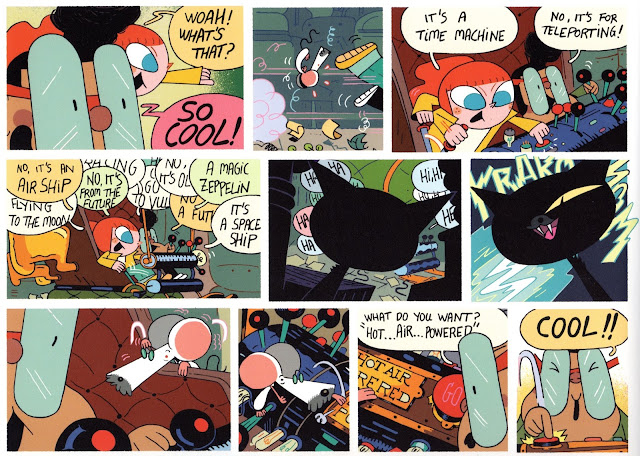 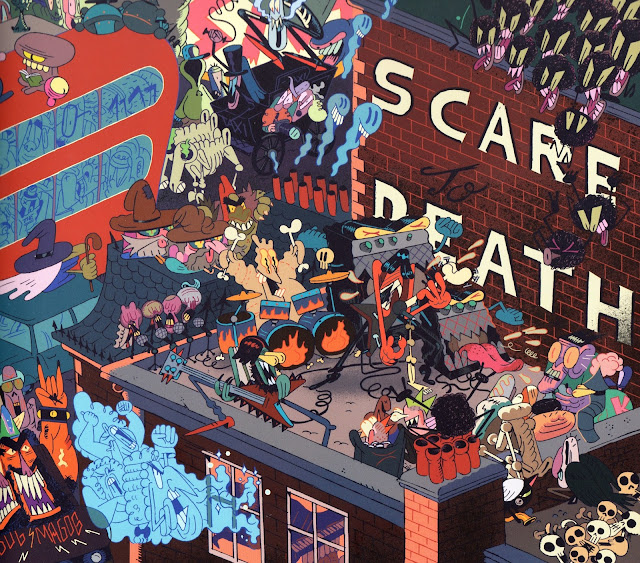 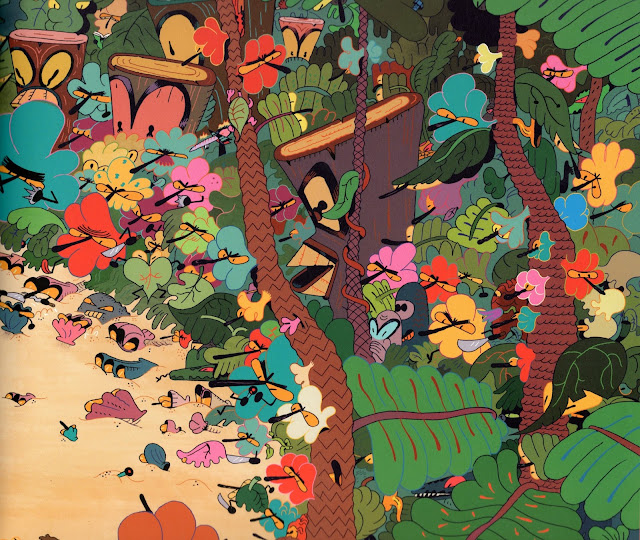 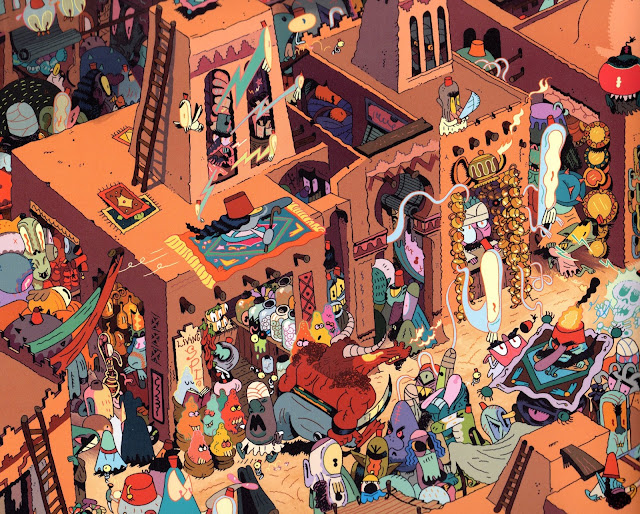 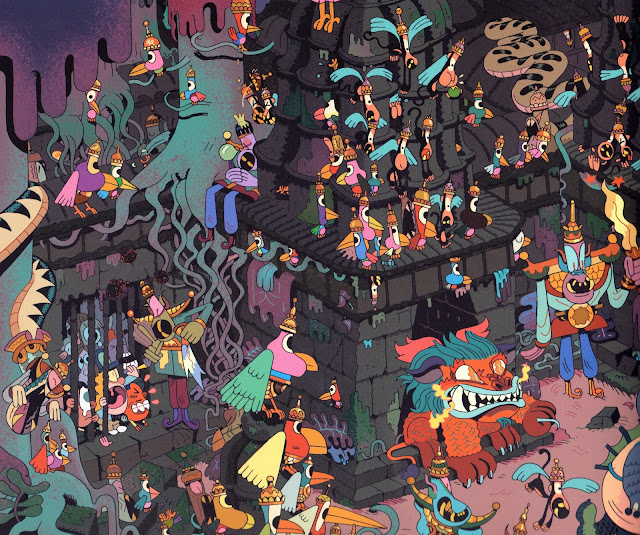 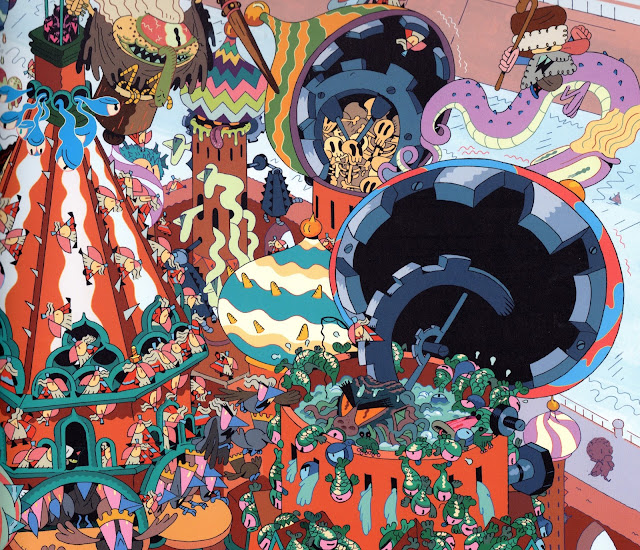