With pound in hand: September comic and graphic novel releases

Here we go- picking out the cream of this month's releases, in graphic novels, collected editions and anything else notable. 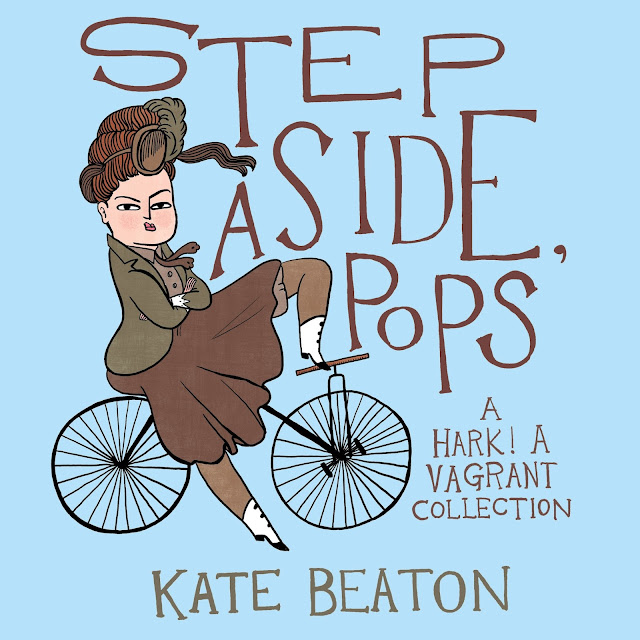 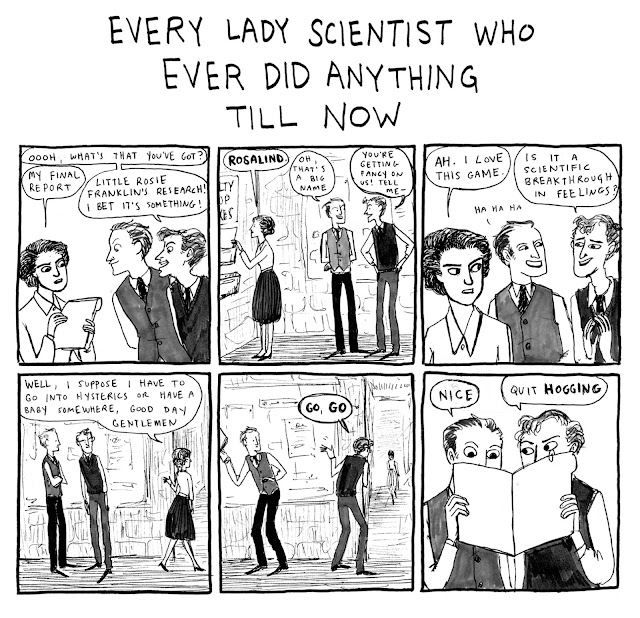 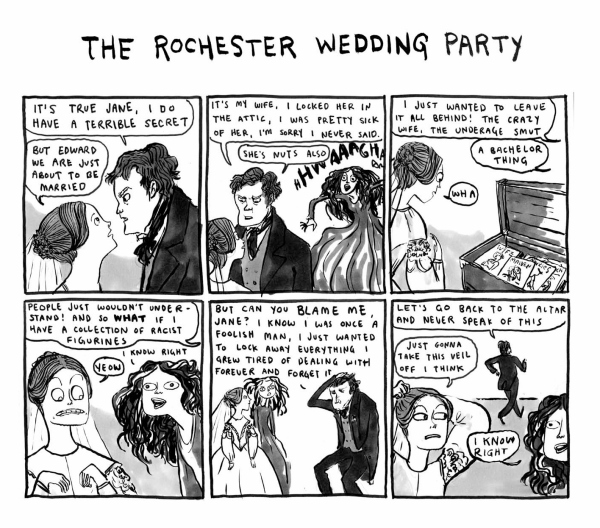 PICK OF THE MONTH: Step Aside Pops by Kate Beaton, published by Drawn & Quarterly: It can be easy to overlook  or take for granted artists who are consistently good, and recognised as such- what new things are there to say about the brilliance of Kate Beaton's cartoons for example? But for those people who don't follow Beaton's comic updates on her website and Twitter (and those that do), there's a new collection of her comics available in print this month courtesy of D&Q, four years after the runaway success of Hark! A Vagrant, which spent 5 months on the New York Times bestseller's list and was received to great critical acclaim.. Since then, Beaton's taken taken a careful and considered approach towards her career, only publishing children' picture book, The Princess and the Pony, last month. So another collection of her smart and witty comics featuring literary, feminist, and historical figures which mix together humour and facts with a dollop of artistic license and expressive cartooning can only be a good thing for everyone involved. 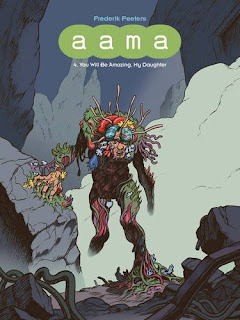 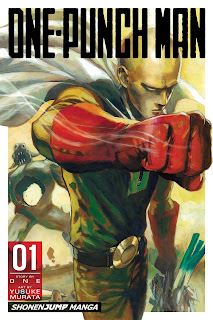 Aama vol 4: You Will be Glorious, My Daughter by Frederik Peeters, published by Selfmade Hero: The fourth and final volume of Frederik Peeter's sci-fi quartet is out now and I'm curious to see how it all ends. The series so far has been solid with exceptional moments (a mention here for cool monkey-robot, Churchill) and probably the most striking art of Peeters' career -no mean feat when taking into account the calibre at which he operates. Much of it has trodden familiar science versus theology ground although it's remained interesting, but the completion of the story will allow for a better gauge of how it all stands. I'm certainly looking forward to the visual feast, if nothing else. 'On Ona(ji), Verloc Nim is the sole survivor of an expedition to recover Aama, the experiment that has transformed the surface of this desert planet into a landscape inhabited by lethal biorobotic creatures and plants. Having pieced together the events of his recent past - his journey to Ona(ji), his part in the deadly expedition to Aama's source - Verloc finds himself physically transformed by his confrontation with the experiment. But will his extraordinary new powers be enough for him to save his daughter?'

One Punch Man 1 and 2 by Yusuke Murata and ONE, published by Viz: One Punch Man looks all set to be the next big hit with English-language reading Japanese comic fans, having already done very well in its native country and via digital. I wrote more about why I was excited for this a couple of months back when the print volumes were announced, but essentially it looks like an entertaining comic with humour and heart - as shilly as that may read on paper. Hopefully, I'll be able to report back with a review soon. 'Nothing about Saitama passes the eyeball test when it comes to superheroes, from his lifeless expression to his bald head to his unimpressive physique. However, this average-looking guy has a not-so-average problem - he just can't seem to find an opponent strong enough to take on! Every time a promising villain appears, he beats the snot out of 'em with one punch! Can Saitama finally find an opponent who can go toe-to-toe with him and give his life some meaning? Or is he doomed to a life of superpowered boredom?' 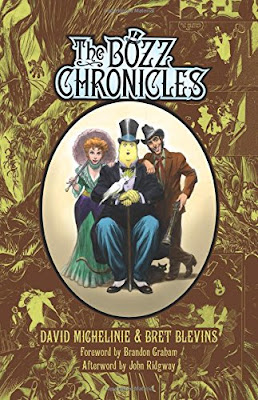 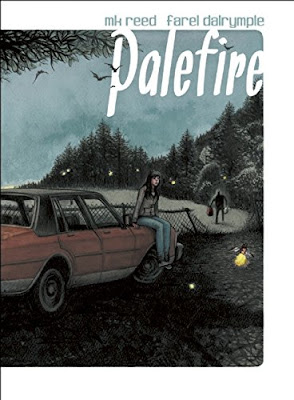 The Bozz Chronicles by David Micheline and Bret Blevins, published by Dover Street Press: A six issue comic series published by Epic Comics in 1985, The Bozz Chronicles sounds like a small, oddball, known-affectionately-to-a-few-hundred-people-only affair that may just be right up my street. Written by David Micheline with art by Bret Blevins, it features a suicidal alien and a plucky prostitute in Victorian England who band together to form a detective agency that accepts cases rejected by Scotland Yard. If that line alone isn't going to sell you, I don't know what will. This is the first single-volume publication of the cult favorite, which includes a bonus pin-up by Brandon Graham, who also writes the foreword.

Palefire by MK Reed and Farel Dalrymple, published by Secret Acres: A new release from Secret Acres (most likely debuting at SPX, I would think), I don't know much about this apart from that it's a YA-orientated book that's on my radar because it's illustrated by the excellent Farel Dalrymple, and written by MK Reed, which makes it worth checking out. 'Everyone hates Darren, the firebug, the bad boy trouble follows everywhere. Alison finds a warmth to Darren, a spark everyone's missing. When you're not a girl and not yet a woman, the last thing you want is advice. The road to hell may be paved with good intentions, but everyone deserves a second chance—even if it goes up in flames.' 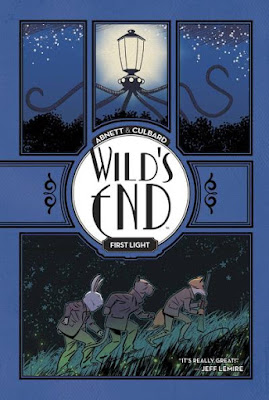 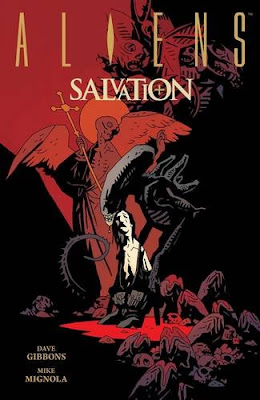 Wild's End: First Light by INJ Culbard and Dan Abnett, published by Boom!: This collected paperback release of Abnett's and Culabrd's Wild's End coincides with the serialisation of a new story (The Enemy Within) that picks up where the old one left off. The First Light volume compiles the six issues of the mini-series, a re-working of H.G. Wells' The War of the Worlds by way of the animals from The Wind in the Willows. A descriptor like that can sound iffy at best, but having exercised caution in approach and bought each issue as it came out, I can attest to its quality and general goodness, most notably Culbard's finest art to date, the highlight of which is some sublime colouring choices. It may sound like a random mash-up but it manages to be have an identity of its own whilst maintaining the essence and iconography of Wells' seminal sci-fi tale. 'Lower Crowchurch is a small English community enjoying the peace of the 1930s, but when the town becomes the victim of an alien invasion, the residents’ lives are upended by the harsh realities of life-and-death violence. Led by the town’s outsider and retired war veteran, they will have to rally together to uncover the secret of their invaders and hope to fight back.'

Aliens: Salvation by Mike Mignola and Dave Gibbons, published by Dark Horse: A new, hardback edition for the out-of-print Aliens: Salvation this month; a Dave Gibbons-penned, Mike Mignola-illustrated story originally published in 1993. Unlike Mignola's earlier 90's work with various publishers and properties, this finds his art more pulled together into the recognsiably distinctive style that would go on to make him one of contemporary comics foremost cartoonists. From my reading of this last year, the one thing I vividly recall is Mignola's and inker Kevin Nolan's art: the depiction of the xenomorphs as slick, swift terrors, this unnatural yet natural force once again given menacingly strange presence, a facet that I feel is gradually distilled from movie to movie and lost completely in a lot of Alien comics. That mythic, demi-god beast status is reinforced in the manner Gibbon's religious protagonist reacts and interacts with the aliens. 'Selkirk, a God-fearing crewman aboard the space freighter Nova Maru, is forced at gunpoint to abandon ship with his captain. They crash-land on a small planet, but it is soon apparent that they have not entirely escaped the Nova Maru's dreadful cargo.'
Posted by Zainab at 00:26