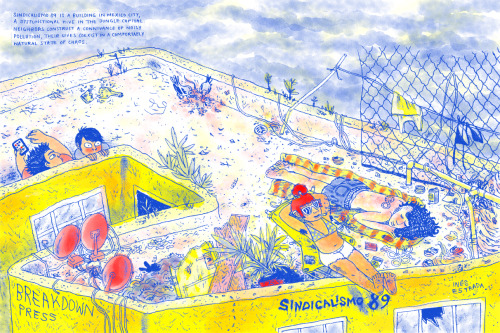 It's been a while since the last comics shelfie, the reasons for which have been a mixture of my busyness and not having the time to reach out to people, and also the cartoonists who I'd like to see featured on here being a lot busier then I am. The comics shelfie feature relies solely on cartoonists' time, goodwill, and participation to exist, and I'd like to reiterate how grateful I am for that and to everyone who has contributed. Hopefully, I've got things lined up to a point where it can have a regular slot and gather steam once more.

Today, it's the excellent Inés Estrada who is showing us around her book and comics collection. I've written about Estrada's work quite a bit, so I don't want to regurgitate what makes her such a good artist (I feel like the effect of repetition diminishes), but will instead simply direct you to her website to find out more, and her Tumblr, which I find the easiest way to keep up with what work she's putting out. I'd also like to point you towards a couple of her newer comics which are available to read online, in full and for free: the first is Sindaclismo 89, which she published with Breakdown Press, and the second is this short comic she did recently, featuring a bicycling raccoon which I really enjoyed. Over to Inés for the good stuff:

'Hey! What's up, welcome to my room... I just moved to Texas this year from Mexico City and left most of my book collection in boxes at my mom's house like I guess anyone with a mom does once they move to another country. 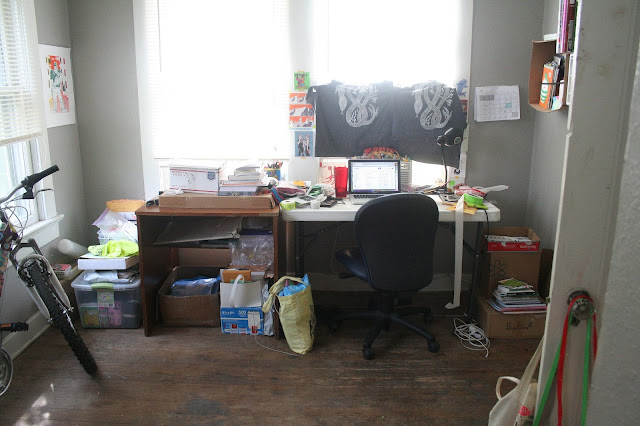 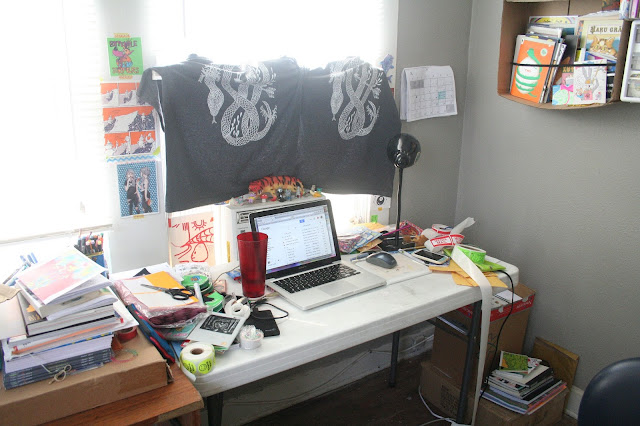 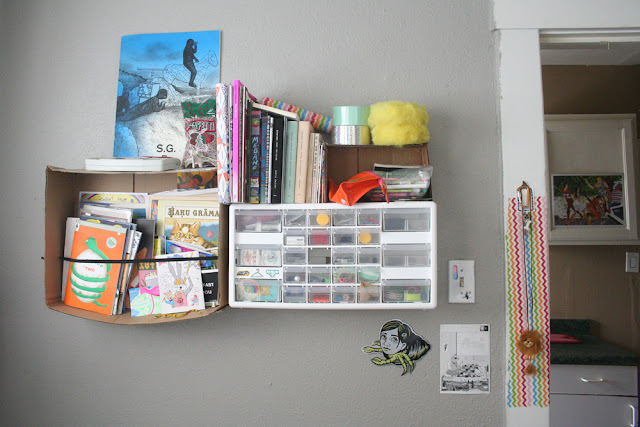 Books are one of my favorite things and I really miss all my books! I love looking at them, reading them and making them... so naturally I already managed to scrounge up a stash at my new place. This the main place I keep them at... yeah, that's a box I just nailed into the wall! 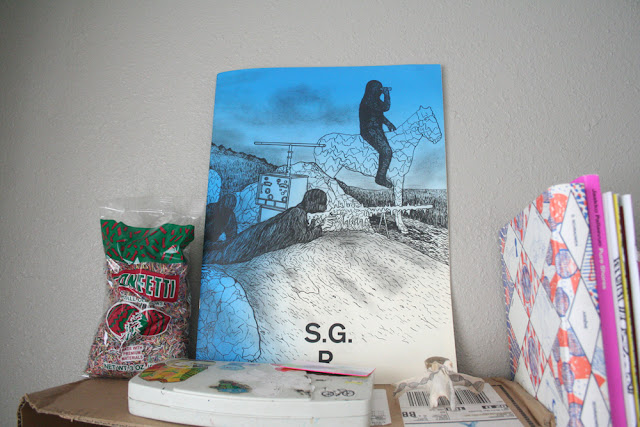 On top is this humongous book I got from Helge Reumann, whom I had the pleasure of meeting at a residency in Minneapolis called Pierre Feuille Ciseaux. It's a collection of silent black and white strips about an apocaliptic wasteland that might as well be our future. The printing is offest and it's beautiful, the insides were printed with black twice and the ink does come off as a very deep black. 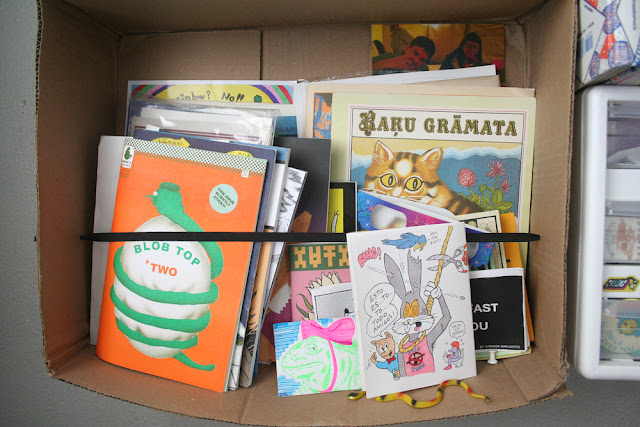 Check out that box I nailed to the wall! I keep mostly zines in it and random paper stuff. On the left is Seth Scriver's latest comic, Blob Top Magazine #2, published (and also beautifully printed) by Colour Code. There's a Charles Burns notebook peeking out, a drawing of an Iguana a friend made for me and also this birthday card my partner Edwin gave me, with a suicidal Bugs Bunny. Also peeking behind is one of my favorite books, "The Book of Cats" by Edgars Folks. 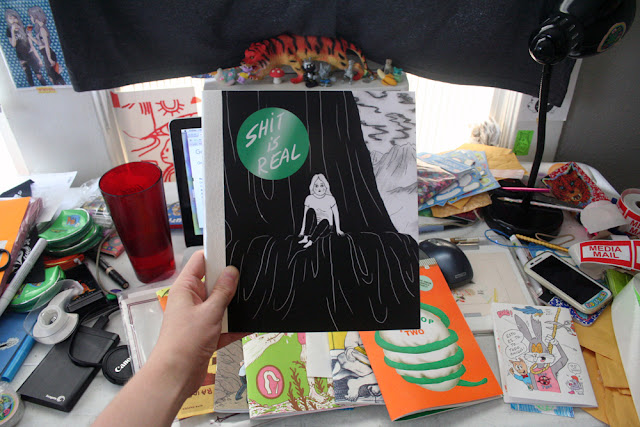 Another favorite is the first issue from Aisha Franz' new series Shit is Real. It's about heartbreak and the future! It's awesome and I can't wait to read the next issues. Aisha always manages to merge beautiful art with honest, complex stories and it's always really gratifying to read her work. 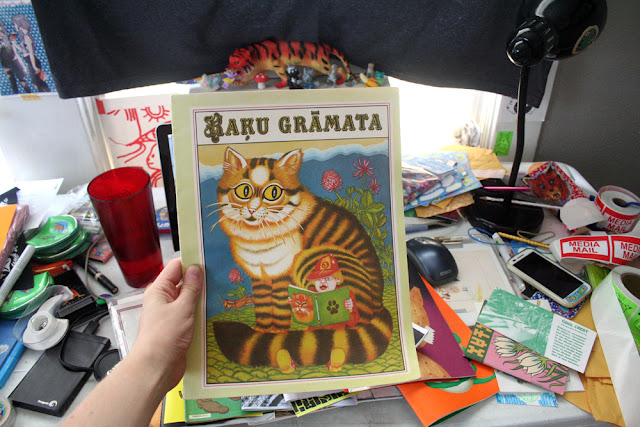 I found this at a used bookshop in Latvia that Sanita (the co-editor of the awesome Latvian comics anthology Kuš!) took me to. Inside it's all trippy illustrations of cats made by this Latvian artist Edgars Folks. I love it! 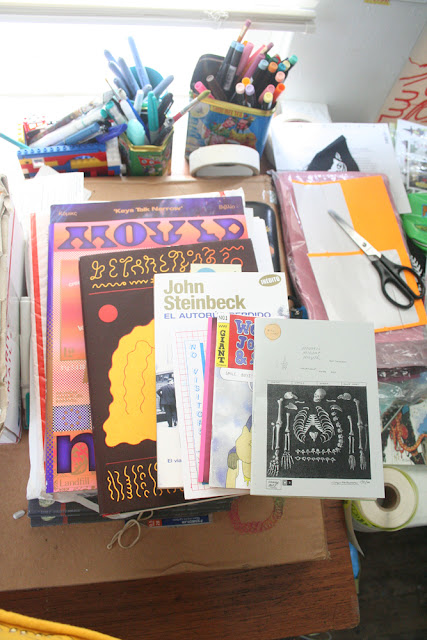 Here's a look at my "currently reading pile". Just got the newest zines from the Gilmore Boyz, aka Grant Gronewold and Simon Hanselmann. Looking forward to reading that and having some sad laughs. Below there is this novel from John Steinbeck I'm half-way through reading (in Spanish, because I get tired of living in English!), then the newest desirable European anthologies: Mould Map and Volcan. I have finished reading Volcan but to be honest the content doesn't match up the the book itself as an object. It is a beautiful book to hold and browse, but some of the comics were a bit lacking, not only in story but also visually... even in spite of the nice printing. It does have some good stuff like some of my favorite current cartoonists (Oliver Shrauwen, Aidan Koch, Baptiste Virot, Carlos Gonzalez) and also an awesome reprint from Fletcher Hanks. I can say it was still a good acquisition. Mould Map 4 is really great and keeps up with the quality and futuristic vision of the previous issues. This one is specifically about Europe and I think takes a very particular, but also broad look at the subject which is refreshing. I've already read all of it, but I keep flipping it again and rereading some parts. The comics are good, my favorites were from both Sadler brothers, Brecht Vandenbroucke and Roope Eronen. Unexpectedly, what I enjoyed the most were the interview with Ingo Niermann (whose work I didn't know before) and the article about Frigidaire Magazine from Italy. 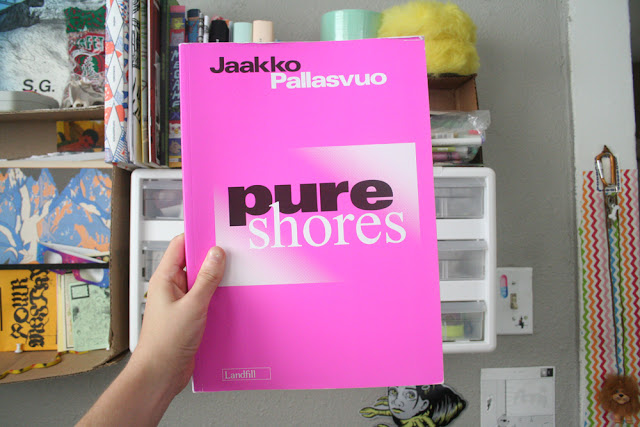 Another thing I just got from Landfill Editions (who put out Mould Map): the new comic from the Finnish artist Jaakko Pallasvuo, Pure Shores. I was super happy when I heard Jaakko had returned to making comics and this lived up to my excitement. His drawing style now is a lot more loose, but it works well for the story, which has a very passionate pace. It's about a love story in the future! Which I guess is a theme now? I'm working something in that vein for my next comic so it's very enriching to see what other people are doing with such concepts. 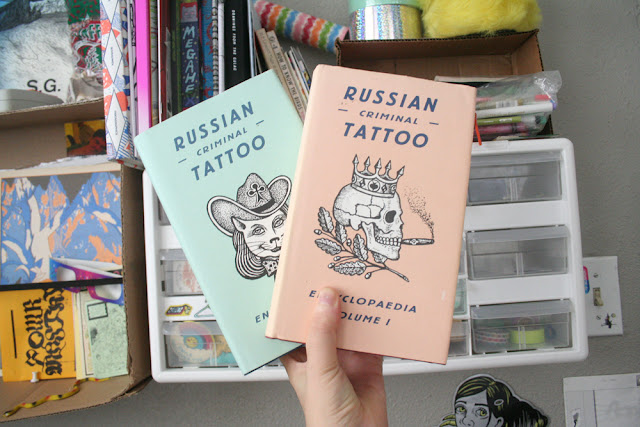 Also on top of my plastic drawers I have this collection of Russian tattoos from Fuel. It's really interesting to read and fun to look at. I flip through these ones often. 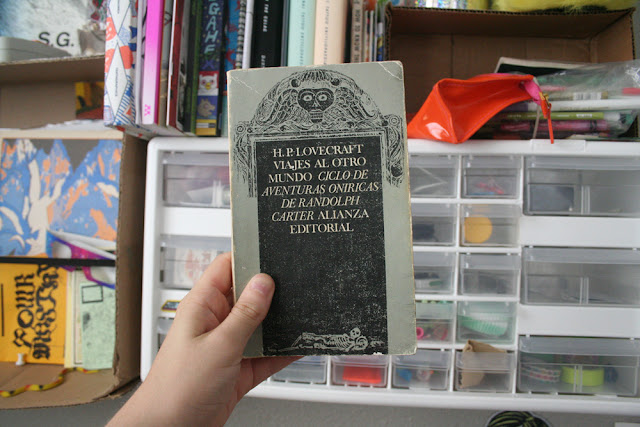 One of the few things I brought with me from Mexico, this H.P. Lovecraft book that belonged to my dad in the 70s (it has his name on the inside cover!) It's a collection of short stories featuring this dimension traveling character, Randolph Carter and it's really good. 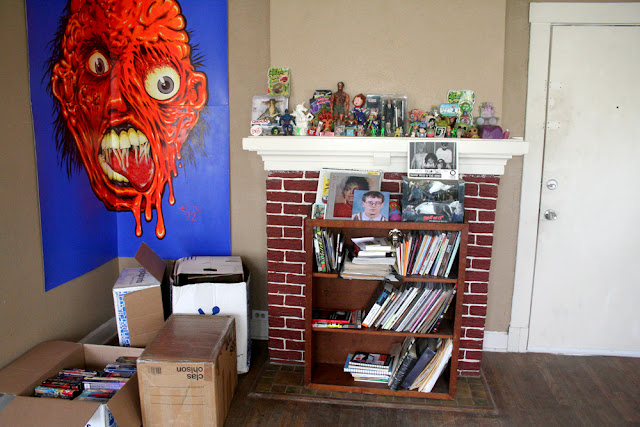 This is our living room. Most of the stuff there is Edwin's. He also painted that melting guy, the orange is actually neon so it's really intense! I love it. You can also see I sneaked in this iridescent unicorn figure I got at the thrift store in his toy collection hehe 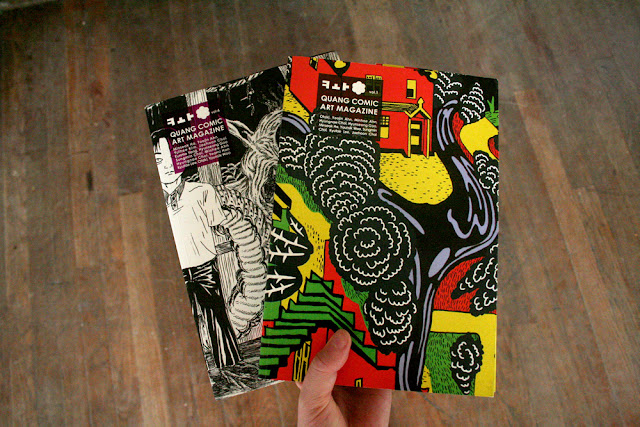 I keep a few books in the bookshelf here that don't fit in my room. This is a great anthology from South Korea called Quang Comics. The way the books are made is really cool, they have some french flaps that you have to tear to open the book when it's new. The content is in full colour and also pretty good, I can't read the comics but luckily many of them are silent! One of my favorite artist in both of this issues is Lee Kyutae.

That's all for now! I got really into this. Thank you for reading and thank you Zainab for inviting me to talk about my books!'

A massive thank you to Inés for her time and participation. You can view all the previous installments of comics shelfie here. Next installment will be up in a month.
Posted by Zainab at 10:15