'Ghost' by Whit Taylor: finding a new self in an irrevocably changed world 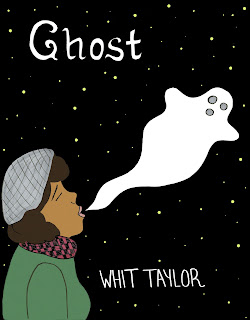 
Whit Taylor's new book, Ghost, sees her cartoon persona presented with the opportunity to spend a day each with any 3 people -dead or alive- of her choice. The only stipulation: she's not allowed to ask them about the manner or nature of their death. These 'ghost' encounters share a thematic thread of an interest and wonder of life, and ways of living; how and why people/things change and evolve; adapt and survive. It's an oft-visited scenario, but Taylor is too interesting a cartoonist to offer a straight, staid interpretation of it; the expectation is that she's building to something and that promise is fulfilled.

Her first meeting is with a rather beleaguered Charles Darwin: 'Why is it that people bypass the well-established rule of not discussing politics or religion when they first meet me?' with whom she talks evolution and the theory of 'punctuated equilibrium': the idea that species experience a series of rapid changes -often caused by external forces- resulting in an entirely new species. Her second visitation is with mythologist and writer, Joseph Campbell, best known for coining the term 'follow your bliss' and extending the concept of the monomyth, surmised by a pattern referred to as 'The Hero’s Journey.'  The hero's journey is purported to be reflective of all people and stories; a cycle that involves trials, tribulations, and learning. This again results in the hero being fundamentally changed as a form of adaptation: in order to implement their new self, knowledge, and attributes unto their changed circumstances, therefore helping themselves and others. Taylor's final meeting, however, takes her to an unexpected subject, one she didn't ask to meet, and one that casts greater significance on the conversations that have taken place.

Taylor's art is clean and cartoony without ever devolving into the cartoonish;  it carries the transitions in tone seamlessly and consistently, and that clarity keeps the various segments from getting knotted. There's an immediacy and openness to the coloured markers, an easy appeal that helps to better digest information being imparted.  There are 2 stories slotted in between each encounter: the first of an old lady living in a care home, and the second a silent tale in which a young girl finds a wounded bird. It's truly a testament to Taylor's ability that the inclusion of these doesn't lead to overkill or convolution, instead (as is recurrent throughout the book) their meaning is divulged in layers as the interlocking stories shed further light on each other. There are lots of little touches to enjoy: the attention to presentation and stylish outfits she chooses to wear; the variety of layouts and approaches that sustain interest; the realness of Taylor's facial expressions, the undercurrent of measured passion that bursts through whenever a point is being keenly felt.

Ghost is a smartly executed comic. Taylor blends a hybrid of genres, combining fact, fantasy, fiction, and autobiography to create a book that reads as both informative and empathetic. There's a sophistication in the way Darwin's and Campbell's teachings are introduced and then transposed onto a more personal narrative of surviving sexual assault and its traumatic aftermath. Taylor uses the people she looks up to, and science, history, and lore to help make sense of what happened to her, and as a means of re-anchoring into an irrevocably altered world. Beliefs and literature that are meaningful to her work to aid in reassuring and realigning her changed self. One of the most difficult aspects of violence and assault is the loss of control and self, of being changed- although not through independent choice. The wholeness of the person you were before is gone forever. Parts of you die and can never be regained. After questioning her existence and worth, Taylor gradually evolves to emerge as something new; someone who can find purpose and value in life and herself. Stronger seems a redundant and misleading descriptor: she's just different, but also the same, still her, but more and less in many ways. A person. She is the hero who overcomes and triumphs. 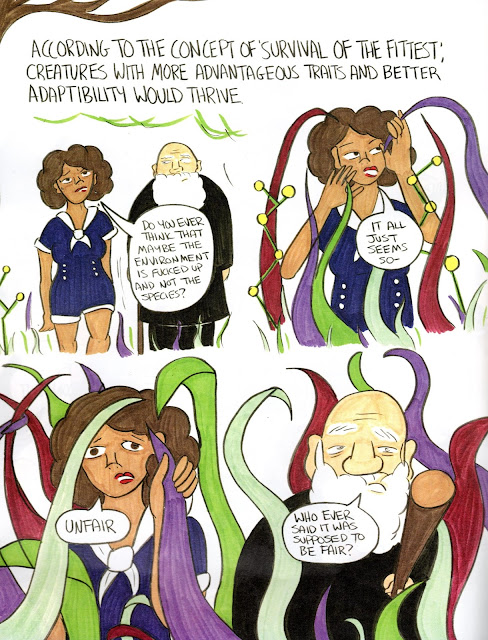